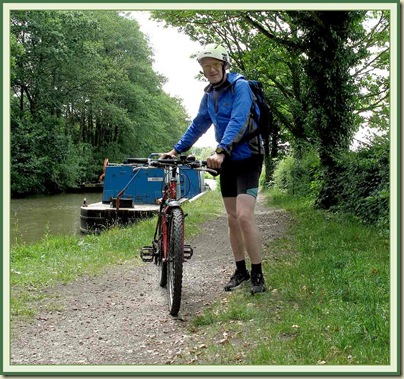 I was about to commit myself to a trip involving quite a bit of time on a saddle.

‘Better check that I stand a chance of doing it’, I thought.

So on Thursday morning I rose early and embarked on a little bike ride.  This is a very brief report, due to time constraints, but there’s a link to a pictorial journey at the end of the posting.

Anyway, early morning beside the Bridgewater Canal was the province of wood pigeons, foxes and herons… and this lone cyclist who surprised a dog walker in Lymm.

About every three miles I encountered a pair of swans, only 50% of them with young.  Deeper into Cheshire a pair with eight youngsters steadfastly tried to block my way down the towpath.  There was no way round.  They were intimidating.  I managed to use the bike as protection, keeping it at arms length and quickly passing the hissing birds.

At home the towpath is quite smooth and easy in dry conditions.  In deeper Cheshire it becomes very bumpy and grassy.  Very much an ‘off-road’ experience.  Well, virtually my entire route was off-road, though I don’t believe Anquet’s calculation of 1500 metres ascent to be correct.  There may have been 92 locks, but assuming half of them were downhill, that would give an average height gain per lock of over 30 metres!  And the hills over the tunnels weren’t that high either.

Nevertheless, ‘off-road’ is off-road, and the day’s hazards included deep grass, wet grass (it rained for an hour), paths imbued with thousands of tree roots, and numerous ‘anti-bike’ gates, all of which slowed progress.  I only noticed one ‘No Cycling’ sign (in Marple Bridge), and perhaps some of the gates are there to discourage motor bikes rather than cyclists.  Anyway, I soldiered courteously on along the towpath with no complaints at all, all the way to Piccadilly in Manchester, where work on the canal resulted in a diversion down Whitworth Street to rejoin the canal system in Castlefield.  Or did I simply lose my way – it has all gone a bit hazy!

As an aside (Jamie may be interested) the towpath between Castlefield and Altrincham is very easy – it would take about an hour to commute to town from Altrincham, which is about how long it used to take me by car, though the tram is somewhat quicker.

Conditions were relatively benign – cloudy, only occasionally hot and sunny (not good), light winds (why do they always seem to be headwinds?), not much rain, dry paths (apart from in the rain), minimal route finding difficulties (I got misplaced twice going around tunnels, and became confused at other times!), pleasant waterways lined with wild flowers and chirpy birds, etc, etc.  Not forgetting the thorns that delayed my progress for over thirty minutes just after lunch at the appropriately named ‘Fool’s Nook’.

I’d estimated a pace of about 8 mph.  That would have meant 13 hours 20 minutes.  I’m usually pretty conservative with such estimates, and I normally cycle at around 12 mph on our local towpaths.  In the event I probably spent that amount of time in the saddle.  It gave me a sore bum.  So it’s not surprising that after taking a few voluntary (lunch, chats with cruisers, walkers and other cyclists, etc) and involuntary (puncture repairs) stops, it took me just over 15 hours to complete the whole enterprise.

Still, I was back at home well before dark, and in time for dinner, with plenty of energy in my legs and no pain from my back and shoulders (I was worried about that).  The sore bum is now better and the only lasting after-effect is two numb fingers caused by frequent use of the very stiff gear change on the old bike.  You may think canal towpaths are flat, but this trip required a phenomenal amount of gear changing!

Later, I committed to the trip referred to in my opening sentence, by purchasing the tickets to get there.  Did I pass my self-imposed test?  I think so, Markus.

My pictorial journey (47 images) is here.

And here’s a map for those not interested in the pictures: 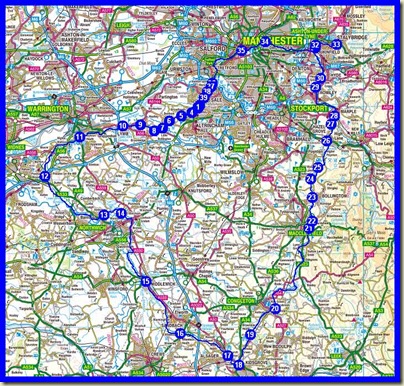