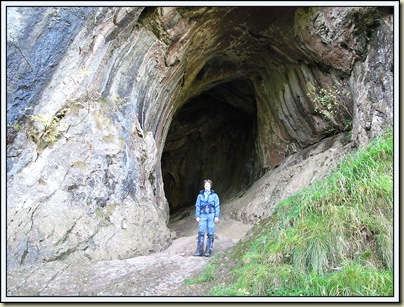 This cave was created over thousands of years by the effects of water and wind on the limestone rocks formed from layers of dead marine animals between 280 and 360 million years ago. The area was submerged under a shallow, warm sea near the equator, and the hill would have been like a tropical reef.

The name may be a corruption of ‘tors’ (meaning hills), or it may come from Thor, the Norse god of thunder.

Around 20,000 years ago the huge cavern would have been used for shelter by both humans and animals.  Bones of bears and giant red deer have been found in the area, and Thor’s Cave is the site of a Bronze Age Burial.

Sue and I visited it yesterday.

Not been down that way yet -- is this in Dovedale?

Martin was over this way yesterday (Thursday 7th), and we enjoyed a great circular walk starting in the Goyt Valley at Errwood Reservoir, and taking in Shining Tor, Shutlingsloe, and Axe Edge. Essentially, a circumnavigation of the Cat & Fiddle Inn. Bad planning there really. Next time I'll make sure we drop in for an ale :-)

Will try and put together a quick write-up today...

It's the Manifold Valley. We went on a recce for the Xmas walk (12/12). Hope you can join us. More info to follow.