Sunday 12 December 2010 – A Stroll from Wettonmill 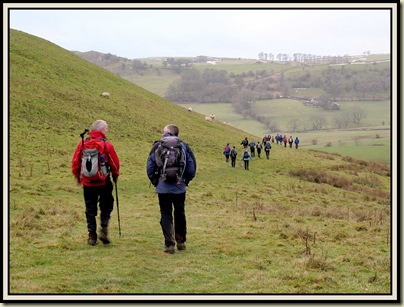 The previous Sunday, the Manifold Valley had been engulfed in snow, with temperatures lower than –10C.  During the week a slow thaw had freed up access, but early arrivals for this walk were still able to enjoy driving down the ‘toboggan run’ from Butterton and recover from the ordeal with coffee in the café.

Then our Health and Safety officer, Notchy, arrived to put a stop to such frivolity.  Our car duly turned round and took the easy route through the long single track tunnel to the south of Warslow.

Luckily the large lay-by at Wettonmill was free enough of snow to permit parking.  We duly filled it with cars, some 24 folk having turned up for this annual event, including a few who either hadn’t been on a walk with us before, or hadn’t appeared for rather a long time.  It was great to see you all; thank you for coming.

It’s a fairly short walk from Wettonmill, down the Manifold Valley to the climb up to Thor’s Cave, where the assembled masses could explore the magnificent cavern and enjoy a choice of CCS or fudge brownies, or indeed both, with their elevenses.

Viewers of BBC’s Countryfile programme will have benefitted from the comprehensive analysis of this area by a sheep farmer in the previous week’s episode.  It still seems amazing that this huge cavern, high above the valley, was formed by a river, millions of years ago. 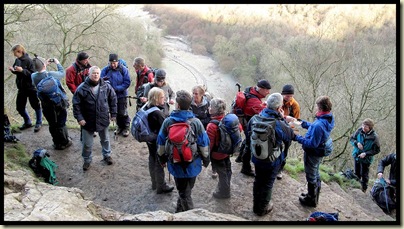 The place has a rich history.  Some 20,000 years ago bears and red deer would have sought refuge in the cave, but by the end of the 19th century it had become a tourist destination.  It was served by a railway station on the Leek and Manifold Valley Light Railway some 80 metres below, between 1904 and 1934, and in 1988 a memorable film, The Lair of the White Worm, directed by Ken Russell, was shot on location here.

We trotted back down to the valley path, and emerged into bright sunshine near Weags Bridge.

After this, all bar two of the assembled mass met the challenge of the steep path through vibrant gorse bushes that short-cuts a hairpin on the road.  Well done!

Below Wetton Low, a slithery path contours beautifully above the Manifold Valley, with fine views back up the valley, and also to the south east towards Ilam, former home of the Watts-Russell family.

After a while we turned into a biting breeze towards Hopedale, prior to which a freshly muck-spread field gooed up our boots.  So instead of heading straight for the pub (we were surprisingly early anyway), a convoluted route was chosen that enabled us to reach the warmth of the Watts-Russell Arms a little before our planned 1pm target.

Phil (the 25th member of our party – feeling ill, but not poorly enough to miss out on a pub meal) had been in residence for some time.  Our group basically took over the pub and enjoyed Chris and Bruce’s beer and food.  It’s always a bit of a concern, taking 25 people to an untried venue, but I think everyone enjoyed their meal.

After nearly two hours in this pleasant spot, chatting about important matters like TGO Challenge routes (Mick and Gayle are reserves – their route is fully planned; I have decided to start with novice Mike from Oban and have a rough plan in mind; Graham hasn’t decided on a start point for his 21st crossing), and inserting comedic answers to a little quiz that I had set, as well as catching up with all those we hadn’t seen for some time, we set off again, in the direction of Ecton Hill.

It was a pleasant afternoon, though the light soon started to fade, and by the time we were approaching Top of Ecton a small splinter group, perhaps afraid of the dark, had formed.  So these seven miscreants headed off back to Wettonmill via Sugarloaf, whilst the rest of us continued on as planned up to the 369 metre summit of Ecton Hill, reached by the time the light was beginning to fade at 4pm. 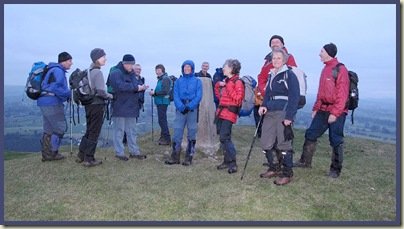 Everyone seemed very happy, and Sue found a patch of deepish snow in which to play.  It’s a good viewpoint, but photos were difficult in the low light.

We knew that Impending darkness would not be a problem, as it’s an easy descent to rejoin the Manifold Valley at Ecton, then a leisurely stroll back to Wettonmill via the course of the old railway as far as the tunnel by The Lee, before a final half hour or so on the good path above the east bank of the river.

Despite the dim light, no torches were needed and we all arrived safely at Wettonmill at 5pm after our five hour stroll plus two hours in the pub – 18km (11 miles) with 780 metres of ascent, as shown below. 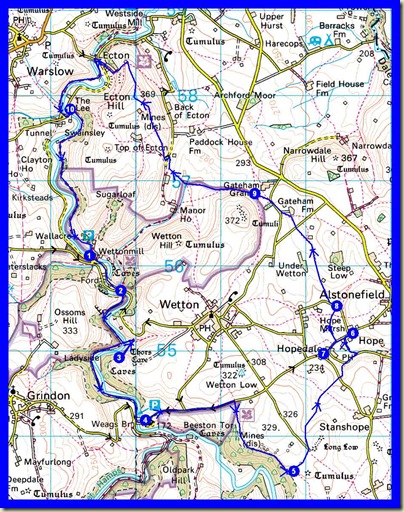 Only a few pictures were taken on the day, so I’ve added the set from our recce walk two months earlier to this slide show.  It’s amazing how quickly summer changes into winter, though the conditions for our walk were much less wintry than they would have been a week earlier…

I wasn’t the only blogger in attendance.  Gayle has posted her usual eloquent résumé, which quite neatly complements this version, here.  We are glad that you enjoyed your day out, Gayle.

Nice report on what was obviously a good day's walk.

Hi Martin, thanks for organising a lovely day out in, yet again, fine weather (I don't know how you do it).

Thanks Trevor, and Mick - I hope your Achilles continues to improve, Mick. We will try to compete with you and Gayle for the most preposterous 2011!