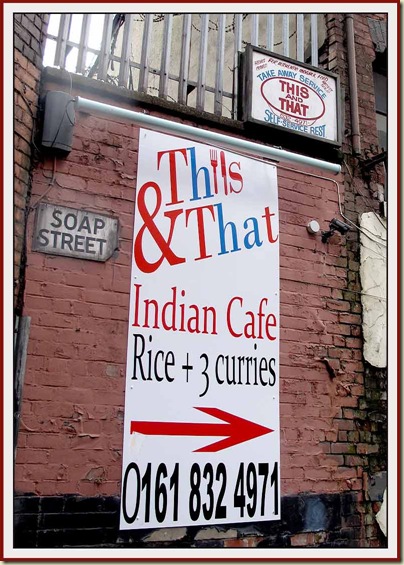 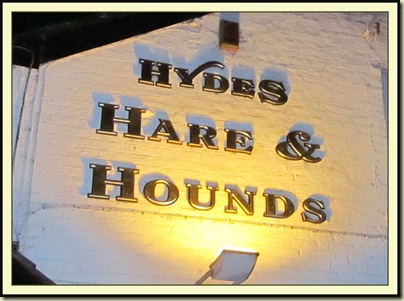 “I know a good Curry House in Shudehill” added Rick.

So, it became a done deal.  A walk into town, with curry for lunch.  Starting with coffee and brownies at Timperley Towers, where the sun beat enticingly through the dining room window.

What a splendid day to go out for a stroll.

So, after waving Sue off to work, four layabouts set off along the towpath of the Bridgewater Canal in search of Curry and Ale.

After a muddy section of disreputable towpath up to Brooklands, the newly surfaced towpath from there to Stretford, courtesy of Sustrans, was a delight.

Ale was available here, where we passed by the Bridge Inn and under Dane Road, but Norman (see previous posting) was not on hand to drag us inside. 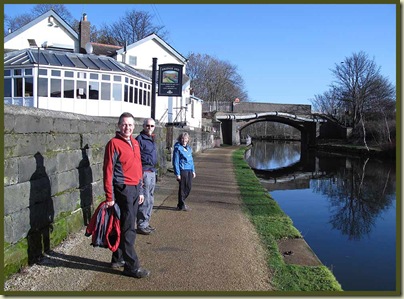 [This posting’s images have even less merit as photographic masterpieces than usual, but, as usual, they are intended to complement the narrative rather than be eye-catching in their own right.]

Here’s the River Mersey, which we crossed in Stretford.  You can see from the height of fairly recent debris on the right bank, that the river has been quite full.  What interested us though was the flash of colour as a Kingfisher flew under the bridge to the tree on the right.  Lovely to see these birds near the centre of a major city.  Grey Wagtails, common hereabouts, were also busily seeking their lunch. 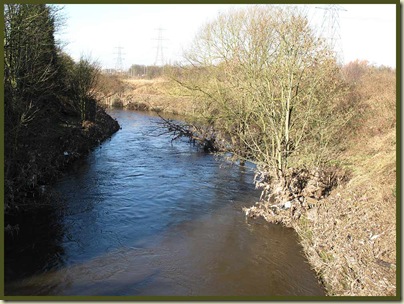 The canal is lined by a fair number of trees such as this Silver Birch, sometimes to the detriment of the stone banking and the towpath. 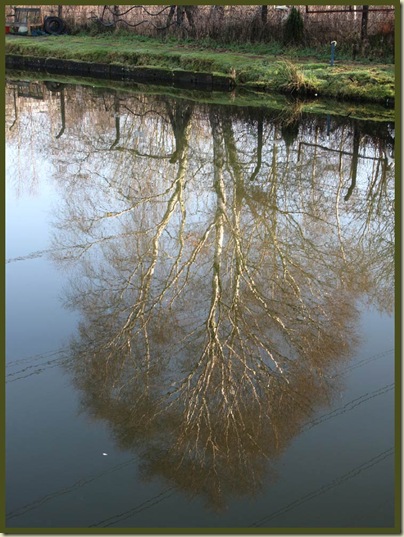 There’s another pub in the distance – we zoomed on past it – curry was top of our agenda. 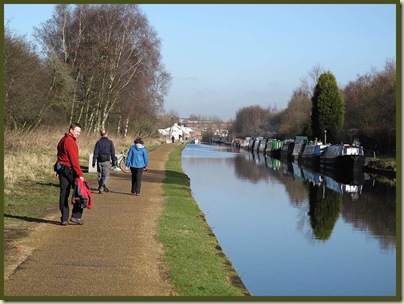 Some of the canal boats are in rather poor condition. 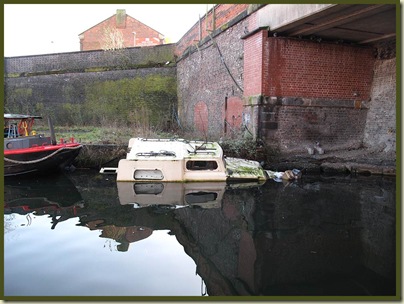 Beyond Stretford, Sustrans are continuing with the repairs to the towpath, which was officially shut hereabouts to protect the new surface and those working on it, but the workmen seemed happy for us to pass.  Hopefully the ugly tarmac will be given a sympathetic covering. 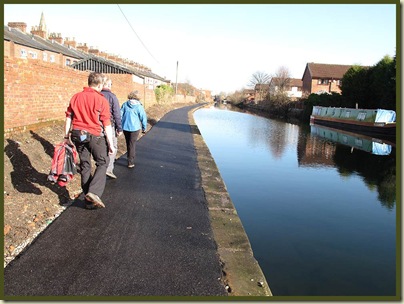 We’re still some way from the City Centre, but there’s regeneration of housing around here. 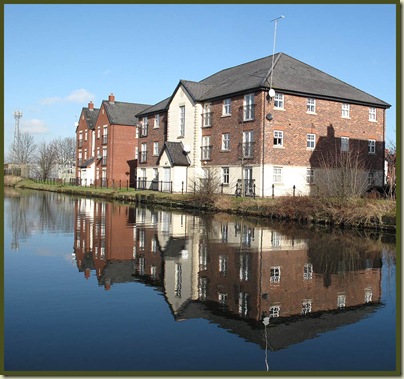 The new tarmac ended where the Bridgewater Canal branched off towards Eccles.  The routes are not signposted here, and the young lady on the mountain bike entertained us by falling off in a quandary at the end of the tarmac. 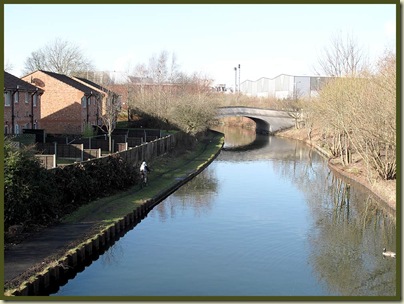 We four layabouts continued along the right hand fork, around the back of Old Trafford football ground, where orchids and water-lilies will soon be flourishing. 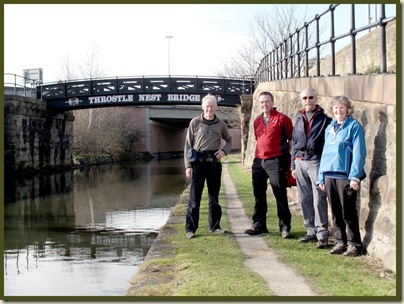 The towpath crosses over Throstle Nest Bridge and heads along a sometimes muddy path towards Deansgate, passing Dukes 92 and the Beetham Tower.

The bar - ‘Dukes 92’ - is so named because it’s next to Lock 92 , which connects the Rochdale Canal with the Bridgewater Canal, and is known as "The Duke's Lock" because the Duke of Bridgewater insisted on having control of the construction and operation of it, so that he could control entry into his canal. 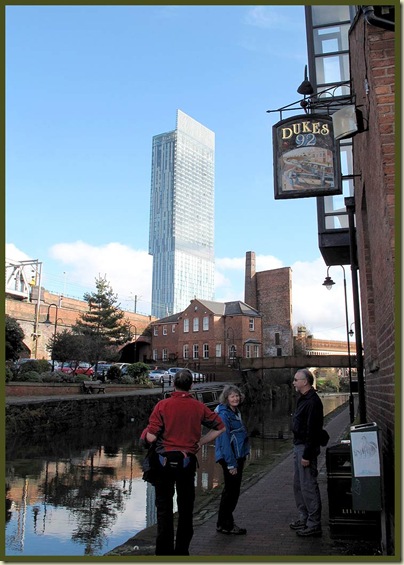 The tunnel under Deansgate used to be longer, but has been reopened at the far end, where you can just see Lock 91, Tunnel Lock. 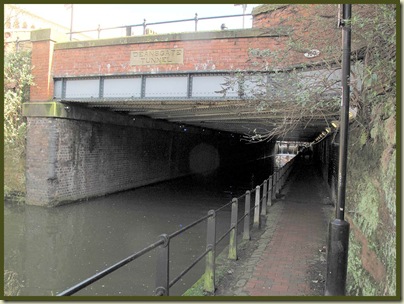 Further on, near the Bridgewater Hall, there’s a small patch of manicured grass with a Duck House.  Very smart! 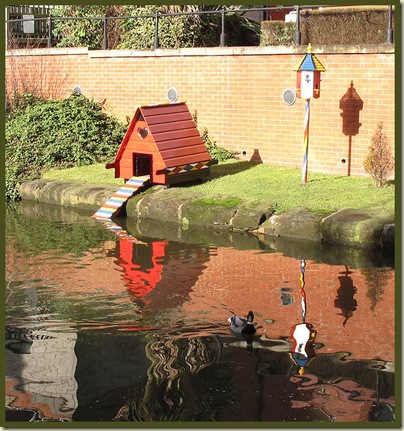 At Oxford Road we couldn’t seem to progress along the towpath, so we took briefly to Whitworth Street, which is lined by magnificent red-bricked buildings such as Lancaster House. 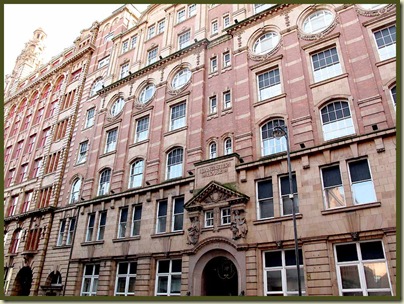 Looking back, behind the car (below) is the building, now a hotel, that used to be the head office of the Refuge Assurance Company.  I spent many hours in that place back in the days before the electronic age (indeed, before decimalisation), when a whole floor of the building was taken up with ladies using comptometers. 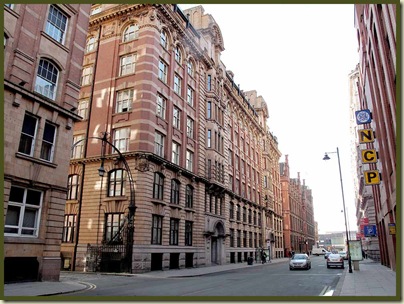 Rejoining the canal at the Gay Village, we continued to Piccadilly, where an office block, now a hotel, squeezes into the available space above the canal, which is largely underground around here.

It needs a clean! 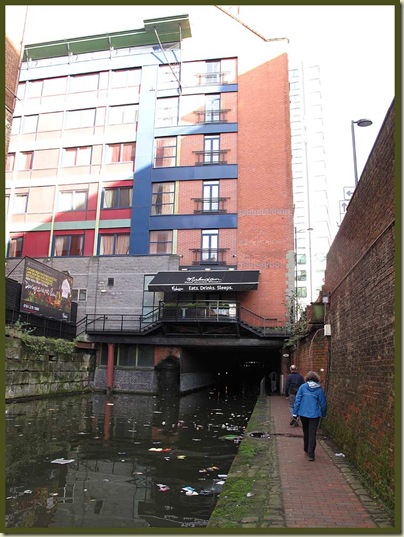 To the north of Lock 84 is Dale Street Warehouse, the only stone-built canal warehouse in Manchester. It was built for the Rochdale Canal Company and has four boat holes which allowed boats to unload inside, although the canal arm that led to the warehouse is now infilled and the area used as a car park. 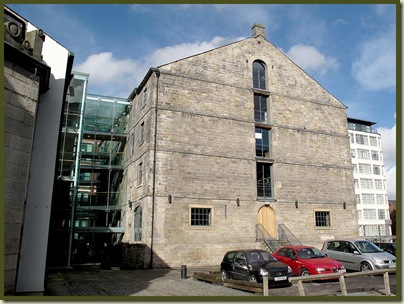 There’s much more about this ‘link canal’ here.  And everything you could ever wish to know about all the Pennine Waterways, here.

At this point we left the canal for good.  We were hungry. 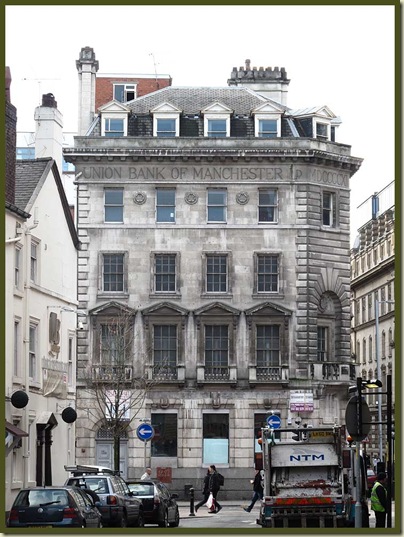 Our destination, and rice and three curries, plus a kebab, for £5.30, was duly attained after some 14km and nearly three hours on the hoof. 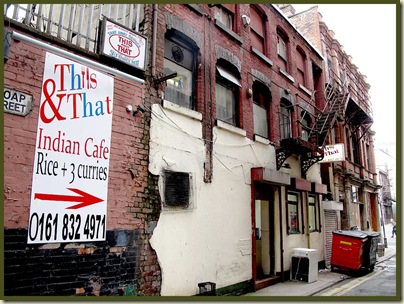 It was most welcome, as was the subsequent ale (not taken here, but at some other similar typical city centre hostelry). 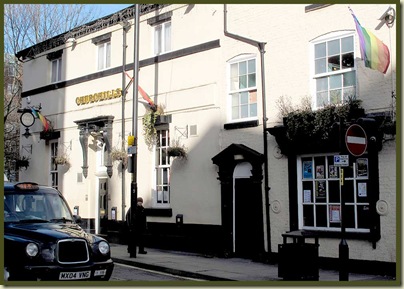 A fine little excursion.  Thanks, Rick, for the idea and for the invitation. 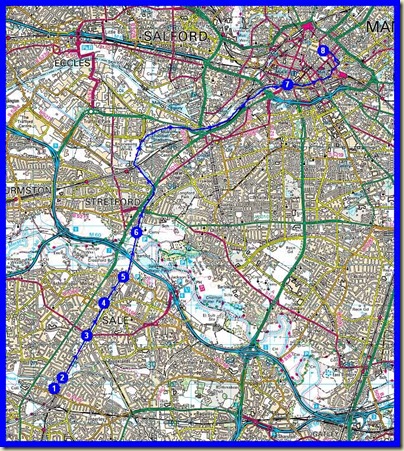 Later, Sue and I met up with Graham B for a pleasurable 9km evening walk around Marple, punctuated by some very pleasant ale taken at the Hare & Hounds in Chadkirk. 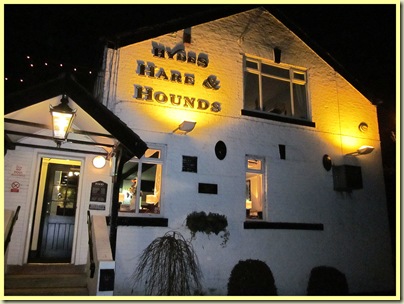 Here’s our route, masterfully planned and executed by Graham.
(You missed a good one, Andrew.) 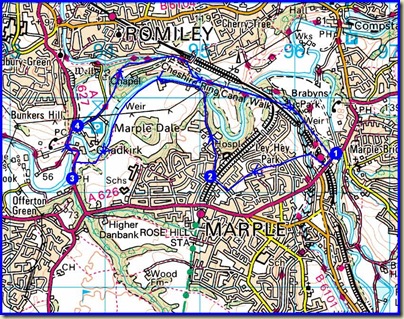 Good walk Martin. I enjoy Manchester immensely.
Sheila and her sister worked at the Refuge from 1978 to 1987.
Cracking photo of the silver birch reflection.

What a splendid day! Interesting to see the layers of history too...
Nice one, Martin.

Thanks Alans
It was indeed a splendid day, in the best of company.
Thanks again for your comments.
M