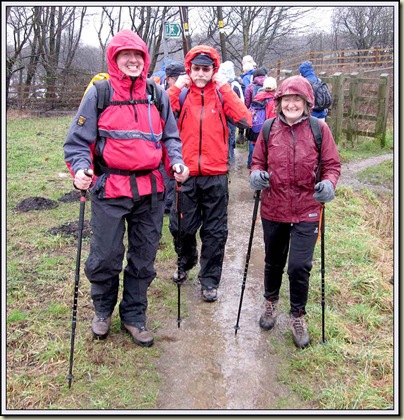 It was a pleasure to rejoin (literally - my membership had lapsed in 1988, according to Peter, the LDWA’s membership secretary, who seems to be in constant touch with his archives) the Long Distance Walkers Association’s East Lancashire Section for the second of five stages of The Salford Trail.
This was not a ‘crack of dawn’ start.
In fact, Rick and I zoomed off from Timperley only to realise that we could get to the Lake District in the time we had allowed ourselves to reach the depths of Salford.
So we returned to Chez Rick for coffee.
A quick whiz around the M60 then saw us collected by JJ and V at Worsley Old Hall before heading (JJ’s car neither zooms nor whizzes) to the start of this (‘linear’?! – see map) walk from Clifton, where a hardy band of walkers had finished Stage 1 of the trail in the rain a few weeks earlier.
It was still raining.  East Lancs LDWA seem to plan their walks to take place on rainy days. I hope to change their luck in due course, but that was not to be today.
We were to rendezvous at 11.00am at a bus stop in Clifton for ‘Stage 2’.  So it was that on this driesh morning small gaggles of bedraggled walkers congregated at various bus stops in Clifton. A rag tag miscellany of some 24 participants were finally rounded up by walk leader Reg, who ensured that he personally informed everyone that they should stay within a metre or so of him to hear his invaluable commentary, which would otherwise be drowned out by the noise of a nearby motorway.
“Pardon?” was the unanimous response.
I’d mentioned this walk to Alan, an ‘outdoors blogger’ (Alan Rayner’s Blog on the Landscape! – an excellent read and source of some interesting ‘gear’ experiments) from Rochdale who I’d never actually met, and was pleased to discover that he’d turned up to this event. Whilst it’s a very friendly and welcoming group of people, it must be a bit of a shock for someone more used to walking alone or with his wife, to suddenly be confronted with 23 strangers. It was great to meet you Alan, I hope you enjoyed the day and that we’ll see you again soon.
The Salford Trail is a 53 mile route around Salford that has been devised by one of its esteemed residents, Roy Bullock, who was on hand to keep walk leader Reg on a tight leash and prevent him from straying too far from the ‘official’ route. This didn’t stop Norman (53), a confirmed alcoholic with no waterproofs, from trying frequently to escape by heading to the front of the ‘pack’ and shooting off in the direction of one or other of Salford’s numerous hostelries muttering (bizarrely) ‘I just want to dry out’!
Anyway, Roy has lovingly constructed a web site for this walk – The Salford Trail, which describes the route in great detail.  Here he is with Reg and some ‘hangers on’. 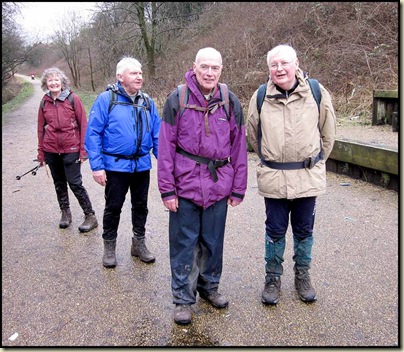 Today’s stage from Clifton to Worsley soon took us over a very bouncy bridge from which it seemed the lighter amongst us may be catapulted at any moment onto the motorway.  We continued towards a huge line of electricity pylons beside a confluence of motorways in the M60/61/62 area of spaghetti, eventually grinding to a halt at the ‘PRIVATE’ signs that protect the sanctity of Wardley Hall from such wastrels as our LDWA group. Probably just as well, as the skull of a previous trespasser who was hanged, drawn and quartered, is on display there in a glass case, and we didn’t want Reg, a ‘butcher’, to get ideas above his station.
[Or so I was told!]
We then passed a cemetery, in which Joe Gladwin (Wally Batty in ‘Last of the Summer Wine’) is buried, before the first of many crossings of the A580 East Lancs Road saw us arrive at a picnic table in Roe Green.
A nearby Methodist Chapel sported one of those bright blue plaques that announce things like ‘A Famous Person, J. Bloggs, lived here from 1992 to 1993’.  Today’s star on a blue plaque was Michael Vaughan, the Yorkshire cricketer, whose formative years were spent hereabouts. [ie – he was baptised here]
So why didn’t he play for Lancashire?
“Come on” hastened Reg “we don’t want to keep the wardens waiting”.  So off we went, through a sea of mud past Ellesmere Golf Course, with worried walkers concerned for a while about the whereabouts of their absent leader, who had skipped briefly behind a tree. Luckily, by the time a route decision was needed, Reg had sprinted back to the vanguard of the party and was on hand to deliver the goods. By and by, via a route that may not be correct on the map at the foot of this posting, we reached Blackleach Country Park, where the wardens had laid out some tables for us to enjoy lunch in the Visitor Centre out of the rain, and they supplied tea and coffee for those who didn’t have that with them. It was a very jolly time during which Peter (LDWA Membership Secretary) confirmed that despite a 23 year lapse as a member, I could simply renew on the basis of the details on their system – he even had my old LDWA number and my address to hand on his ‘phone! 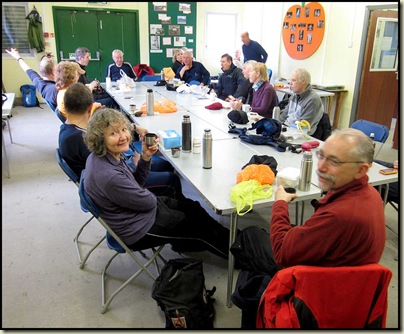 Others were feeling rather weary by now, and shortly after leaving the country park we joined an old ‘loop line’ where another Peter decided to take a break from walking. 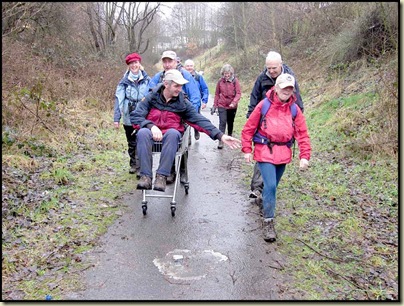 I didn’t quite have this in mind as a legitimate way of progressing an LDWA walk, but was reassured by Norman, a font of useful information – “he does 100 milers in one of those”, he quipped.
Much of the rest of the walk was on the course of these old railway ‘loop’ lines, which have luckily been preserved as an amenity. In fact, some parts have only recently been restored for  use, one section being with the help of a local Junior School. 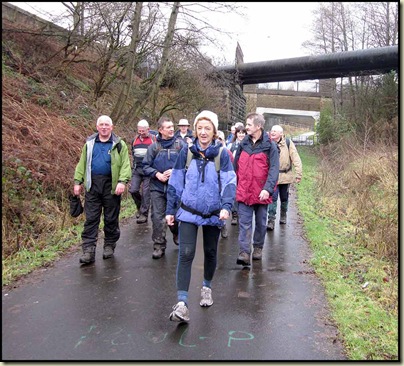 The railway runs through a shallow cutting, above which a pipe line carrying water from Thirlmere runs, and the site of Little Hulton station, 1875 to 1954, is celebrated with this stone plaque and a small seating area. 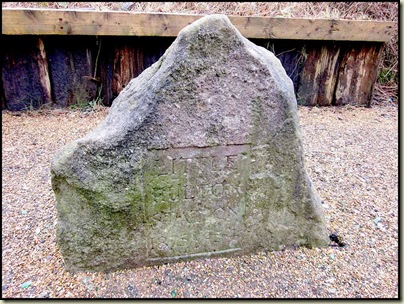 Further on, a small box bridge carrying pipes is adorned with plaques on both sides exhorting the proud fact that the bridge was made by Henry Bayley Son & Co, Albion Iron Works, Miles Platting, Manchester, in 1868. 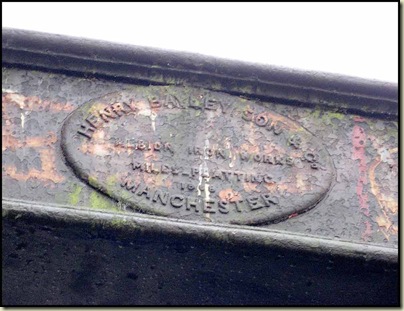 The final section of the walk was spent crossing fields, in woodland, and on the loop lines, but mainly (it seemed) negotiating the East Lancs Road, in this instance via a bridge, or is it a tunnel?, under a  four-way junction of that road. 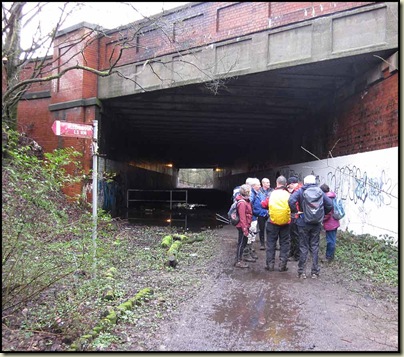 Whilst Norman and others could now dive consciencelessly into a nearby hostelry, our small but sober contingent returned to Clifton and thence to reflect on today’s good company and do battle with Salford’s afternoon traffic in an effort to get back to Timperley in time to prepare for our respective ‘next appointments’.
It’s a busy life!
The LDWA’s ‘official’ and much more accurate report is to be found by scrolling down this page.
Here’s an approximation of the route – about 17km, with 200 metres ascent, taking us just over four and a half hours, including an hour for breaks. 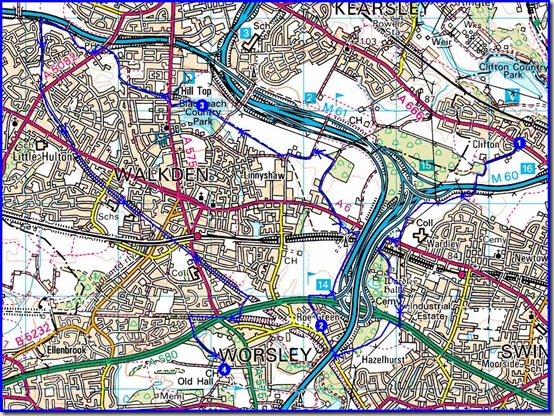 Hi Martin,
Good post. Havn't managed to complete my short post on the day. The internet is down more than it's on here in west cumbria. And it's steam driven.
I couldn't find a map of the route, did you download yours or create it post walk.

Thanks for the invite i enjoyed the day very much.

Thanks Alan, it was good to meet you. Perhaps you'll be able to join us on Stage 3 on 23 March. I created the map based on the route description and my poor memory. It'll be 'roughly accurate'!