Sorry about the delay in posting – I’ll try to catch up over the next few days.

Last Wednesday, was it really a week ago?, JJ, Viv, Rick and I set off from a rather gloomy Timperley (I’ve tried to adjust the image in the slideshow to make it ‘less gloomy’!) at around 7.15am.  Stuart kindly picked us up in Lancaster and the five of us enjoyed a magnificent Lakeland day.  The slideshow (click here – 48 images) provides a fuller story, but here’s a taster.

By soon after 10am  we were slogging up to the base of Base Brown in the sunshine. 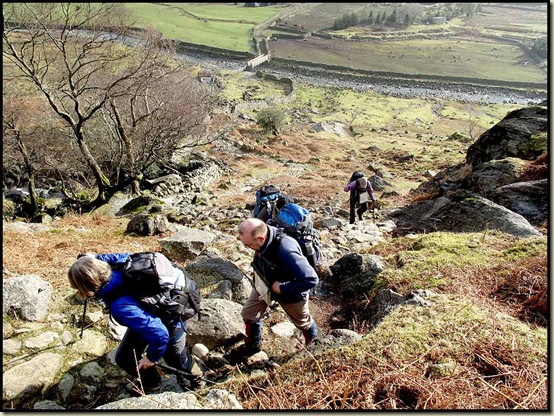 Sourmilk Gill’s fine waterfall, provided a welcome break for those of us with cameras, whilst everyone stopped to peel off layers of superfluous clothing. 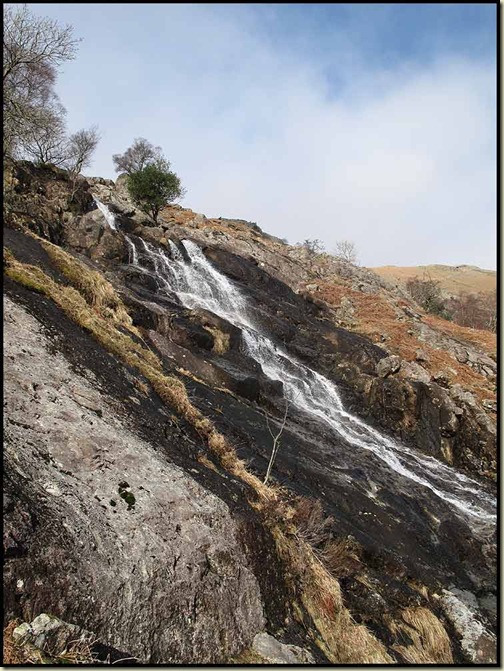 The ascent of Base Brown proved harder than expected.  Stuart and I headed up an icy gully.  JJ, Viv and Rick wisely headed around to the right in a futile search for an easier line, and eventually gave up in favour of the path up Gillercomb.  This caused quite a delay, but Stuart and I could hardly complain as we had the only two guidebooks, which clearly state that the easy route up is to the left, rather than the chosen path.

I still feel guilty about this faux pas, but nobody seemed too bothered on this warm, sunny day.

Here’s a view from near the summit of Base Brown. 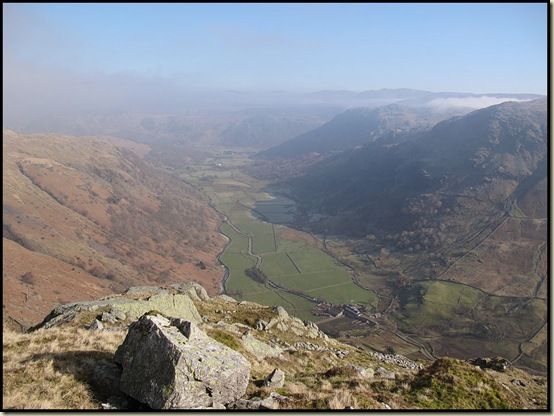 The route over Green Gable to Great Gable saw us dicing with cloud and admiring inversions, especially towards Pillar, the Langdale peaks, and the nearby Scafell summits, seen below. 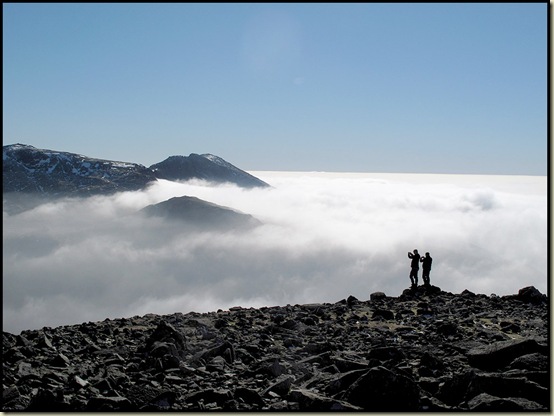 A photographer* was lingering on the summit of Great Gable.  It wasn’t actually the best day he had enjoyed up here, but he certainly wasn’t complaining.  He told us he was taking photos for an article on ‘A Year in the Life of Great Gable’ that should be published in Trail Magazine next winter.

* Stewart Smith, professional photographer and blogger, whose entry for the day is here.  Thanks go to Martin Rye for identifying Stewart, and to JJ for taking his photo and various others used in the slide show for this day out. 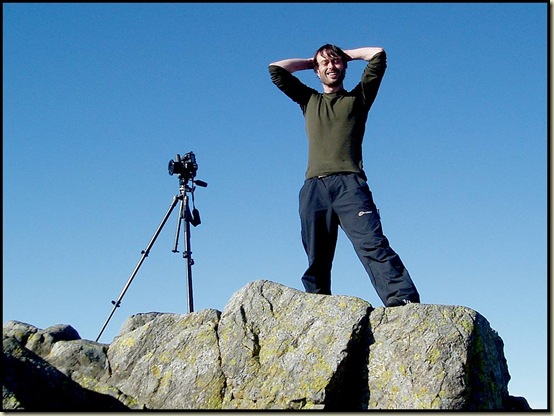 This self-timed image captures us at the summit of Great Gable, where we enjoyed one of several lunch breaks. 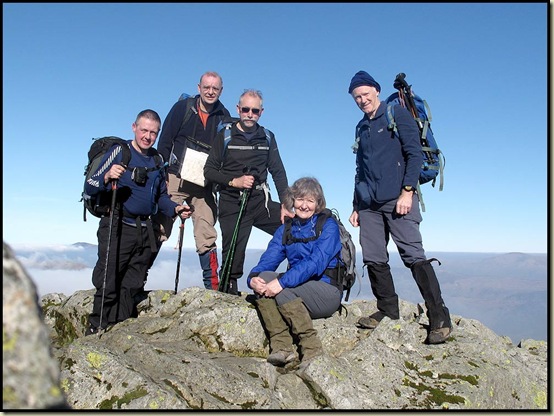 The rocky descent to Sty Head was achieved without resort to any form of hurrying, but we still had time to go a bit further.

Sprinkling Tarn was partially shaded as the sun tried to hide behind England’s highest mountain.  A conflab (below) resulted in the decision to forego Allen Crags and Glaramara today.  Instead we chose to go over Great Slack to Seathwaite Fell, an outlying ‘Wainwright’ that none of us could recall having visited before today. 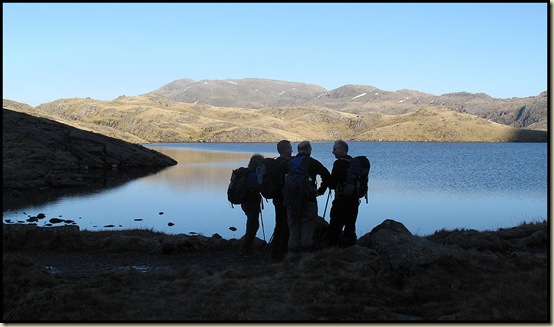 We passed a tent – no sign of its occupants – in a fine position by Sprinkling Tarn. 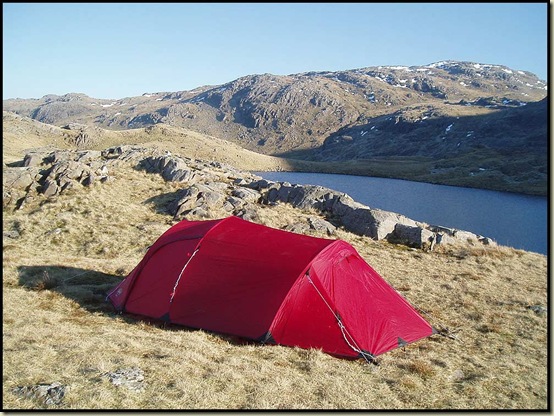 After around thirty minutes we reached the summit of Seathwaite Fell, from where the fine views down Borrowdale were partly obscured by the lowering cloud.

A final snack gave us the energy to locate a steep grassy gully to the north west of the summit, and carefully descend it to the main path by Styhead Gill.  Looking back from Stockley Bridge, the flanks of Seathwaite Fell to look quite imposing.  Our route was to the right. 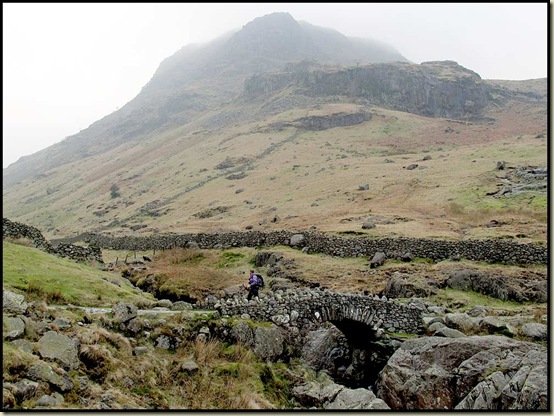 We took a very leisurely 7 hours over this 11km walk with 1050 metres ascent.  Those counting summits could add four Wainwrights and five Birketts to their tally. 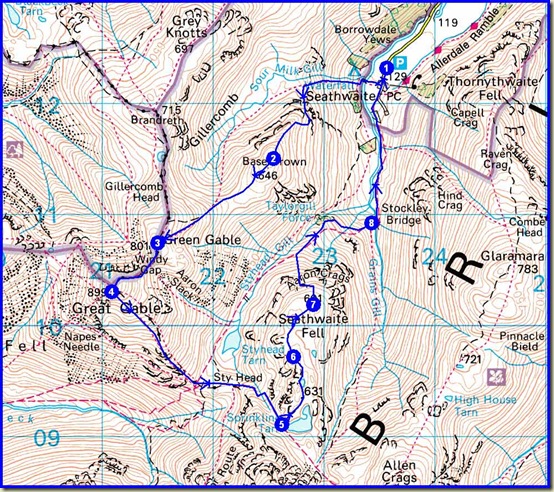 As previously mentioned, the slideshow is here, and we did of course enjoy a post-walk beer, on this occasion at The Salutation in Threlkeld.

“A Grand Day Out” we all agreed.

That looks like a great wild pitch at Sprinkling Tarn...
Your trip looks a good excursion....

A great day there Martin and the team. The weather was kind looking at the pics. So all wednesdays are not wet! Ha.

Thanks Trevor, thanks Alan - Wednesdays certainly aren't all wet!

Great day on the hills there Martin. That photographer is Stewart Smith. Top photo ace and his blog is superb. Keen hill walker as well.

Thanks Martin, and well spotted. I've added a comment and a link within the posting, and have tried to comment on Stewart's site, but the comment disappeared when I sent it - either gone or awaiting moderation... I don't know...

I have sent a PM to him on twitter. He knows one way or the other. Enjoy his blog and stunning photos.

Wow. Looks like a stunning day out! Any brockenspectres?

I'll try again, Stewart. Thanks for your comment.
Mark - there weren't any Brocken Spectres on our walk, and I presume Stewart didn't see one. We were very close to getting one whilst on top of Green Gable - I hung around waiting, but it never came!

Super day Martin. Made me want a quick trip to the Lakes myself!

Gibson, we are very lucky to have the Lakes within acceptable reach for a day walk, especially with a few of us living in Timperley to share the transport, and Stuart (who lives further north) to pick us up half way.
Just let us know if you fancy joining us sometime - or vice-versa (contact us via www.topwalks.com if you'd like email warning of our trips, which do tend to be at short notice to try to optimise the weather!).

I loved reading this report with Stewy's at the same time. It's so nice to see groups of people come together who you only know online.
I shall bookmark this though for future use!

Thanks for that kind offer Martin.

Right now plans are northwards but looking at your 'topwalks' site I note that we may be in Skye towards the end of your trip there - if the weather is being friendly.

Thanks Helen, and Gibson.
Gibson, we got an offer we couldn't refuse to go to Mallorca over Easter (I suppose the Spanish strikes may put paid to that, we'll see) and with little interest from others in the Skye trip, and lots of summer trips still to plan, we decided to abandon Skye for the time being.
We'll be at B of O on 6-8 May though...