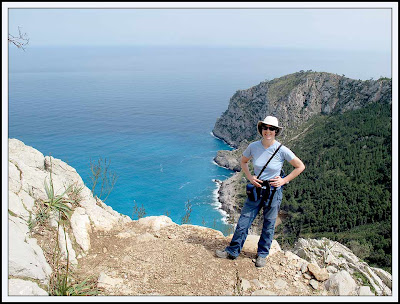 Woke to a cloudy day and a clumsy kitchen (still haven't cleared the broken bottle from behind the 'fridge!). Light rain fell as we breakfasted, wondering how those at home were coping with the UK's heatwave.

Good news has arrived on the grandparenting front - Kate and Jacob are back at home and the lad is getting on well with his new surroundings.

This morning Sue and I got a lift in Robert and Lyn's taxi, and after a few false trails in Alcúdia we were dropped off at the beach near Campamento de la Victoria. A 40 minute stroll up to Ermita de la Victoria was rewarded with a coffee at the otherwise deserted restaurant. But the narrow path to Penya Roja was really busy. It runs alongside cliffs to some fortifications that overlook Cap del Pinar. After squeezing through a small tunnel we clung on to a chain fastened to the rocks above a 250 metre plummet into the sea (one bounce or two?) for the unwary. Having survived thus far it was an easy scramble to a lonely cannon that has spent the last 400 years perched atop Penya Roja. It wasn't so lonely today though, with hundreds of German tourists clambering all over it.

After retracing our steps for a while, we returned to the track that narrows to a steep mountain path for the ascent to our highest point of the day, Talaia D'Alcúdia, an excellent spot for lunch amongst the asphodel - 445 metres, with fine views in all directions on this now clear day.

It's was a sunny hour from here to Coll Baix, down at 130 metres. The path crosses the bare slopes of the Puig d'es Boc before descending in zigzags. A vertiginous view (pictured) at the top of these zigzags affords one the pleasure of the sight of the churning waters on the beach at Platja de Coll Baix, which can apparently be a dangerous place to bathe.

From Coll Baix, pleasant woodland paths led us all the way back to Alcúdia, via an incident with a bus that had mislaid its 20 passengers (we had seen them) and a rare encounter with some Bee Orchids that were flourishing in an innocuous ditch at the gates to Parc de la Victoria.

The old town of Alcúdia was a fine place to finish this walk, after 23km of strolling with around 800 metres ascent, in around 7 hours including breaks. A pot of tea at one of many cafés went down very well before we tracked down a bus back to Puerto Pollença. Provisions had been laid out by R+L for us to construct a meal, which was duly wolfed down after that duo had returned at 8pm from a 55 mile bike ride.

So today turned out to be a lovely day, despite the early drizzle, but we have heard the sad news from SAHH that there has been a temporary hiatus in Timperley's April heatwave.

Sent using BlackBerry® from Orange
Posted by Phreerunner at 21:10

I remember doing these walks in boiling hot sunshine. A bit like we are having here at the mo.
Have a good trip M & S.