Wednesday 22 June 2011 – Wheeling and Walking in the Peak District

Today Sue was booked in at a function in Baslow to celebrate the Silver Jubilee of Andrew Montgomerie’s ordainment as a vicar.
I decided to tag along, for a breath of fresh air whilst Sue was busy celebrating with the worthies of Andrew’s congregation. 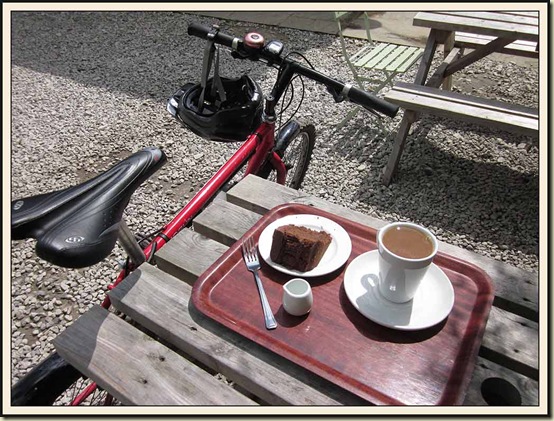 I managed to find a most enjoyable route, mainly off-road, with no particular difficulties – there’s a link to the route card below.
After the briefest of stretches along the main A619 road, a quiet minor road led up to Pilsley, home of one of numerous ‘Devonshire Arms’ hostelries in these parts, where the Duke of Devonshire – the Cavendish dynasty, has been the principal landowner for hundreds of years. 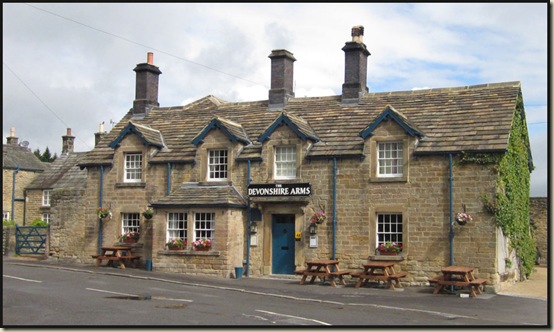 The scenic ride took me by mistake to Bakewell, then back to Edensor and a lovely off-road section through New Piece and Manners woods to a major junction of paths to the south east of Coombs Farm.
Here’s the view from that junction. 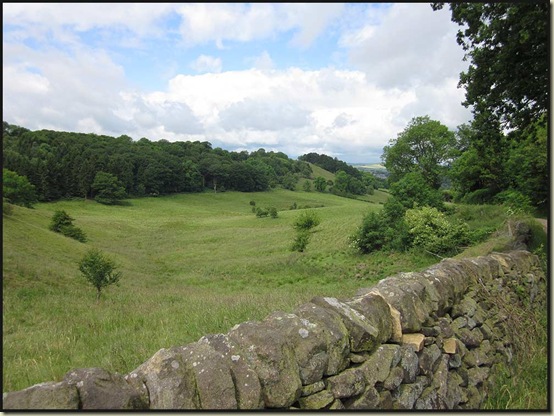 Beyond Coombs Farm, the track passes under a bridge that marks the southern end of the Monsal Trail, six tunnels along which have recently been reopened, making the trail excellent for cyclists as well as walkers.  Previously cyclists had limited access as, with the tunnels blocked for many years, the cyclable sections were linked mainly by footpaths barred to wheels.
My route today didn’t extend as far as the tunnels, but the quiet track made for a very pleasant, relaxing ride after the undulating start from Baslow. 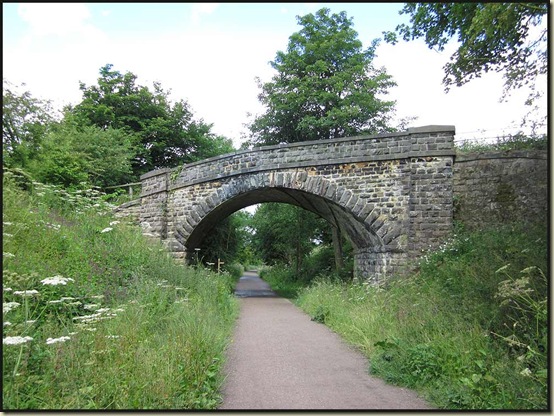 I don’t tend to rush about on the bike.  It gives me a sore bottom.  Tea/coffee shops do a good business – I can’t cycle past them – as happened at Hassop Station cafe – see above.
After leaving the easy trail near Great Longstone, I headed up to Rowland, and on up a narrow lane to an area strewn with these blue signs: 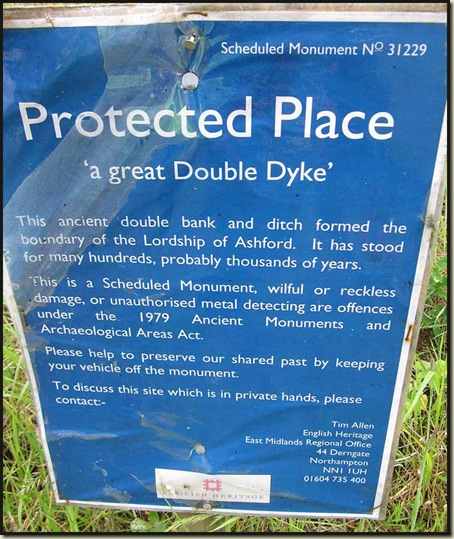 This is obviously one of a number of areas in the Peak District where off-road vehicles have caused damage to ancient artifacts and by-ways.  This particular location is one of many being monitored.
I saw no evidence of off-road vehicles today.  There were plenty of signs indicating where they were and were not allowed to venture.  There seem to be plenty of places where they are tolerated, including some of the better surfaced lanes hereabouts.
Here’s the double dyke that is in need of protection.  Exciting, isn’t it? 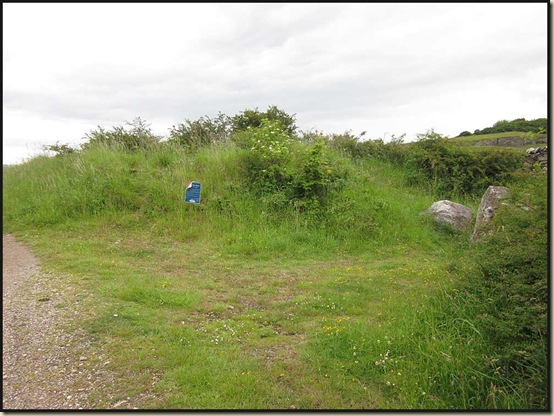 Just up the lane, Deep Rake becomes High Rake and the track runs beside this deep quarry.  I suspect that vehicles rather more corrosive than trial bikes and recreational 4WDs may have somewhat damaged the fragile double dyke just here. 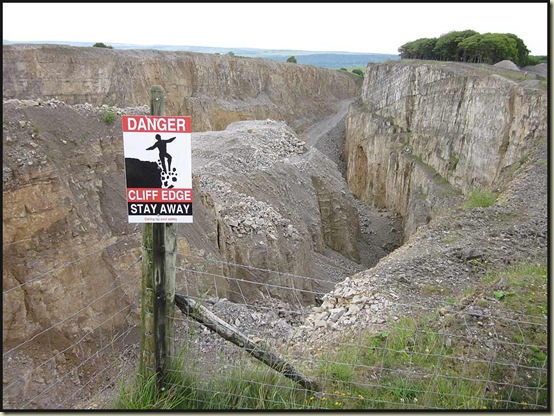 Just beyond the quarry, a grassy bridleway leads down Longstone Moor towards a large pond that appears to be a relic of intense mining activity just here. 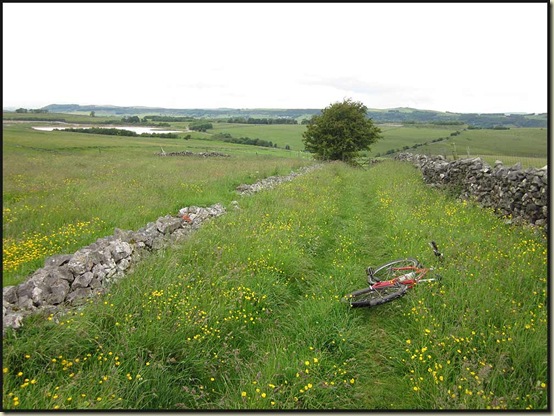 At another major junction my route led down Rough Side, which is signed clearly as a footpath.  The place was deserted, so I would have cycled anyway, as the surface looked as if it wouldn’t be harmed by my tyres, but another sign, whilst barring anything with an engine, encouraged cyclists and horseriders to be courteous to other users.
The track surface has received recent attention and was excellent to cycle along, eventually turning into a narrow thread of tarmac down Coombs Lane for a quick descent to Calver. 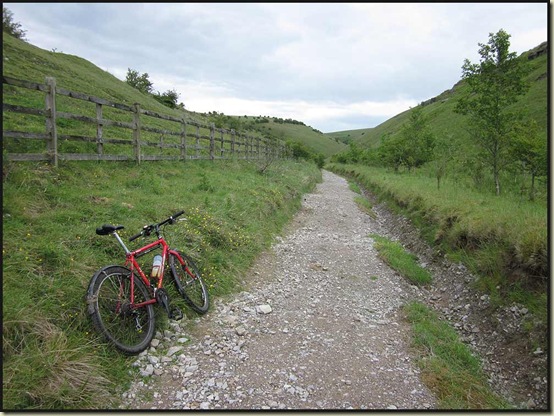 From Calver, another very short section along the main road took me to a gentle climb up the B6001 towards Bakewell, past a lay-by that those wishing to avoid parking charges could use as a base for this route.  A left turn along a narrow lane led to a 30-40 mph sweeping descent back to Baslow.
The route is shown below, and there’s a route card here.  (It prints onto one A4 sheet at 70%.) 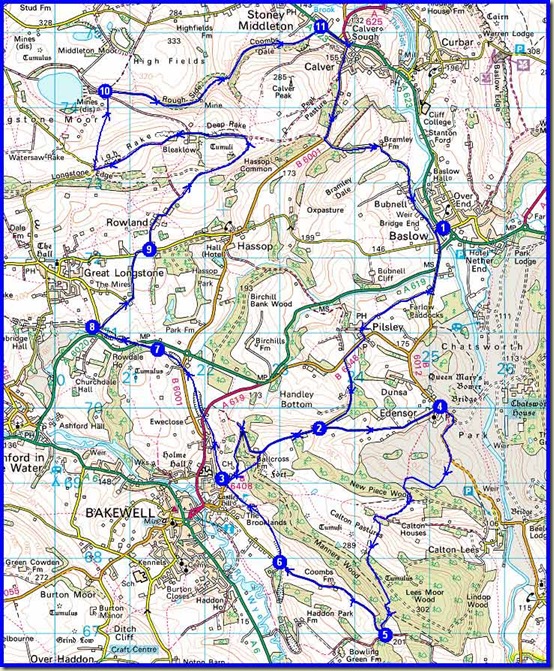 Fortified by tea in the church hall, and accompanied by a well fed wife, I stashed the bike and proceeded up the hill towards Baslow Edge, past houses you would love to own. 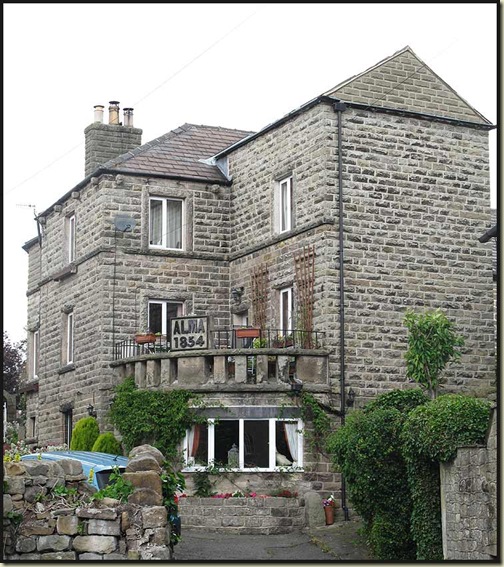 A few minutes above the village, a shower was swinging in, backed by sunny period.  (Did I mention it was a showery day?) 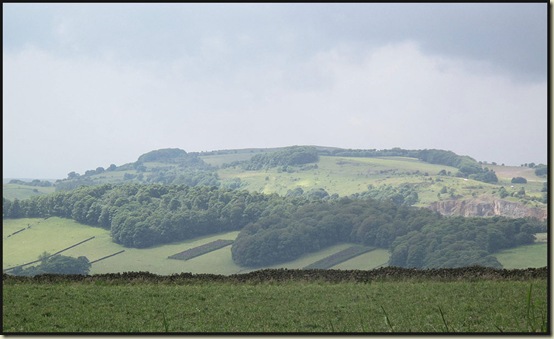 The Duke of Devonshire’s Chatsworth estate was in clear view to the south. 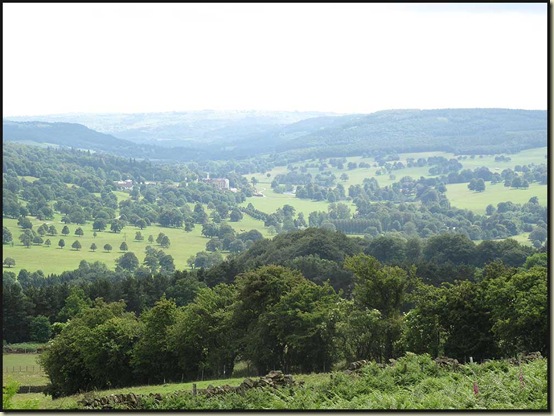 Just before the delights of Baslow Edge, we reached Wellington's monument, dedicated to the Duke of Wellington and a celebration of his victory at the battle of Waterloo in 1815. It was erected by a local man called Dr Wrench, who as an army man, felt the need to counterbalance the memorial dedicated to Admiral Nelson on nearby Birchen Edge. 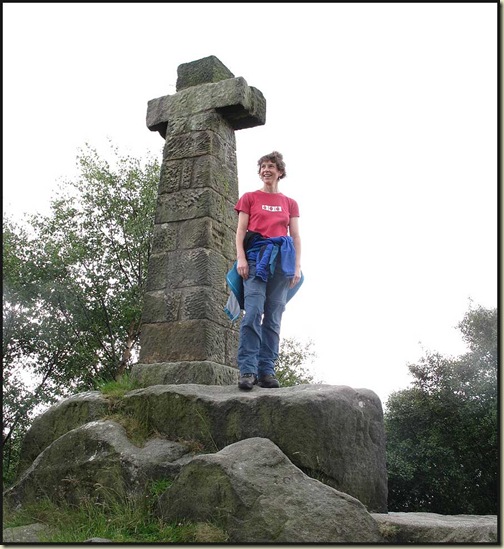 Once on the Edge, we passed this huge boulder that I can recall trying to ascend on many previous visits. 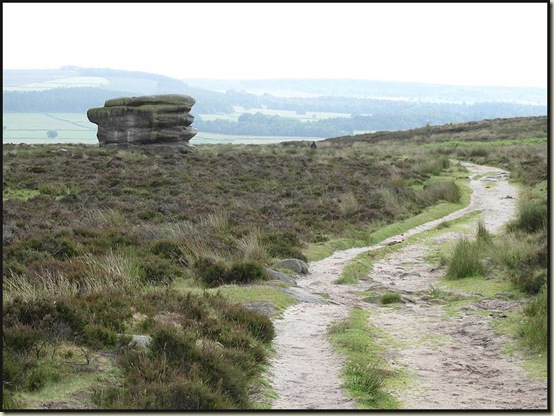 There’s a good view from the Edge above Curbar.  In between showers. 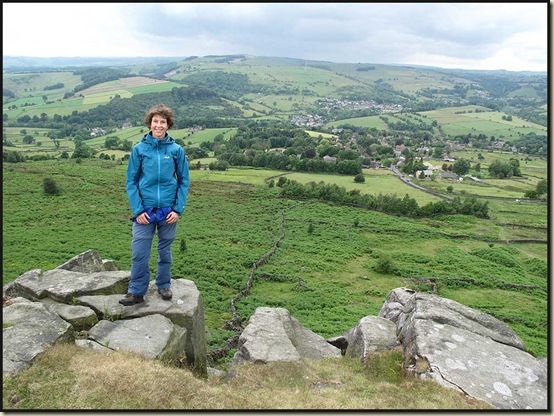 Back down in the valley, the River Derwent flows serenely through the village of Curbar. 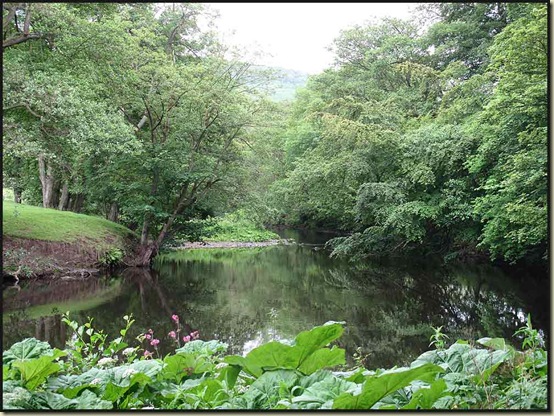 A pleasant riverside path and a quiet lane led back to Baslow and its noisy weir. 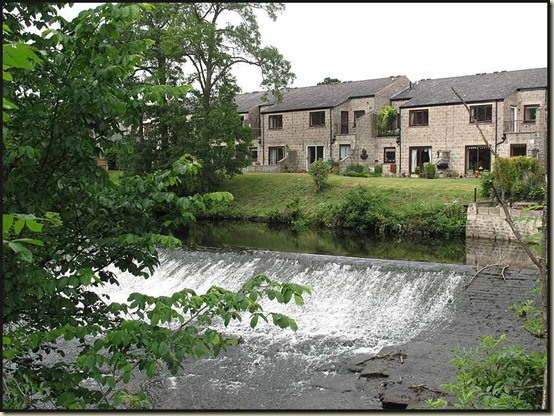 Crossing back over the river by the old toll bridge, we passed a brick booth from which the tolls may have been collected (by midgets?). 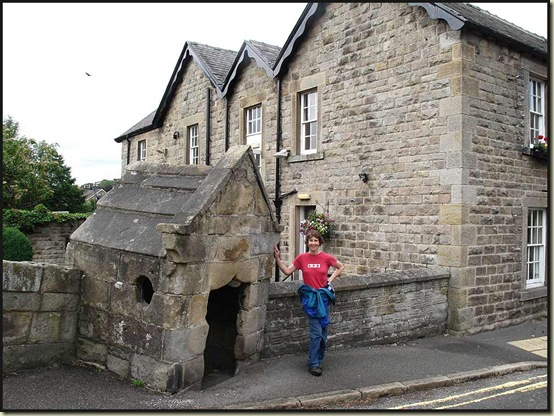 It’s thanks to Andrew, the vicar of St Anne’s church in Baslow, that we made this trip, and a very enjoyable day out it was too. 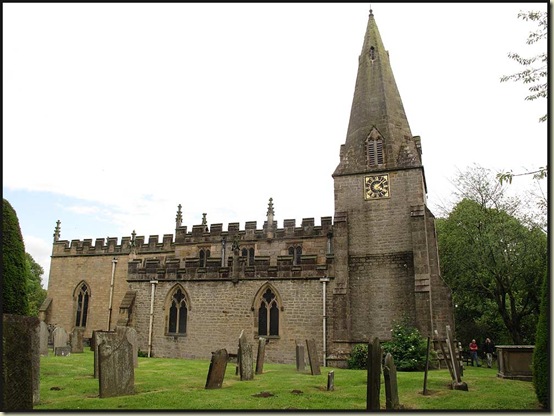 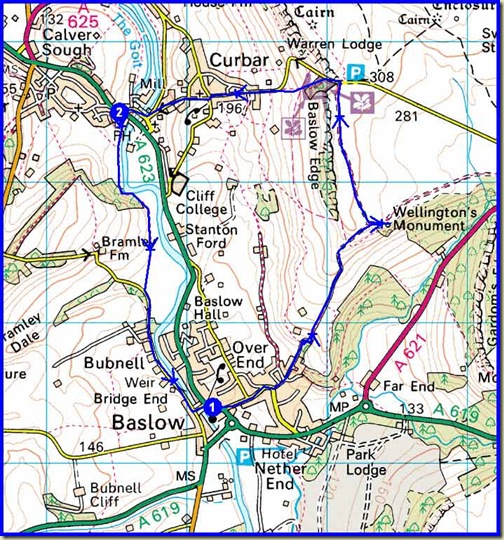 A slide show for the whole day can be found here, and the route card for the bike ride is here.
Posted by Phreerunner at 14:54

I was cycling round there myself only a couple of weekends ago. The tracks along the top and bottom of Baslow Edge are very good and the pull up the track from Baslow to Wellington's monument is 'to die for' :)

That boulder is called the Eaglestone and all the routes up it are stupidly hard except for the one laughably known as the descent route, which is just quite hard.

Thanks Tony
I seem to remember that boulder being a bit problematic!
I was quite happy to walk up to Baslow Edge! There was nothing particularly steep on the bike ride.
I'll be doing the Mam Tor Classic - 33km from Castleton - tomorrow with a friend who has just got into MTBing - 9.30 if you're interested.

Hmmm tempting though a 9:30 start makes it a bit tricky to do breakfast in the Woodbine first ;)

We have a plan to go out that way tomorrow anyway but from mam tor rd out towards the Roych, then edale and back past Hope Cross, so our paths might cross towards the end. Have a good one. The forecast looks like a day to take lots of water!

No Gayle, I didn't know about Jack, and the Monsal Trail doesn't really go into Bakewell anyway. Sadly he will have disappeared to the north by the time I get to Castleton tomorrow!