This report is courtesy of a Guest Blogger, JJ, aka John Jocys, who together with two comrades, Fast Blackshaw and Artichoke Lady, organised this walk for East Lancs LDWA.  I’d like to thank JJ for allowing me to use his words, in blue below, enabling me to ‘catch up’ with postings (I’ve had an uneventful week – a posting about the effort involved in editing 1500 images from our Turkish trip isn’t really warranted) and restrict my efforts regarding Sunday’s walk to this annotated slide show. 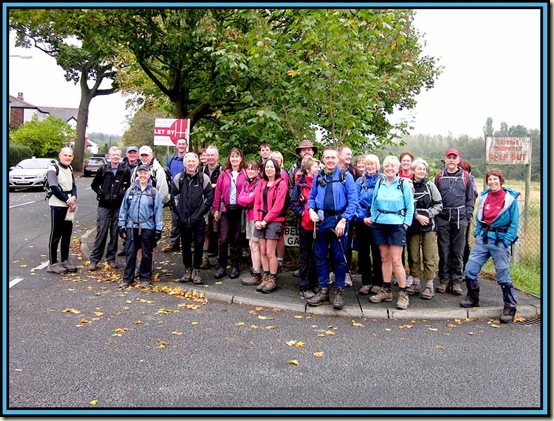 The conditions were rather damp and drizzly as 24 (28 - sic - ed) eager(ish) walkers gathered in the quiet environs of Hale, all ready to embark on the 2nd ‘Jump in the Lake’ walk – a gentle wander around some of the little walked paths of north Cheshire.

The start of the walk, due at 9am, was delayed slightly due to two walkers deciding to start their version of the walk elsewhere. A phone call to Martin & Sue, querying their whereabouts, soon had them appearing in the near distance - Martin looking slightly sheepish at getting the wrong start location.

A passer-by was kind enough to photograph the group, but not before questioning the sanity of our mission.

At 9.13am prompt, 26 walkers and no dogs left the tarmac of Bank Hall Lane to join the slightly muddy north bank of the River Bollin which we followed upstream, under the M56 and then under the magnificently engineered Runway 2 River Bollin culvert. 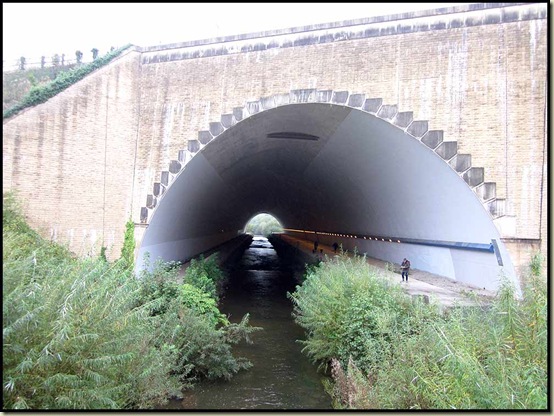 It was the construction of this idol to the aeroplane, or more accurately, the destruction of the countryside, that gave great fame (but little reward) to ‘Swampy’, the environmental protester.

The group, suitably impressed by this man-made structure, headed SW alongside Runway 2 of Manchester International Airport, but not before stopping to admire Norman’s Trig-Point – a famous local landmark. 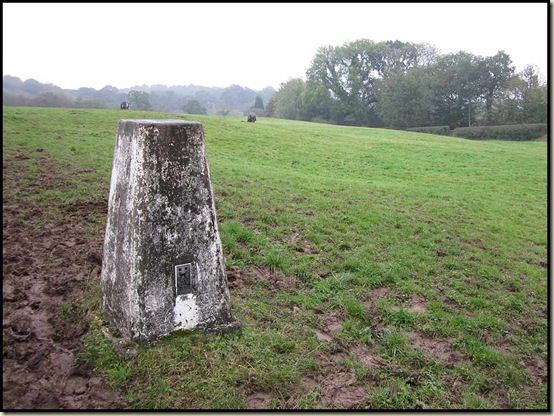 Sadly, Norman (57), was unable to join us on this stravaig, preferring to stay at home and eat bacon sandwiches.

The poor visibility made it difficult to see the aircraft as they hurtled down the runway – but we certainly heard them well enough. There were fewer aircraft taking off this morning than two weeks ago when the route was last reconnoitred, indication of the end of the holiday season or perhaps the recession.

Manchester Airport, previously called Ringway, was named after the village of Ringheye which has long since disappeared under the tarmac and concrete of the airport. It was used extensively during WW2 for a variety of purposes, most famously as the home of No1 Parachute School, where The Parachute Regiment did their parachute training. Churchill’s Special Operations Executive (SOE) – his dirty-tricks brigade, whose main purpose was ‘to set Europe on fire’, also received their parachute training here.

Leaving the airport behind, our route skirted the village of Mobberley at about the same time as the sun had decided to make a welcome appearance. This coincided with the decision to call a halt to proceedings and enjoy elevenses in surprisingly hot sunshine. 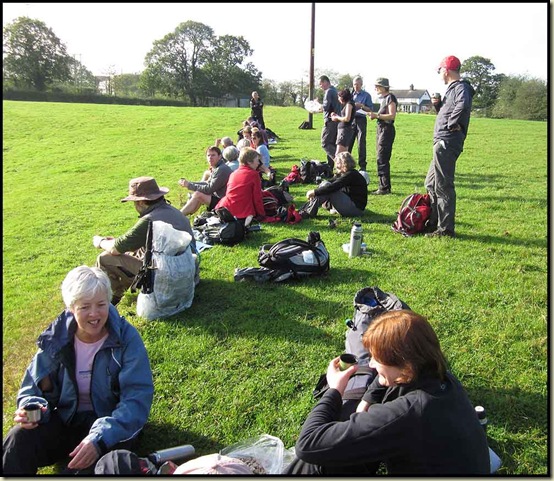 It was at this point that Sue, Martin’s wife, decided she had had enough of our company and headed off to catch the train home from nearby Mobberley Station. Sue had recently started work so her spare time was now at a premium, she had stuff to do at home.

Martin chose this moment to reveal his secret weapon, his guarantee of being invited on our walks: a tupperware container of Chocolate Caramel Shortbread and Chocolate Fudge Brownies. Martin had however rather blotted his copy-book, he had under-estimated the number of walkers on this trip. I had a piece so that was okay!

Waterproofs were packed away, shirts sleeves rolled up and sunglasses donned as the group of 25 (27 - sic - ed) set off, this time to cross the railway line and then on to the affluent Cheshire town of Knutsford, named after the little known experimental car produced by the Ford Motor Company. The illiterate marketing manager of Ford, disgusted by the failure of this automotive adventure, described the designer as a knut…hence ‘Knutsford’. Honest. Norman told me.

The American General Patton had his headquarters in Knutsford. It was here that he made a speech which almost cost him his job. He announced that when the war was over, the world should be ruled by Great Britain and America. This speech, which became known as ‘The Knutsford Incident’, rather miffed the Russians whose sense of humour had taken a bit of a pasting during the war…..they had decided that THEY wanted to rule the world. Now that bit IS true.

An unwelcome kilometre of tarmac took us to the southerly-most entry gate of Tatton Park, the back garden of Tatton Hall, family seat of the Egertons. The property is now jointly managed by the National Trust and Cheshire County Council. NT members still need to pay for car parking, although they are exempt from the entry fee to the hall.

Walking north, along the eastern shoreline of Tatton Mere, we soon arrived at the site of Tatton Old Hall – a manor house built at the turn of the fifteenth century. Looking west across a large and open expanse of grassland, we could see groups of hinds being jealously guarded by magnificently antlered stags. We are entering the rutting season.

This open ground was used as an airstrip in both world wars, and also a dropping zone for trainee paratroopers during the last war. Tatton Mere and the soon to be seen Rostherne Mere were used to train the troops to land on water – hence the name of this walk, ‘Jump in the Lake’. The Special Operations Executive had a training centre at nearby Dunham, they also received parachute and other training here at Tatton. 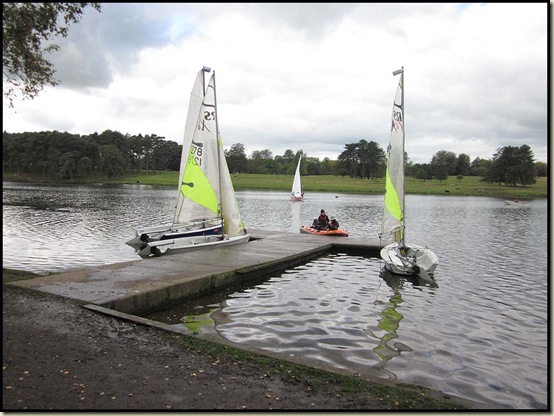 We crossed the open ground to the monument, erected as a tribute to No1 Parachute Training School, 1940-1945. Bunches of flowers usually adorn this memorial, whatever the time of year. Looking East towards the Peak District, bathed in sunshine, we were easily able to identify Shutlingsloe and other points of interest.

The rumbling of empty stomachs drove our band on to Tatton Hall, a neo-classical mansion designed by Samuel and Lewis Wyatt. Our lunch stop was to be in the courtyard of the hall. The courtyard was very crowded, the sunshine having brought the day-trippers out. We all managed to find somewhere to sit to eat and enjoy the break. 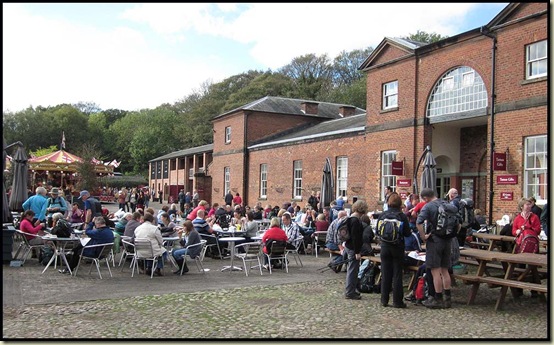 The courtyard has a small, semi-permanent fairground - a great attraction for children of all ages. Unfortunately there was insufficient time for this child to take a ride on the merry-go-round. Fast Blackshaw marched our merry band away from the courtyard and through to Home Farm where time has stood still since the 1930s. It is an authentic working farm that uses traditional farming methods and where traditional breeds are still resident.

Leaving the park behind, the village of Rostherne soon came into view. Its church, dedicated to St. Mary, is quite ancient. Although little is known about the building, a deed dated 1188 states that a church had been on the site at that time. The colours of the local Parachute Regiment Association hang in the church, the more observant visitors spotted the kneelers and cushions bearing the regiment’s colours and insignia. We were treated to a short guided tour of the church by a local resident – who promised us tea if we came back next year. I think we shall have to! 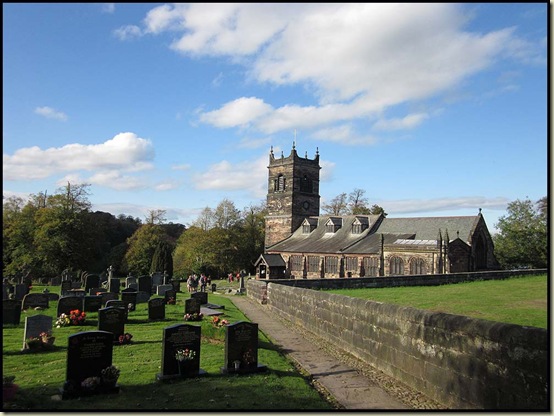 Now on the final leg of our little jaunt, we left Rostherne on the recently created concessionary path that grants views over Rostherne Mere, the largest expanse of water in Cheshire. At it’s deepest point of 100ft it rarely freezes, such is the sheer volume of water.

More tarmac (not THAT much) led us to Birkin House Farm where we once again tramped along pleasant footpaths which took us to a footbridge over the M56. It was an unpleasant shock to be faced with the sight and sound of busy road traffic after we had been enjoying the tranquility of rural Cheshire.

A long farm track from Ryecroft Farm took us north-east for almost a mile where a footpath across farmland led us to a footbridge across the River Bollin, close by Ashley Heath. It was then a short walk on tarmac which took us back to Bank Hall Lane and the end of our walk. Thanks to everyone who joined our party – especially those who had travelled quite a distance to get there, I really enjoyed the day and I hope you did too.

Thanks John, that’s an excellent report.  You can ‘guest’ again.

John’s slideshow is here, and mine is here. 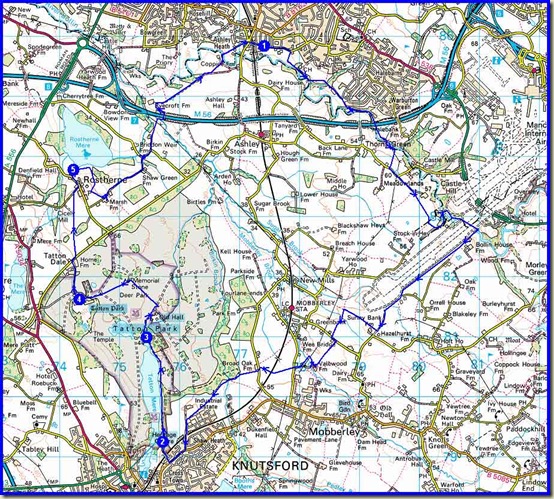 Great site. And a handy way for me to keep tabs on my mum, or "Artichoke Lady" as I shall now call her! Hope to join you all for a walk one day when I'm back in the UK. Richard

Brilliant - we hope to meet you one day, Richard. we wonder what name you'll be christened!
M & S

That's your mother your talking about!!

That should, of course, read 'yor'.

Thank for an enjoyable read JJ - but a bit surprising not to see a swim to go along with that catchy title. It must have been warm enough, given the numbers of shorts featuring in the opening photo.

Nick - Sue left early and took her costume with her, and JJ is a delicate soul who would need encouragement for swim. However, pedant as he now is, he undoubtedly should have led a mass 'jump'.
Tut, tut, JJ.

Me a pedant? Nah!

Anyway, wot's all this about 28 walkers?

The roll call was answered by 28 people. Perhaps two people were counted twice. Perhaps two passers by impersonated long-distance walkers - just for a laff! It's a mystery. Never mind, life will go on, except perhaps for the two discrepancies...