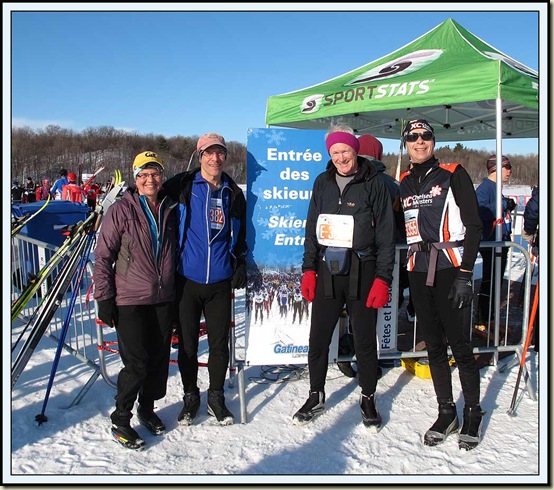 Regular readers will realise that whilst there’s nothing I enjoy more than a plod in the countryside, I am up for the occasional challenge.

Today that challenge was the 51km Gatineau Loppet.  It’s only a short drive to the start, so an early rise wasn’t needed to get to P2 to meet up with Susan and Roy, who ‘collect’ Loppets.  (Everyone needs a hobby, I suppose!)  Ken, my chauffeur for the day, was also there, proudly sporting his ‘Chelsea Masters’ technical top.  You can make what you want of my gear - it’s all very old, but it works.

The ‘Classique’ is the event for ‘cross-country’ rather than ‘skate’ skiers, and today’s entry comprised 331 folk from 22 different countries.  Our group of four, pictured above at the start, represented three of those countries.  I also discovered Sophie, a French Canadian friend, at the start – she was doing a 31km version of the Loppet, the two events being arranged to start together.

We started at 9am in four ‘waves’, at two minute intervals.  The other three were deemed suited to start in the third wave, whilst I was down amongst the duffers (sorry, Sophie) at the back of the field.  Whilst there was a little aggressive behaviour after the start, when ten lanes of skiers rapidly contract to two lanes, at my end of the field everyone was pretty well behaved.

The previous night I’d helped Ken prepare the skis in an attempt to get a bit more grip and glide from the warm conditions than we had last week.  Green klister had been ironed on top of a layer of glide wax, allowed to cool outside for a while, then some magic (as it turned out) violet klister was ironed on top of everything else before putting the skis back into the cooler.

It worked, I was soon actually passing people on the hills, and was moving along at a reasonable pace.  All went well for about 7km, when I failed (yet again) to negotiate the turn from #5 down #26 – where Helen is pictured in yesterday’s posting.  This time I bashed a thumb, which though not life threatening, remains swollen and  mildly painful.

It was another warm, sunny day, clouding over later with snow flurries.  Lovely.  At the back end of the field most participants were enjoying their day out, the only ‘race’ being with the cut-off times, which quite a few were worried about.  So I had some nice chats along the way and soon realised that given the excellent waxing of the skis, being ‘cut-off’ was not really a worry.

I carried a few spares in a bum bag – clothes, two pairs of gloves, waxes, first aid kit, food, etc, but it never got opened, the drinks and food being provided by the six or so feeding stations along the route being more than adequate.

It’s not a flat route – there’s about 900 metres of ascent, including several steep hills that have to be ‘herring-boned’.  It was after one of these hilly sections (trail 15) that we emerged past Pink Lake onto Gatineau Parkway and down to ‘The Notch’, where there’s a support point.  Here, after just 15km, I spotted Susan and Roy, just ahead.  They remained that way for the remaining 36km – a target – though they never saw me or heard my shouts of encouragement from just a few metres behind them on a couple of hills where I was quicker.  I just didn’t have the technique to keep up with them on the flatter sections, and they eventually finished just a few places ahead of me.

We all met Ken coming the other way where there’s a little loop in the route around Huron Cabin.  He was nearly 30 minutes ahead of us at that point and finished even further ahead, in a very commendable (for an ex-pat Brit) 4 hours 17 minutes.

Whilst the klister was great for going up hills, mine was affecting the downhill glide over the last few km, but not enough to do anything about it.  I’d expected to take about 6 hours for the 51km, but by some miracle came in just under 5 hours.  I didn’t see any of the other Brits in the race – one finished an hour ahead of me and the other two were two hours behind.  So if there had been awards by nationality I’d have got a silver medal!  As it was, we all got a Buff.

For my own benefit as much as anything, the Loppet website is here, the results are here, and my Garmin gadget’s data is shown below:

Congratulations! 51 kms is no mean feat! I hope you all celebrated in style.

Thanks everyone. We did celebrate in style, so far as we could, as Ken had to prepare for a repeat performance on skate skis today!