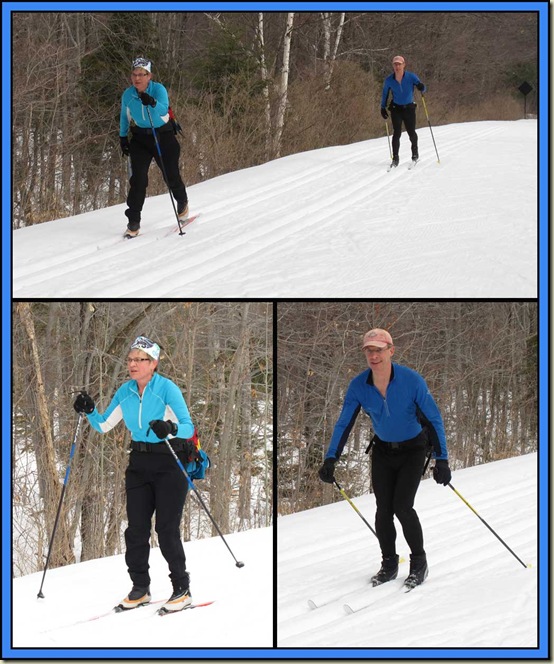 If someone who enters a ‘Loppet’ is a ‘Loppeteer’, Susan and Roy fit that description.  Today they had me up at the crack of dawn for a 20 km ‘whizz’ around the Parkways of Gatineau, to record (see pictures above) their final training session for Saturday’s 51 km Classic Ski Loppet.  I have opted out of their final training session tomorrow at the Spa, principally because Roy has borrowed some essential equipment for that pursuit.

A Loppet is a ski race.  They are held all over the world.  Where there is snow, obviously.  Ottawa’s weather system is preparing for the weekend’s events by way of … a rainstorm.  It’s lashing down outside.  So conditions could be interesting.

Today’s Parkway circuit followed a route that I took last year.  Then, with my blistered heels, I timed it at about two hours.  Today I was fitter, but the route took an extra 30 minutes.  Not because Susan and Roy held me up – the opposite was true – but because the conditions were… a little sticky.  For example, on moving out of the groomed trail to take the above photos at the top of Fortune Parkway, I found that about three inches of ice had glued itself to the underside of my skis.  Even Susan and Roy’s waxless wonders were behaving as if threading their way through an ocean of white glue.

It was slow going.  I broke another basket (the thing at the end of the ski pole that helps with traction) – it must have become glued to the tacky surface.  Another repair for Ken to help with.  He won’t be happy!

We certainly earned our Hot Chocolate at the cafe in Chelsea.