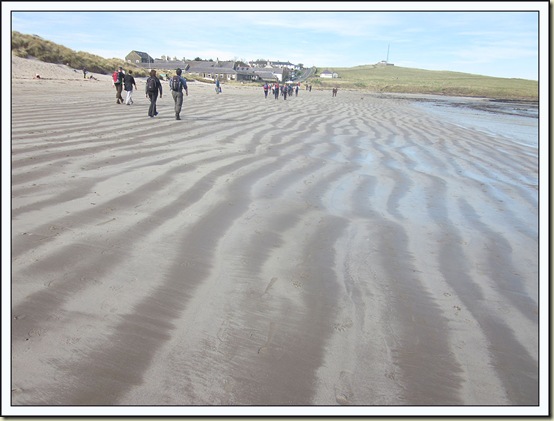 Well, it hardly seems a week since we were setting off on this trip!

The ‘Local Pub’ Arms met our little sub group’s requirements, with a good value two course offering.  Then GS’s 'pre-booked’ group of about a dozen turned up, much to the surprise of the restaurant staff, who had received a call from the ‘Local Pub’ Arms in a neighbouring village along the lines of ”Have you seen our customers?”  The answer of course was “Yes, they are eating here.”  The (other) ‘Local Pub’ Arms were not amused and are no doubt being overwhelmed by GS’s apologies for this stupendous ****-**!

With about 20 cars between us and room for only just over half of those in the car park, also used by residents of a nearby house, ‘Mayhem’ could accurately describe Saturday morning’s assembly outside the hostel.  Some left to attempt a linear hill ‘bagging’ route, whilst 19 of us assembled for a lower level outing from Wooler.

These three looked cheerful enough, as they gathered for the leaderless stroll. 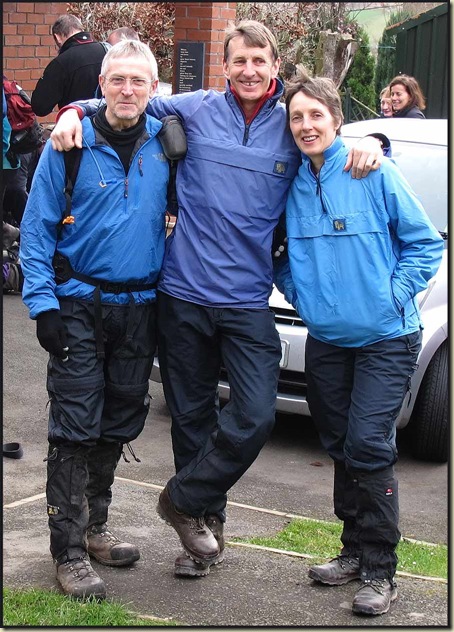 Various maps were surreptitiously fondled as we headed off along the St Cuthbert’s Way footpath, which I’d thought was the intended route to the Iron Age fort on Humbleton Hill that I was told was our first destination.

So when everyone paused at a path junction, I strolled on along the St Cuthbert’s Way path, expecting to be followed, unaware that an intermediary destination, Coldberry Hill, had been inadvertently inserted into the plan.

Anyway, I enjoyed a potter around the remains of the fort, which possibly dates back to several hundred BC, before all 19 of us gathered for elevenses on the sheltered side of the hill on this somewhat chilly day. 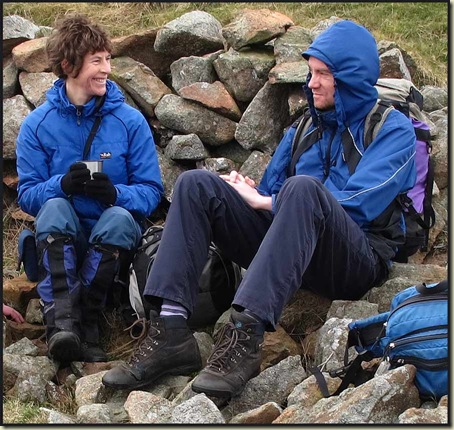 It was altogether Very Jolly (see slideshow – link below - for more pics of people being Very Jolly).

Further on, another 'Fort & Settlement' was visible from the summit of Gains Law (319metres), with good views back to Humbleton Hill and the dry valley to its south.

After some discussion a consensus was reached whereby we would continue to be leaderless but would follow the St Cuthbert’s Way path - a 100km (62.5 mile) long distance walking route across the Scottish Borders to the Northumberland Coast following in the footsteps of St Cuthbert - all the way to Tom Tallon’s Crag.  Here’s part of the assembly, striding out along the broad path, with the Northumberland lowlands stretching towards the coast in the background. 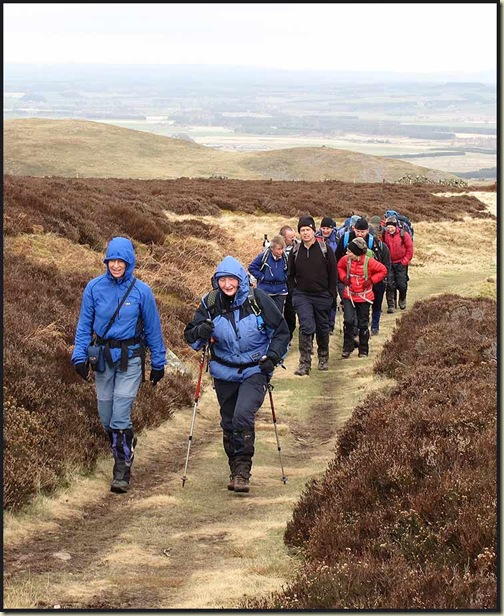 There’s a high (815 metre) hill near here called The Cheviot.  It has a reputation for trapping the unwary in a morass of mud and bog, and on this day you could add cloud to that list, so we observed its grey flanks with some pleasure that it wasn’t on our itinerary.  Nor was it worth capturing on ‘film’ (or ‘phillm’ as they pronounce it in this far flung extremity of the UK).

All apart from Colin had attentively listened to the plan to conquer the immense boulders of Tom Tallon's Crag – at 353 metres the highest summit, if not the high point, of this walk, so whilst he hid out of the wind in some heather by a path junction, the rest of us enjoyed a break in the shelter of Tom’s two foot cliffs. It was still early, so lunch was delayed until  we had trudged along a few more little red dots to Commonburn House.  A quick dash from the vanguard ensured a nice grassy bank, out of the wind, for lunch, somewhat to the disgust of a group of youngsters heading for the same spot.  There were quite a few people about in this area.

Some of our group chose to head directly to Broadstruther, as planned (apparently), from here, leaving about a dozen of us to enjoy a longer walk that took us first past one of several walled enclosures in the area, still completely intact, presumably used for corralling livestock.

A rough track across the moor delivered us to the edge of a wood above Goldscleugh.  Here something 'spooked' Sue W, who rushed up a tree in a bid to escape. 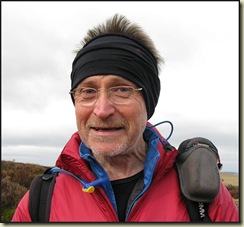 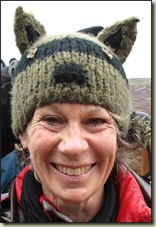 A good path led through the wood towards Goldscleugh, where the blare of a hunting horn was unmistakable as we looked down to the dilapidated farmstead to see a jolly band of hunters with their pack of hounds.  Whilst seemingly a bit ‘posher’ than our rag tag (Colin excepted, he has a big posh car) band, the hunters – who had no booty – couldn’t have been more friendly. 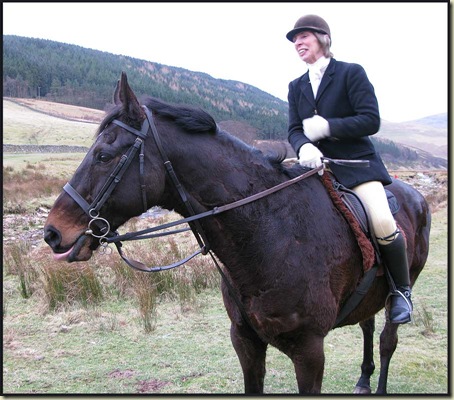 “We were drinking and chatting whilst the boss got bogged down, the fox made a break for it and the hounds got lost” – I think that’s the gist of what she was telling us.

The route from Goldscleugh led up to a final tea break after a few dark mutterings as we negotiated our way along a ‘path’ that had once run through the trees of a now felled forest.

Eventually we reached a cottage at Broadstruther, which those on the 'short route' had passed some time earlier.  At first we thought it might be a bothy, but this place was far too smart to warrant that description.*

Wide paths and sturdy bridges then ensured an easy passage back to Wooler.  Just as well, as people were starting to flag.  Some were nearly asleep. 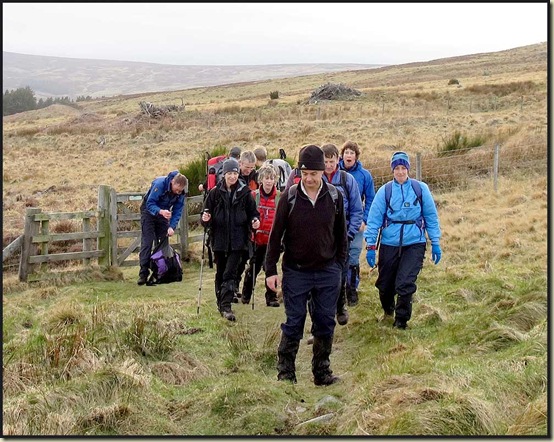 Fortified by Sue’s Saturday night soup, stew and cheesecake, the assembled gathering, apart from those who had gone gone ‘sick’ (though Sue isn’t getting the blame for spreading chicken pox), managed to summon the energy needed on Sunday morning with which to consume their second ‘Ken’s Big Breakfast’ of the weekend.

Then some folk went home, but the majority pottered over to Craster, where we set off along the well worn path towards Dunstanburgh Castle.

There were quite a few of us on this walk! 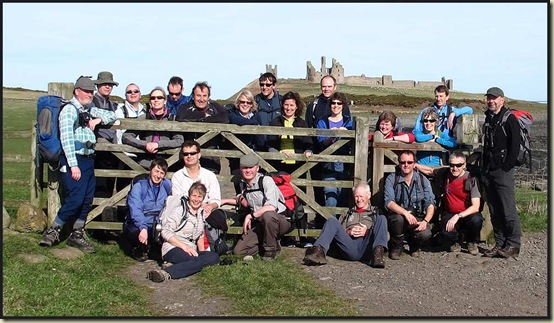 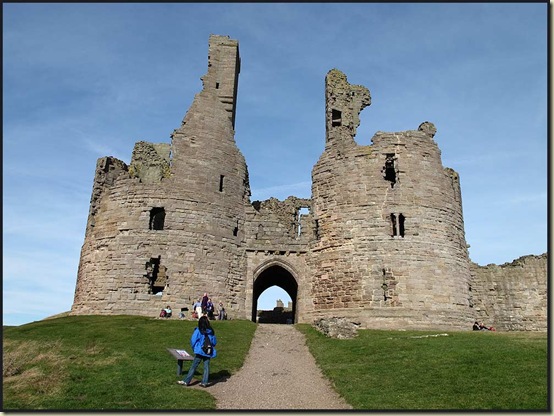 Embleton beach provided a sunny spot amongst rock pools for elevenses and a sunbathe or paddle for everyone except me.  I had urgent business back at Craster having left the fridge turned on.  Flat battery averted, I returned in time to join those who hadn't succumbed to the lure of their long journeys home, for the final stroll over firm sand (pictured at the head of this posting), with trees, on the approach to the fleshpots of Newton. 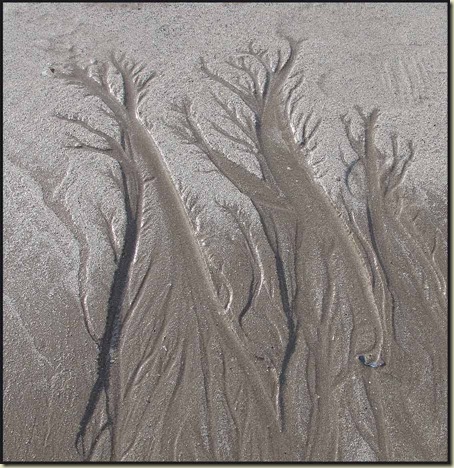 It was 'beer o'clock' by the time we reached the Ship Inn, from where some of us left with sunburn. 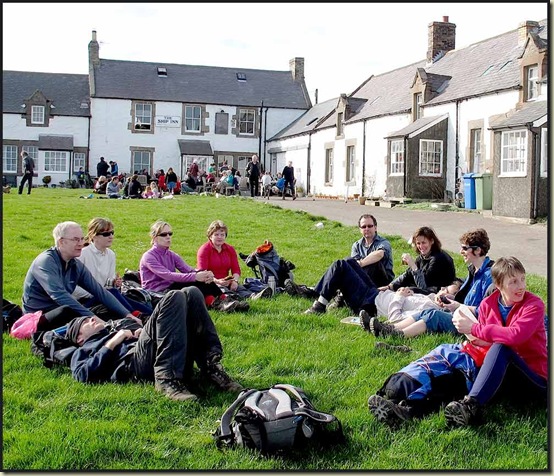 Pied Wagtails skittered across the roofs at the back of the pub. 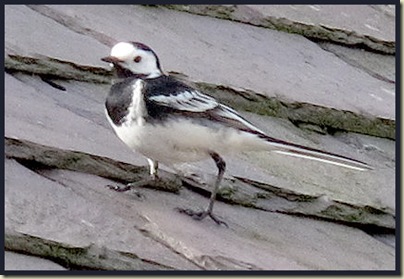 Toads were abundant on the walk back to Dunstanburgh above the beach.  They were piled on top of each other like little dumps of dog poo.  Care was needed.  Clumsy feet squash toads!

Dunstanburgh Castle drew ever closer, and here Sue and I said our goodbyes and went off to explore the castle (see slideshow) whilst everyone else went on their way. 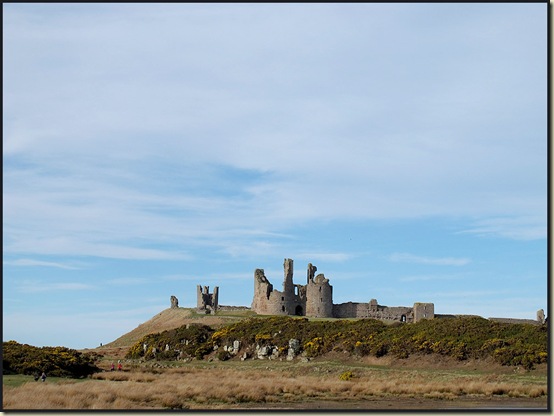 Then we also went home... 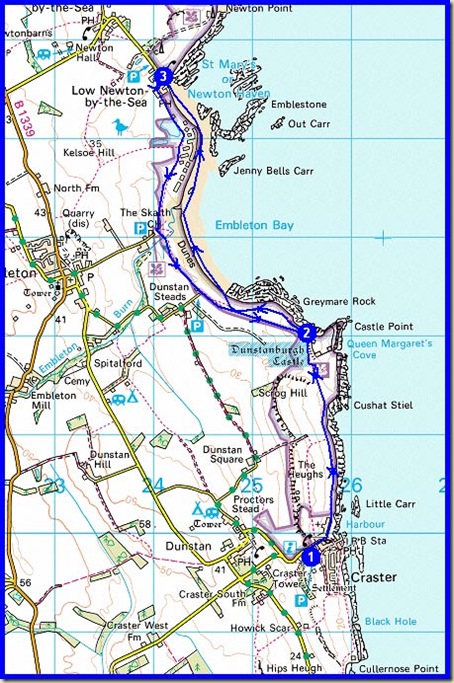 There’s a full slideshow here if anyone is interested.

Saturday: Skylark, Lapwing and Curlew returned to the moors for breeding.

Sunday: Yellowhammer and Linnet, Oystercatcher and Eider at Craster; Fulmar, Razorbill and Kittiwake returned to sea-cliffs to breed. Seal basking in the bay at Craster as well.

* According to the internet, Broadstruther was “a totally derelict farm, the main building had no roof and the walls were in a state of collapse. On completion the new building will be used as a luncheon facility for shooters on the Lilburn Estate.”
Posted by Phreerunner at 14:37

I'm receiving too many emails along the lines "not enough abuse of GS". I'm sorry about this, but it's done now. I'll try harder next time.
Martin