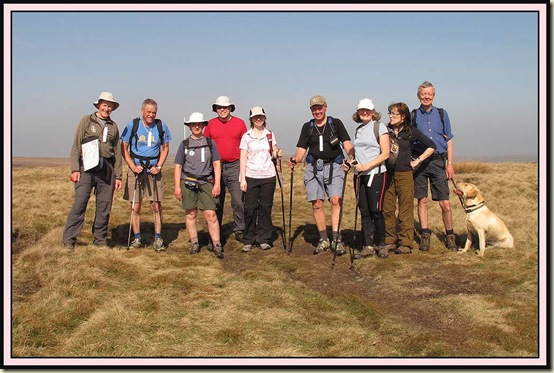 From the 8am start in Tottington, it took us about 4 hours to reach Bull Hill, on the ‘short’ 18 mile route taken by this LDWA Challenge Walk.  Our little group from Timperley plus hangers on was nevertheless taking it easier than most, buoyed by JJ’s superior lethargy and jokes.  Here we are, Martin, John B, Judith, Alistair, Moira, JJ, Viv, Jeanette, Paul and Bailey, lined up by the trig point, all in aid of Alistair’s surreptitious ‘ticking’ of a HuMP!

Earlier, we had started bleary eyed after the clocks had gone forward by an hour, and my stomach had been less than compliant all night, so I for one was pleased to find some friends who were doing the short route, giving me a good excuse to abandon my planned long route (25 mile) challenge.

After a ‘mud dunk’ near the start, we passed the Pack Horse Inn at 9am.  Alistair posed by the doorway, already looking for 'refreshments' on this hot summery day.

Nearby, we took turns posing by Affetside Roman Cross - the first of the Two Crosses on this walk, this one situated on the ancient ‘Watling Street’ Roman Road from Manchester (Mannucium)to Ribchester. 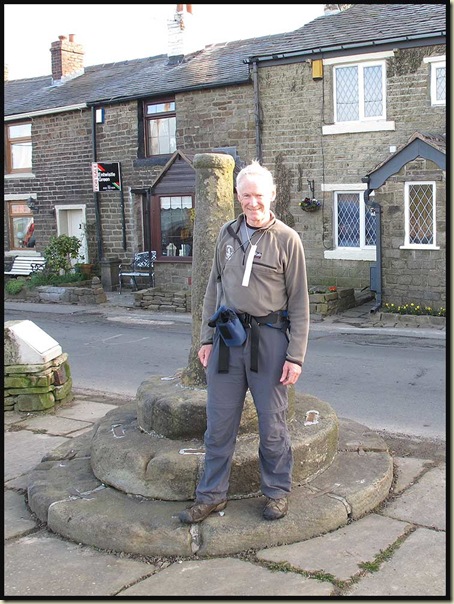 Jumbles Reservoir was very calm, unlike Check Point 1 – where no refreshments were on offer, just the bizarre sight of a refreshing haircut on offer from a maniac masquerading as a 'Master Plumber'. 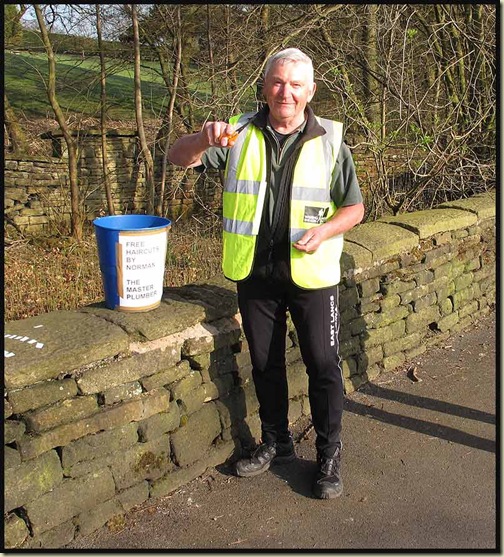 Beyond here, we encountered the splendid castellated railway bridge by Turton Tower, and a series of minor ascents as we gently perambulated along the Witton Weavers Way.

JJ cracked a few jokes in an effort to jolly everyone along to Check Point 4 – where there was no sign of any Master Plumber (thank goodness) but lots of tasty morsels.  We stayed for ages, watching loads of folk who had already done the extra seven miles of the long route speed through.

Amorous Canada Geese broke the glassy surface of the nearby Turton and Entwistle Reservoir, as we hastened on towards….

"Oh no!" exclaimed Alistair "we can't walk past this" ... "can we?", as The Strawberry Duck failed to secure our custom.  There has to be a first time for everything, I suppose.

We cracked on at a steady 5kph (3mph), slowing only when it got the better of JJ’s bowels.  JJ further slowed us to Moira and Judith’s more reasonable pace by stubbornly taking the lead, pretending he was the only one who knew the way.

Then Alistair and I decided to ‘bag’ Bull Hill, and were a little surprised when our entire group followed.  “It's a 'HuMP'” announced Alistair, after consulting his on-line Hill Bagging List - “a hill with a Hundred Metre Prominence”.  Alistair is a HuMP spotter.

We headed off the hill, JJ still in the lead.  But the diversion had thrown him.  We weren’t exactly going in the wrong direction, but we had missed a checkpoint.  So the marshalls at Check Point 6 were slightly surprised when 9 of their 300 or so customers suddenly appeared from behind their wall, ie from completely the ‘wrong’ direction.  We were disappointed to find that the marshalls had got so hot lugging up their barrels of water that they’d drunk it all.  They did however offer a well stocked bar – sherry, whisky, beer, etc, though I was still feeling queasy and others eschewed this fine facility.  Shame!

A little further on we arrived at the second of the Two Crosses on this walk - Pilgrim's Cross on Holcombe Moor.  Dating from ancient times, the cross was removed at some point in the mists of time, to be replaced in 1902 by the current structure, which makes a nice seat.  Here, David and Bill were enjoying a beer or two in the sunshine.  We debated whether alcoholics should be allowed on Challenge walks.  JJ asserted that ONLY alcoholics should be allowed…

Three ponies kept us company from here, all the way to Holcombe Brook, where one of their number spent ages splashing itself in order to cool down, much to the amusement of the riders.

Our next objective was Peel Tower, a monument to Sir Robert Peel constructed in 1852, where there were lots of refreshments on sale and the scene was much as it would be on a sunny summer’s day. 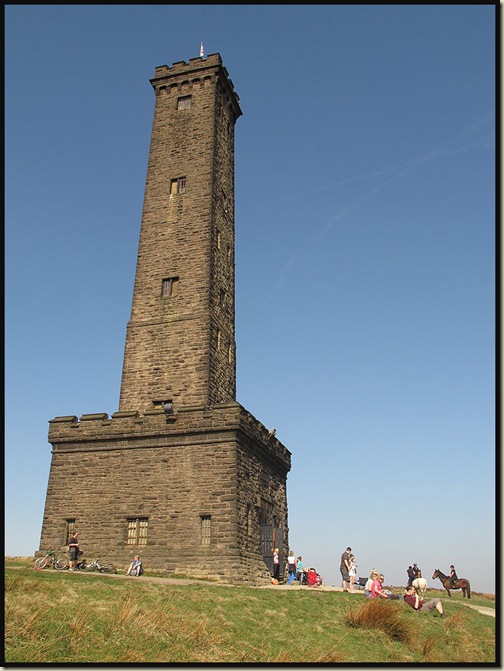 We enjoyed good views north to Haslingden and Rawtenstall, but any effort to look south was greeted by a blinding sun and its associated haze.

By the time John B had slithered down a unique approach to Holcombe Brook, and we’d watched the antics of the horse in the brook, the others had disappeared.  So John and I plodded on to Check Point 7 – and, would you credit it, there was that Plumbing barber again...

“Where’s JJ"?” we asked.  “Where’s JJ?” reciprocated the barber.  Would you credit it, he’d missed another Check Point, and after a while appeared with his entourage from completely the wrong direction.  And he thought he knew the route like the back of his hand!

By now the end was in sight (figuratively speaking) and the sun was still shining as we passed Greenmount United Reform Church, before heading down a pleasant disused railway line and back to Tottington Youth Centre for tea and soup and lots of other refreshments for those without upset stomachs. 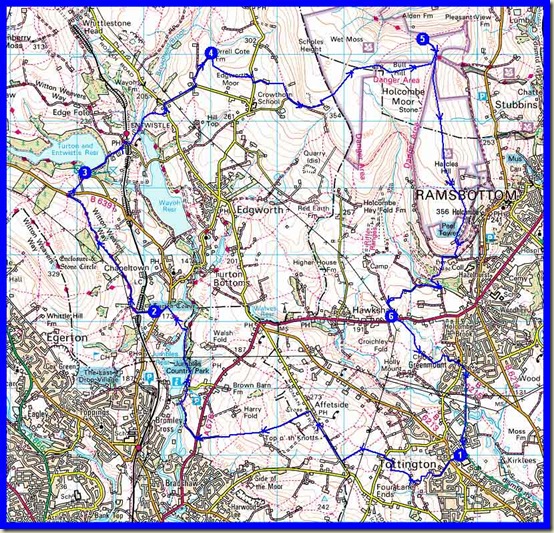 Thanks go to everyone at East Lancs LDWA for organising such a splendid walk, with excellent support (away from the maniac barber) and lots of good food.  The weather was pretty perfect as well.

There’s a short slideshow of my pictures here, and Alistair’s excellent blog entry is here.  The LDWA’s ‘Two Crosses’ page is here.

"After a'mud dunk'" - I have this vision of you all lining up for some sort of ritualistic immersion in a huge tank of mud prior to setting off!

Gibson, the route was remarkably dry - you can see that many of us wore trail shoes - apart from one ginnel near the start where we took turns to tiptoe through a black gooey 'dunk' edged by holly bushes. I should have taken a photo!

I'm glad you kept Alistair on the straight and narrow! His hill bagging has got worse since he discovered hill-bagging.co.uk as did mine...

Glad to see you kept Alistair away from the pubs! His hillbagging got worse once he discovered hill-bagging.co.uk!

A grand day out I thought.

You missed out the third pub we passed: The Bull's Head in Greenmount!

It was indeed an excellent day out walking :)