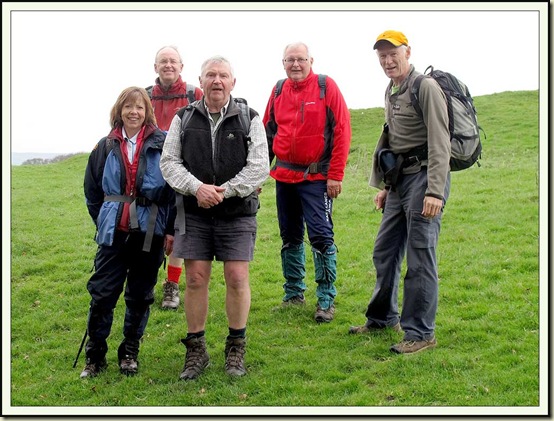 This penultimate stage of the East Lancs LDWA’s Lancashire Trail ‘Plod’ will officially take place next Wednesday 18 April, but those of us who can’t get to that event enjoyed the privilege of joining Reg on his ‘recce’ of the route.

In the event, the original route from over thirty years ago was proven to have stood the test of time, unlike some of the earlier sections that had needed adjustments following Reg’s recce’s.

We started from Whalley in a jolly mood - Nancy, Jim, Norman, Reg and Martin, as pictured above on the ascent of Clerk Hill, on a rather overcast day that had the pessimists reaching for their waterproofs and the optimists (Reg and me) ignoring any moisture and relying on our fleeces.

A boiler with a big chimney was reminiscent of the early days of steam.  Norman, clearly the only person amongst us who was old enough to cast his mind back to those days, announced "I'm a Master Plumber, I can get this going." 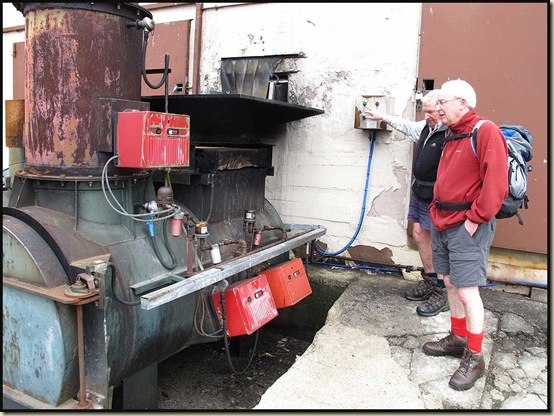 A hasty retreat was made from Wiswell Moor Houses, from where the nearby hills to the south east were lounging under a light haze.

Did this fine sign herald the time for a decision?  Not really, the Nick of Pendle was our clear and easy objective. 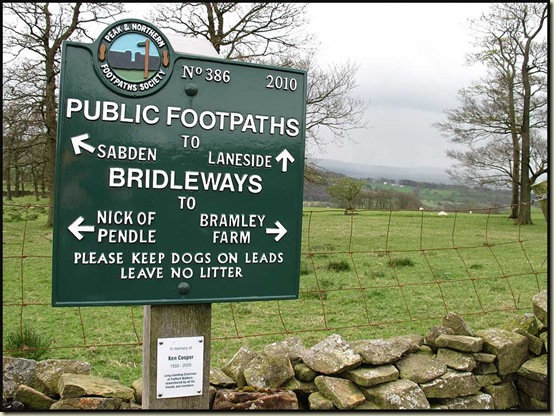 A good path led towards the Nick.  Suddenly, Norman and his cohorts turned on their leader - "It's gone eleven, why haven't we had a tea break?" 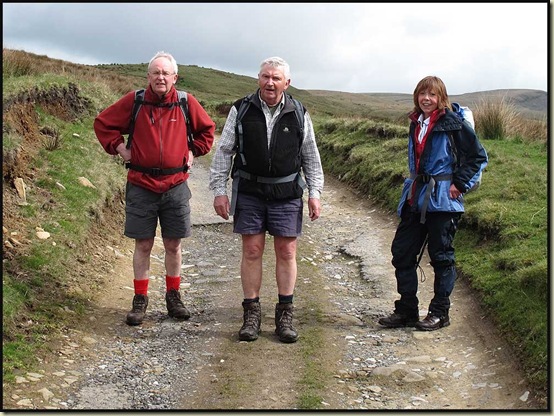 "Ok" replied Reg, and we all sat down.

From beyond the Nick of Pendle, expansive if dull views drew the eye far beyond the cement works of Clitheroe.

There was a good path by Ogden Clough, where the sun made a brief appearance. 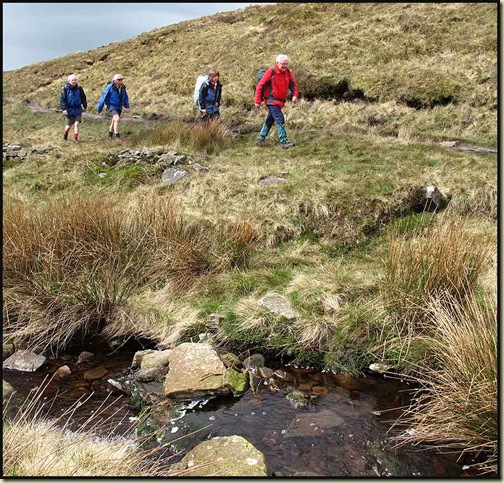 Pendle Hill - 557 metres – was eventually summited.  The summit plateau was gained via a superb stone pathway, a great improvement over the eroded bogland that I recall from my youthful visits to this hill.  There were fine views in all directions, albeit a bit hazy, with the distinct outline of Ingleborough hiding behind Norman’s vast bulk. 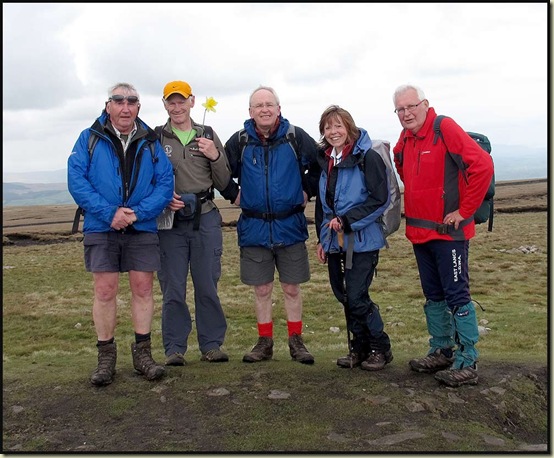 Norman (The Clown) tried to fly. "Oops" he exclaimed "I think I’m too heavy for this!" 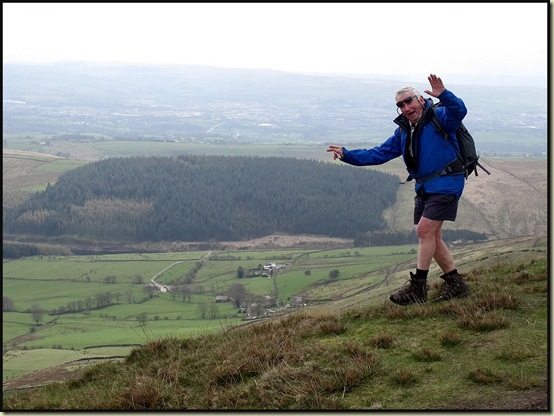 We met two reprobates with china mugs and large lunch boxes.  I hadn't seen Dave since I bought his old mountain bike from him last year, so we joined the jovial duo for lunch and a chat. 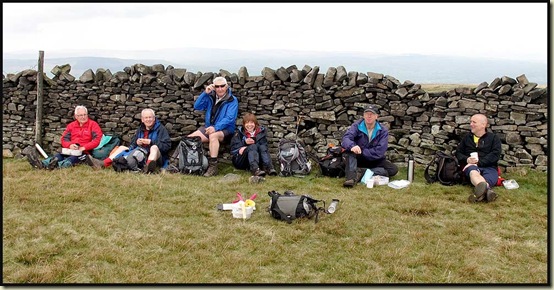 Norman and Nancy were tickled by Dave and Alan’s choice of crisp manufacturer. 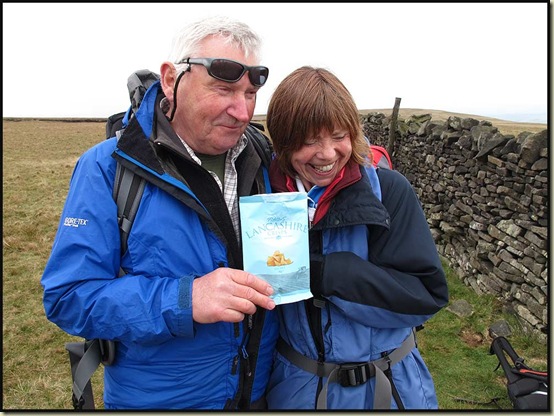 These two jokers were soon seen descending to Barley, hand in hand, with Clenched Buttocks (it’s a long story).

We passed a stream whose banks were loaded with Primula. 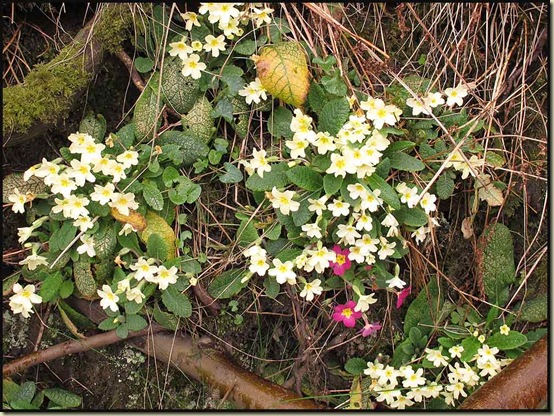 Looking back to Pendle Hill, it seemed quite small to me, but I suspect it is the high point of this route.

A fine cobbled path led inexorably to the fleshpots of Barley – a restaurant and a pub, and a cafe…where we all enjoyed a coffee. 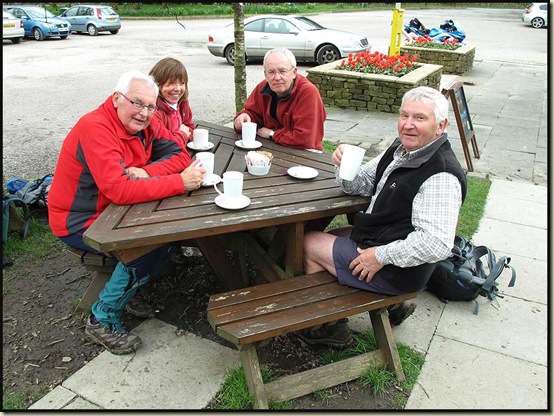 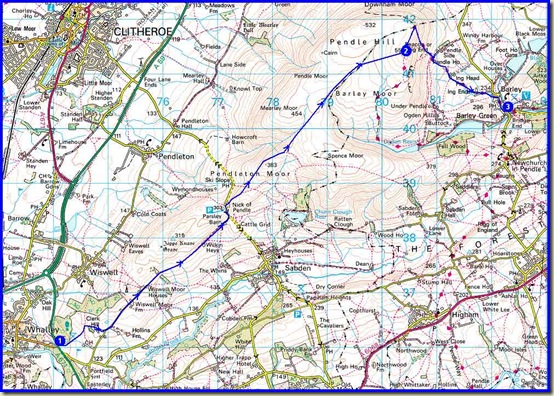 What a pleasant day.  I hope the actual ‘event’ proves to be as enjoyable for those who go along next week.

My photos from the day can be viewed as a slideshow, here.

Nice walk.
You had reasonable weather.

What a pity that pensions are so small nowadays that some could not afford a complete set of trousers. :)