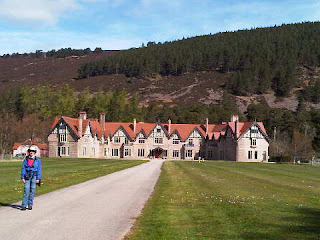 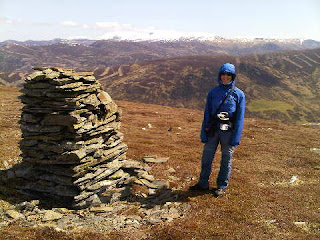 Weather: warm and sunny, with a light SE breeze

Other Challengers encountered: 'Big John' Hutchinson on the trail, and numerous others in Braemar.

Flora and Fauna: rabbits in Simon's garden and hares on the hill, golden eagle floating over Inverey.

Mar Lodge's cooked breakfast was limited to a bacon roll, but the bacon chef was on form and the cold plates contained an excellent repast. So much so that to our table's bemusement Freddy pottered in, rucksack loaded and ready for the hill, and scoffed a selection of items from the other table before wandering off again.

By the time we left at nearly 10am the campers had all gone and the ballroom had been emptied and cleaned. We had also discovered that our next destination used to be owned by Jane Torrance's family before being sold to our friend Simon. It's a small world!

Big John came storming up the driveway in search of tea and cake. He got shortbread. With a broken walking pole and half his specs missing he looked a bit battered. He related tales of seven major river crossings in one day - this Challenge seems to have been quite an adventure for many of the participants.

Mar Lodge (pictured) looked splendid in the morning sunshine as we strolled down the drive.

Our walk up to Carn Mor was blessed by sunshine and monitored by hares. It was a pleasure to be out on such a lovely day. A phone signal, the first since Blair Atholl had us pausing at each message's bleep, then tea was taken at the summit whilst we assimilated the news. Thanks everyone for your comments and text messages and we are pleased to hear that you are enjoying this series of posts.

Well done also to my son Mike who did the Manchester 10K this morning in a creditable (for a non runner) 57 minutes, and thank you to all who sponsored him.

There were great views of the Cairngorm summits stretched out before us. Then when we reached Carn na Drochaide (pictured) even more views were open to us, with the Lochnagar massif looking enticing to the east. But the snow could be deep and soft in this summery weather.

Easy ground soon led to the track to the 859metre summit of Morrone, where we spent a pleasant 45 minutes with Big John.

This summit, though the highest of the day, was the least pleasing of the three as it's festooned with radio masts, and a car was parked on the summit - there's a service road. One of the buildings is the Brian M Goring Radio Relay Hut, erected by Braemar Mountain Rescue Association with funds donated in memory of Brian M Goring, who died of exposure in the Cairngorms in April 1967.

David? arrived, totally free of any pack on his day walk from Braemar, to chaperone the lumbering and half blind giant masquerading as 'BJ' down the mountain.

Meanwhile we romped into Braemar to find Alan Sloman and Andy Walker just about to leave the Fife Arms to join Lynsey Pooler's birthday party at Lochcallater Lodge. "Where's 'Very Poor David?" I enquired. "Broken" they reluctantly admitted, explaining that they had left the third member of their team in a ditch near Spean Bridge after about three days, with only a bottle of red wine for company! "'Poor Michael' sends his regards", I chirped, having received that message from my erstwhile companion (who I am pleased to say I didn't break) a couple of hours earlier.

Red wine was also being tippled by Laura and Louise, who we joined for a couple of hours in the pub, where it was great to find Stefan in good form and going well, and David (whose exploits in the Pyrenees we had followed) and his girlfriend Tanya, who was clearly enjoying the Challenge experience.

Unfortunately Laura has had to give up due to storm inflicted problems, and that may work to our advantage tomorrow - but ... bad luck Laura.

We also received news from Markus, the Austrian Challenger, who had embarked on a Fort William to Cape Wrath walk. Unfortunately he has given up and gone home, after some scary adventures with water. It seems he omitted, perhaps with wildly misguided optimism, to pack his waterproof trousers, and suffered a rucksack failure as well. His detailed account should be interesting.

A call to TGO Control later revealed that despite record numbers of drop outs, the octogenarian La Borwit and Fowkes teams are continuing to romp inexorably through the Scottish glens towards Montrose.

Around 6pm we located a large key that had spent the Challenge as ballast in my first aid kit. It was now brought into use and magically gained entry to Thornbank Cottage, to where we adjourned for a pizza supper, courtesy of Simon and Kat's freezer. We also found a convenient machine with which to remedy the problem of our smelly clothes, so spent the evening in front of the fire in dressing gowns that would have looked a bit odd in the Fife Arms!

And finally, here's a bit for the connoisseurs, this time on the subject of today's destination.

"Braemar, or Braigh Mharr in Gaelic (which finally died out locally as a spoken language about 1900), is not only redolent with Scottish history, but is a land of superlatives. It is the highest and most mountainous parish in the UK, with each of its 182,000 acres being more than 1000ft above sea level (the Post office, in the village centre, is at 1110ft).

The area contains within its borders some 24 Munros, and for the visitor interested in wildlife, Braemar has long held great attractions. There must be few villages where one can take an early morning walk along the village main street and have a good chance of meeting, one after the other, a magnificent 13 pointer stag, a shy roe deer, red squirrels stealing nuts put out for the birds, a cock pheasant strutting in all his finery, and a big brown hare timidly exploring the possibility of access to some of the gardens, while overhead golden eagles and buzzards sail silent, missing nothing.

Devotees of Highland Games can, in September, accompany Her Majesty Queen Elizabeth to the great Braemar Gathering, reputedly founded in the 11th Century by Malcolm Canmore, used as a front in 1715 by the Earl of Mar to plan the first Jacobite Uprising, and which has been run in its present form since 1832 by Braemar Royal Highland Society, the oldest surviving Friendly Society in Scotland."

Good post as always Martin. I’m glad my crossed fingers have brought you good weather. I can now uncross them as they are going numb through lack of blood flow.
Sorry to hear about Laura, such a shame. I presume Louise is carrying on.

Sounds like an excellent day to be on the hills! And it looks like the weather is going to stay good for the rest of the Challenge.

I was out walking in the Braemar area myself yesterday: Isabel & I walked some of the way up to Lochcallater Lodge with Lynsey in the afternoon sunshine :)

I hope you have a good final few days walking and I'll probably see you in Montrose later in the week!