A Nice Day For A Bike Ride - The Mary Towneley Loop 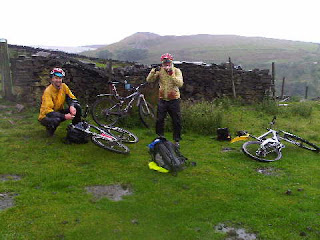 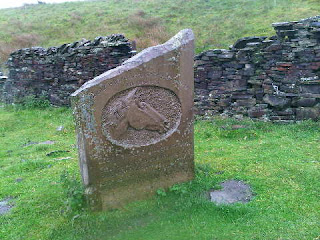 First, a short mention of last night's mini adventure. An evening walk had been planned from the Silverdale Hotel, so after Sue had picked me up from the station we headed off for a bite to eat at the hotel. 7.30 came and went, and nobody had turned up for our traditional mid-summer's walk. Not really surprising given the torrential rain outside.

"I've come for a walk, so I'm going for a walk" dictated The Boss.

So we enjoyed a pleasant circuit - along the beach then across to Far Arnside to the path up Arnside Knott, which is a good viewpoint - recommended when the rest of the Lake District is engulfed in cloud. Tonight Arnside Knott was itself engulfed in cloud. We took some photos in the rain. I may get time to download them one day.

A steep descent through dark, wet woods (Jenny wouldn't have liked it) and a pleasant if rather damp stroll back via Arnside Tower, Elmslack and the Cove, ensured that we got back to the car in time to get home from this rather energetic three day trip by 11.30...

The alarm went at 6.30 today. It was still pouring down, but Mike, Robert and I had a long standing engagement with 'The Mary Towneley Loop' - a 47 mile bike ride in the South Pennines, all off road, with about 2300 metres of ascent.

A tough day out.

We met at 8.30 as planned at a picnic site in Waterfoot, despite being baulked by a closed motorway and a lack of signage to the picnic site. It was raining hard but we set off in good spirits and after quite a while we reached the plaque to Mary Towneley, pictured above with a picture of Robert and Mike at the same point. The phone with which the pictures were taken spent the rest of the day in a waterproof bag. My wet weather Ixus (once drowned) camera decided not to work - again - it was fine afterwards (again).

It was at this point that Mike started to shiver. "I may not get all the way round" he offered. I thought about this whilst cruising down the next section of 'path', or should I say 'river', as today the Pennine Bridleway that forms the basis of the Loop had acquired the persona of a river bed, with the contents in spate. Perhaps that's why we didn't see any other cyclists today...

I had a wet bottom. "Probably because your overtrousers have split" observed Mike, between shivers.

"You might have a wet bottom" chipped in Robert "but my waterproofs from Aldi have a 'fit for purpose' issue".

So I was nice and warm, if a bit tired, and therefore on the slow side, Mike was cold, and Robert was wet. We'd been going for over two hours and were less than a quarter of the way round the Loop. It was 'tipping down'. We felt as if a whole month's rain was being dumped on us in one go.

"I didn't get wet at all on the TGO Challenge" commented Mike, "but I am now!" "Same here" I muttered, from a wet bottom.

So, on reaching Long Causeway Road, a long straight road beside a windfarm, we decided that as the camera I'd brought to record our exploits had failed, there was no real reason to continue.

We left the Loop and headed down the road to Todmorden, where a café was remarkably understanding and fed us with tea and coffee and huge baked potatoes, in return for very few notes and a large puddle on their floor - "Don't worry, we have a mop" they jested.

It's quite a pull over to Bacup and Waterfoot from Tod. The wind was gusty and the rain at times torrential. Rivers were full to capacity or more. I walked on the verge for a mile or two - safer, I thought. I didn't want to be blown into the path of an HGV.

By the time we got back to the picnic spot at about 3pm we'd covered about 47km (30 miles) in about 6 hours. Had we attempted to continue around the Loop.... we may still have been there (waiting for the camera to start working, obviously). The rain didn't abate until much later.

A sort of heroic failure, can perhaps describe our day. But some might think us foolhardy to have set off in the first place with a camera that was known to be a bit dodgy.

I really rather enjoyed it. I hope Mike and Robert did.

We'll crack it one day!

Yes, setting out with a faulty camera in such poor conditions is very poor judgement indeed. What would the rescue services have said about such a cavalier approach?

Hi Martin - just caught up with your blog. Thoroughly enjoyed reading the Beinns Eighe and Alligan comments from last week. Bought back some great memories of my favourite Scottish mountains. Love to you both.

I think i would rather have a busted camera than a wet bottom.

It's a shame the ride had to be abandoned due to the faulty camera. The Heroic Failure had absolutely nothing to to with the imminence of hypothermia amongst the ranks.

Luckily we had vacated the cafe in Todmorden before the river chose to pay them a visit.

A cracking day to select for a challenging bike ride!

If you want some pics of Arnside Knott on a good day see the last post but one on my blog. If you had come up there yesterday you would have seen going on for a hundred people attending a wedding of friends of men who live just down the road from me. I hope to be doing a post on this with pics shortly.

I'll look at that, Conrad. I do know the view well though, and it's a fantastic little hill. Love it.
We half expected you to join us for a beer in the Silverdale Hotel!