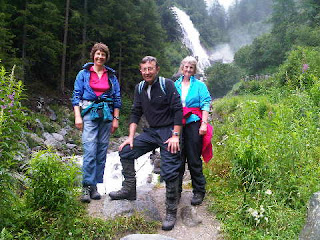 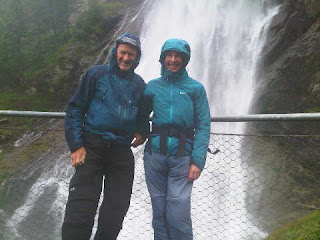 Sue is devastated. Her date with an Austrian pin-up was cancelled. Due to bad weather. Not that it has been particularly bad, but with the cloud base still at around 2000 metres the promised 'airy traverse' would have been more like a 'hairy traverse'. So it was pulled from the itinerary.

Instead - after so much fuel from Erica's breakfast - we felt obliged to take some exercise, but at a lower level. It was drizzling and the cloud base was below 2000 metres. So we jumped onto a bus so crowded that the driver had to 'phone for back up, and headed about 20km down the valley to Umhausen.

English voices were heard as we disembarked. "Hello's" were
exchanged. We had bumped into 008. "My name's Bond" joked Bernie, who apparently quite often gets pulled to one side when travelling. This Master Plumber from Ingleton kept us entertained all day with his stories from life as a 'domestique' cyclist to Alan Ramsbottom, to days spent with Fred Dibnah photographing the mine shaft he dug in his Bolton garden. "Who the *** was Alan Ramsbottom?" we asked. Well, "he was Tommy Simpson's 'domestique'" came the reply.

We'd planned to start the day by visiting a waterfall, the Stuibenfall. It finished up taking all day. It's quite a high waterfall that comprises a series of cascades beside which five viewing platforms have been erected, and for the adventurous there's a Via Ferrata route with thick cables and very solid looking stemples.

We took one look at the height we'd have to climb - part of it anyway - the top was in the cloud, and adjourned for coffees.

Then Sue insisted on having her photo taken with 008 and his lovely wife Janet (top picture), before we set off up the path. It turned out to be a 450 metre ascent (rather pleasant without a rucksack) with frequent pauses to view the various sections of the waterfall, which in a number of places has worn away the rock to create bridges that not even 008 would deign to cross.

One viewing platform in particular was designed to give the viewer a good shower, even if it wasn't raining. Bernie insisted on capturing the moment! We got soaked...

Anyway, when we got to the top it was lunch time. So we nipped into a nearby mountain restaurant and enjoyed a slap-up lunch (we are on holiday after all) before ambling back down to Umhausen for the 3.55pm bus back to Sölden.

[I should mention that when registering in accommodation in these parts you get a receipt that works as a 'Guest Card' and gives certain concessions, like half price bus fares. That would have saved us €10 today if we hadn't lost the card.]

That left plenty of time to shop for provisions for a hearty meal at Haus Wiesenblick, and replace my map number 43 (Ötztaler Alpen) which had decided to become a map of many parts. The new map, whilst still being only 1:50,000, is so different that it looks as if it has twice the detail. On closer inspection, it does have twice the detail! Such as 40 metre instead of 100 metre contour lines.

So my 30+ year old map number 24 - Lechtaler Alpen - will also be replaced on Monday if I get the chance. Unfortunately these new maps come with weighty booklets that I'm loathe to discard, so the heavy map bag will get even heavier. It seems weird that we are still on the same map that we used when setting off from Verona over three weeks ago - trusty old 121, but today's purchase has effectively seen that off.

We've enjoyed our break in Sölden, but will be happy to move on tomorrow. It's a pleasant place with vast opportunities for days out of all sorts, but it does have the air of a winter resort that just ticks over in the summer. Apparently, of the 90,000 or so bed nights sold to tourists each year here, some 80% are in the winter season, when this quiet, relaxed guest house no doubt vibrates with energetic skiers eager for the pistes.

And we never did get around to using the sauna!

Gibson - welcome home, if you have had as much rain as Manchester appears to have had, your hedge cutting could take a while! We dread to think what our lawn looks like.

"after so much fuel from [...] breakfast - we felt obliged to take some exercise"

I really ought to start working on that principle. We've been home for two weeks yet I'm still eating like I'm walking on the PCT. Maybe the sunny weather that has materialised with entice me out for a bit of fresh air.

The weather's been glorious in Timperley today, no rain and lots of warm sun - ideal grass growing conditions I'm afraid.
Tomorrow will be dedicated to hedge cutting, weeding and grass-cutting. What fun.

Good to see you're enjoying yourselves. I suppose this means you won't be walking with us on Monday then.

Keep up the good works!