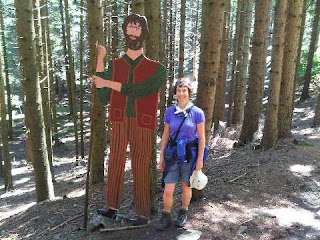 Once, there lived an emperor who kept a very strong giant at his court. He was sure that there was no stronger giant in the whole world. When his daughter reached the age to marry, the emperor called out to his empire that the bravest men should challenge his giant to a duel. The man who was able to defeat him would take his daughter as his wife.

Many courageous men accepted the challenge but nobody was able to defeat the giant and they went away in disgrace.

The emperor's daughter would have to wait a long time for her husband.

Finally, another giant from the edge of the empire, named Titch, (the giant, not the empire, and he kindly posed with Sue yesterday) got in touch with the emperor. He loved adventures and looked forward to fighting the emperor's undefeated giant. When the emperor started the duel, Titch took his opponent's right hand with lightning speed and squeezed it so hard that the blood squirted out of his finger nails. It was bright red. The emperor's giant writhed in pain and roared terribly, but Titch pressed even harder. So the emperor's giant shouted "Let me go, let me go; you're the winner!"

So Titch was able to win against the emperor's strong giant with weak fingers.

But Titch did not want to have anything to do with the marriage of the princess. "Give your daughter to whoever you want, she's already too old to bear children because of your stupid delays, and I already have a wife" he told the emperor.

So the emperor sent Titch back to Bolzano from where he organised a coup when the emperor died and his childless daughter became a nun. It had really bugged Titch that he had won the duel so quickly, after which he had whinged: "if only the emperor had a stronger giant, the fight was much too easy!"

So Titch installed his own giant son, who he had named Arnold, as emperor. Then he went back to Bolzano to live happily ever after in a beautiful woodland glade.

Sent using BlackBerry® from Orange
Posted by Phreerunner at 19:01