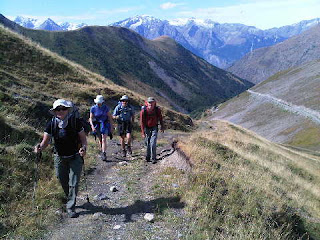 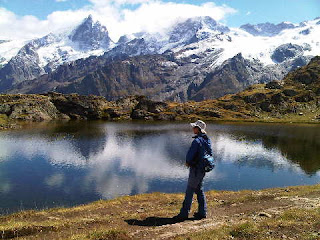 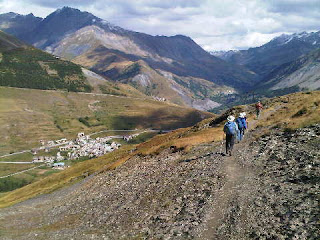 Agnes and Manu, aided by six year old Maritsa, provided all we needed for a good breakfast at the Auberge du Savel, and we left their cosy establishment at 9am for the 100 metre descent to the Ferrand Torrent and its communal watermill.

A well graded path then led to the touristy village of Besse-en-Oisans, where lunch ingredients were purchased and sun tan lotions were applied.

Sadly, as it was the day's only opportunity, a consensus that it was 'too early!!' meant that we failed to linger for an early elevenses. Perhaps yesterday's rip-off experience at the Refuge du Col de Sarenne has put everyone off. I hope not.

Anyway, we were soon enjoying the effortless ascent of a perfectly graded path up to the 1902 metre Col Nazié. Susan, Roy and I had to wait there for ages as Sue and Ken had been distracted by such sights as Yellow Mountain Saxifrage, Field Gentians, Knapweed, Eyebright and Alpine Toadflax, all new to Ken.

We reassembled for the ongoing ascent (pictured - top).

Eventually Col Bichet, with its large wooden cross, was reached. Snow covered vistas glittered in every direction, with the 3465 metre peak of Roche de la Muzelle prominent to the south.

A cool northerly wind suddenly assaulted us as we emerged onto the grassland of the Plateau d'Emparis. We moved on quickly down to a stream at 2160 metres, where we decided to add a 'lake loop' to our itinerary.

Thus we left GR54 and set off towards Lac Noir, soon pausing for a leisurely lunch with fine views in the shelter of some large rocks.

Lac Noir is a superb viewpoint; Lac Lérié, a bit further on, is even better - with brilliant views (pictured - middle) across the deep cut of the Romanche valley to the lofty heights of La Meije (3982 metres) and a splendid array of other peaks and glaciers.

There were quite a few day walkers around Lac Lérié. It was good to see them taking advantage of the sunny afternoon. One family had brought their small pet cat along. We left them searching for it in some marmot holes under a rock.

Sunlit Le Chazelet soon came into view (pictured, bottom left of the lower image) and after an easy descent we reached our gite, Chez Baptiste, at the very respectable time of 4.10pm.

Beers on the terrace followed, as we took turns under the hot shower, until spots of rain from a different sort of shower - not to mention the cool northerly - finally drove us indoors.

Alan R and others - thanks for your comments. We hope the expensive hot drink episode was just a minor blip. At least they were Large Hot Drinks!

Next Day
Previous Day
Back to Index
Posted by Phreerunner at 19:52

Have a great trip - I look forward to being jealous of your photos! I'm off to North Wales this wkd for a girls walking wkd - can't wait! Lyn x