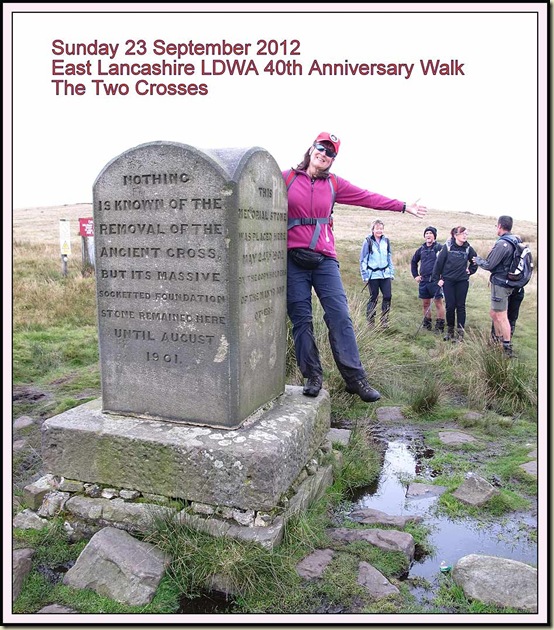 I originally joined the Long Distance Walkers Association (LDWA) in the 1980s when there were around 2000 members.  I rejoined last year, when membership had risen to over 7000.  Regular readers will know that I’ve subsequently enjoyed outings with the South Manchester and East Lancashire LDWA groups – principally with the more active latter group, in particular its ‘Plodder’ faction.

This weekend the Association celebrated its fortieth anniversary with walks all over the country, so I was pleased to join the East Lancs Group for a stroll around the Two Crosses circuit.  The group organises an annual Challenge Walk over this route, involving lots of people and numerous checkpoints.  I took part in the shorter 18 mile version earlier this year (see here).

A rather disappointing turnout of nine walkers and a dog called Buzz set off from Tottington Library shortly after 8.30am. Dave was soon leading the way in archetypal LDWA fashion, head down at a fast pace in his ancient glued up trainers.  The rest of us followed in hot pursuit past a mosaic cow on what may be the last day of the year on which Ken and Chris would be wearing shorts.

Bogs were soon encountered and were a feature of the day, with Dave zooming through them and the rest of us following in his wake, soon learning to choose our own drier routes rather than join him in the Wet Foot Society.

Shortly before we arrived at Affetside, Barbara leapt out in front of us, offering a rather poor excuse for her lateness, but at least boosting the turnout into double figures.  The LDWA’s age profile has increased steadily over its forty years’ existence, so perhaps the membership felt 25 miles was a bit far, or perhaps they had done the Two Crosses walk too many times already!  Having said that, today’s ‘elder statesman’ was the one who was consistently making the pace…

Can you spot the cross at Affetside, the first of the 'Two Crosses', on the right of the picture below?  Here's our select group - Jake, Chris, Sue, Buzz, Gillian, Dave, Cathy, Ken, Peter, and Barbara. 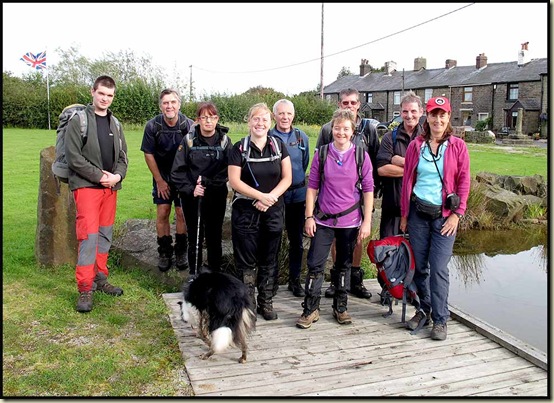 Soon afterwards we were zooming through Jumbles Country Park, beside Jumbles Reservoir on an overcast late summer's day, with the dark green foliage waiting patiently for the first autumn frosts and winds.  Luckily the impending monsoon – the most intense September storm in the UK for over thirty years – didn’t arrive until just after we finished the walk.  As I write, 72 hours later, the rain has just stopped in Manchester!

After a while we encountered the bogs and marshes of Longworth Moor.  Dave strode through them, pausing occasionally to wait for the rest of us as we picked our way through the dry bits.

An empty house, in the middle of nowhere near Old Man's Hill, had apparently recently been emptied of all contents of value before being abandoned by its owners and no doubt left to optimistic lenders to fight over its future.

Lunch was taken on a convenient couple of benches on the Witton Weavers Way path between Darwen Moor and Turton Moor.

Between the benches, a rather poorly hidden geocache in a plastic box held some modern artifacts, and a stone plaque mysteriously engraved "JPS LEFT MA??? 1894 ____ 1923" could perhaps be a relic from the area's recent industrial past, but I couldn’t find any reference to it in this wordy treatise.

Barbara made a short speech whilst we celebrated the 40th Anniversary with tea, brownies and jelly babies. 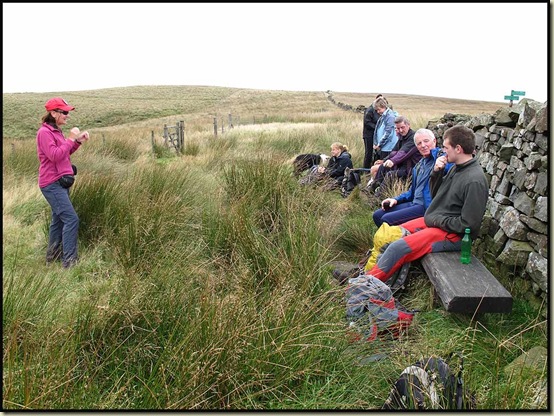 Cathy then tried to end her days in a ditch, but Jake and Ken managed to drag her out (see slideshow for picture).  Ken had already taken a dramatic tumble when he fell off the path, and several others had also succumbed to the force of gravity in a variety of mishaps.  I’ve already noted the aging profile of LDWA members; that was clearly in evidence today, albeit we only had one walking stick between us.

In true LDWA (Irregulars excepted) style, we strode past the Strawbury Duck and its ghostly residents (nobody else looked back). 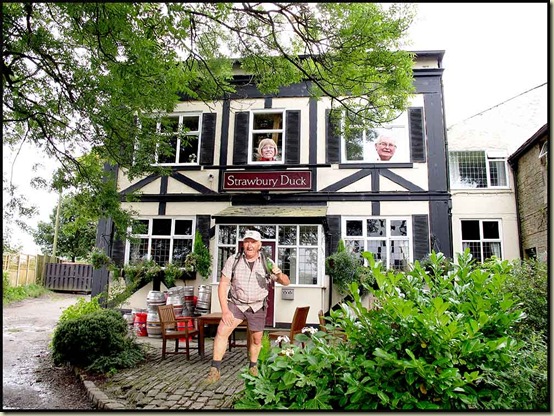 We continued to trail in Dave's wake on the ascent to Edgworth Moor, with Winter Hill clearly in view beyond one of the many reservoirs around here.

Bull Hill, a HuMP, could have been the high point of this walk, but the LDWA isn't a 'bagging' group, so we skirted around the hill, which was possibly just as well as a convention of trail bikes was being held on the summit.

Eventually we reached the second cross, The Pilgrims' Cross on Holcombe Moor (see the top of this posting).  Even Dave stopped to admire it, but I don’t think anyone else spotted the ghostly apparition on its top.

Peel Tower soon came fully into view, before our final descent of the day. 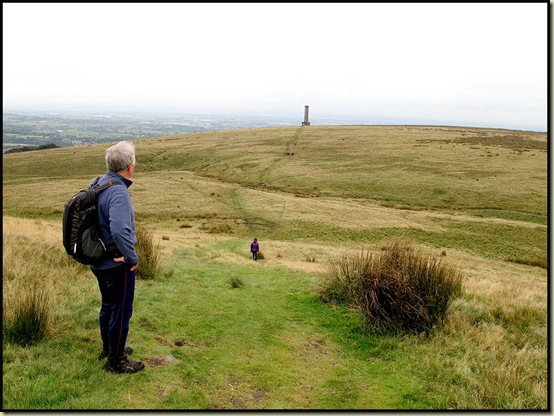 We headed quickly towards a rival group, but not even Dave could catch them, though he did briefly overhaul the lady in jeans who was just ahead of us at this point.  It must have been scary for her!

"Time for another break" announced Jake, just as the jeans lady had been caught. That meant more brownies and jelly babies in the shelter of the tower.  There was a moderately keen wind up on Holcombe Moor today.

Dave was soon dashing off again. He had very soggy feet by now. 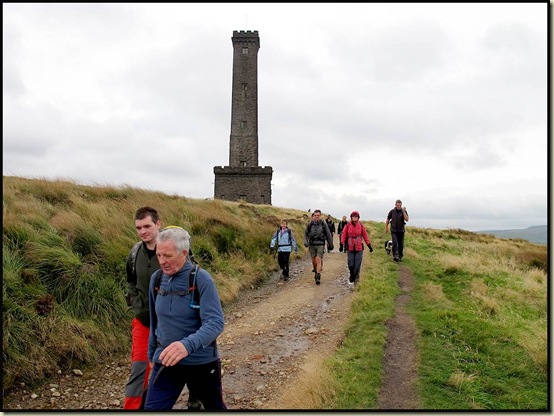 The golden turrets below Peel Tower, in Ramsbottom, house a Muslim education centre from where delegates are apparently often seen around the tower, but not today.

It’s not far back to Tottington from here, and after a peculiar diversion through an overgrown field we rejoined the ‘proper’ route near where the last checkpoint is situated on the Challenge walk.  Thankfully there was no maniacal barber masquerading as a Master Plumber to deflect our attempt to finish the walk before the rain, which we could see for the last hour or so, reached us.  So the final section was achieved at a good amble, past a pig called Pepper, bringing to an end at 5.30pm this excellent day out in fine company.

I just wish I’d taken a photo of of Dave washing his feet in a bowl of hot water (from a flask brought specifically for that purpose) after finishing the walk.

Here's an approximation of the 25 mile (40 km) route with about 1000 metres ascent - taking 9 hours including an hour's breaks. 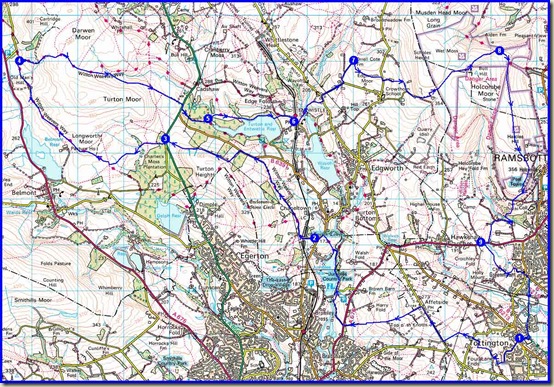 Nice slideshow Martin. A few tired faces on the latter photo’s. As you would expect after 25 miles. Glad it wasn’t raining for you all.

Thanks Alan. Nobody admitted to being tired as despite Dave's attempts to speed us up we went at a fairly leisurely pace. Dave's feet did benefit from a wash in bowl of hot water though - he had a brilliant system that anyone who wears leaky shoes or boots for their walks would be well advised to follow!

Are you going to share the system detail? Or is it just the flask of hot water.

Ah, the 'system': Pack in your car boot a washing up bowl, towel, soap, 2 litre flask of hot water, spare socks and shoes, folding stool (optional). Utilise said items in a random manner on return to car, taking care to avoid burning your feet. [An umbrella could also be useful if its raining.]

Personally I'll be sticking with the 'dry foot' system involving waterproof boots or socks. It works for me!