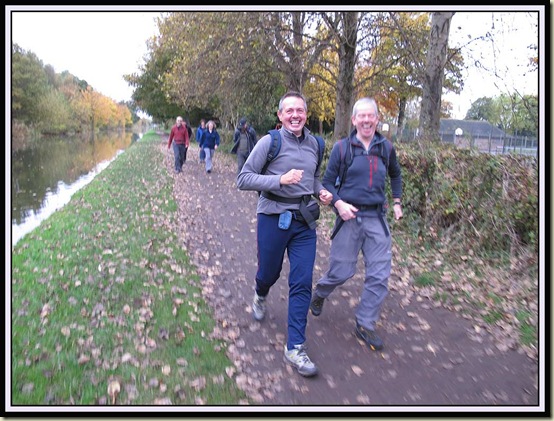 We’ve been on Curry Walks before.  A couple of times in my case.  The reports, including route and other details, are here.  JJ has been on many more such walks.  He’s a Professional.

Alan arrived first, after receiving invites from both me and JJ.  The carrot had been dangled, and he was selected to test my first attempt at a cake (carrot, of course) for some time. 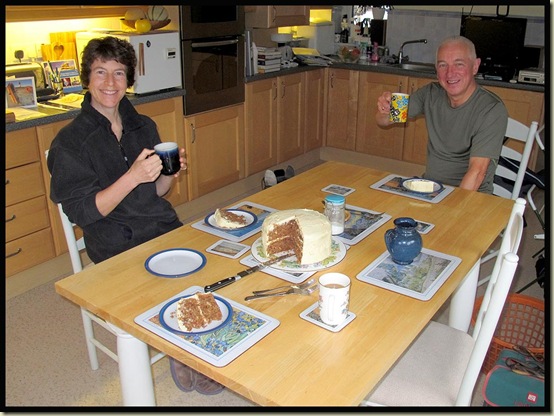 It was quite a large cake.

JJ and Viv soon arrived, then Mick turned up on the train from Litchfield.  The walk had been Gayle’s idea, but the fact had escaped her mind, so she was left to work in the Midlands.  She came for tea though!

No sooner had we left the house than we bumped into Rick and Pete.

“That’s a fine idea” – JJ led the chorus before setting off at a trot with Mick (see above).

Sue was soon lagging behind, out of breath. 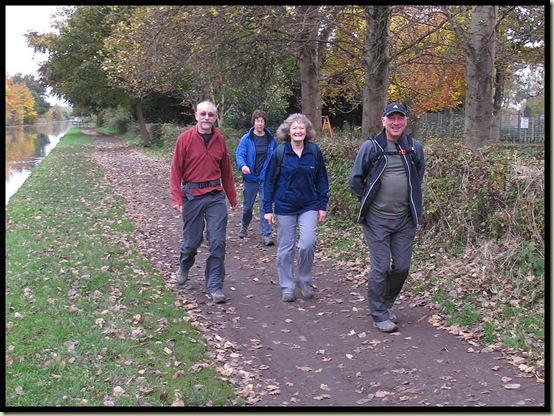 The Sustrans improved towpath of the Bridgewater Canal in Sale is a pleasant place, even on a dull and overcast autumn day like this one. 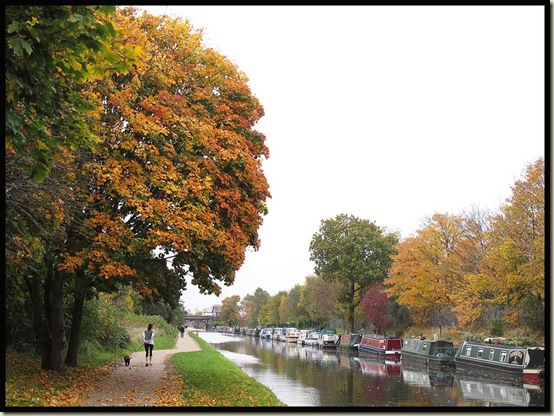 Striding seemed to be the order of the day – certain members of today’s team may be catching bad habits from their LDWA friends (not the Plodders, of course!).

I suppose it was too early to stop for a pint, though I know how many readers would respond to that comment. 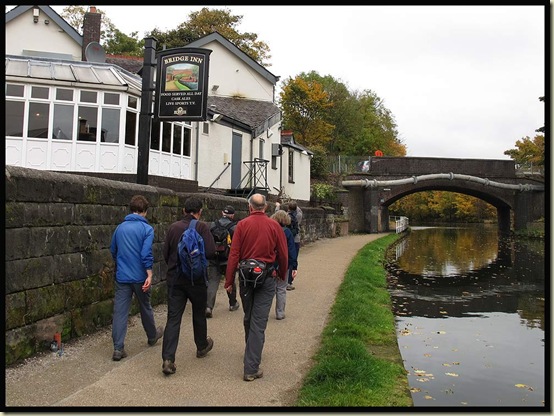 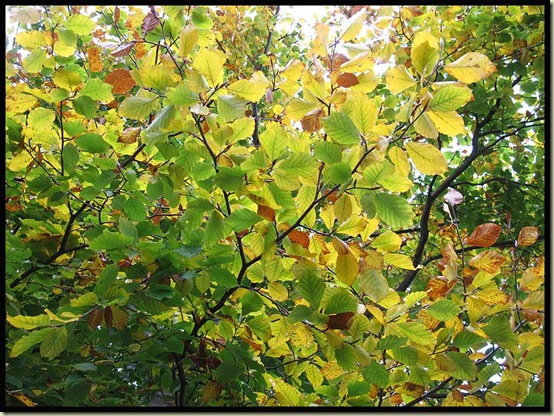 After passing through a shrubbery, over the River Mersey, under the M60 motorway, and alongside the Theatre of Dreams, we crossed to the other side of the canal near where a branch of the Metrolink system heads off to Salford and Eccles. 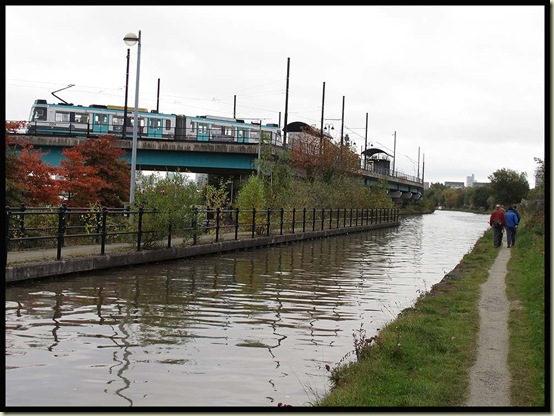 “That’s one of Brindley’s Circular Weirs”  - someone observed - “it’s an overflow weir that takes excess water from the canal and drains it into the River Medlock (in a tunnel).”

This weir and it's companion at Potato Wharf were apparently the first of Brindley’s Circular Weirs, predating those found on the Staffordshire and Worcestershire Canal.  It needed a clean! 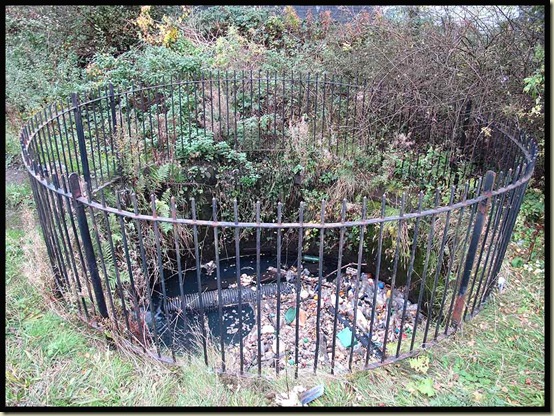 We soon reached Castlefield Junction, where the futuristic Merchant’s Footbridge guided us in to our objective, with JJ rather lagging behind at this point.  The pace had got to him?! 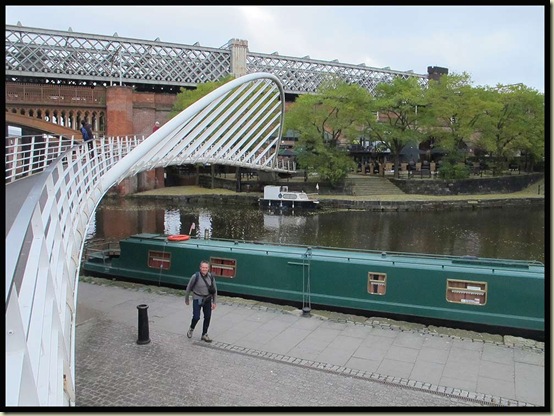 Here the Beetham Tower comes into full view, and the duck house pictured on earlier visits seems to have been moved. 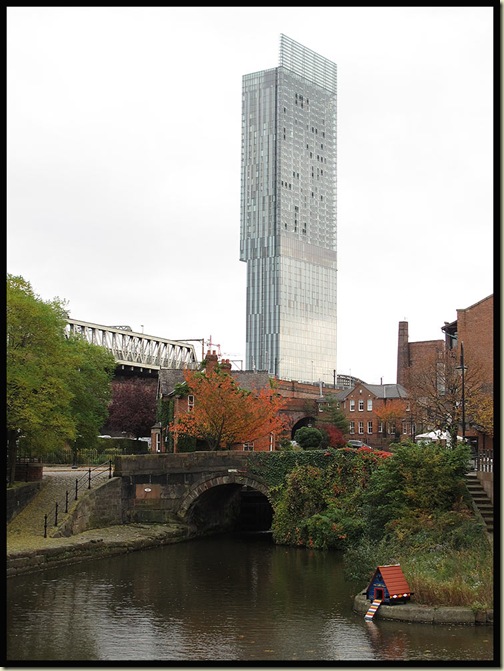 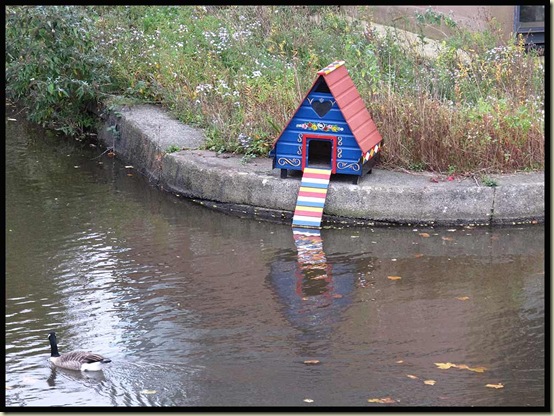 The canal reaches an area that is unrecognisable from a few years ago, with many derelict buildings having been restored. 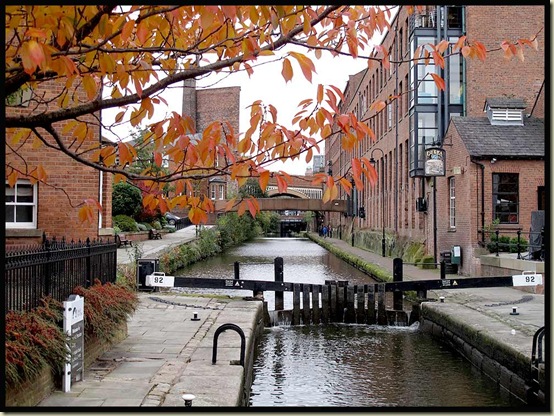 Eventually, as Oxford Road and Whitworth Street are reached, more modern tall buildings crowd in on the towpath. 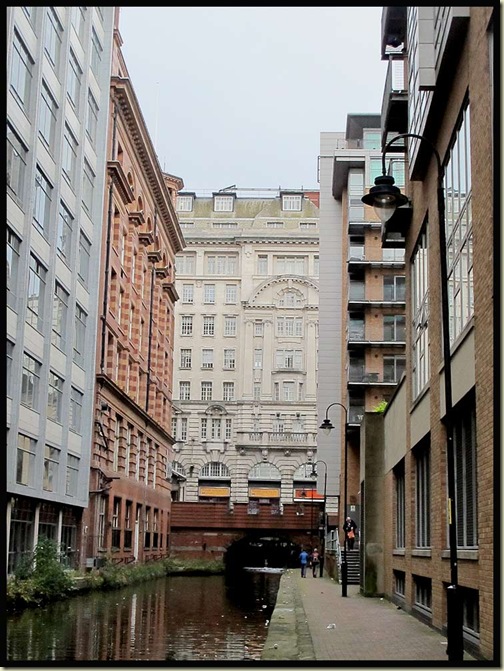 We decided to leave the canal on reaching the Gay Village, as its route to Piccadilly is a little unsavoury at times (see previous postings).  There’s always some party or other going on in the Gay Village – a very jolly place. 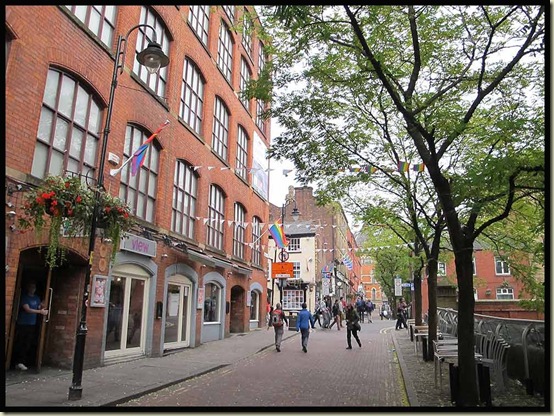 City streets then led inexorably to This & That, in about two and a half hours from Timperley.  The standard fare here is ‘rice and three curries’ – currently £4.40 – and very good it is too. 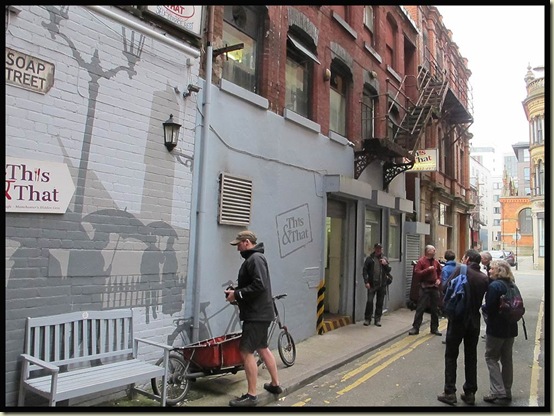 Sue had eaten most of hers before I took this photo. 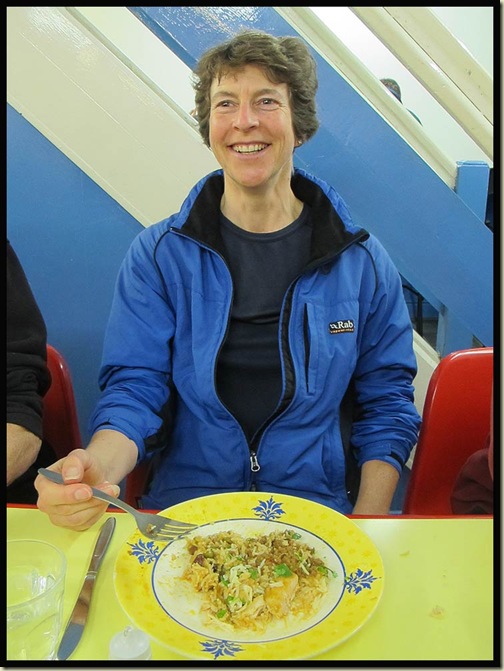 Alan then stormed off, with the rest off us hot on his heels, to one of his favourite Holt’s establishments, the Ape & Apple, for an alcoholic afternoon whilst he waited for Sheila to finish work.  His beer stained report on the walk is here.  The rest of us joined him for a while before embarking on a variety of tasks (eg Sue and I bought a new television) and reconvening later in Hazel Grove for Mick and Gayle’s excellent slideshow relating their adventures on the Pacific Crest Trail earlier in the year.  There’s no ‘label’ on their reports, but if you start reading here, then move to here and here, and even more recent postings, you could spend an entertaining hour or two…

PS JJ’s report is here – very good it is too.

Reading JJ's report, I realise I left quite a bit out, but I did put a bit more in! Apologies to Roy - I forgot that he had joined us for lunch. Nice photos, JJ, I'm sure we could produce a different set for each trip on this walk.

I did go and buy a pair of wellies. Just to put the record straight that i didn't spend all afternoon in the pub. Or did i? I can't remember. ha.

A good time was had by all anyway.

A very pleasant day out, indeed. I managed to get cake in the morning and in the evening; and Louise, you are correct: it was very yummy.

That's a great picture of the Beetham Tower and the duck house: the ridiculous to the even more ridiculous, or maybe the other way round?