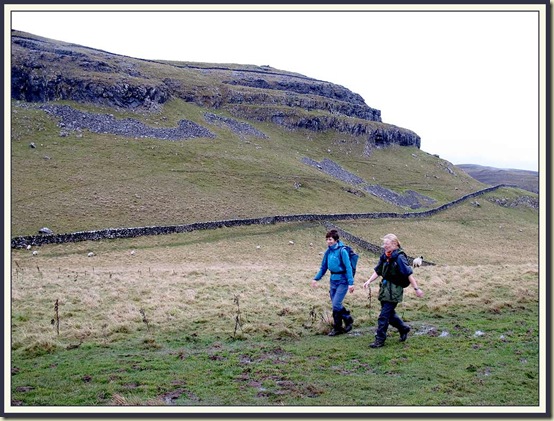 Sue has had the last two Tuesdays off work.  So she has joined me for a walk on both those days.  The first walk, with Tom in the Lake District, was notably wet.  We thought the same would happen today, as we fought our way through the busy traffic to Long Preston to meet up with TGO Challenger Heather T-S for an outing.  But luckily, by the time we had enjoyed a pot of coffee and a chat with Heather and had eased our feet into our boots, the rain was much diminished, leaving us with a largely dry stroll to Settle for lunch in the Talbot Arms, which had been carefully chosen as a luncheon venue in view of the dire weather forecast and the fact that I’d omitted to pack my ‘lunch tent’.

“You can eat those” Heather assured us, pointing to a variety of Waxcap mushrooms that littered our surroundings.  She’d told me this before. 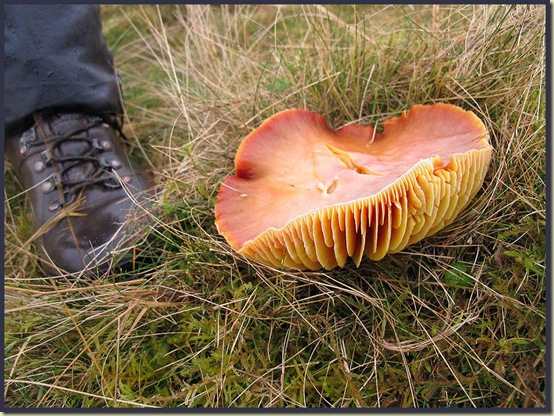 So we collected a few of the Crimson variety and, not put off by their slimy caps, we later fried them in butter and garlic as a starter – and excellent they were too.

The route chosen by Heather involved fording the normally demure waterway known imaginatively as Long Preston Beck.  The girls splashed through whilst I hopped across the stones.  Sue wears unzipped gaiters, so she got wet feet.  I think the gaiters must be used to keep her trousers clean rather than her feet dry! 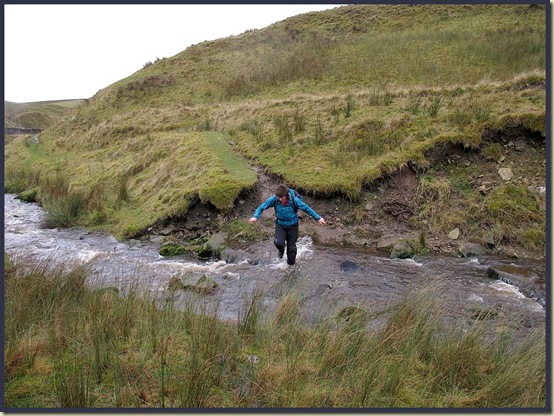 Soon we emerged onto Langber Lane, which we followed for a few minutes before heading off into Attermire. 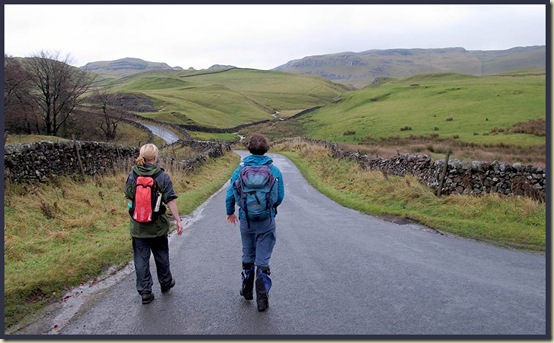 Attermire, also pictured above, is a picturesque area full of little peaks and a variety of caves, on the well trodden path between Settle and Malham. 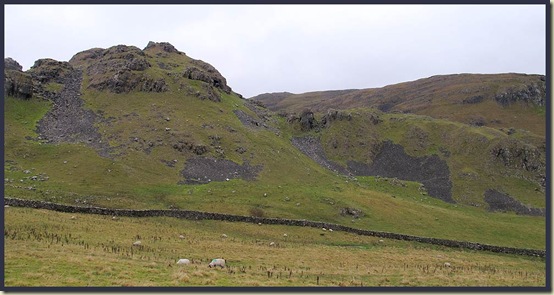 This is one such ‘cave’ – in this case just a small hole which could just about be used to shelter from a storm. 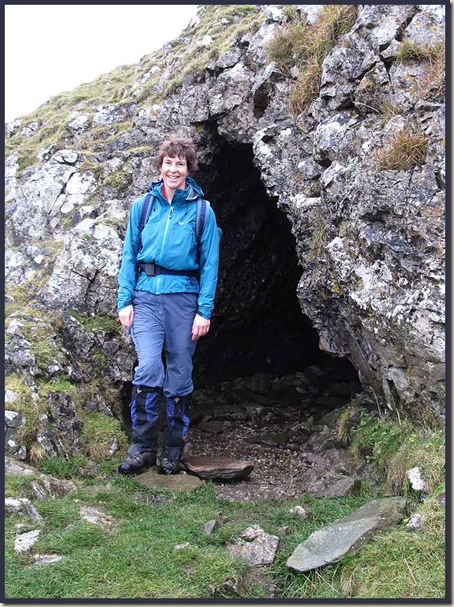 A grassy path leads down from Attermire to the town of Settle. 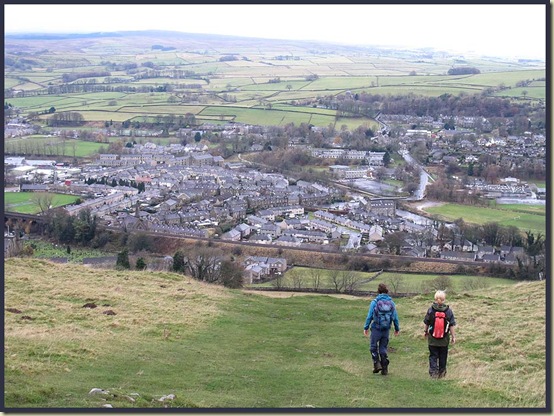 We could see rain approaching quickly from the west, so we hastened past Castlebergh Crag to find a stream in which to douse our muddy boots before dirtying the pristine carpets of the Talbot Arms.

But we did pause for long enough to note from an information board that “this limestone crag has been recognised as a beauty spot ‘for centuries’ – ever since the start of tourism of Britain’s natural wonders.

The first visitors, in the mid 1700s, wrote that the rock had been laid out as a giant sundial, but by 1800 the sundial was long gone and instead the people of Settle had laid out a path to the summit of the crag so that visitors and townsfolk alike could enjoy the view.

Over the next 100 years the area was gradually developed by way of a network of paths, the planting of trees and shrubs, and recreational aids such as swings and a roller skating rink.

The railway brought visitors in unprecedented numbers, and Castlebergh became a popular picnic spot.  There was a small charge for entry, and hot water for tea making could be obtained from the gatekeeper (just like a modern day mountain hut!).

Settle Town Council now own the site, to which access is free.

Whilst the crag might have been assumed to be ideal for climbing, there was no recorded climbing history here prior to 2009. A lone relic of a rusty piton halfway up the central corner is perhaps the result of an aid climbing attempt probably back in the 1960s. Others may have tried but the state of the rock would have deterred them, and climbers may have just assumed that being so close to the town centre climbing would not be permitted.

Early in 2009 a rock-fall caused by invasive tree roots on one of the lower buttresses was the catalyst which forced the Town Council to act and close the area to the public.  Subsequently there was a unique collaboration between the Town Council and a group of eight local climbers who, in conjunction with the council and supported by several local traders transformed the cliff into an excellent climbing venue.”

Nigel Baker, who is responsible for the following image, was one of those climbers – I hope he doesn’t mind me using his image in which the numerous different routes are displayed. 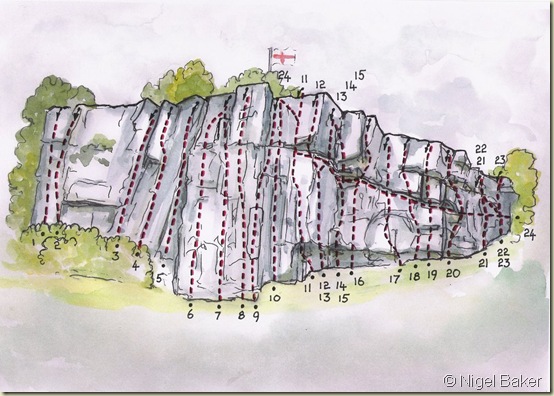 You can find out more about Castlebergh Crag here, but if you follow our lead you’ll just make it to the pub before you receive a drenching.

The pub lunch was a good move, as the rain was easing again by the time we left, to take the short route back to Long Preston via the heady 315 metre viewpoint of Hunter Bark, and the unsurfaced track that is Edge Lane.  Pausing to spy a flurry of witches on Pendle Hill, Sue enjoyed a cuppa whilst Heather gathered a bag full of rubbish left by some errant picnickers who had clearly strayed beyond their normal comfort zone. 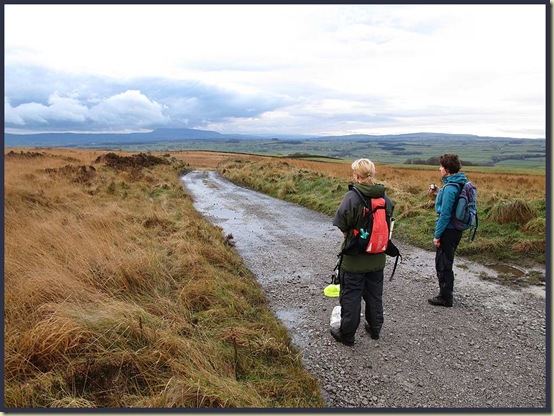 It was good to see Heather, and we hope to enjoy more ‘escapes to the country’ with her over coming months.  Today’s route more or less repeats earlier ones, but for the record it’s shown below -approximately 17km (11 miles) with about 500m ascent, in 4.5 hours (including stops). 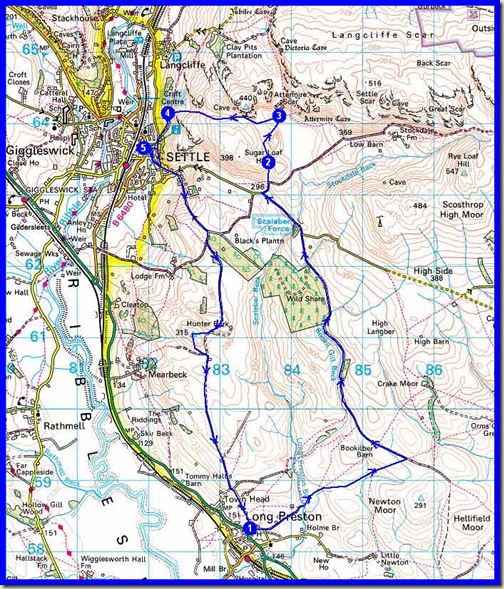 Sounds like fun! I see Sue is wearing a small pack, has there been some improvement in this department? I hope so.
(There's a rather annoying ad for iPad, involving a flip flop and a cockroach, partly obscuring the already tricky 'Prove you're not a robot'. I'm finding them all over, is it me?)

Oh dear Louise. I'm not getting an advert when I try commenting on other blogs - that must be really annoying. I'm afraid the robot protection is necessary though...

Yes, Sue is wearing a small rucksack and managing ok. I'm not sure whether she'll ever get back to backpacking with a tent, but hopefully she will make sufficient progress to be able to carry her own gear on B&B/hutting trips.

Oh I don't mind the robot thing, you get ridiculous amounts of spam without it, but it's hard enough without being unable to see it all! I'm going to have investigate these ads though.
Glad to hear there has been some improvement, even a small rucksack can make a difference.

Nice-looking circuit; shame about the views!

Glad to hear Sue is toting a daypack once more, and looking to step up to overnighters by hostel or B&B. Missy G has reached much the same point, and we are hoping that after Christmas we can step up to 2-day B&B trips, then, by spring/summer, a week's accommodated LDP. Getting the confidence back is a lengthy process, but there's no rush.

The views were actually ok, Jules - it must be my snapshots that are a little wanting. Sue can actually do overnights - she did the TGO Challenge then 2 months in the Alps this summer, but it'll be nice (for me) if she can carry a bit more of her own gear next year!

I probably ought to engage my brain before typing anything! Wrong on both counts - views and health matters. And it's not as though I didn't know or have the evidence.

I'll put it down to work-related stress. Which reminds me, I've got a manager I need to castigate ...

"work-related stress" - as some of us 'plod' into old age, at least that's a thing of the past. I don't miss it! Actually the views weren't fantastic, but at least the cloud wasn't 'down'!