The plan was to meet at The Old Grapes, off Deansgate, for a walk through the Irwell Valley in Salford as far as Heaton Park – about 10 km (6 miles) in total.

It was a pretty dismal evening.  Meteorologically speaking.

Nobody turned up.  That was no great surprise, but I’d wanted some exercise and enjoyed a beer before leaving what used to be a ‘local’ to my old workplace in Manchester.

The rain eased as I strolled down Deansgate, thereby dissuading me from the temptation to bale out at Deansgate’s Metrolink station!

I was soon in the familiar surroundings of the Merchant’s Footbridge (above) and lock 92.

Ambient light in Manchester means that there is no need to carry a torch on such walks, though the silence of the towpath can be a bit eerie at times.  Today the silence was broken for a while by a noisy funfare next to the canal in Old Trafford.  It was well fenced off, with no canal access, so I heard lots but saw nobody as they were high above me.

I was glad the huge posters attached to the football stadium, glorifying a Scottish pensioner, were distant enough to be merely amusing and not too threatening, though they were by far the scariest encounter of the walk.

It has been a bit wet and windy of late, as reflected by the inner city debris. 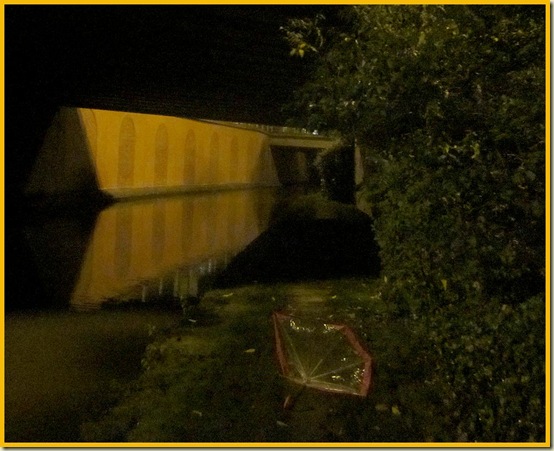 As the canal approaches Stretford, there are great night time reflections from the buildings on its banks.  It’s a shame that the standard of my photography at such times is so poor.  This is just a cheap postcard though… 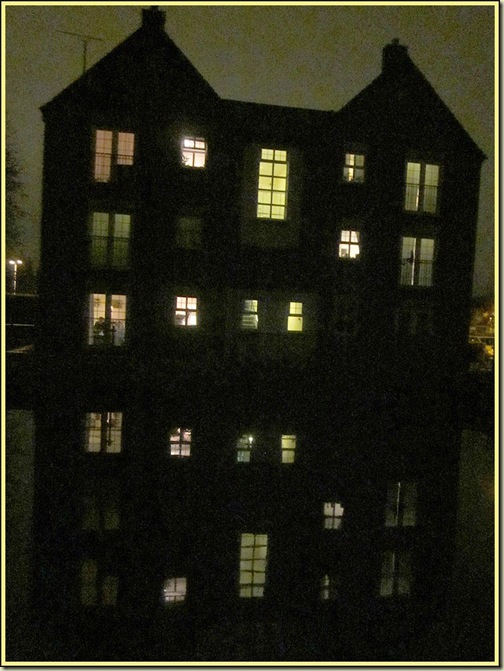 Heavy drops of rain as I approached Stretford signaled my abandonment of this short excursion, in favour of tram power for the rest of my short journey back to Timperley.

I got my exercise though – a pleasant 7.5 km in an hour and a quarter – much better than slumping in front of our 12 inch TV!*

* Borrowed from Mike as ours went ‘pop’ – with almost perfect timing, the day after we ordered a new one.

Pretty poor photos actually JJ. But I suppose they just about capture the ambience of the night! The curry was at home before setting off. Beer was at the Old Grapes. I couldn't spot you in the crowds!

Scottish pensioner ha ha cheeky sod, leave SAF alone! You are braver than me walking along the canal that time of night! I once cycled the canal on my way home in the dark but found the Canada Geese were lying on it every few hundred metres!

Tricky customers those Geese,Jamie, but I bet you were glad they weren't swans - there were plenty of them the other night, still not as scary as those giant posters though!