Wednesday 23 January 2013 – A Plod from Scorton, to Dolphinholme and Nicky Nook 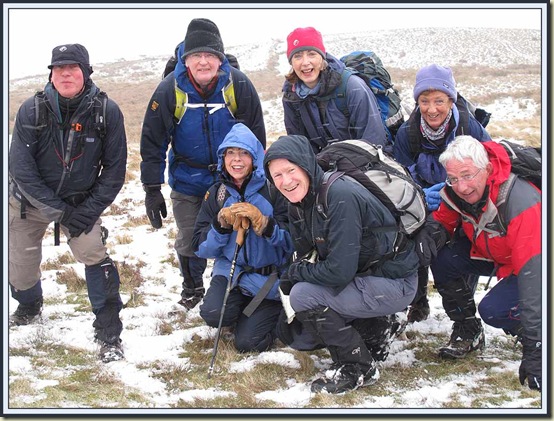 In the temporary absence of Reg, who normally organises these ‘Plodder’ walks, I had recently plotted four ‘Here and There’ walks to take place on alternate Wednesdays.  Details are included here.  Anyone is welcome to come along, whether or not they belong to the Long Distance Walkers Association, whence the ‘Plodders’ originate.

The rest of the ‘Magnificent Seven and Maude’ who attended this first walk in the series were aware that the routes haven’t been reconnoitred, so the paths we took were as new to me as to anyone else.  Indeed, most knew the area better than me.  Anyway, subject to a few minor mistakes (my map was thirty years old), and with the assistance of Alan R and a selection of randomly appointed guest navigators, we managed to find our way round this delightful circuit.

We were expecting snow, so it was a relief to find that it hadn’t barricaded the car park at Scorton Picnic Site.  In fact there was none at all just there.  However, this meant that after a week or two of walking on firm snow-covered ground we now became engulfed in mud as we plodded towards Shireshead on a very overcast day.  At least it wasn’t raining though.  My waterproofs haven’t been used this year.  Yet!

Health and Safety madness on the approach to Dolphinholme had us worrying unnecessarily about a ‘Closed Path’ ahead.  There had been a minor landslip that was easily negotiated.  Enough said.

After passing a pretty cottage, Coreless Mill was reached – clearly a well conducted restoration project with the waterwheel standing pristine in an enclosure in the garden.  Wyreside Hall, partly remodeled in 1790 by Parliamentarian John Fenton Cawthorne (1753-1831) before he was expelled for embezzlement, stands a little way to the east of the mill.  Its latest incarnation is apparently as a country house hotel, to which it currently appears to be in the process of conversion, much to the chagrin of the owner of Coreless Mill and others.  This quiet rural enclave does appear to have some ‘issues’.

The River Wyre was crossed in the pretty, but apparently publess, village of Dolphinholme, from where we slowly rose towards the snowline as we strode on along Wagon Road.

Once that line had been reached, Maude entertained us by persistently rolling in the snow in an effort to remove her coat.

A barn wall provided a sheltered, if smelly, venue for elevenses, and the first of several issues of sustenance (brownies).

A little further on, good progress was made along Waste Lane despite some more substantial drifts of the white stuff. 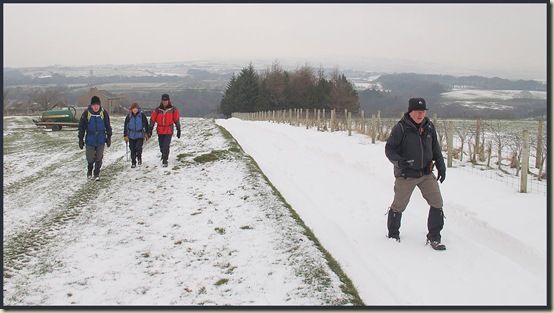 Beyond here we started to notice a series of 'Waterboard Gates', markers on field boundaries that indicate the line of a pipeline through which Manchester receives water from Thirlmere.

Continuing through mud and snow we passed a derelict cottage with an outhouse that Nancy's announced would be her next restoration project.  (The outhouse or the house, Nancy?)

After Lane Head we took to the hills, lunching on tussocky islands in the snow in a spot sheltered from the bitter breeze.

With the lofty summit of Nicky Nook now in our sights, and another fresh leader, the Magnificent Seven and Maude hastened on towards Fell End, where some Guineafowl were scrabbling in the snow.

The road to Nicky Nook was now clear ahead of us.  Maude was appointed leader and she willingly hauled Hilary up to the lofty 215 metre summit, leaving the rest of us in her wake as we puffed our way to the trig point.

It’s a fine viewpoint, especially on a clear day.  Today was dull and a tad misty, so we had to rely on our imagination as Nancy attempted to point out Blackpool Tower in the distance.

We then descended steeply into the shelter of Grize Dale, a lovely valley that leads to the outskirts of Scorton. 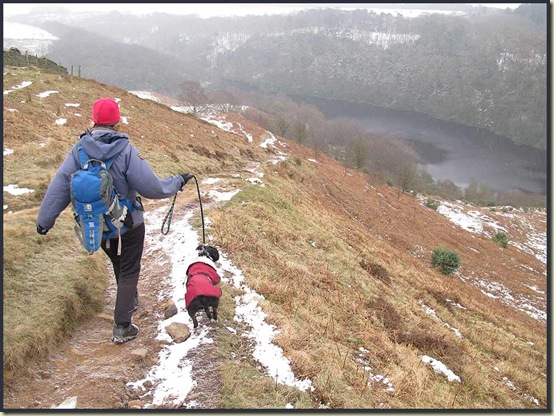 After slipping underneath the main road, and passing the church whose distinctive spire is familiar to motorists on that road, we soon found ourselves indulging in refreshments at one of Scorton’s friendly fleshpots.  “More brownies please!” 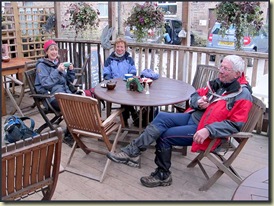 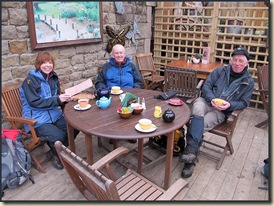 Despite Alan’s efforts to return to his car on this Ferguson TE20, we finished up on the pleasant, if slightly muddy, path to the picnic site. 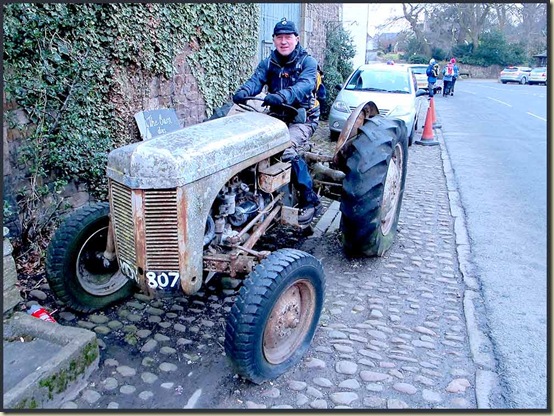 Here’s our approximate route, excluding the ‘surprise extras’ – about 20km (12.5 miles) with just 350 metres ascent.  It took us around 6 hours, but could have been walked faster than that. 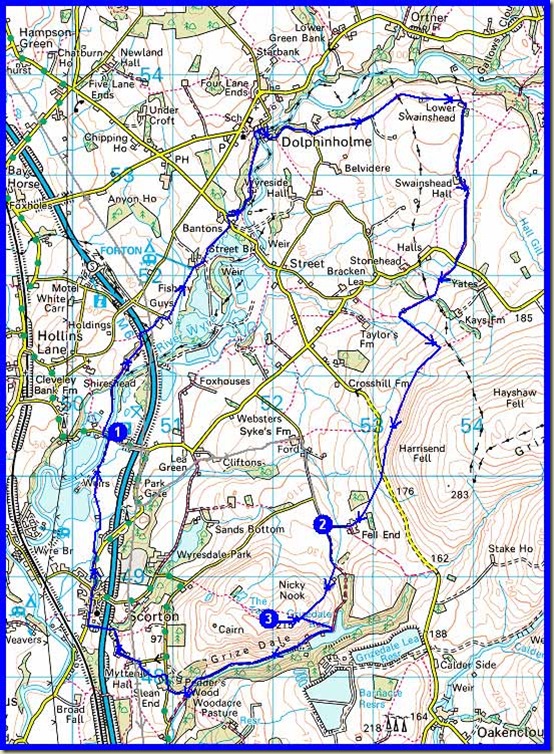 Alan has written about the walk (here) in a form that may be more understandable to his grandchildren than to some of those present.  A fine and entertaining piece of writing, Alan.  Well done!

I took more photos than are in this posting.  The light wasn’t brilliant, but should you wish to view them (and the accompanying commentary) they are here.

Finally, I should mention that Nancy is leading a walk in the same area, but on a virtually completely different route apart from Nicky Nook, on 13 March.  She will be pleased to see you.  Here’s the East Lancs LDWA programme.

The next ‘Here and There’ plod is on Wednesday 6 February - 10.30am at the small car park in Simon's Lane at SJ 518 766, for Beacon Hill and Delamere Forest, featuring the first part of the Sandstone Trail.  It would be good to see you…

Thanks for organising the walk Martin. Excellent. I approve of the lack of reconnoitering. It adds to the day.
It was no fairy tale!

Ah, the Health and Safety mob would have us all stay in bed. Alan R and his tractors eh? Lovely.

Really enjoyed the walk Martin,thank you. We had a taste of everything, except the whisky; you kept that quiet Martin,know wonder the all the guys were smiling. The Little House on The Hillside is waiting just for me!!!Planning application being considered!!
Thanks again x

Thanks everyone. Nancy, I think you must be losing the plot. I could swear it was you who glugged those last dregs of whisky! Or have I just entered Alan's fairytale?
Time for bed, said Zebedee.

"Maude entertained us by persistently rolling in the snow in an effort to remove her coat."

As I speed-read this post in my lunch break at work, I did pause at this sentence, just to double check that Maude was the dog! That wasn't the immediate picture that came to mind.

Gayle - speed reading can be quite fun sometimes can't it. A bit like rolling in the snow...
Have fun at work!