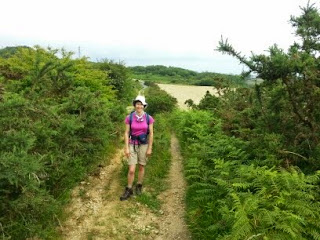 An email yesterday from Robert and Emma, owners of the Hotel du Tourmalet in the village of Bareges, brought home to us the dire straits of Bareges's residents, and some impending practical problems of our own.
Here's an extract:
Hello Martin,
I'm very sorry to have to let you know that unavoidably we will no
longer be able to accept your booking at the Hotel du Tourmalet
following the serious flooding that hit the Pyrenees last week. There
is currently no public access to Bareges, as the Tourmalet road and
many of the bridges in the upper valley have been badly damaged. The hotel itself has suffered some undermining of its foundations, and we are awaiting an expert opinion on whether it can be repaired, or if
the decision will be made to demolish. The important thing is that we are all safe and our family has been reunited, albeit in temporary accommodation.
In terms of your holiday plans, I'm not sure that you will be able
to find accommodation in Bareges, as many of the businesses there
have been affected and the majority of the population has been
evacuated...... I am also not sure whether the standard GR10 route in
the Bareges valley will be accessible, as the bridge across the river to Viey has been destroyed. ...
The state of France has declared the damage to the Bareges valley to be a Natural Catastrophe.
Once again, I am sorry that we have to bring you this bad news.
With our deepest regret
Emma
Well, our hearts go out to all in Bareges, including Robert and Emma and their family, who so far as I am aware have spent several years renovating the hotel that may now need to be demolished.
And we thought we'd had bad weather!
So far as I can see, the place we have booked in Cauterets is still taking bookings for the period we are there. This despite us being told that the town is cut off and being supplied by helicopter.
Our two nights after Cauterets - in Luz-St-Sauveur and Bareges - look blighted.  We've heard that the Spanish side has also been affected - a Spanish route being a possible option. But we have no Spanish maps or guidebooks with us.
Something of a dilemma. Suggestions as to how to resolve it, perhaps by a route through Spain from before or after Cauterets, to after Bareges, would be most welcome (by email to mobile@topwalks.com).
(Currently we will be charged a lot if we cancel our Cauterets booking.)
The photo was taken shortly after we set off from Hendaye, before the deluge.
Sent from our GR10 trip - see here for our itinerary
Posted by Phreerunner at 06:45

Hi Martin, Sue. Hope you are both OK. I have had a look at maps and it looks pretty complicated to get around from where you are to where you want to go.

Having said that, somebody with local knowledge will know better.

Worst case scenario - can you get transport further on.
If things are so bad it may be worth missing out a small section. It can always be done another time.

Thanks Alan
There are a few of us to put our heads together. Missing a few sections is an option, as is hiring a guide. Transport around the missed sections may be almost as hard as walking them...
Our accommodation in Cauterets is confirmed as ok, so we will have to go there or we lose €200!
Good news - Sue has just this minute found a Ghost Orchid - she's overwhelmed with excitement!

Sorry to hear this. You may be able to pick up maps and books at Cauterets - it's a big place. If not, why not have a few days off there and enjoy the cafe life for a while until the places further on sort themselves out?
Good luck.
:-(

We have three nights in Cauterets Alan. But it's one of the main victims of the weather. Your description is unlikely to apply. The last picture of a café in Cauterets that I saw indicated that in order to be served you would have to arrive by boat and be served from a first floor window!
It's going to take more than a few days to sort out this flood damage, from what we hear.

Just a thought - I hope Robert and Emma don't mind me quoting from their private email. I thought it might demonstrate the serious nature of the flood. It must be a really terrible time for them and the other residents of the affected area.

Interesting article about the floods on this blog-some of the comments may help with your decisions.
http://www.pedaldancer.com/2013/06/pyrenees-floods.html?utm_source=feedburner&utm_medium=feed&utm_campaign=Feed%3A+pedaldancer%2FxAGd+(Pedal+Dancer)

Sorry to hear about this problem.

When we did our hybrid HRP/GR10/GR11 crossing we crossed into Spain by way of the Breche de Roland south of Gavarnie, but given it's at over 2800m I would guess it may still be blocked with snow! However if you'd like to know more of the route then let me know and I'll dig out my Spanish maps (I seem to remember there were a couple of chained sections!) I think we stayed in Spain for well over a week after this though so it might not help you.

Thanks Alistair
I've toyed with the idea of Spain, but we found today hard enough in the snow, and we were in comparative foothills below 2000 metres.
In fact it looks as if we'll be adjusting our plans and heading north to avoid a high pass before we reach Cauterets.
Luckily, we've just had a wonderful mountain day, so all is well.

Hi Martin,
Glad to hear you're managing in the snow. Cauterets is getting better every day according to their tourist info blog: http://blog.cauterets.com
Safe travels, Nick

Just caught up with your posts [been away in wet France!]and now you have problems. When we did the GR7/10/HRP we had to go [hitch and train] to the other end at Banyul to avoid the late heavy snow above Sallent de Gallego and then walked backwards! Just an idea.Hope you can come up with something - don't be tied down to your previous planned schedule.

Thanks Nick, and 'Bowland'
It's another lovely day in Lescun. I'm hoping for no problems after Luchon, where Sue leaves for home and Graham should be joining me for a couple of weeks. I'll also have the added flexibility (and weight! ) of a tent.
We will plan our route to Cauterets today with the aid of local knowledge, and worry about Cauterets to Luchon later, especially as the situation is changing from day to day.
Thanks everyone, including Jill W, for your suggestions and offers of assistance.