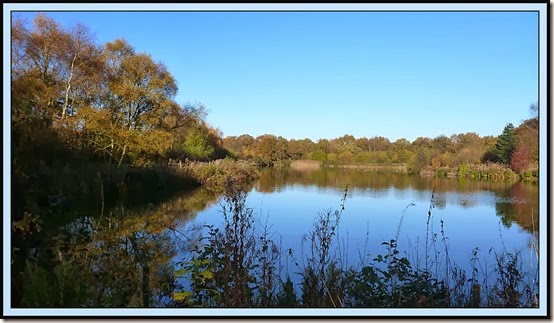 Last Tuesday evening was allocated to an 8 km walk around Lindow, in Wilmslow. It’s not far from home, so I decided to recce the route, which was planned to cover a few ‘new’ paths. The pictures in this posting are from that recce, which was more of a jog than a walk, as the 8.5 km were completed in a shade over an hour.

Black Lake, pictured above, is home to a wide range of wildlife, including water voles and great crested grebes. The plaque pictured below relates that the Common was purchased from the Countess of Stamford and Sir Humphrey de Trafford, and presented to the residents of Wilmslow in 1897. 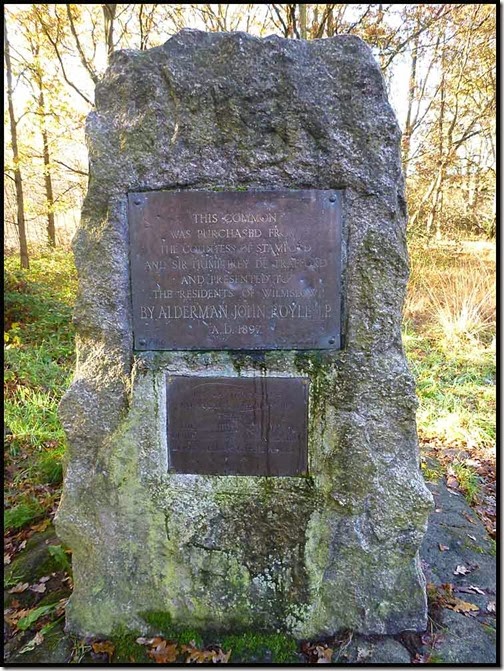 In the hard times of the war years and subsequent decades, such places received little maintenance and became overgrown and unpleasant (perhaps not for the wildlife!).

By the 1980s Wilmslow’s prosperity was evident, and Lindow Common was recognised as a potential amenity, albeit adjacent to a huge peat farm which is still present (Lindow Moss). A restoration scheme resulted in the revival of the land and it was opened as a Nature Reserve in 1988.

It’s now a very pleasant area, especially with the autumn colours on these fine November days.

After heading down Battery Lane I found myself outside the Plough & Flail, which claims to be in Mobberley. 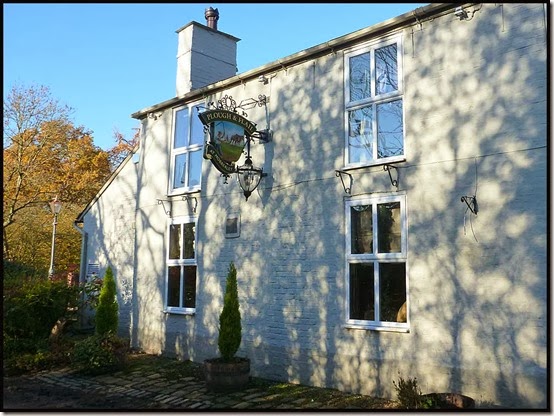 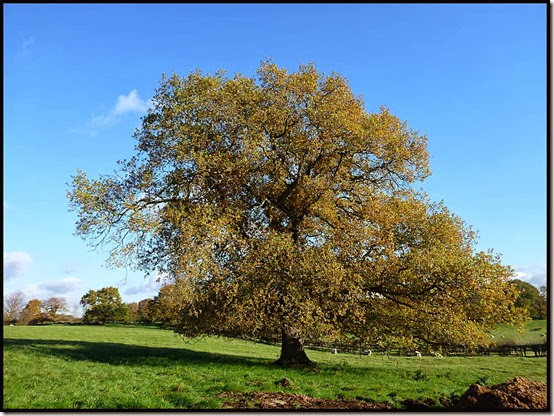 Returning to the Common, some of the trees looked wonderful in their autumn plumage.

My route is shown below – click on the link (‘View Details’) for more details.

Later on I was joined by Sue, Graham, Alistair and Andrew for the evening walk. It rapidly became clear that I’d not really been concentrating on the recce. The others noticed this when, 15 minutes after I’d so helpfully pointed out the plaque to them, we passed it again, having managed a complete lap of Black Lake.

Then we emerged from the Common and inadvertently proceeded down Newgate Lane rather than Battery Lane. This meant I would have to negotiate several boggy fields ‘in reverse’ compared with my recce. So I chickened out and fumbled my way round a more familiar, and much drier, route through the peat fields of the Moss.

It was a lovely moonlit evening, so nobody seemed to mind, though they did get a bit fed up when on re-entering the Common, I failed twice to find the car park, returning us each time to the wrong place on the perimeter of the Common.  So we gave up and took the road to the Boddington Arms, for welcome refreshments after about an hour and a half in the moonlight.

The route shown below benefits from Garmin converting my 6.8 km ‘track’ to a 5.3 km ‘route’. There must be some sort of ‘smoothing out’ software that has eliminated all the extra loops!

My next challenge will be to find my way up Shutlingsloe on Tuesday 17 December – leaving 7.30pm from Trentabank Car Park – all welcome.