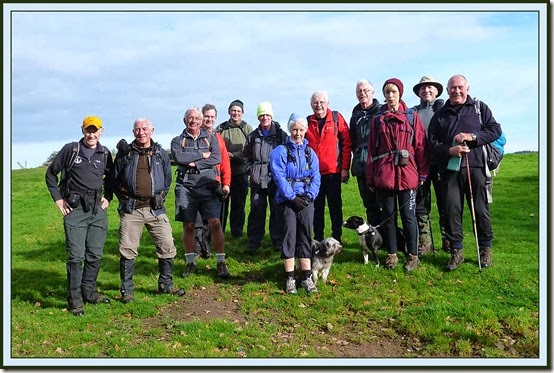 It’s some time since I went on a proper ‘Plodder’ walk, apart from that nice excursion to the Roaches with Don and Neil, having spent the time since Part 1 of the Thirlmere Way on 3 April in a variety of alternative locations or states of injury.

Having missed many of Reg’s previous ‘Fish ‘n Chip’ outings, I made sure I didn’t slip up this time. We started from Kingston Towers in Adlington at 10am prompt, with twelve stalwart plodders and a couple of dogs.

Lapsed LDWA member Alan R had been tuned in to my wavelength and turned up in search of tractors, or was it by way of therapy after some Satmap GPS software mishaps and the mess of a dysfunctional continuous ink supply system?

Anyway, Reg came up trumps when he led the obedient group out of his housing estate and more or less immediately past a David Brown 1390 2wd tractor in condition that had Alan R drooling. 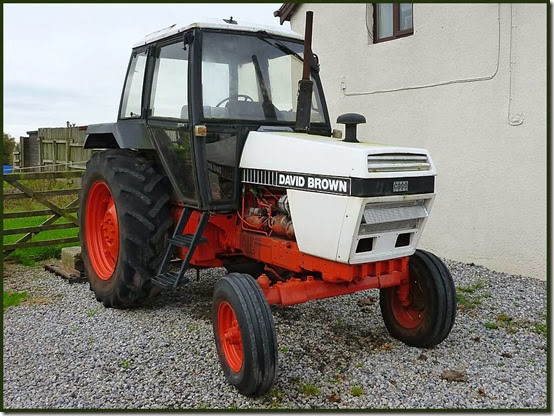 Pleasant paths and lanes led inexorably across the M61 motorway and on towards the banks of Anglezarke Reservoir, with good views to Winter Hill and Rivington Pike.

A pause for breath outside a new housing estate offered Reg the chance to explain that this was the site of Heath Charnock Isolation Hospital. 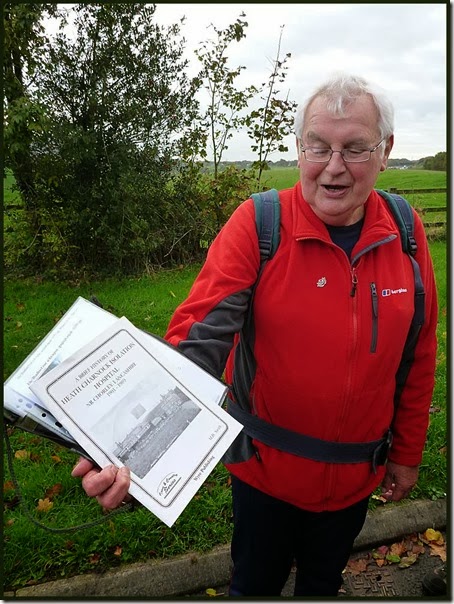 Here infectious diseases such as tuberculosis were treated between 1901 and 1982. Patients benefited from the clean air, there being no nearby motorway for most of that time.  The hospital was demolished, making way for this de-luxe housing estate with a constant hum from traffic, in the mid 1990s.

The infant River Yarrow was crossed by a narrow footbridge, beyond which we enjoyed excellent views towards Anglezarke Moor. 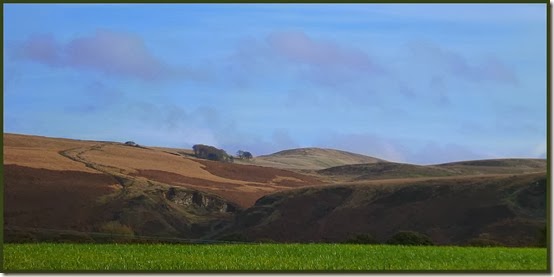 The path beside Anglezarke Reservoir is a public right of way, despite the landowner’s efforts to discourage visitors. 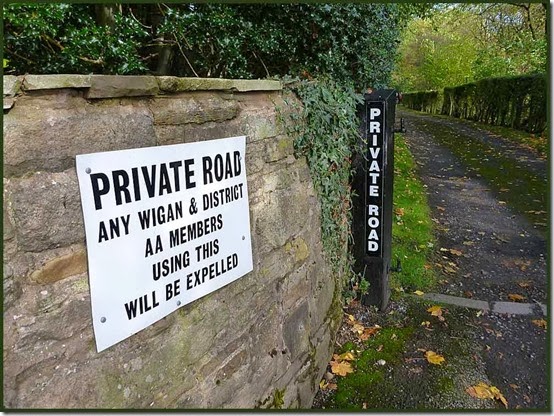 The green lane deteriorated into a minor road leading towards Heapey and the disused railway line. Reg related stories about secret storage depots for retired steam engines. There’s much more about it here.  There are rumours of night time visits by large lorries, ‘disused’ tunnels guarded by CCTV, locals who maintain a discreet silence, and much more.

An assortment of paths and tracks led us past disused railways, notably the Lancashire Union Railway, sometimes completely overgrown, sometimes converted to nice pathways on private land like the one shown below, and just occasionally on public rights of way where we could enjoy a stroll along the track bed. 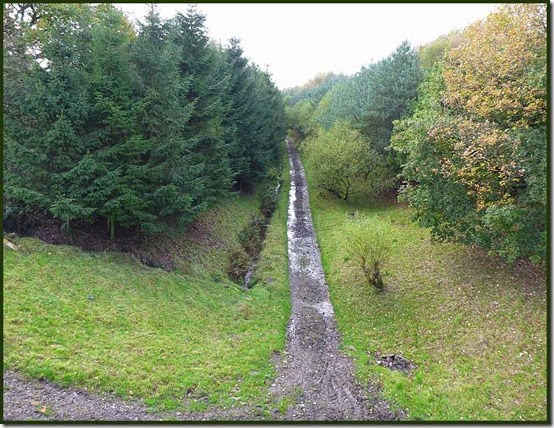 Then we crossed a few muddy fields and passed beneath lovely autumnal tree canopies. 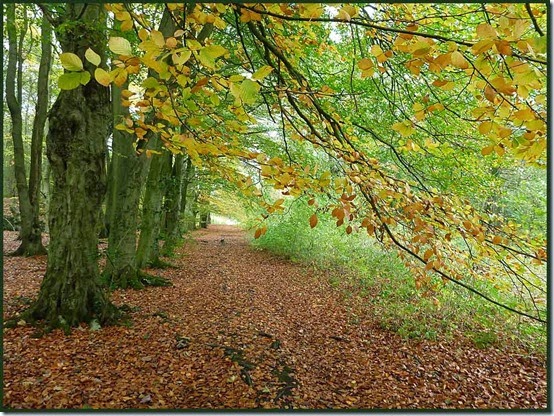 A large pond, with voracious ducks, signalled our entry to the village of Brinscall. 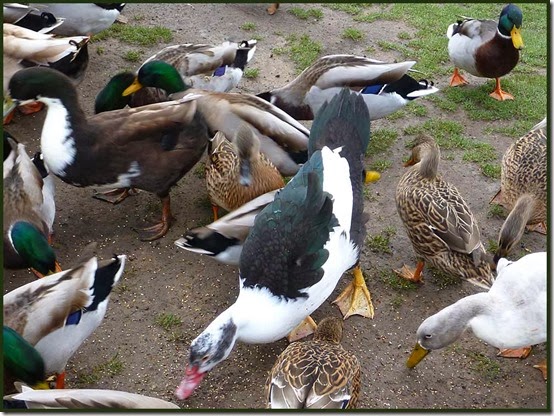 Lunch beckoned. Reg had warned the fish ‘n chip shop of the impending arrival of twelve hungry walkers, and we were soon ensconced on the pond side of a wrought iron ‘snake gate’ in a nearby park, with excellent portions of said fayre at just £3.80 a portion. 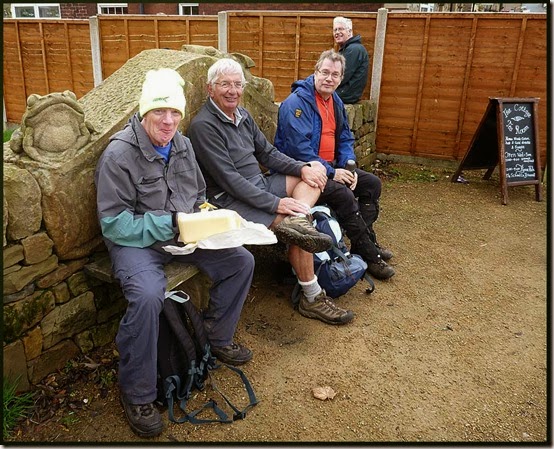 Plodder stops are fairly short, but thankfully longer than the regular LDWA lunch breaks, so we managed a good twenty minutes of relaxation before setting off on the last stage of today’s journey to Abbey Village. Much of this was on the track bed of the Lancashire and Yorkshire railway branch of the Lancashire Union Railway, linking Cherry Tree with Chorley.  The seven mile stretch of line served mainly to transport coal from Wigan to the mills of East Lancashire without having to go through Preston, and it lasted from about 1869 to 1968.  There are quite a few remains (platform, bridges, etc) at Withnell, which we passed through en route to Abbey Village.

The remains of a narrow gauge model railway lay below us at one point, unused since the death of its enthusiastic owner several years ago. A great shame.

Having reached Abbey Village, our destination, Reg decided we were either too early or not muddy enough. So he led us into a farmyard where even those with boots discovered the inundating effect of deep slurry. The farmer’s tractor was a bit of a give-away – it was armed with two sets of rear wheels. The field we were ushered innocently into was a trap.  Luckily there was no bull, but only three or four of us managed to escape over a barbed wire fence to the safety of a back alley. The rest circled aimlessly in the field until released by Reg, who had noticed that the bus to Chorley was now due.  Last time we caught this bus it had been distressingly early for those who had just purchased a beer. Today, fortunately, it was on time. This was perhaps due to the cautious driver, who nevertheless caused quite a commotion when he braked sharply to avoid a pheasant. 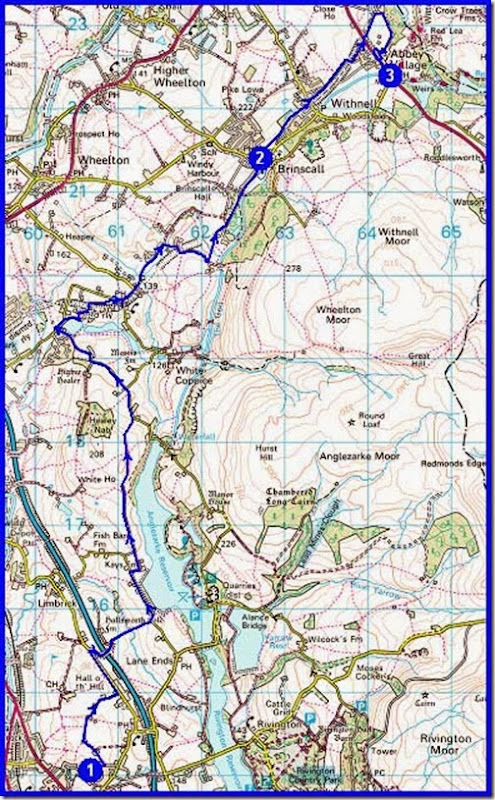 There are a few more pictures here. And Alan R’s excellent report is here.

I heard Reg say 11 fish and chips so presumed there was only 11 of us. Your group pic confirms 12 so somebody must have had no lunch? I will amend my post in line.
Good day out and thanks for the heads up.

I think you'll find 12 people in the picture at the head of my posting, Alan. Hilary and June shared one portion.