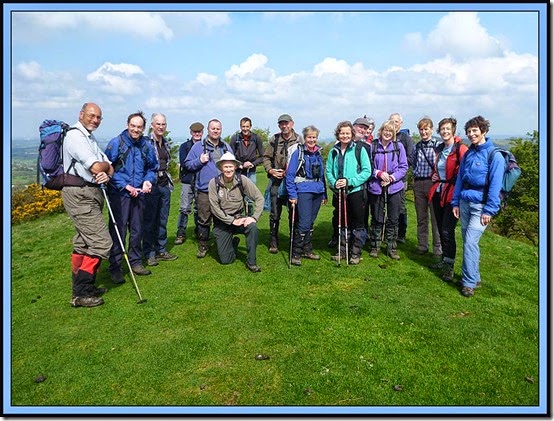 Sue W kindly organised this stroll in the Peak District. After assembling at Lamaload Reservoir at 10.15, 17 of us set off in the direction of Rainow on what Sue had advertised as an ‘11 mile bimble’.

Soon faced with serious route-finding decisions, we elected to go This Way. 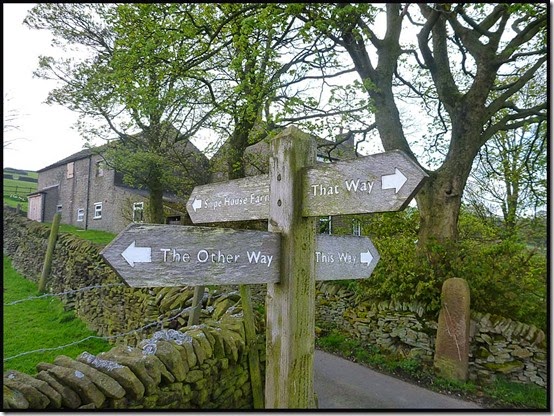 It was a fine, sunny, April day as we admired the view north towards Rainow. Arriving at the Gritstone Trail path that leads to the Saddle of Kerridge, with White Nancy already visible, we immediately diverted from it to ascend the steep side of  Kerridge Hill to a trig point that some members of the party wanted to ‘bag’. (A point that regular readers may recognise from numerous previous visits.)

Time for a group photo – see above.

After only 4 km, an elevenses break was taken before we headed to the end of the Saddle, where White Nancy, a folly built around 1817 to commemorate victory at Waterloo, overlooks the old mill town of Bollington. 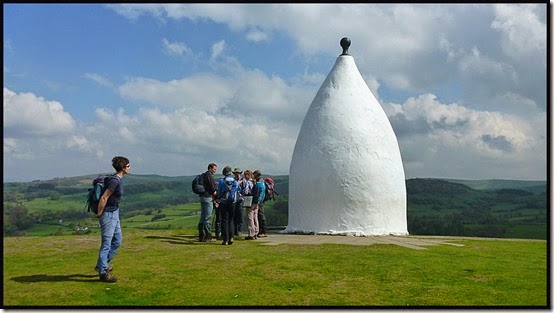 We descended quickly down the steep slope before heading east, now firmly on the Gritstone Trail for a few miles, with fine views of trees coming into leaf... 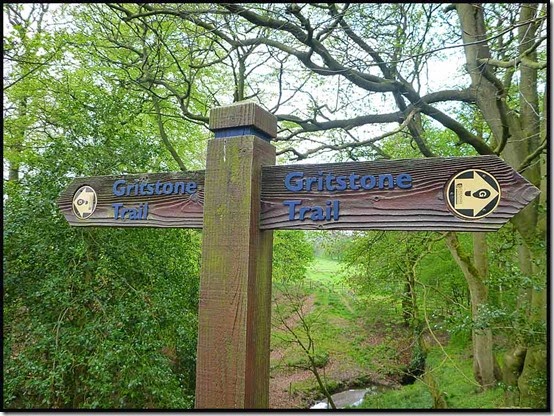 ... and the bluebell woods near Berristall Hall. 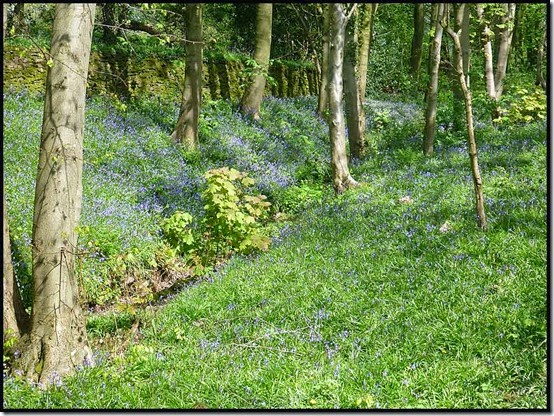 Soon after passing a sheep with a very newborn lamb, a shouting guinea fowl, and three docile ducks, Sue W urged "Come on you lot, it's eleven miles", the first sign of anxiety over the time we would finish.

Soon afterwards, we left the Gritstone Trail for good and took a diversion up an extra hill from Charles Head, thanks to a new permissive footpath that led to a short ridge with good views to Shining Tor, with Shutlingsloe just visible. We were careful not to disturb ground nesting birds like the snipe I nearly trod on.

From the ridge it was a sharp descent to Summer Close. 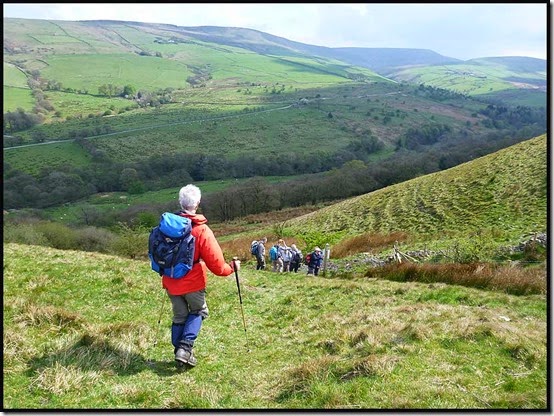 I'd expected to head straight to Shining Tor, but Sue W's 11 mile route took us away to the north east and Taxal Edge, where we lazed for a while at Windgather Rocks. 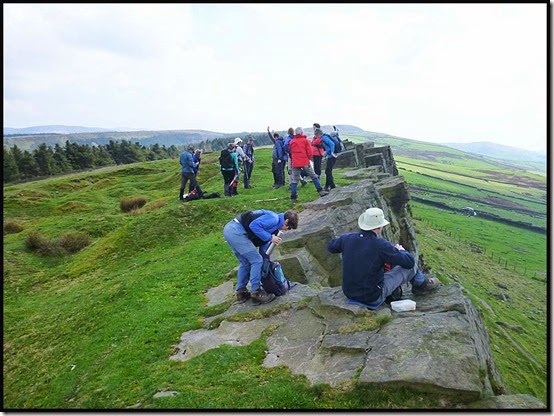 It's a pleasant stroll along Taxal Edge, above the Goyt Valley. Luckily Keith was making good progress after his illness, so he could just about manage 11 miles. 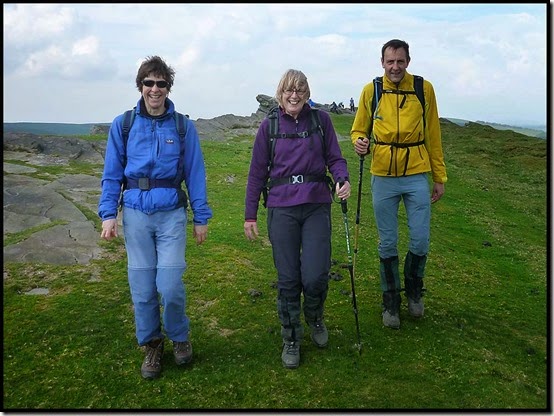 We rested at length above the Cat & Fiddle road at Shining Tor, the highest point in the area at 559 metres. "Is this bimble really 11 miles?" asked Graeme "... it seems like more…?" 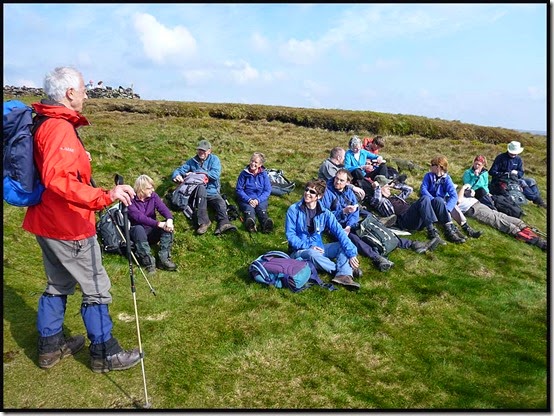 Soon we were off and away on the last lap over Andrew's Edge, where Andrew wasn't waiting for us, and down to Lamaload in the afternoon sunshine.

Lamaload Reservoir, reached soon after 5pm, was glinting in the early evening light. 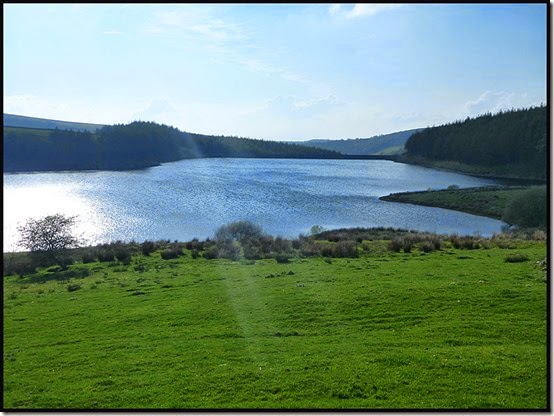 Here’s our route - 25 km with 750 metres ascent in 7 hours. "An excellent 11 mile bimble", announced Sue W. Nobody disagreed apart from a slight debate about the distance. 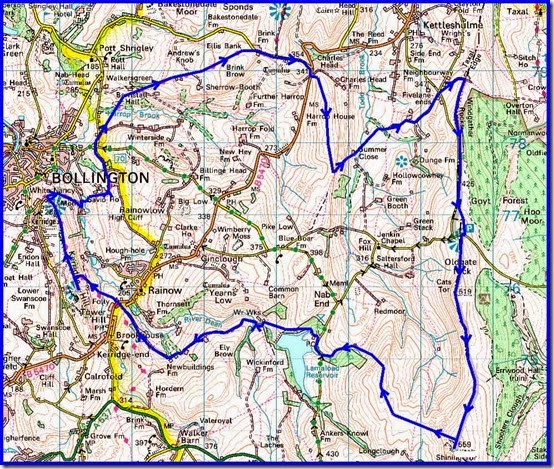 Then we all went home for tea. Thanks for organising, Sue, and it is indeed a most pleasant route. Visitors from Greater Manchester may find it more convenient to start from the Middlewood Way car park in Bollington.