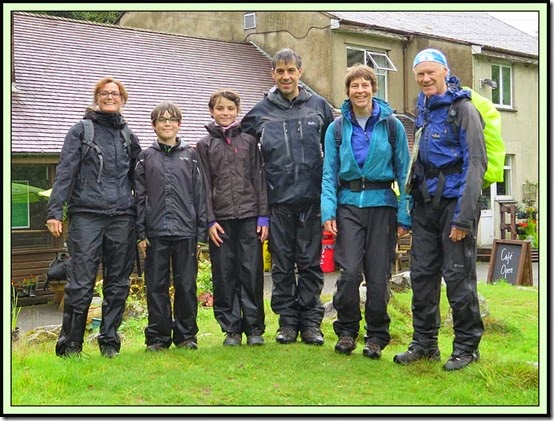 A ‘gang of six’, pictured above L-R: Hazel, Andrew, Kate, Alastair, Sue and me, had the pleasure of a visit to Borrowdale Youth Hostel.

After pottering up the M6, we found Friday evening in Keswick to be very pleasant. 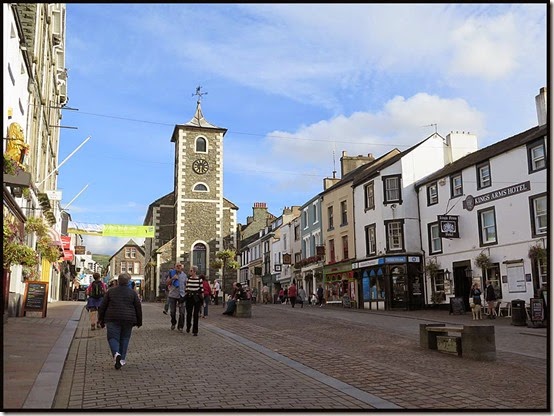 Behind the Moot Hall, an excellent fish and chip shop satisfied all our needs, before we adjourned to the Youth Hostel, which is between Rosthwaite and Seatoller. It proved to be friendly and well run, and although it was very busy everyone seemed to have enough space. Self cooking facilities were perhaps a little cramped, but the hostel catering that we took advantage of was very good.

Saturday - Hazel and I went for a walk from Honister Hause whilst the others tried the Honister slate mines Via Ferrata.

Waterproofs were soon required as we marched to the summit of Black Star on Honister Crag (633 metres). From there it was an easy passage to Fleetwith Pike (648 metres), where Hazel is pictured with Haystacks and Pillar leaning on her right shoulder. “Much quicker than the Via Ferrata route” we agreed. 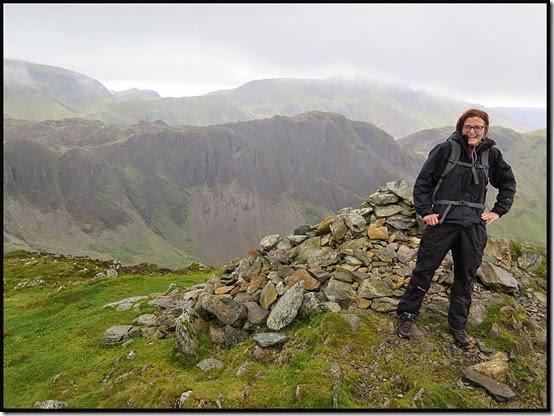 The slopes were purple with the Ling variety of heather - that's Kirk Fell in the background behind Haystacks. 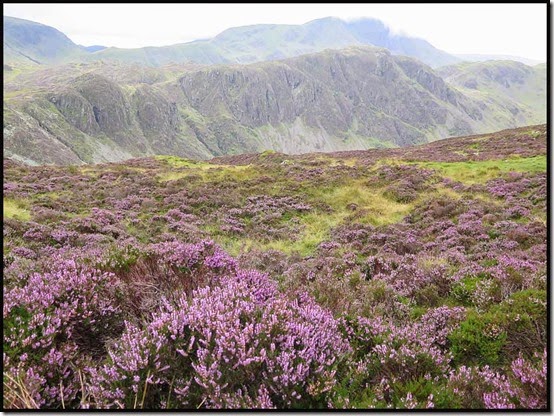 The mist cleared from Pillar as we descended past the disused quarry between Fleetwith Pike and Haystacks to the top of Warnscale Beck, where we enjoyed good views towards Buttermere and Crummock Water. 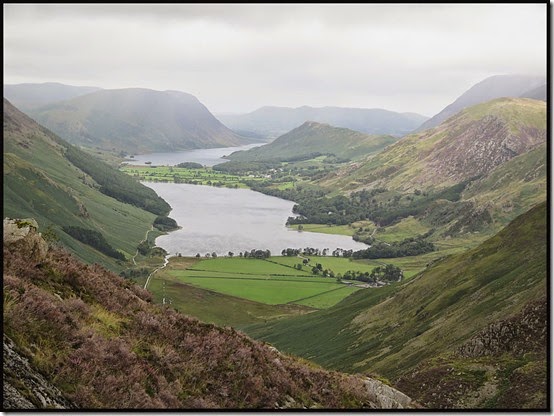 We continued on to Grey Knotts (697 metres) in deteriorating weather, before descending to Honister Hause for lunch in the Mines café. The others were expected back at 11.30 but as a result of one of the group suffering from vertigo they were 45 minutes later than estimated, so Hazel and I could have gone up Brandreth as well… Meanwhile, Sue, Al, Andrew and Kate had enrolled for the Via Ferrata. Kate was raring to go. 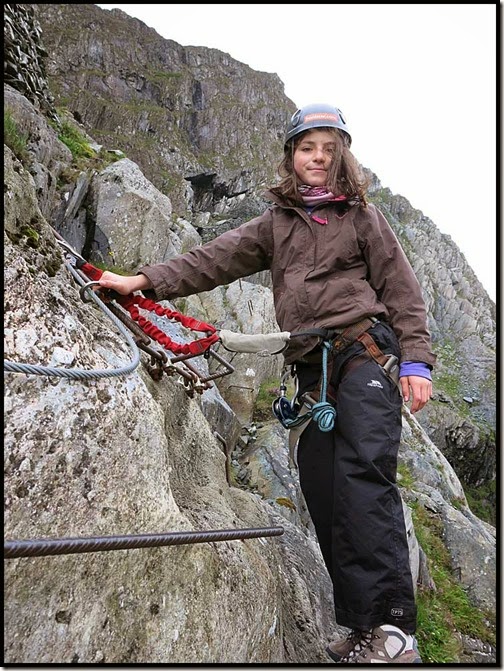 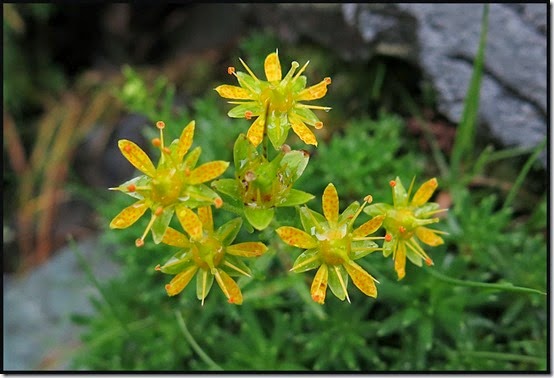 There were gullies, rock traverses and numerous stempled ascents. 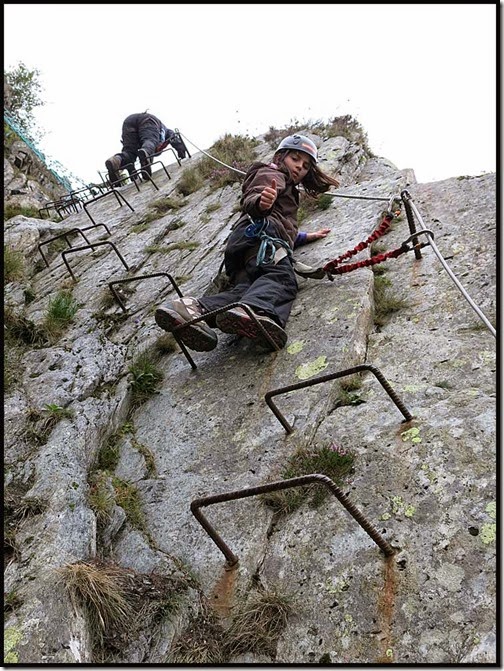 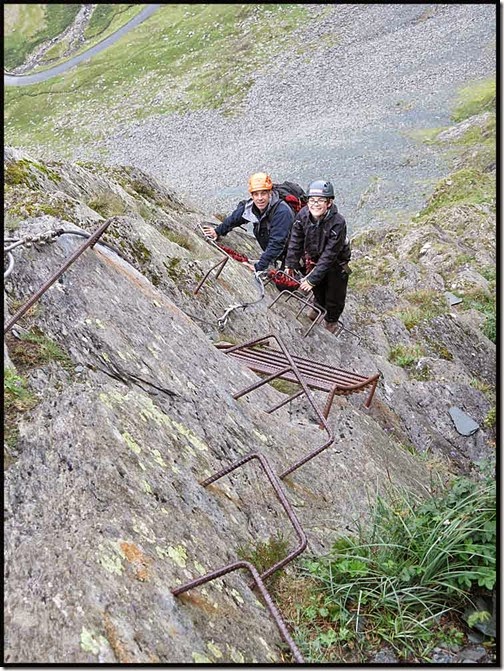 Scary cliffs preceded a wire bridge. (Not good for the lady with vertigo!) 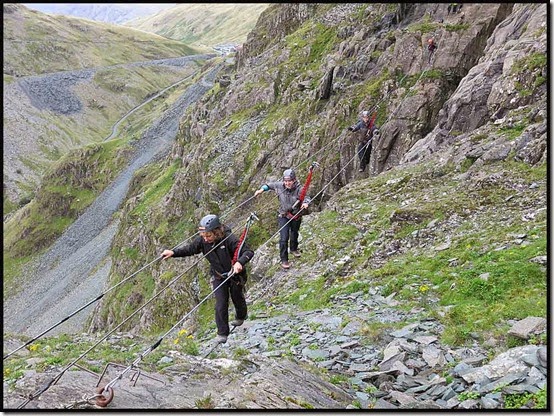 An iron platform was followed by a large blue net that is clearly visible from the road far below. 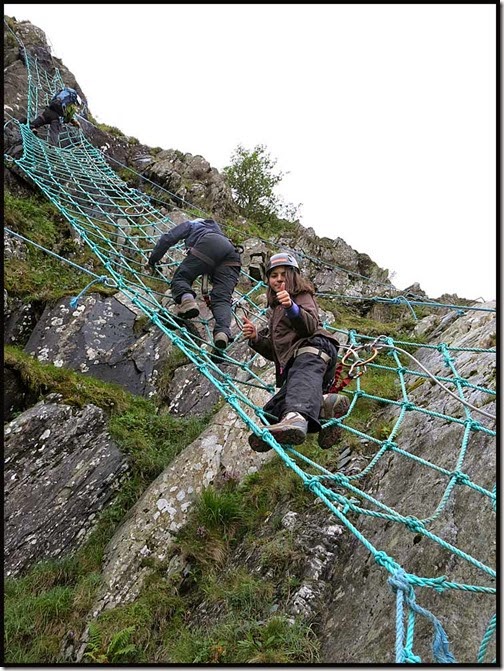 There were lots of information boards, which feature in the slide show (see link at foot of posting), and there is more on the history of Honister, where it is believed that the first slate was probably mined in the Roman era (although it is quite possible that it began in a more haphazard way in prehistoric times), here.

We all met for lunch back at Honister Hause, where a lone Baguley locomotive sits outside. This is a diesel loco, built to look like a steam one and judged by aficionados to be ‘fake’. There is doubt as to whether it ever worked in the slate mine, one correspondent believing it to have arrived from the Butlin's Camp Railway in Filey where he thinks it ran from 1953 to 1975. 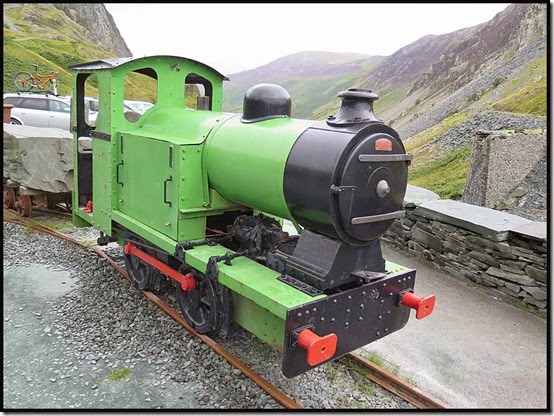 Driving down to Gatesgarth, we stopped to look up to Fleetwith Pike and spot the helmets of the punters on the Via Ferrata, and the large blue net.

The six of us decided to walk around Buttermere, soon reaching Comb Beck in the rain, with High Stile hidden by mist. 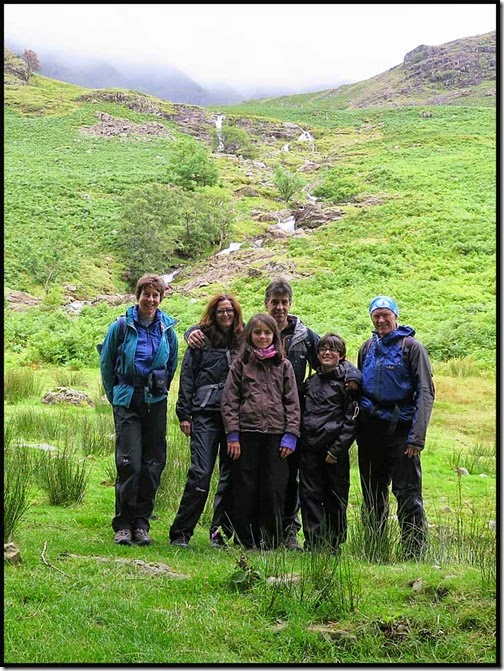 A good path through the woods led to a beach where Kate and Andrew fought over the possession of a small island, whilst the rest of us tried to skim stones on the lake. 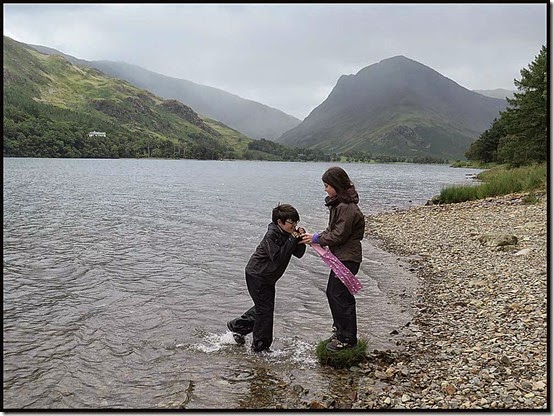 At the village end of the lake the rain thickened and Andrew built an impressive stack of slates from which he nearly fell into the lake. 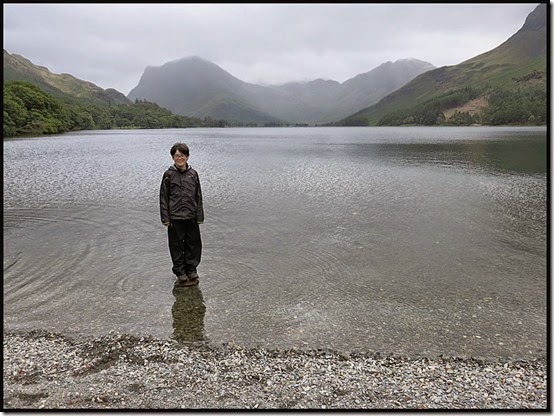 "We are on holiday in the middle of summer. You will eat your ice creams." 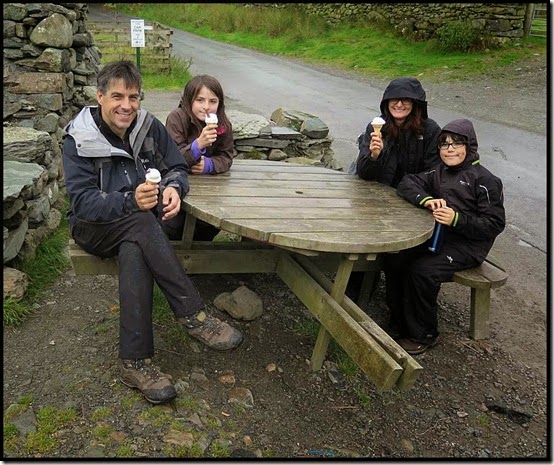 Here’s our route, starting from Gatesgarth - 7 km with 150 metres ascent, taking rather less than 2 hours. 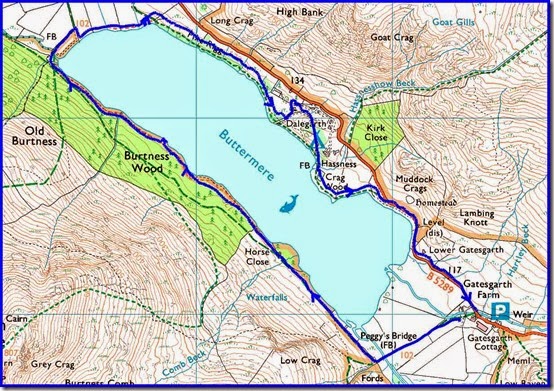 That left plenty of time for R & R and a few games back at the ‘open all day’ youth hostel, which also has a café/bar that is open to the public.

Sunday – the rainy morning of 17 August found us heading along the chain aided path from the hostel to Folly Bridge. 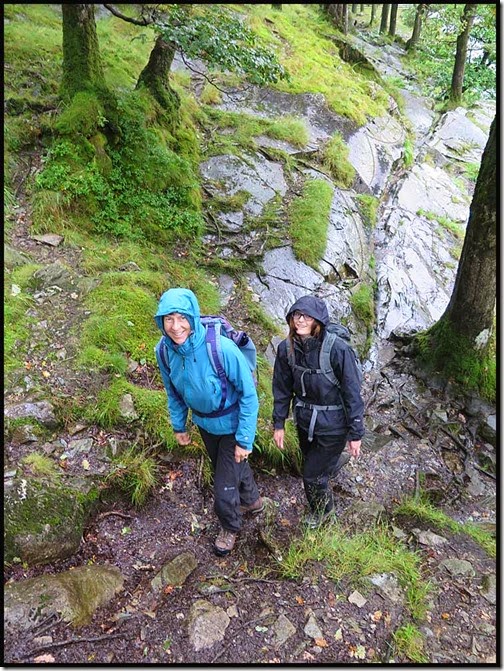 Folly Bridge (no picture – it was raining heavily and my waterproof camera was at home), cost £25 to build and is a Grade II listed building. Next to the bridge is an inscribed stone with the text as shown below.

It was raining hard as we tramped over the bridge and across the field to the row of cottages called Mountain View. 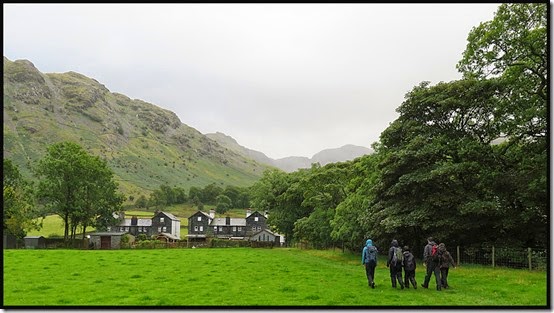 A circular walk over five minor summits in the direction of Glaramara was planned.

Combe Gill looked full as we ascended briskly in the direction of Thornythwaite Fell. 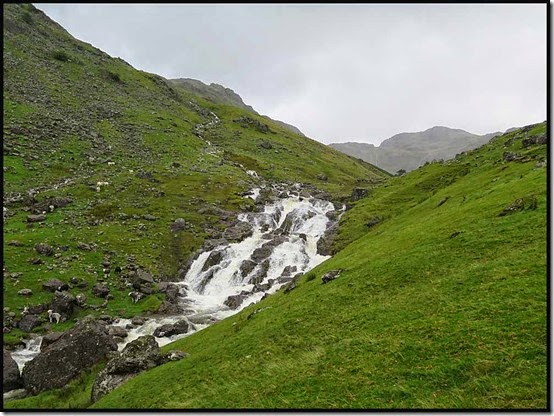 Shortbread (CCS) was issued in the rain in an attempt to maintain spirits, and despite the heavy rain where we were, there were occasional flashes of sunshine as we looked back towards Derwent Water. Castle Crag is visible, just off centre. 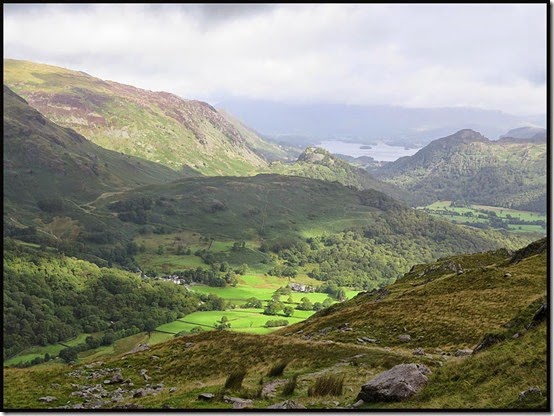 A necklace of streams graced the slopes of Glaramara. 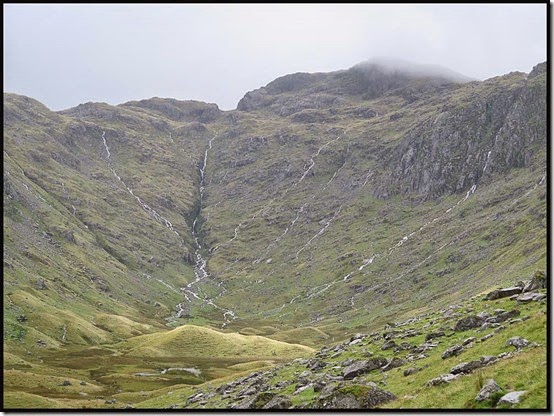 We continued bravely on and upwards and yesterday's Via Ferrata team were impressed when they looked across to the near sheer face of Fleetwith Pike to which they had been fastened. 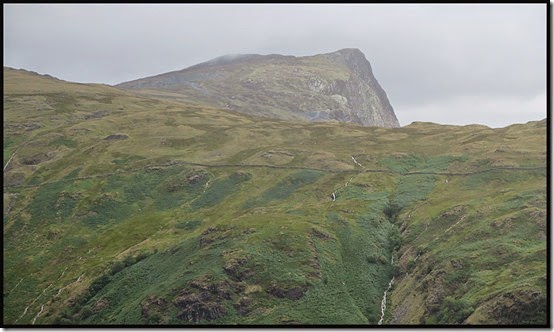 We’d had enough by the time we got up to about 550 metres, as we were being drenched by violent rain egged on by a 50mph wind. A quick look at the GPS revealed that we’d almost reached our first target, so four of us crawled up to the 574 metre summit that lay just next to the path on the long undulating ridge.

I whipped out the camera to record the unpleasantness of Thornythwaite Fell on a summer’s day. 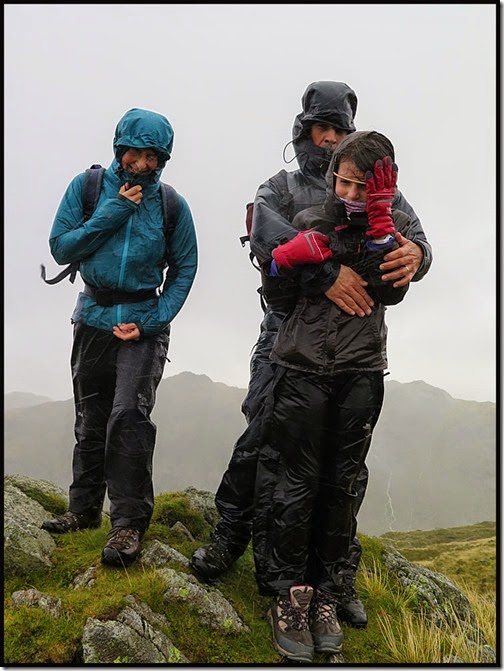 The Really Foul Weather drew a unanimous decision. We turned tail and returned quickly to Borrowdale, where the river levels had risen significantly.

The weather wasn't really conducive to photography, or walking, so we went to a tea shop in Grange for lunch, then we went home. 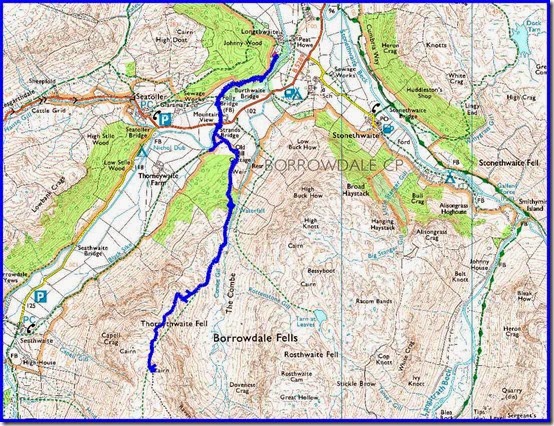 Despite the weather, this was a really excellent trip, in the best of company, and highly enjoyable throughout. Thanks go to our good friends for inviting us along.

That shot of Keswick high street brings back memories of raucous nights in The King's Head and the naivety of youth, and happy days climbing in Borrowdale back in the Sixties.

Me too Conrad, only it was the late sixties/early seventies and the raucousness took place in The George.Even though we visit the Lakes at least once a year I can't remember the last time I had a pint there. Must put that right soon. There will be mo raucousness though.Good trip Martin.

Thanks Conrad, Gibson. I've never been a climber, and I don't recall any rowdy nights in Keswick's pubs. Perhaps that's because Maggie's parents had a B&B in Keswick with an adjoining cottage. We spent many a happy New Year there, teasing the budgie and nipping up Skiddaw before brunch on NYD. I do remember some rather less decorum being exhibited on visits to Borrowdale, Langdale, Buttermere and Wasdale (and maybe others that don't come instantly to mind. Paul Brunn (RIP) delivered some impressive monologues on these occasions and had a habit of sleeping on his tent rather than inside it.
Happy Days!

Borrowdale in the rain! I feel it calling as I look at those happy wet people. Nice pictures Martin. I must investigate the youth hostel.

For me, the multi-course dinners at the Scafell Hotel often wins out for a short stay. And sometimes Seatoller house for a sociable time.

Good to hear from you Paul - you may like me be undertaking the enjoyable but time consuming job of sifting through an assortment of backlog blog postings.

The hostel at Borrowdale is a good choice with children in the party, and whilst more costly than in the past, it's still much cheaper than a B&B. There were quite a few Coast to Coasters going through.
We find the Mary Mount Hotel a good place to stay from time to time, though our next visit will be to somewhere more luxurious...

It looks like a great weekend Martin even if the weather didn't comply! We'll have to try and join you all next time - I have just been looking at our pics from 2011 on Helm Crag!
Lyn