Sunday 31 May 2015 – Resurfaced Towpaths on the Bridgewater Canal 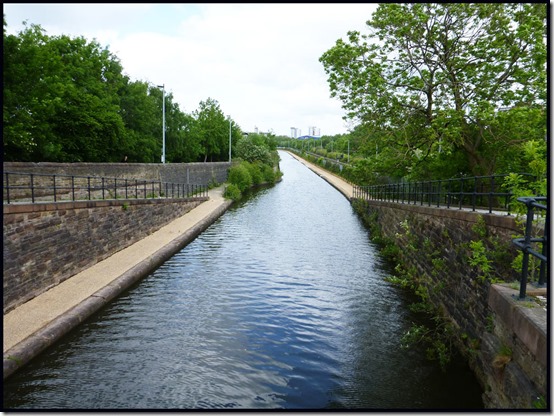 Having received some positive information from Jan Williams at Saturday’s parkrun (congratulations to Sue on breaking her PB, by the way), I decided to cycle towards Manchester beyond Waters Meet, from where I know the Bridgewater Canal towpath has been resurfaced as far as the swing bridge over the Manchester Ship Canal.

I had thought the resurfacing on the Rochdale Canal link via Castlefield ended shortly after Waters Meet, so I expected to encounter mud fairly quickly. It was therefore a surprise to discover that the towpath has been resurfaced all the way to Castlefield. Great. If I was still working in town I could now cycle mainly off road on a firm surface and be at my desk within an hour, which is the time it used to take me by car.

No wonder I seem to be encountering more and more commuting cyclists when I go out at certain times. I just hope they remember that they are not the only users of the towpath and they respect others, especially dog walkers, who shouldn’t be expected to keep their charges on leads.

The top picture shows the new surface heading towards Castlefield from Throstle Nest Bridge, where the towpath crosses the bridge.

As I passed through Sale I noticed these ‘hooligans of tomorrow’ being herded in large numbers by their obnoxious parents. 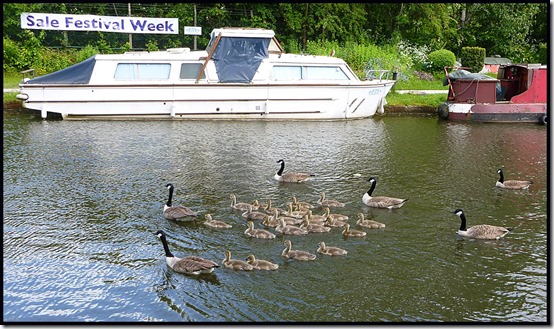 If only we were allowed to trap them, I’m sure they would provide some tasty snacks!

Shortly before reaching Castlefield I decided to try to find an off-road route along the northern side of the Ship Canal, to get to the swing bridge and return home alongside the Bridgewater Canal. Taking a convenient bridge, this worked fine for a while, but beyond the BBC studios a short section of road was needed before the pavement incorporated a cycle track. The final section into Eccles was also along a road.

This ride does provide a good route from Timperley that doesn’t involve any mud. The path I took is shown below – it was over 32 km, but if the exploratory diversions are ironed out it would be about 30 km from Timperley Bridge. 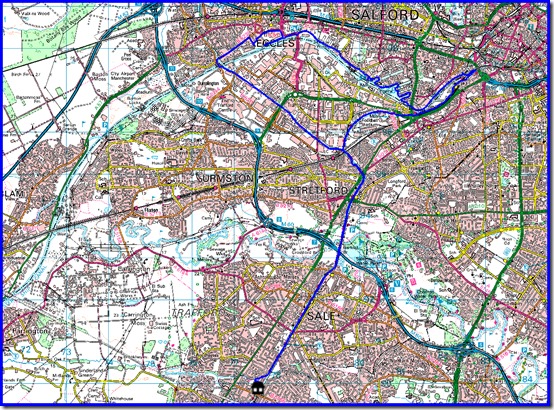 Thanks to Jan for alerting me to this, and to Mike’s excellent ‘Mad Cycle Lanes of Manchester’ blog that Jan also put me on to. Anyone keen on cycling off-road in Greater Manchester could do worse than take a good look at some of Mike’s postings.

Ah, my blog posting experiments and tests have been in vain! Good news about WLW, I tried it last night but had no joy.
JJ

I'd been trying it from time to time and this afternoon it suddenly worked. The website you found last week now says:

Update 1 Nick from blogger team has confirmed that they have tied up their hands with Microsoft to get this problem fixed as soon as possible. So possibly we might be able to use windows live writer again in full form after the update will be released.

Update 2 I have posted a very nice solution below that will help you in posting your posts in a full formatted way using windows live writer and live main in combination, this will upload images and everything easily. [This differs from the previous suggestion - M]

Update 3 The error has been fixed this morning [2 June], and now you can once again post using Windows Live Writer, make sure to create App Password if you are using 2 Step Verification in your Gmail. A big thanks to Google and Microsoft for helping in fixing this error that caused a lot a trouble among blogger all over the world.

Re my earlier comment, whilst I appreciate that the problem has been resolved, personally I can't really offer thanks to Microsoft and Google for sorting a problem of their own making. They must have known about it more or less as soon as it arose, and

1) Google should have anticipated the problem when it made the changes that caused Microsoft's WLW to fail, and

2) both Google and to some extent Microsoft failed to inform users of the problem, causing people like you and me to spend hours wrestling pointlessly with their broken software. In particular, Google could surely have put up a short message that would have appeared at the top of any 'WLW/Blogger' search results.

Microsoft's attitude seems to have been along the lines of 'if 20,000 people re-tweet this message, we may think about doing something' rather than 'sorry, we have a problem due to changes made by Google, and we are trying to fix it'.

Luckily, common sense seems to have prevailed, albeit without any apology, so we should be grateful for that.

So the towpath is finally open all the way from Timperley to Manchester?. I've had a couple of arguments with workmen the last two occasions I tried it, they had parts of the path closed (unnecessarily) that were not mentioned on the website and I ignored them, but the section by MUFC football ground and beyond was barred by a tall fence despite the website saying that it should have been finished last year.

Yes Geoff, unless my ride described above and the blue line on the map are figments of my imagination, the towpath is open all the way from Altrincham to Manchester, and may have been for a few weeks - I've been away.

I found the workmen on the Stretford to Altrincham section to be friendly and helpful whilst they were doing that section, though obviously there was a period when it made sense to close the towpath.

FYI: We did the whole Bridgewater Way route from Altrincham to Manchester this week and did our own report: it is indeed open, yet the prominent red 'Footpath Closed' sign is still there just before the freight terminal/MUFC section.

Thanks Geoff, your report is here, with some nice up to date photos of the route into town that has often been referred to in 'Postcard from Timperley'.

Hi Martin
Thank you for the mention
The Bridgewater canal path is brilliant now it's finished and it means there is an option to cycle directly to Manchester completely off road.
Also I agree with what you say about those fowl hooligans
Keep the blog going and all the best for your future adventures
Speak at parkrun
Cheers Jan:-)

Thanks Jan. If I could go just a bit faster we could chat during the parkrun! I'll be missing for a few weeks after this coming Saturday, but you should be able to keep up with my travels here, and later in the summer my reports on a planned TransAlp bike ride may be of interest.