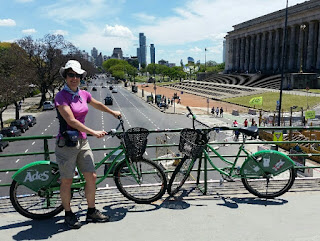 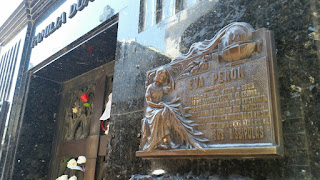 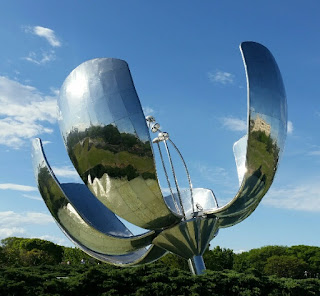 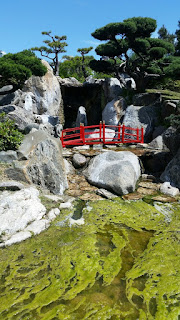 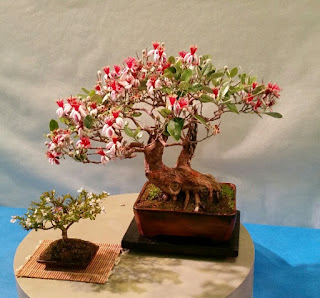 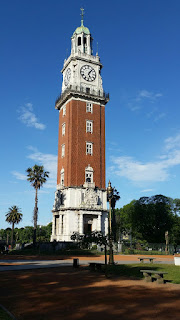 Ooh, lots of comments, by the standards of these pages anyway. We do like comments even if they mean

- looking for tractors for Alan (none yet)
- remembering to photograph the occasional meal for Robert and Lyn (aka Brexton T)
- trying to find interesting number plates, and anything else contentious, for Alan S
- HMP3 will be pleased to spot anything sophisticated or linguistic - that's a tough call!
- Alistair P and others will be happy to see some nice pictures - I'll keep trying
- Wuxing Nick will no doubt be keen to see if we follow any of his suggestions, which are received with thanks even if we don't take them up
Jenny (aka Nightbird) will be delighted to discover that we have followed one of her suggestions
- Louise, Conrad, Gibson, JJ and others are easy to please. We just hope you continue to enjoy following our travels.

Blogging from here in BA is very easy as there is wifi in the lounge of the hostel, but we don't think this will be the case when we leave the city, so there may over the coming weeks be long gaps between transmissions. Please bear with us - we enjoy writing this diary at least as much as you enjoy reading it. Or we wouldn't bother!

Last night we learnt about the eating regime in Buenos Aires. After virtually fasting since breakfast we sought an evening meal. Not as easy as it sounds. Lots of folk out shopping; snack bars, McDonalds and Burger King. Eventually, after 5 km of wandering we resorted to a quiet and very mediocre pizzeria next to the hostel. That's not the way to do it. Today would be different, or so we promised ourselves as I jotted these notes whilst enjoying a hearty buffet breakfast at the hostel.

BA bikes was our first destination. About a kilometre from the hostel, but not far enough for my Garmin gadget to get to grips with some unfamiliar satellites.

The  bikes, pictured somewhere above, are true Tour de France quality. Mine has 30 gears, operated by adjusting my weight on the saddle. The traffic here is so gentle and considerate that we didn't bother with helmets, relying on our sun hats for protection. Designated bike lanes make travel easy, despite some wide roads. I counted thirteen lanes of traffic at one point.

Black and yellow taxis buzz around like adolescent teenagers, reminding me a little of Alexandria, but far less frantic, and the vehicles here are newer and less dented than their Egyptian cousins.

Meanwhile, police cars tour the streets sedately, even when flashing their bright blue warnings. They are Ford Mondeos with specially fitted rubber bumpers extending their length by over a foot, front and rear. I failed to spot any interesting number plates. Duh!

Our first port of call was the Cemetery.  Tomb City. Resting place of many of the great and good of Argentina. The biographies or obituaries of those ensconced in this place could extend to many volumes. Eva Peron is the most celebrated inhabitant.

A visit to a huge metallic petal, Floralis Generica, followed. An information board indicates it was built by Lockheed in 2002. Apparently the petals close at night.

Café Martinez provided a good lunch - Ceasar salad con pollo all round. Not quite the 'set meal' that we intended, but more than a good snack. Given last night's experience, and based on research, we decided to make lunch our main meal of the day, with beer and snacks later, rather than forlornly seeking an early evening restaurant, if such a facility exists here!

A short pedal from the café found us at the Japanese Garden, one of the biggest outside Japan and rather more cheerful than the cemetery. A lazy wander, admiring the vast numbers of giant carp and bonsai trees, was punctuated by an arresting halt outside an ice cream stall. Every man and his baby were out today, enjoying the hot spring weather. 28C again. The pace of life in this city seems a bit more relaxed than the northern hemisphere franticity we are more used to. Here everyone seems calmer; screaming children and barking dogs don't feature.

The trees that aren't already in leaf are bursting forth with spigots of green. Parrots in the foliage remind us of Wythenshawe Park on a sunny Saturday morning. Pigeons fight over their mistresses, until a sliver of bread distracts them. Tree sparrows peck, cormorants eye up the carp (too big, they settle for something smaller). South American species of dove, thrush and starling settle for anything available.

Our bike ride, which turned out to be around 26 km if the gadget can be relied upon, continued into a vast area of parkland, complete with boating lake, rose garden, myriads of cyclists and skaters, rock bands, and what seemed like a considerable proportion of Buenos Aires' population, all enjoying the sunny day.

The place is littered with statues, sculptures and memorials. Too many to mention in any detail. We returned to the hostel via Torre de los Ingleses, a 75 metre high tower given to the Argentines by the local British community when the two nations were as friendly as they should be now. It was to commemorate the centenary of the May 1810 independence revolution, and was built largely from materials shipped from the UK. After the Falklands war its official name was changed to Torre Monumental,  but many people, including the publisher of our street map, still refer to it by its original name. Perhaps some Argentinians are as indifferent to the Falklands as some of us across the ocean.

Nearing the hostel, our way was blocked by two parades. First, a massive Gay Parade. We skirted around the pink buses and embracing couples, before coming upon a Drum Parade on Mexico Street. It's still going on; we can hear it from our window as I write this long after 7 pm. The bit we saw featured gyrating dancing girls in black underwear, followed by a posse of brightly coloured drummers. It was, and still is, very noisy. Perhaps they are going round in circles!
I'll leave the identity of today's pictures to your imagination.
Posted by Phreerunner at 22:59

I should have loaned you Lord Elpus's Flag of St George to use as a shawl for the cooler evening air, when visiting the English Tower.

I'll let the Argie Press know you're on your way, Sir!

I hope you got a photo of the "dancing girls in black underwear" - the very thought perked me up this morning.

Ok - I get you might prefer green bikes to a yellow bus in the beautiful Spring sunshine :-) But please don't leave BA without visiting a parrilla - even if they.don't start to open for dinner until 20:30, and are full until well after midnight...

Actually there's no problem with being English here. And we don't intend to create one Alan, though Lord Elpus if he was here!

Sue was in charge of photos at that point Conrad. It was too noisy for me. So you'll have to wait until the slide show. There are a few 'dancing girls' tangoing around so I'll see what I can do for you...

Oh dear Nick - we might miss that excitement as we have an early flight tomorrow. How the people of BA find decent food still remains a mystery. We are generally pretty good at locating it, but not here.

It was a close thing between the bikes and the bus. We would have liked to do both.
Sue has now woken up and is busy researching parrillas on her ipad, which seems to get a better wifi connection than this S5 phone.
Episode Three may reveal more...

A nice snack for any time of day is 'empanada' - like a cornish pasty, with different fillings - veg or meat - available in any bar...

Thanks Nick, we considered empanada yesterday, but ceasar salad won the day I'm afraid. We didn't realise you were an Argentinian aficionado - we'd been looking to Ian Inch for these sort of comments. Once upon a time we nearly came here to his wedding, but in the event we celebrated it from afar - on top of Catbells together with Ken and Helen (I think) and a photographer friend of yours, to name just a few of those present.

I'd love to see the metallic Floralis Generica in action, what a wondefully ornate piece of engineering.

Apparently the flower 'broke down' for a few years, because of a design flaw, but it works now. We didn't check it out. Cycling during the day is fine here, but the 13 lane carriageway you have to cross may be a bit daunting on a bike after dusk with no lights.

Delighted you took up my suggestion of hiring bikes, such a great way to get around. I was also wondering why there are no pics of the gyrating girls!