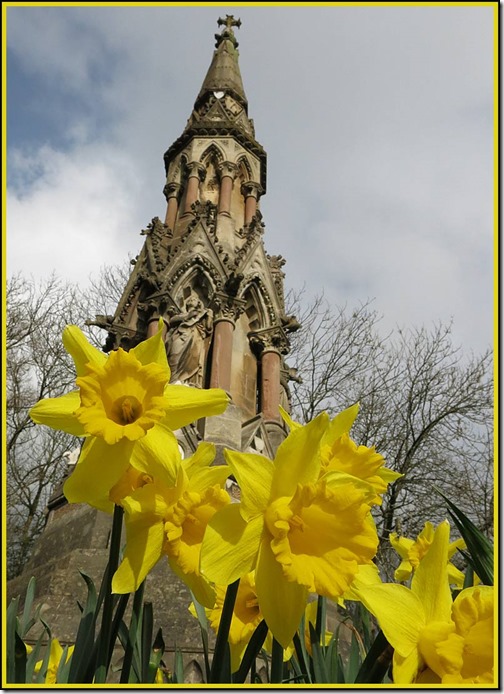 It’s that time of year again. Sue W organises a ‘rentahostel’ weekend whereby about thirty of her old mates enjoy sole occupancy of a youth hostel, with volunteers contributing to the breakfasts and Saturday night’s meal. It all makes for quite an economical weekend, this year’s total costs amounting to less than £40 per person, despite some lavish catering.

About thirty ‘mates’ assembled on Friday evening in the Herefordshire town of Kington, mostly in the nearby and apparently very welcoming Oxford Arms, where the landlord was reported to be a star, and the food delicious. Sue and I had eaten at home and were late to arrive after our two and a half hour journey.

Saturday morning – whilst a small splinter group headed for the Black Mountains, a large group of over twenty walkers preferred to walk directly from the hostel. It’s an ideal place to start a walk, with many options from the town’s position straddling the Offa’s Dyke footpath and a number of other trails.

After a little debate, everyone seemed happy with a circular clockwise route starting with a walk up Hergest Ridge on the Offa’s Dyke path. Here are some of them getting ready at our youth hostel base, a fine building that until a few years ago served as a cottage hospital. 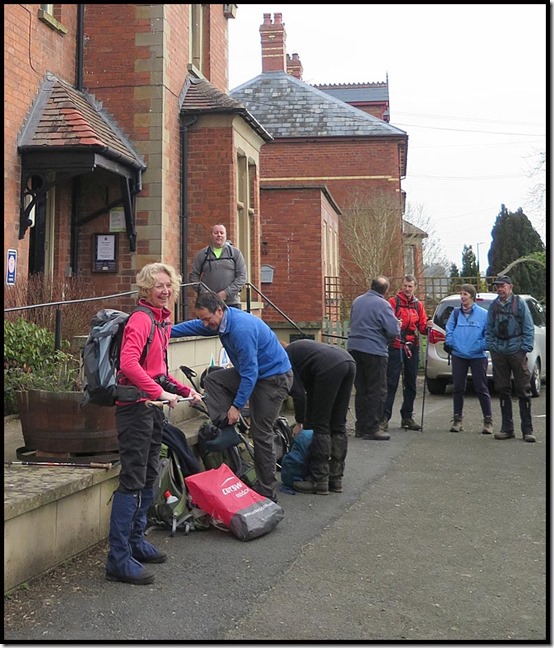 We strolled up the narrow main street of Kington, a border town that for business now relies heavily on its status as a walking centre.

The wild boar and fallow deer that roam the streets are culled by the local butcher and offered as ‘street kill’ to passing punters. 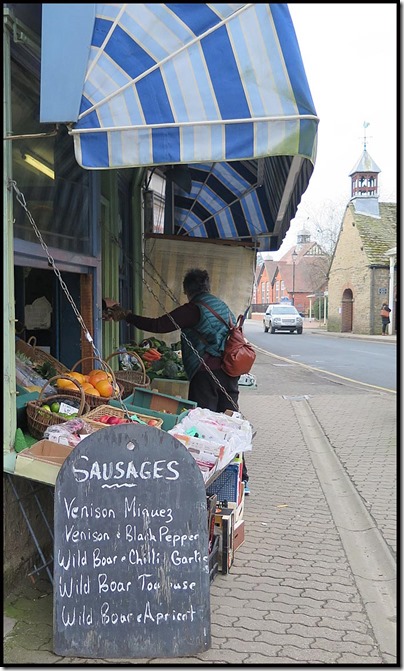 We paused to read a plaque that informed us that in 1892 only 1% of the town’s dwellings had a bath and tap, and none had a hot water system. It may also have explained that despite being only two miles from the Welsh border, the town has been English for over 1000 years. There’s more information on Kington here. 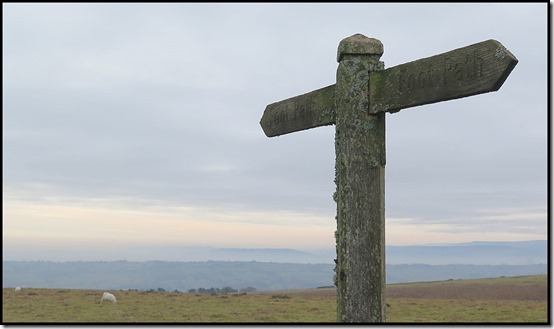 Monkey puzzle trees grow in a small copse near the summit. Perhaps the nearby Hergest Croft Gardens have something to do with their presence?

There's a good bench and a plaque in memory of a local lady who died in 2006, sadly at the age of fifty. 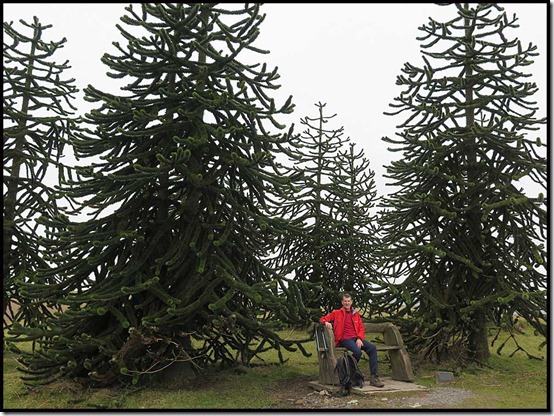 Jon and I shared the bench for an hour or so whilst the others caught up.

There were limited views through the haze as we ascended the ridge.

The ghost of a chap called Sir Thomas, and also that of the Black Dog of Hergest are said to haunt the area around Hergest Ridge. The Black Dog's sighting reputedly presages death. It is also rumoured to have been the prototype for The Hound of the Baskervilles, as Conan Doyle is known to have stayed at nearby Hergest Hall shortly before he wrote the novel. Phil was the only person to spot the dog*.

We duly reached a trig point at 423 metres, but this wasn’t the summit, despite its good views towards the Black Mountains. 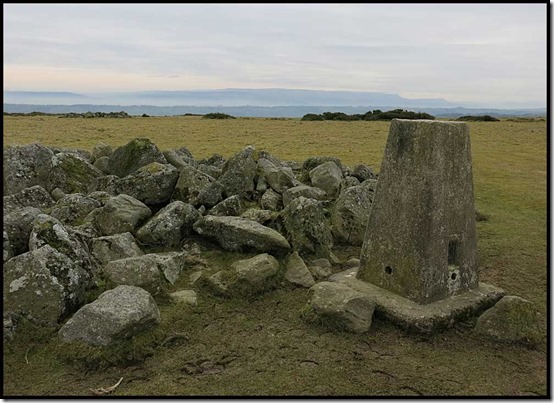 Nearby, at 426 metres, there’s a jumble of rocks, just a bit higher than the trig point, with a distinctive ‘pointy’ rock signifying the summit.

Keith made a futile bid to reach the pointy rock (the high point is near his left hand), whilst GS strode on manfully towards the border with Wales. 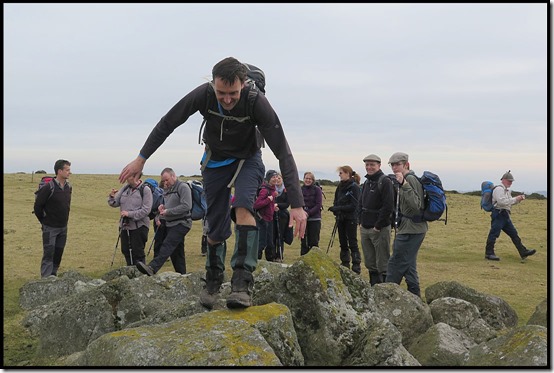 I'd intended to go round the side of Hanter Hill (414 metres), but the troops rebelled and shot off up to the summit, from where Robin and Josh took time out to admire the view during their half hour wait for the slower contingent. 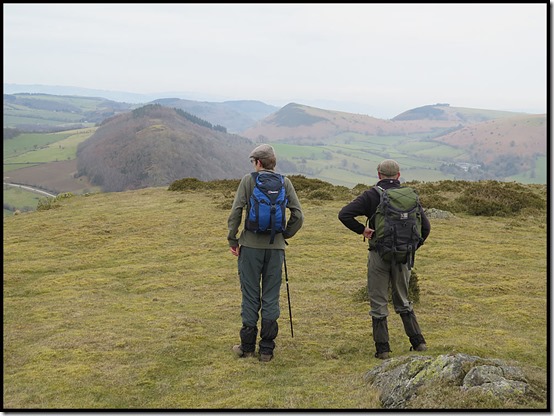 To the left was a vision over a Welsh quarry (Dolyhir), a highly industrial landscape.

A sharp descent brought us back down to Lower Hanter. The folk who had rushed up Hanter Hill had perhaps not realised that they were already quite high and the descent through gorse could be a little tiresome, so they elected to go around the next two hills, skirting both Worsell Wood and Navages Wood before 1pm. En route we spotted a pair of peregrine falcons, gliding gracefully beside a rock face. During the weekend we also saw many buzzards, a few red kites, a hedgerow of yellowhammers, a hillside of skylarks, siskins and many commoner species.

"It's lunch time" announced Sue, her eyes glued to her Fitbit watch, arriving after the people at the front had already started eating theirs. 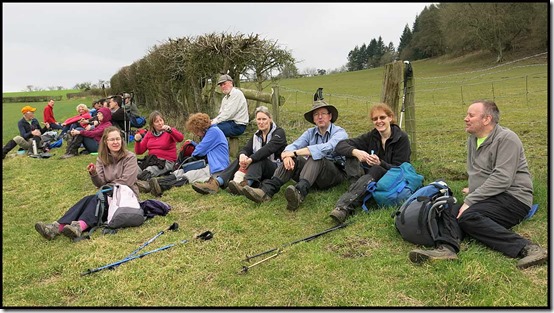 After another half hour break (actually 31 minutes 29 seconds, 1 minute 29 seconds longer than scheduled – I’ve been reading ‘The Rosie Project’) we were ready to shuffle off again.

GS left us near here, after fields containing new born lambs, to skirt around Herrock Hill and dash back to the Oxford Arms to expand his waist line in front of a TV. (England 25 – Wales 21)

Five of us continued to join the Mortimer Trail, whilst everyone else tackled Herrock Hill (371 metres). Here they are, some of them following the ancient line of Offa's Dyke. We were puzzled by their desire to go over the top of the hill rather than follow the Offa’s Dyke path around the side of it… 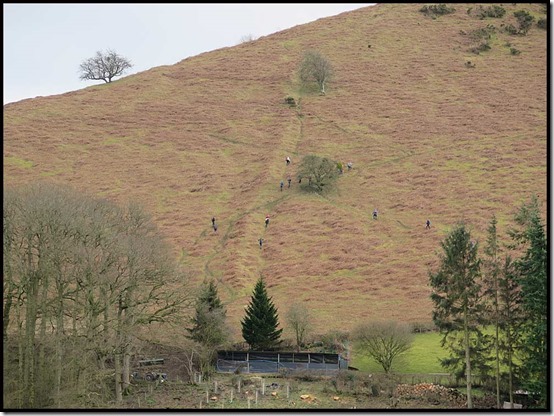 Our longer but more staid route passed this lovely half-timbered farmhouse at Knill. 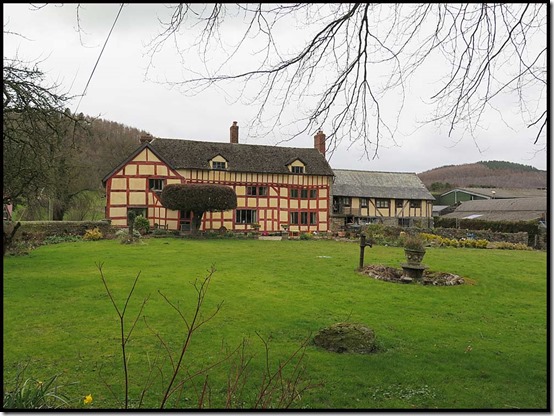 The path soon rose gently through pleasant woodland to the top of Little Brampton Scar, at the top of which we enjoyed a lovely stroll along the Mortimer Trail. The five of us decided to abandon Plan A (the long circuit via the Mortimer and the Herefordshire Trails) due to the many half hour breaks, and head back to Kington via Kennel Cottage, Rushock and Barton. It turned out to be an excellent and fairly quick route.

Here's what the twenty plus starters had been whittled down to - Martin, Ken, Edwina, Sue and Jon. Note that Sue had to stay with this group as I had her ‘supplies’, her rucksack having carelessly been left at home. Fortunately it didn’t rain, nor were her absent hat and gloves necessary. 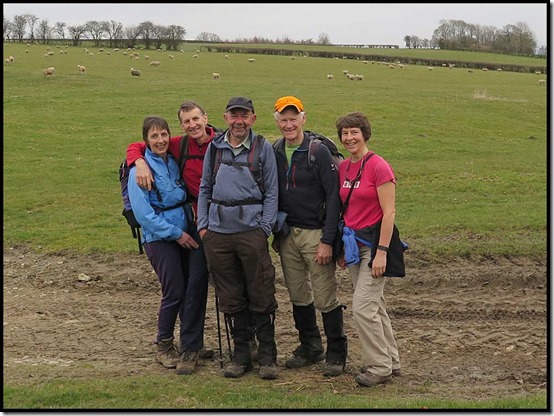 Beyond a very light coloured buzzard on a gatepost and some bare fields with sheep in poor condition, we found Kennel Cottage also to be in quite a poor state of repair, but was pleasantly surrounded by snowdrops.

We finished the walk about ten minutes after the Herrock Hill group, touching on the Offa’s Dyke path then taking an old tramway route through the town to reach the hostel with virtually no tarmac.

Despite recent rain, today's walk was on a consistently dry surface. Here's our route - 23 km, 700 metres ascent, taking 7 hours including about 10 hours of breaks. 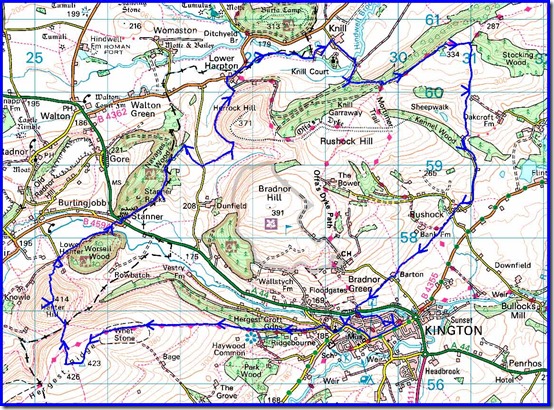 Sunday – after an enjoyable evening with superb food, capped by Richard and Jenny’s salmon with leek & mushrooms wrapped in puff pastry served with roasted veg, most of us assembled at the memorial in New Radnor for a modest Sunday stroll in the Radnor Forest, over the border in Wales. 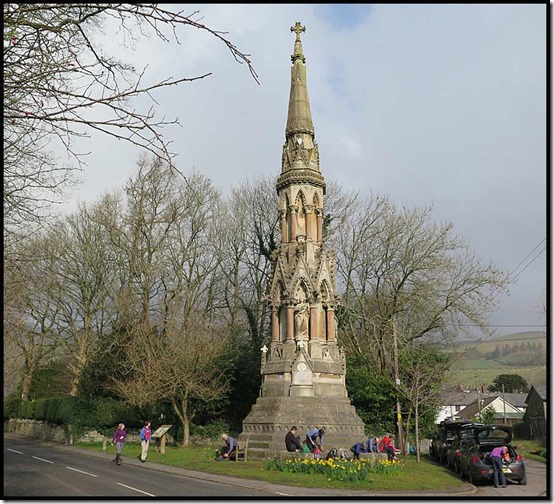 The 21 metre (77ft) recently restored memorial was erected in 1864 to commemorate Sir George Cornewall Lewis (1806-63), a barrister, politician, and man of letters whose family home was nearby. I wonder whether he enjoyed the luxury of a hot water system. From what I can find out about him I think he probably deserved the occasional hot bath.

Soon, around twenty of us were tramping up Mutton Dingle, with Hillhouse Farm standing out in an otherwise very hazy view. Closer to hand, Sue discovered the aftermath of a fatal accident. Out of consideration to my audience, I have decided not to show the maggot ridden skeleton of the deceased cyclist. 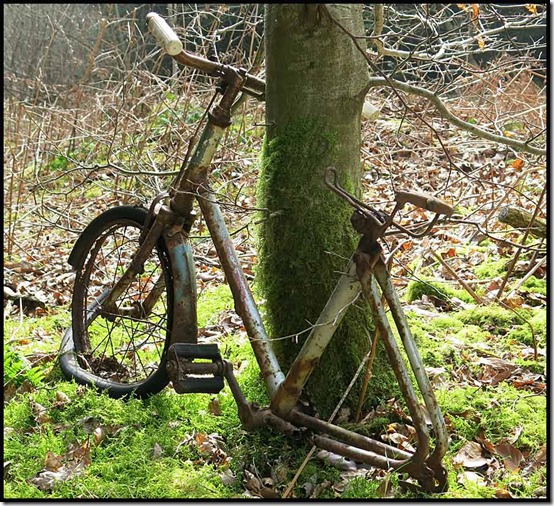 Near Whinyard Rocks we took a dogleg up to the 599 metre summit of Whimble. It was a lovely day, but views were very limited due to the haze. 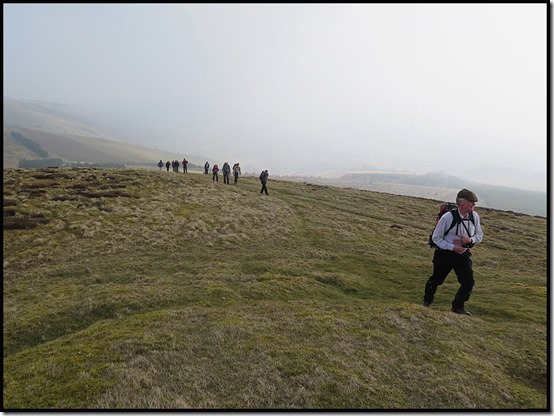 Then we wandered along to the 610 metre summit of Bache Hill, after which we continued to slowly gain height on the way to our next target, Black Mixen (650 metres), marked by a trig point next to a communications mast.

I’d followed a good track to the summit, whereas the others followed a shorter but much rougher, perhaps pathless, route.

Then they took another cross country route to reach the high point of the day, Great Rhos (660 metres), whereas my knees preferred to use the nearby tracks.

There were hazy views down Harley Dingle. 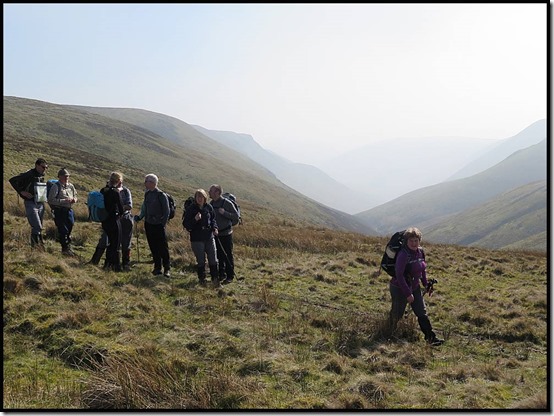 Phil found what he took to be a submarine; he chatted at length to the crew through the periscope. They told him they'd been blown off course. 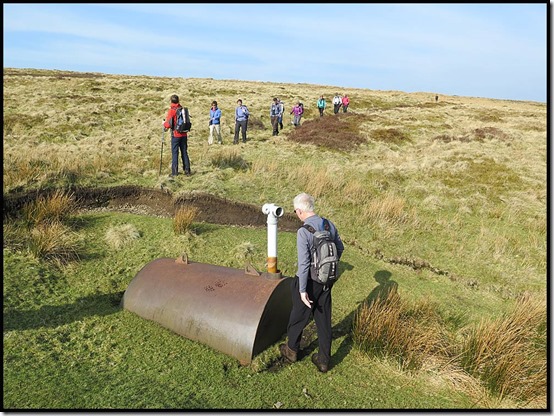 It was a steep and slithery descent to a Danger Sign that is marked on the Ordnance Survey map. Whimble is the distinctive hill on the right. 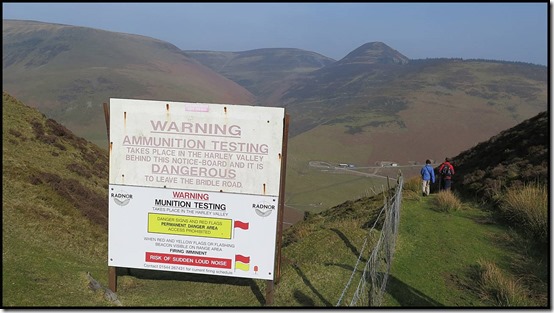 After a while, on a sunny afternoon in improving weather, we concluded the final descent to the ancient walled town of New Radnor. The roads seemed to be pretty much empty for most of our way home. 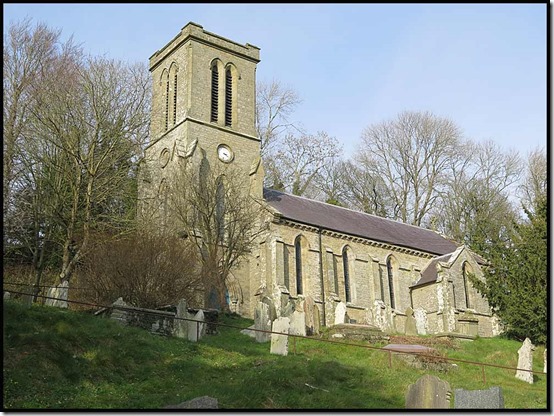 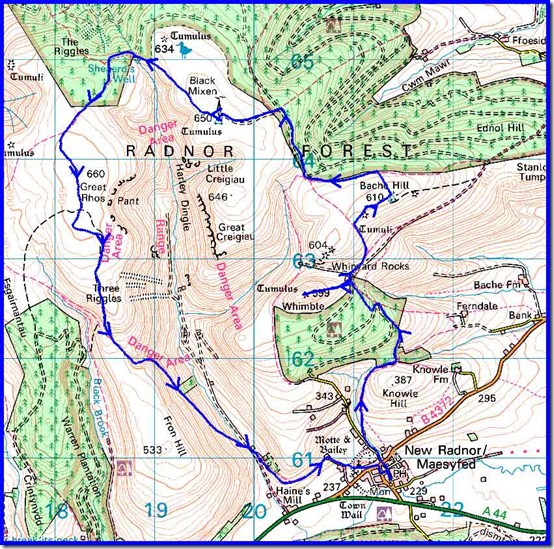 The ‘Marilyns’ we climbed were Hergest Ridge and Great Rhos.

* – Phil has a vivid imagination. He spotted the dog from a remote spot in the Black Mountains.**

** – whose imagination did I report as being vivid? My watch seems also to have accelerated a little during our breaks this weekend. No offence is intended to anyone who may perceive themselves to be victims of such minor exaggerations that may have crept into this story.

A beautiful part of the country - and you (we!) had lovely weather :-)

Yes JJ, and Timperley weather has been great. Apart from a cold northerly that you may have noticed, even in those lovely sheltered Shropshire lanes. I used to cycle to Ironbridge from home to go trainspotting when I was at junior school. A great spot.

Jenny - I hope readers have discerned/distinguished some of the more fictional parts of my report without allowing the untruths to upset them! And I hope you are feeling a little less tired. There is one picture in particular that you may prefer not to be made public... though you could of course attribute it to the effect of conversing with me.

A bit less tired thanks! I'm intrigued about the picture... am I sleeping during one of the 'half hour breaks'?! Don't make it public, but do email it to me, please.

Picture sent - you see what I mean?

I was listening with my eyes shut :-)