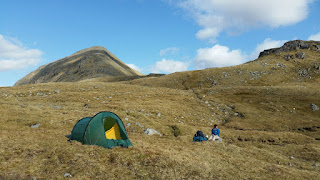 Route: more or less as planned

We were late down for breakfast. Most folk seemed keen to get off, but Brad and Roger joined us for a chat, and Humphrey was as garrulous as ever.

More shortbread was distributed, following which (once my new rucksack was packed and repacked) we ran out of excuses not to start.

Photos were taken, by the last people we saw before pitching camp seven hours later.

Bumbling about around Achintee, we eventually found the correct hill path. After a while it turned into a motorway next to a huge black tube, crawling up the hill like a giant anaconda. The construction workers who were engaged in the destruction of wild land and its conversion to an industrial landscape gave a friendly wave. Luckily there was nobody available from Mr Sloman's office to return a torrent of abuse. Hopefully the new road will blend in better when the work is complete and the debris is cleared.

Milkwort and cuckoo flower, common dog violet and yet to flower butterwort, all lined a narrow trod away from the new motorway that led gently via an excellent first brew stop, up to a broad col at 500 metres. Beyond this the path leads to a bothy. We turned off and contoured at around 470 metres. By now, thin gloves had been donned to combat the cool breeze. Some red deer disappeared round a corner, and apart from the tweet of the odd meadow pipit, silence ruled.

After oatcakes and tinned fish for lunch, we headed up to the Creag a' Chaorainn ridge. The weather was great. Cloud had risen from the high tops to provide fine views to Skye, Torridon and elsewhere. A short way along the broad ridge, we joined a stalkers path that led us gently to a minor summit at 805 metres. This spot afforded the best views of the day. We lingered, wallowing in the delight of viewing the Torridon hills in their full glory. Ben Eighe and Liathach were particularly distinctive in the middle distance.

The narrow but distinct path continued enjoyably along Sgurr na Feartaig's two kilometre ridge to its 862 metre summit. Then a steep descent above chasing black grouse found us at the end of our day's walk at Bealach Bhearnais. It was breezy at the bealach so we dropped south west for a couple of hundred metres to this calm spot by an embryonic stream.

We hadn't seen anyone since setting off from Strathcarron. Humphrey mistimed his arrival. Our tent was up but no brew had been initiated. Humphrey proudly produced his new gloves - £5 from Ikea. They are for 4 - fingered users. I offered to saw off a finger with one of my credit cards. Humphrey declined, produced the components of a drinking receptacle, and rushed off towards a cocktail party.

Richard Fuell's timing was much better. We were able to provide him with a mug of tea, after which he wandered off just a few metres to erect his microscopic tent and wrestle with a huge airbed.

By 7.30 we had enjoyed a lavish meal before the sun went down, suddenly producing a requirement to engage 'sleeping bag mode'. All we need to do now is brew some hot chocolate and get our heads down for a  good snooze. We won't close the door for a while as we have lovely views of Skye from here.

No phone signal, so it's anybody's guess when this posting will 'send'. Only one photo as the signal, if I get one, will be weak.

Confused about the gloves. The most people have 4 fingers and 1 thumb. Should you have typed for 5 finger users? Enjoy the walking.

The gloves had just four fingers. No thumb. £5 from Ikea. Unique Challenge gear. Picture to follow...