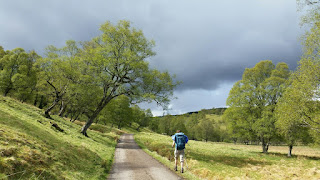 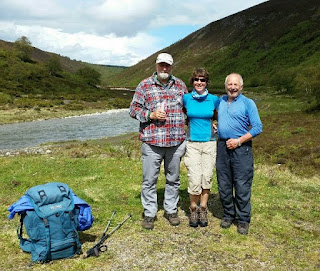 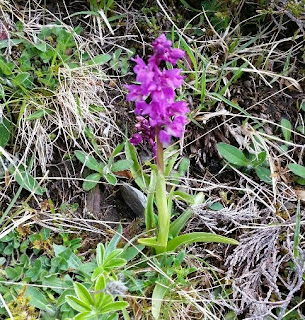 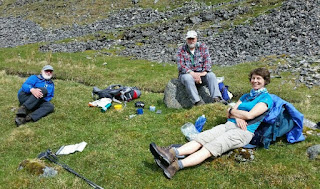 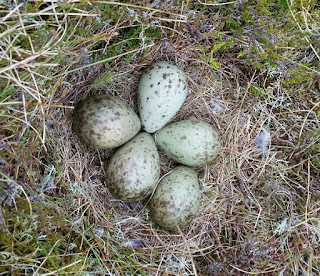 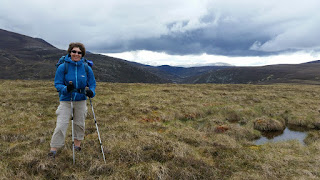 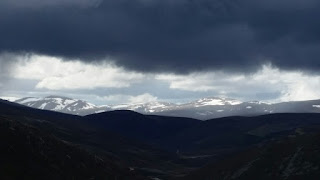 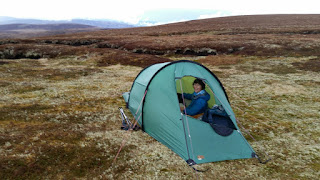 Morning rain was expected so we didn't rush away from Dianne's hospitality at Argyle Guest House. As it happened the rain arrived just as we left at 9.30. At least that meant we could don waterproofs indoors. She must have thought she'd never get rid of us.

The walk up Glen Avon beside the river was delightful, despite the showers. Queen Victoria's viewpoint (she visited in 1860) was afforded due respect. Pheasants cavorted in the fields between us and the river; wood anemones lined our route through verdant green woodland, and a group of over twenty walkers were seen being led over a bridge on a guided walk. The river, when we got close to it, looked crystal clear. Highland cattle munched, in time with the birdsong?

After a couple of hours we stopped for a brew by the Burn of Little Fergie. Having seen no Challengers since we passed through battle torn Culloden a few days ago we got quite a surprise when Sandy Millar strolled into view, and even more of a surprise when Tony Hewitt stumbled in behind him. It was great to 'commune', and the two of them kindly posed for a photo with Sue.

The next few kilometres were spent amiably with Tony, a stalwart of the Long Distance Walkers Association's Staffordshire Group. (He may even have founded it.) He stopped for one of his several lunches whilst we continued past orchids and pansies to an idyllic spot up the valley towards Lagganauld from the palatial pad at Inchrory. Tony joined us there and appreciated a brew (he's using non camping accommodation and has no stove). Sandy wandered past, then we were honoured by the appearance of John Burt, who I first met in Drumnadrochit on my first Challenge in 2007. He's an elusive soul, often being one of the last people to finish when most have gone home. He's also one of the few Challengers who sometimes dip into these pages, so if you are there, John, it was great to see you and we hope you enjoyed the rest of your walk.

After an hour's break and a brief interlude walking with John we left the 'sensible route' to Cock Bridge and headed up easy heather to the summit of Ruigh Speanan and on past a golden plover's nest (the picture indicates a design for a nest of four eggs, so perhaps the fifth was an afterthought; they were hot, so we quickly moved on) to the Well of Don. Distracted by an enormous double electric fence, we didn't locate the well. The fence seemed to follow the county boundary over Little Geal Charn and on to Meikle Geal Charn, where we left it and the boundary and headed up through clumps of small pink flowers (purple saxifrage I think), to Cairn Sawvie.

During the ascent to Well of Don another shower arrived. Not a shower this time. More like continuous rain with a thunderstorm mixed in. Not windy though, so we are very happy in this  flattish spot with a lichen mattress near the summit, just a few metres below the summit of Brown Cow Hill. There don't seem to be any cows here, but in truth we can't see much at all and are happy to settle down for a cosy night in the tent on what will be our fifth and last wild camp of this year's Challenge.

I walked past Queen Victoria's Viewpoint last Thursday, which was the day I would have gone up Brown Cow Hill, but in the miserable weather I decided to go for the quicker option of Cnap Chaochan Aitinn.
I would comment on the surroundings except that I didn't get to see much in the conditions!

Great pic of the dark clouds above the hills. Enjoy your last wild camp.

Thanks both of you. And we certainly did enjoy our last wild camp.