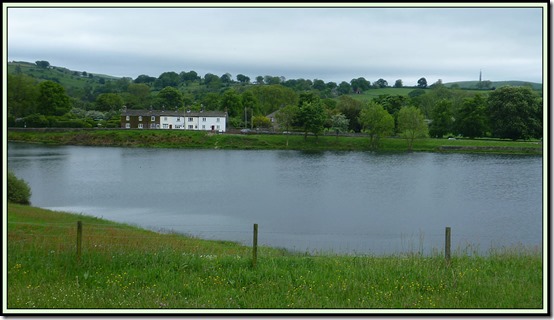 I’ve written about this bike ride before, going back to 2005, but I was surprised that my last visit was in 2014, so here’s an annotated pictorial story of today’s route. It’s surprising how at different times of the year, or simply on different visits, the eye is caught by different scenes that are absent from previous reports. Though some, such as landmarks like the Cat & Fiddle, usually feature.

I parked outside Trentabank Visitors Centre and started by zooming down past the Leathers Smithy pub and into Langley before heading beside Alan Roberts’ old house and up Holehouse Lane to a quiet spot between Teggsnose Reservoir and Bottoms Reservoir. The houses on Clarke Lane are seen the other side of Bottoms Reservoir (top photo).

Teggsnose Wood was delightful, despite the overcast day, with the last of the bluebells lining the path that leads to Clough House. 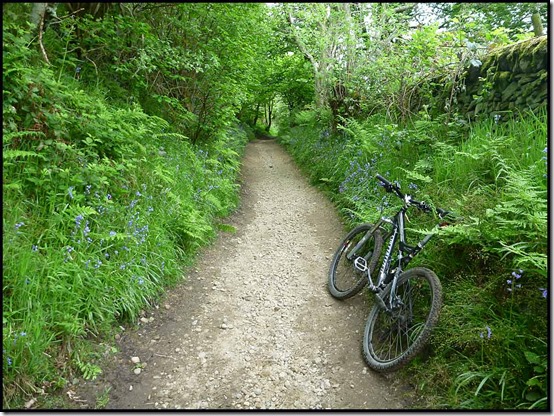 A steep pull leads to the main A837 road at Walkers Barn, where this ride enters the Peak District National Park, where it remains until exiting the Park at Nessit Hill. 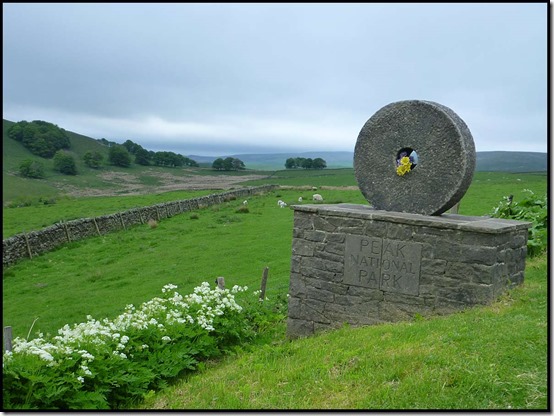 After a few metres of main road a right turn returns the rider or walker to the quiet solitude (on a Wednesday morning in June) of Charity Lane. 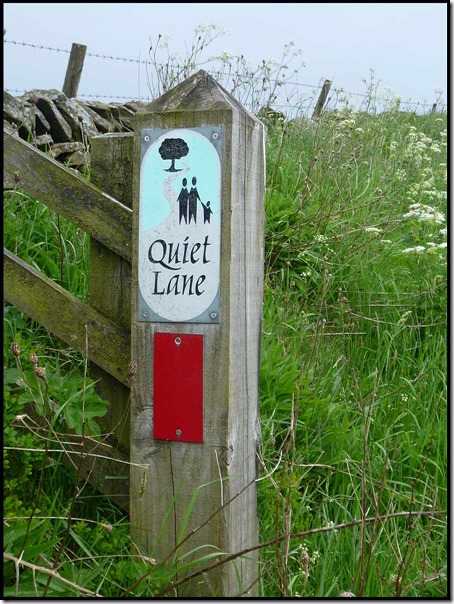 Once the tarmac is left behind, the lane becomes a superb mountain bike track that leads to a high point that is one of my favourite places. Today low cloud meant that the summit of Shining Tor and the buildings of the Cat & Fiddle were both hard to discern through the gloom. 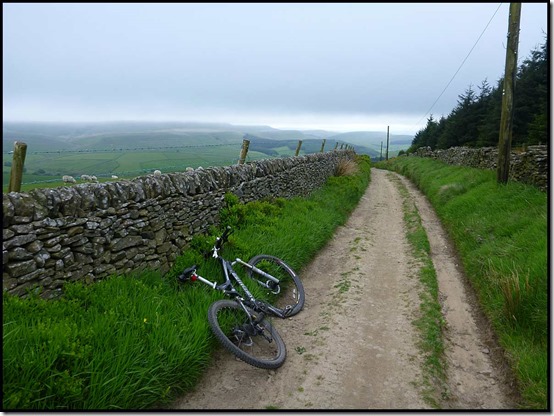 Forest Chapel was in use, for a funeral that would be adjourning to the Peak View Tearooms, just visible in the picture below after a tarmac ascent. 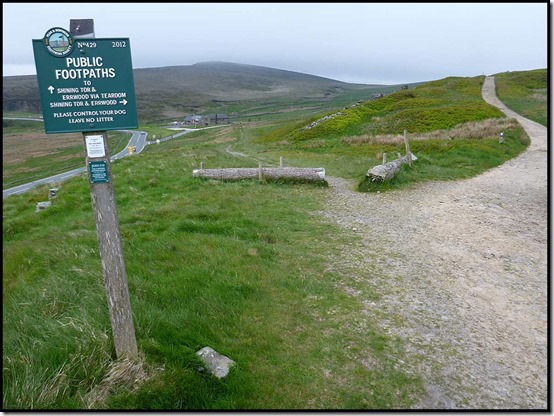 If you need sustenance just now, you need the tearooms (only open on certain days) as the Cat & Fiddle… 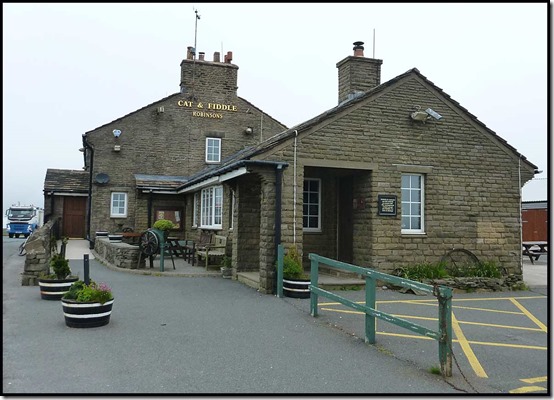 … is closed, and has been all this year.

Presumably the owners are waiting for someone suitable to contact them. 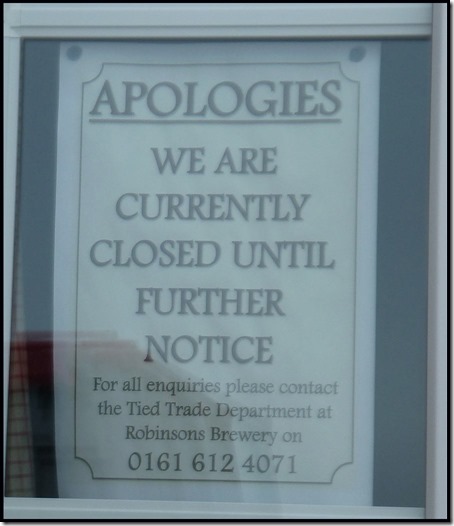 After that sad sight of the closure of the second highest hostelry in England, the cotton grass lined track past Danebower Hollow was a delight, especially as it brings back dark memories of a horribly boggy route before the path was re-built. 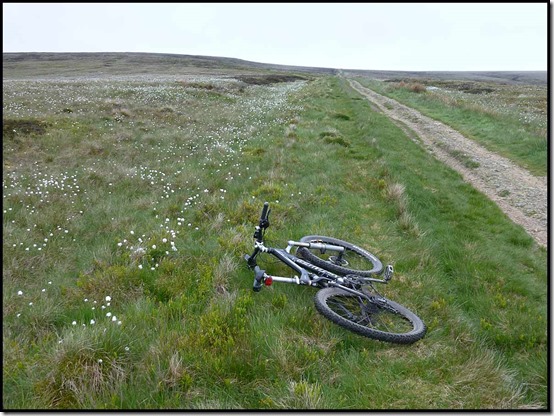 A kilometre or so along the main A54 road passed in just a few seconds as it was downhill with a brisk tailwind. I could nearly keep up with the motorised bikes!

The descent past Sparbent to Cumberland Clough, and onwards to the Wildboarclough road seems to get rockier every time I use it. It’s what some may describe as a ‘technical descent’. Great fun.

Here are two pictures taken near the path junction at SJ 997 699, where I paused to despatch a pint of tea and some chocolate before tackling some of the bigger boulders and a stream crossing further down the clough. 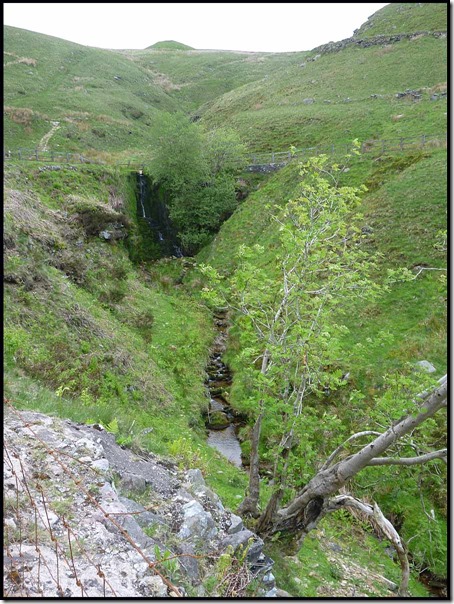 The rocks get bigger. You have to divert your eyes from Shutlingsloe (on the right in the picture below), or risk disaster! 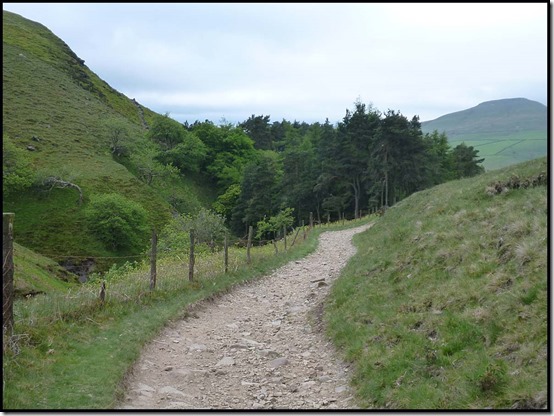 Once in the valley, beside Clough Brook, I was astonished to see how green everything looked today, even under dark clouds. 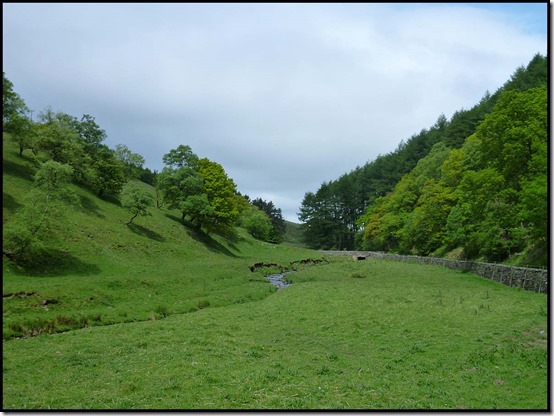 My usual route up a steep lane was blocked, but the tarmac via Bottom o’th Oven and Forest Lodge was much more gentle on the thighs. I think I’ll use it in future although it does turn the ‘circuit’ into a ‘figure of eight’ shape. 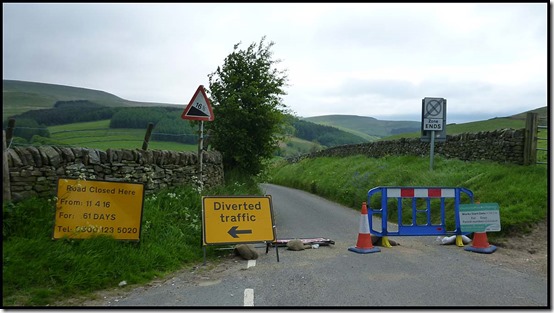 The views within Macclesfield Forest, with Trentabank Reservoir in the picture below, seem to be continually changing as forest management dictates harvesting and replacement of the trees. I’m sure this is much greener than when I’ve been here before. 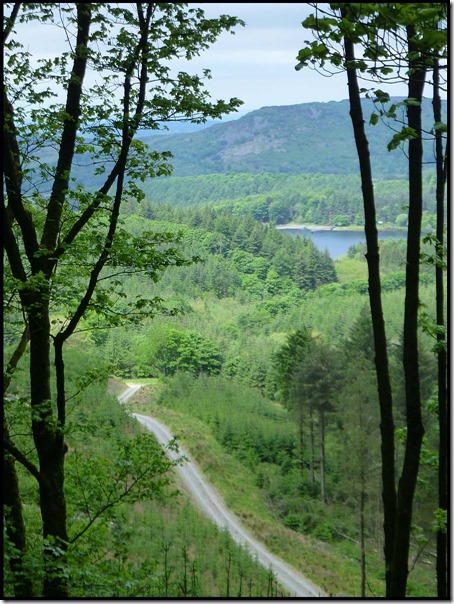 All too soon the National Park is left behind, Nessit Hill is summited after a sharp ascent, and here there don’t seem to be any regulations preventing the installation of sparkling new benches with fine views towards Tegg’s Nose and away over Greater Manchester. 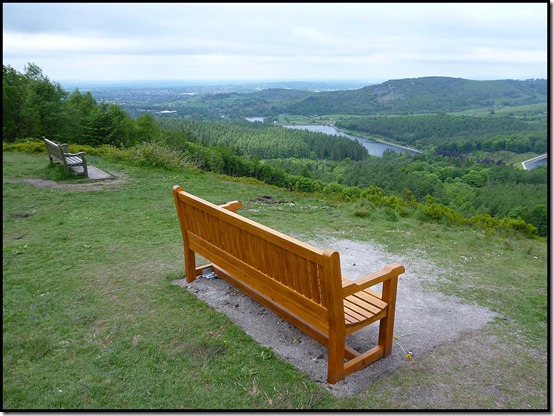 On this occasion I took a steep descent route marked for bikes – slightly shorter than the old route on which pedestrians may have felt terrorised by fast paced mountain bikes. The path I took was deserted, so no such problem today.

The 23 km with 800 metres ascent took me 2 hours 50 minutes (moving time 2.10). A most enjoyable morning’s outing that substituted for a planned walk for which nobody turned up at the allotted time at the Visitor Centre. Luckily my bike was in the car, or this would have been a (solo) walk report. 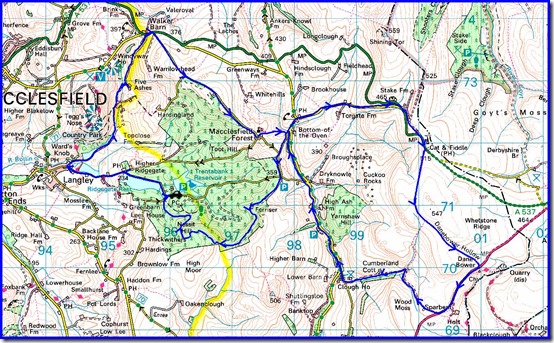