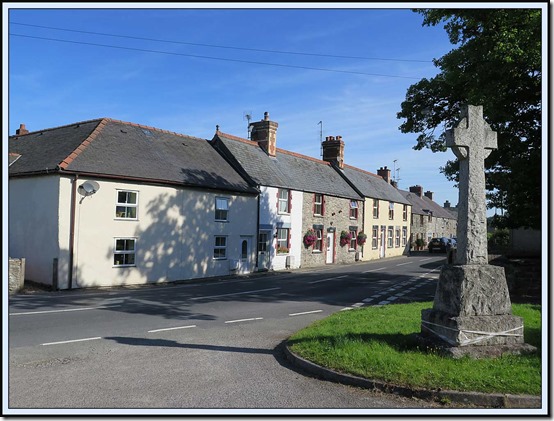 ‘140319CadairBerwyn.arf’ - a route I planned back in 2014! This week’s superb weather meant I didn’t even need to put waterproofs or a fleece into the car!

An hour and a half from Timperley, Llandrillo is a good starting point for a walk over the Berwyns. There's a free car park and toilets next to the playground in the centre of the village.

My walk started off past the war memorial and followed the Tegid Way, an eighteen mile walk from Bala to Cynwyd, for the first 6 km.

It's a nice view west from the rising track, despite the wind turbines. 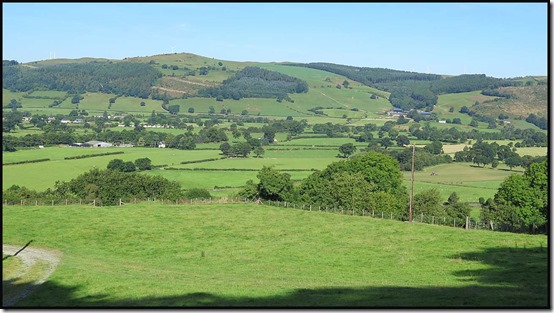 Summer is now well on, as shown by loads of bright red berries on the trees lining the track.

It was a gradual ascent up a rough track. Once above the trees, the heather (ling) was in full bloom, as I looked past scurrying sheep towards the Berwyn summits. 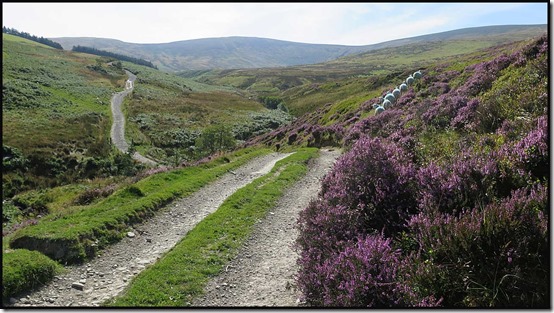 It was a t-shirt day, but there was a cool breeze – so whilst I was happy to have left my fleece at home, a light windproof top did prove useful.

After 6 km the Tegid Way turned sharp left and my path joined a route used by 4WD vehicles. At the top of the pass, at about 550 metres, there's a memorial to 'Wayfarer' and there’s a box containing logbooks and other items for the 4WD ers, for whom this may be a high point. I wonder who was responsible for all the litter around here? – lots of banana skins and toilet paper (I didn’t dare look under the stones)! 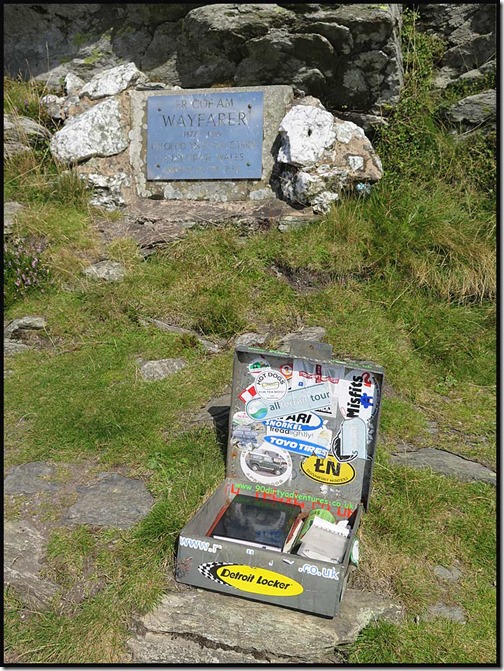 At the memorial my path turned right and abandoned firm surfaces for most of the rest of the day. A small cairn pointed the way to the Berwyn summits, the first of which was the north east top of Cadair Bronwen. The summit of Cadair Bronwen was topped by a large cairn with fine views beyond Bala towards Snowdonia. 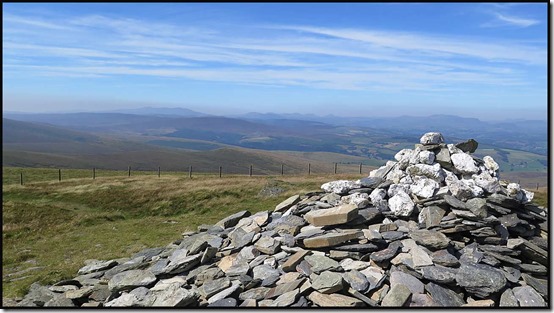 The route towards Cadair Berwyn continued over the boardwalk shown below, dropping to Bwlch Maen Gwynedd, from where an obvious contouring path led to the 742 metre summit of Tomle. 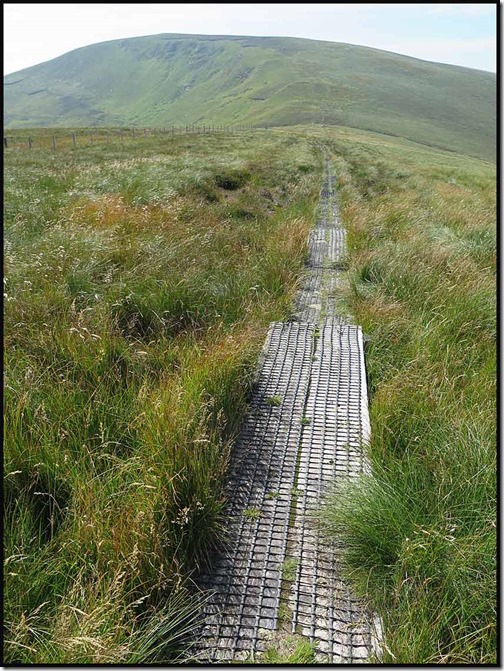 Whilst contouring, I could admire the excellent view down the Llawenog valley, but soon I was passing new fencing on the top of Tomle as I looked ahead to Foel Wen, a 691 metre outlier on which I enjoyed some lunch. 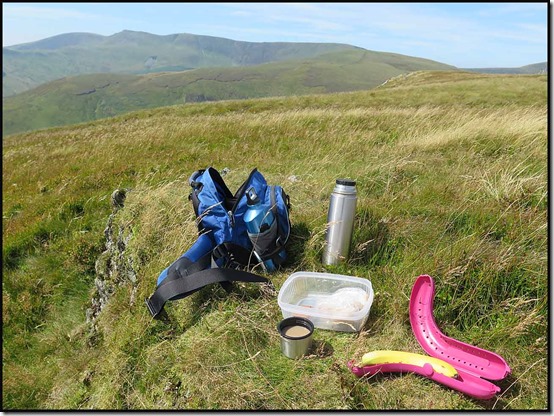 Returning to the summit of Tomle, there were constant good views towards Cadair Berwyn. 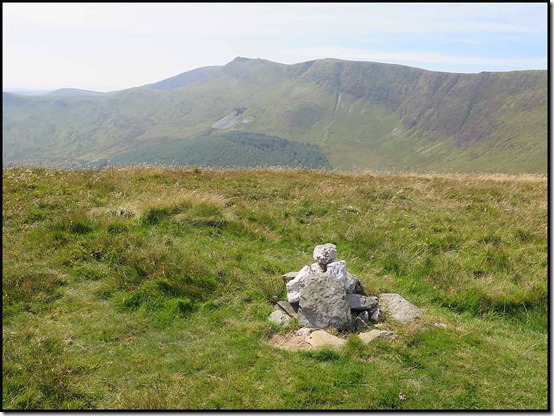 There were superb views down to Blaen-y-cwm and along the broad summit ridge. There’s a trig point at the north top of Cadair Berwyn, seen here looking towards the main summit. 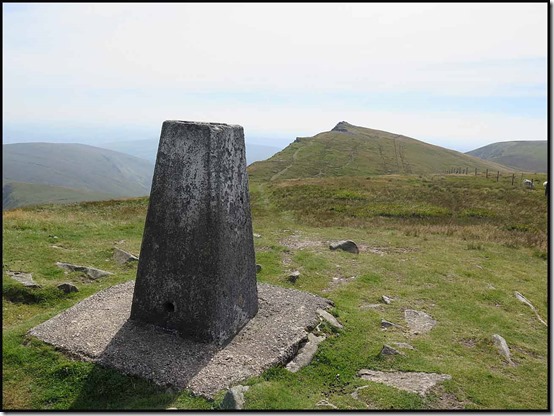 There’s a massive windbreak on Cadair Berwyn - not needed today. Distant views were hazy in the heat, but there was a good view looking down to Llyn Lluncaws from Cadair Berwyn, and across to Moel Sych. Moel Sych was apparently once considered to be the higher point – and the highest in Denbighshire – but whilst both tops are thought to be 827 metres, Cadair Berwyn is now considered higher. 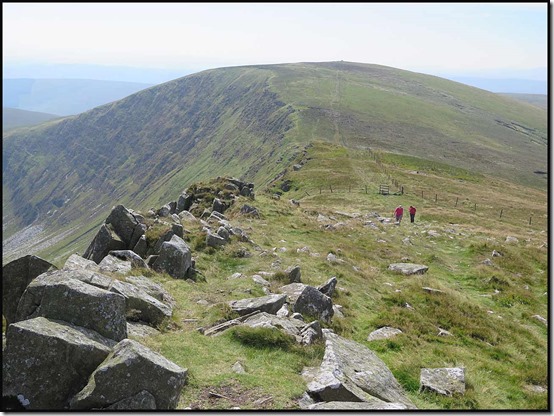 By now I’d met five people on the summits, but nobody else was seen until I reached the valley near Llandrillo.

A vague path path led me to a cairn at SJ 040 309, from where a yomp over very rough ground led to a wall/fence at SJ 037 316. Following the wall to a steep, rough track was nearly as rough. A couple of gates had to be hurdled on the private track to Rhyd-y-Gethin, where a ford was crossed in order to by-pass a route through somebody’s garden. On the descent the temperature rose considerably, and with the thistles now sporting seed heads it felt like a late summer heatwave had arrived. 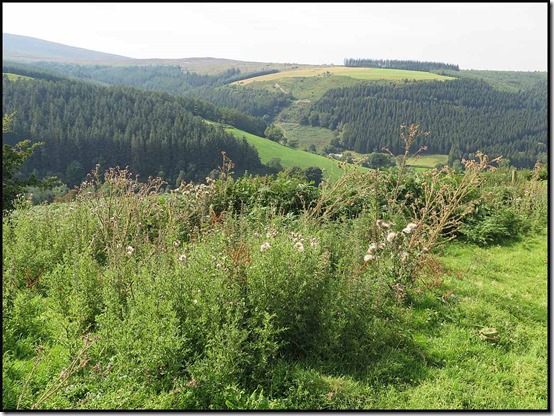 Three buzzards and a kite squealed overhead, with lots more buzzards scrambling from trees when I passed by.

I made the mistake of following an off-road route into Llandrillo. Whilst the gates and stiles were present, the actual paths bore a resemblance to jungle terrain – really tough to negotiate.

Eventually I muscled my way through the undergrowth to reach the village, and luckily the post office had a fridge full of cold drinks. Here's my route - 29 km with 1220 metres of ascent, taking a little under 7 hours at a brisk pace (Naismith would have taken nearly 8 hours). 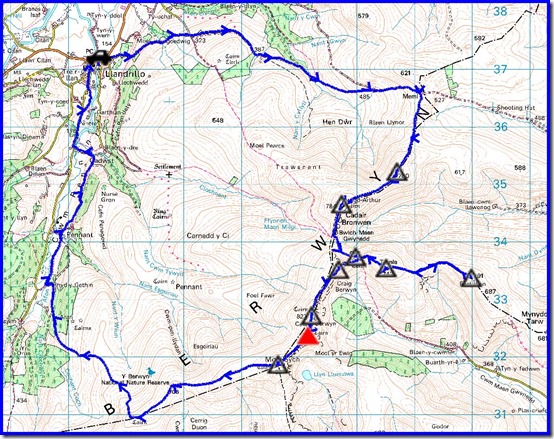 An excellent day out – and a great choice of day as it was pretty dry underfoot. It looked as if it could be wet after rain.

I wish I had done it with you. I didn't think you would have been alone.

I'd have told you, but it was a very late decision and a quick pace due to a late start, so easier to go alone. You wouldn't have enjoyed the jungle section!

Or the pace, but there are escape routes.

Yes Alan, there are a couple of alternative 'return' options that might avoid the tussocks and the jungle...