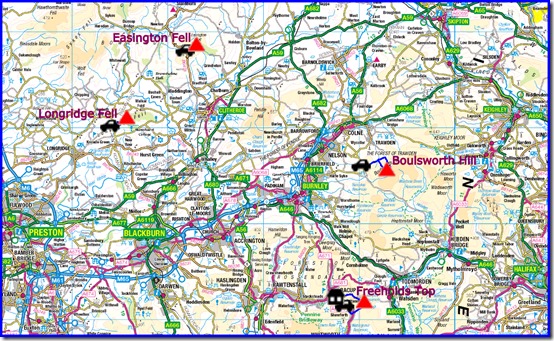 I was planning on joining the LDWA Plodders for a short walk near Settle, but a glance at Region 36 of The Relative Hills of Britain book sold to me by Alan Dawson a few years ago revealed four hills that I hadn’t recently (or in some cases ‘ever’) been up.

This would provide a bit more exercise than the ‘plod’. A quick check on AA driving times and Naismith formula walking times revealed that the round trip should take about 10.5 hours. 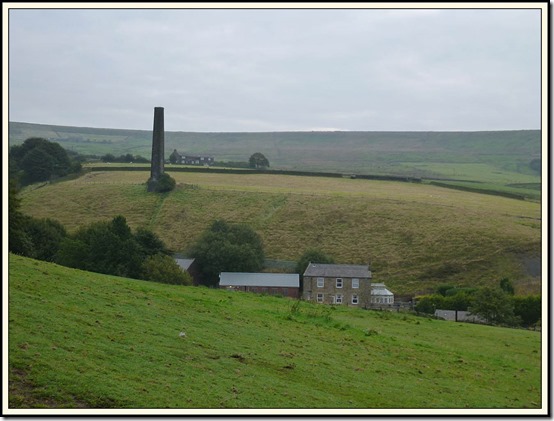 An 8.30 start from Timperley took me around a surprisingly quiet M60 motorway and up the M66 to Bacup. The parking spot at Trough Gate was an ideal starting point. A high road to Shawforth afforded goods views across to my objective on the right of the skyline in the above picture. It was warm but overcast, breezy above 300 metres, and it stayed that way all day. So the walks could be done in trainers, carrying just a windproof jacket as a precaution. It wasn’t needed.

The farmer at Winterbutt Lee helpfully guided me through his farmyard. “There are footpaths through all the farms in the area except that one”, he said, pointing across the valley towards Cowm Top. But the footpaths are poorly marked in this area, and I soon found myself the wrong side of the wall after Middle Trough. The path was soon regained and led easily to the summit, where a trig point lurked behind a pond. 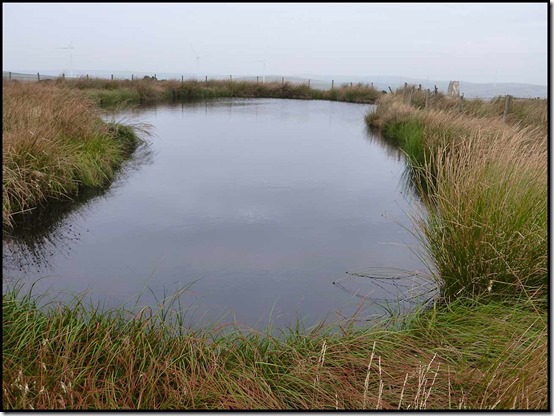 I followed the crest of the ridge for a while, heading towards Limer’s Gate and past one of the many wind farms that have sprung up in this area. 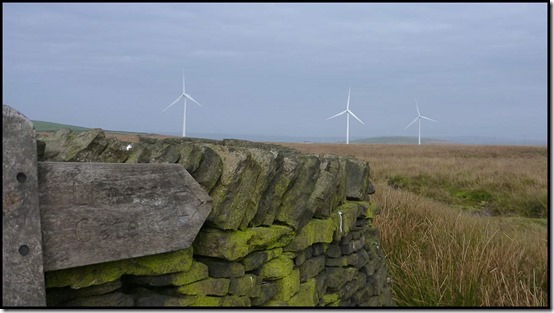 I planned to drop down to Dry Corner Farm and descend to Britannia via Higher Hogshead. Dry Corner Farm was a mess. Luckily I’m not afraid of dogs. A sign warned that they might bite me. A resident disappeared inside the dilapidated hovel. The dogs were noisy but friendly. I couldn’t find the path, so I made a quick exit down a driveway. There was lots of debris, as indicated below. Can you see the remains of a boat, stranded high on the moor!? 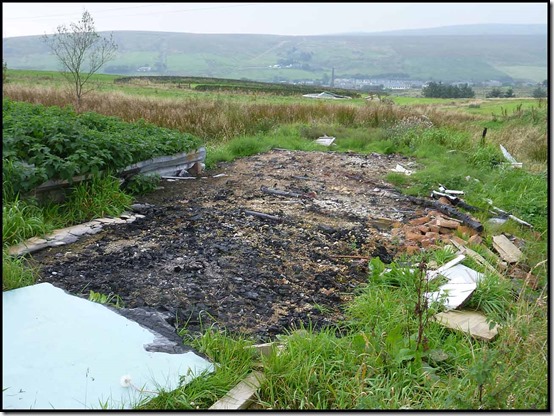 I took the easy option and headed on down past some private roads. Suddenly, things looked familiar. I was on Tong Lane. This is where I take Oscar for a walk when visiting my daughter. I passed a few metres from her house!

A gentle jog took me through the posh houses of Britannia and back to Trough Gate for a welcome cuppa, happily ahead of schedule despite the longer than expected route - 9 km, with 240 metres ascent, taking 1 hour 40 minutes. 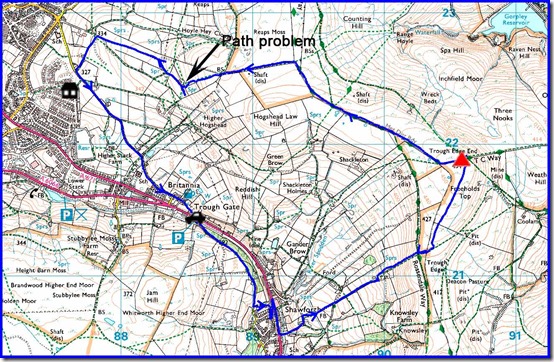 Parking at the roadside next to the Coldwell Reservoirs set me up for an easy stroll along the Pendle Way/Pennine Bridleway footpaths, past a couple of elderly ladies as far as Will Moor Clough. A stone marker point with a faded cap, pictured below, signified the start of a permissive path to the summit. 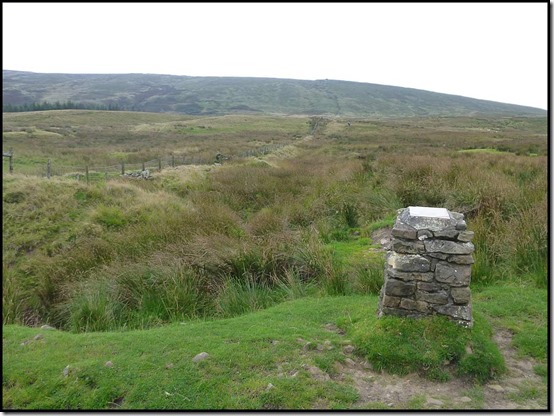 It was boggy. Difficult to keep feet dry in trainers, but I managed it, hopping past two elderly gents on the way. They seemed to have lost the knack of crossing peaty groughs whilst maintaining dry feet. There was a discernible path to the 517 metre summit, marked again by a trig point. 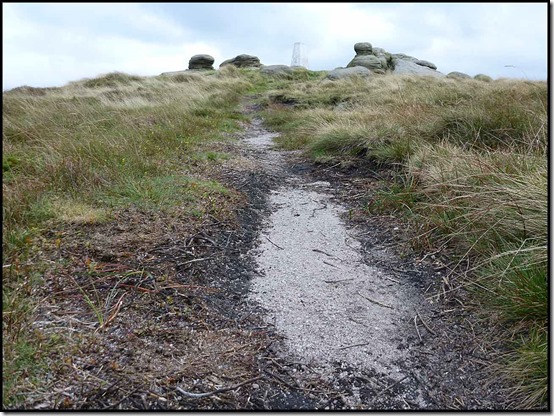 Despite the overcast day, the views were reasonable. Some nearby rocks, shown below, looked higher, so I visited them. They were lower. 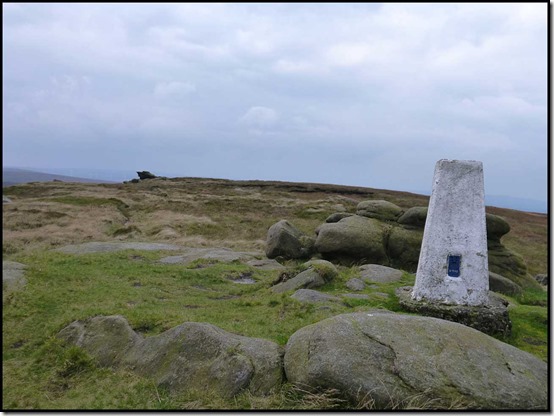 A self timed picture was attempted. Unlike Gayle, who also gets up to this sort of caper, I don’t have a selfie stick. The wind blew my camera off the trig point, so I propped it up at the bottom of the plinth. First attempt: headless, second attempt: legless, third attempt: try sitting down, that’s better! 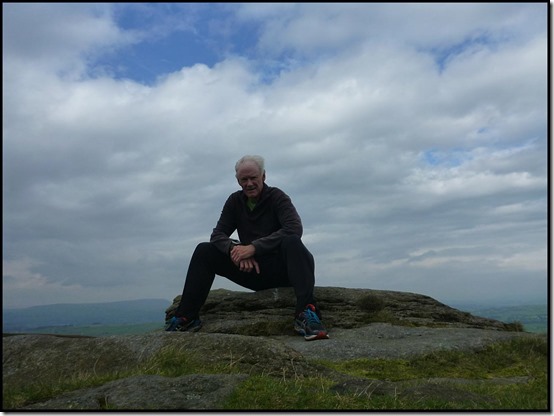 I continued along the crest of the ridge for a while, with good views across to Pendle Hill, before attempting to find the permissive path leading down to Lumb Laithe Farm. This proved tricky, and I never really located it. The tussocky descent was undertaken with great care; this was ‘knee wrecking’ country. 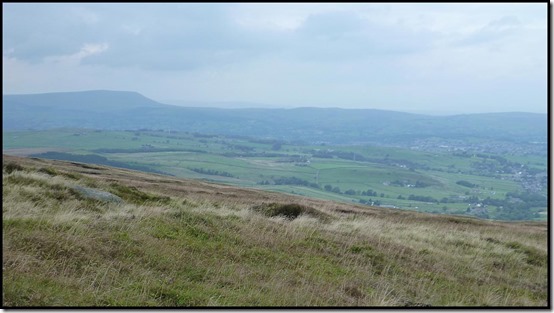 Once back on the bridleway, a speedy return to the car past various groups of walkers ensured that I was still well ahead of schedule and could pause for a while to enjoy lunch and another cuppa. 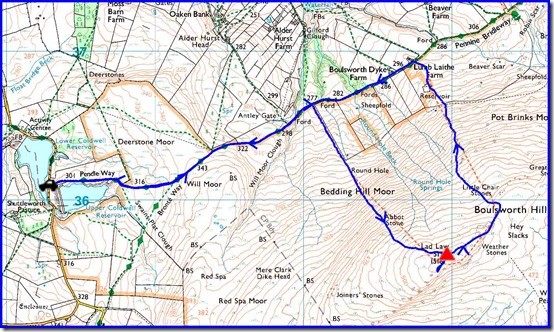 A roundabout route via Slaidburn exposed the inefficiencies of doing this sort of trip with just a 1:250000 road map and a 1:25000 map on the phone. Eventually I reached a lay-by opposite a quarry at Butts Gray Stones on the B6478.

The summit of Easington Fell looked quite close. It’s just to the left of the trees… 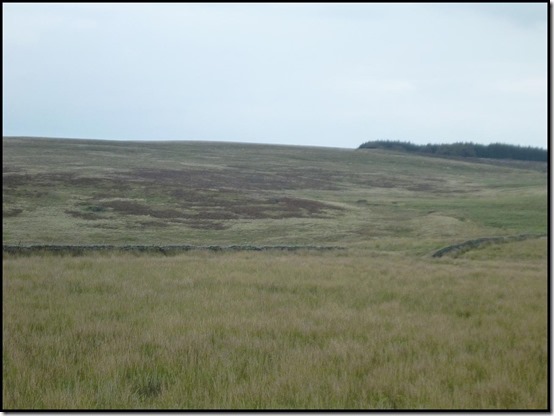 An easy path led to the summit in just a few minutes. Looking back, nearby Waddington Fell looked higher. I’m assured that it isn’t (until Jon Metcalf and Alan Dawson do a ‘heightings survey’ anyway) but if I’d known it was so close I’d have gone up Waddington Fell as well. 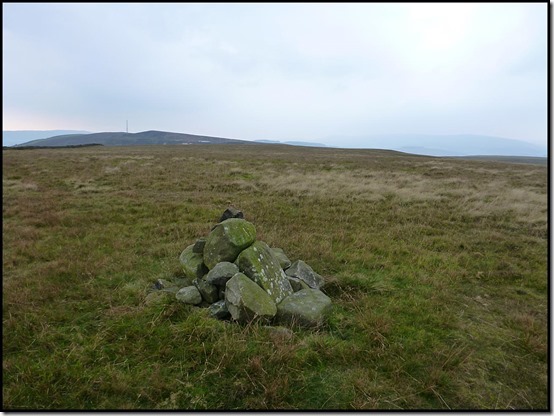 I propped the camera on the rocks and took another self-timed picture. A jogger ran past. It looks as if I’m trying to hitch a lift with him. 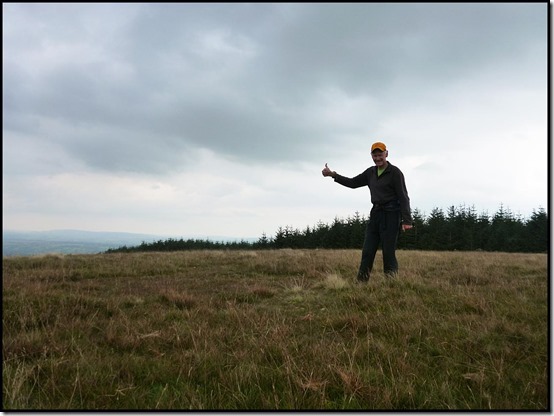 I made this walk into a circular route by following the jogger down a path to the north of the parish boundary that was marked with engraved stones like this one. 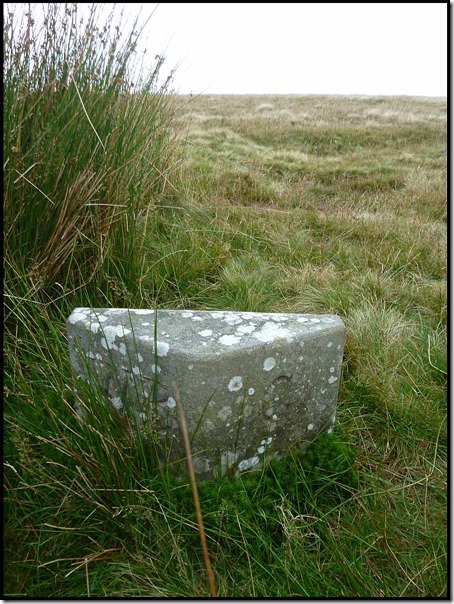 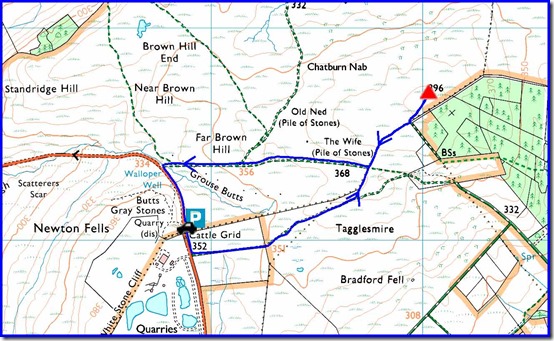 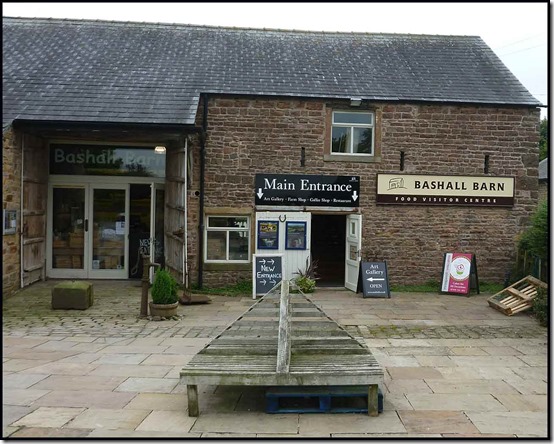 From the parking place by Cardwell House, there’s a view to the corner of a wood. When you reach that you know you are half way to Spire Hill, the highest point on Longridge Fell. 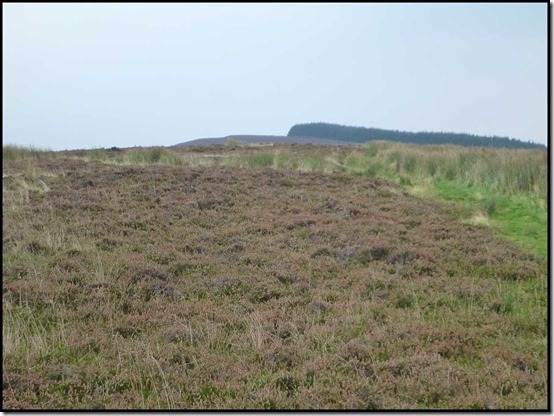 A group of runners was leaving the parking spot at the same time as me. They took a slightly different route, their local knowledge favouring a ‘dry line’ whilst I was bog-hopping again. They kept stopping to wait for their slowest member. That enabled me to keep up and enjoy a chat at the summit. The guy on the right is a teacher, taking his students on a Wednesday afternoon run. They were enjoying being out on the fells. 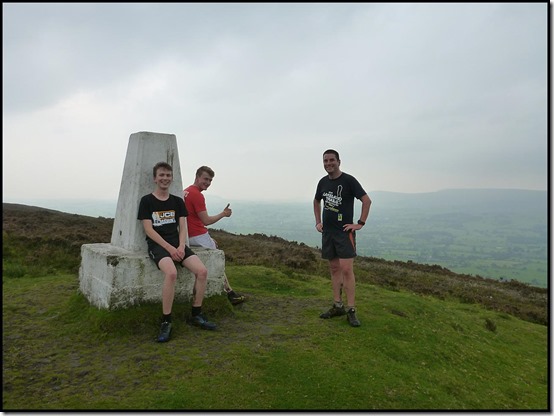 To make this a circular route, I continued along the skyline path to High Beacon, where a right turn then another unmarked right turn took me down a sort of fire break, pictured below, towards some fallen trees and a very rough section. 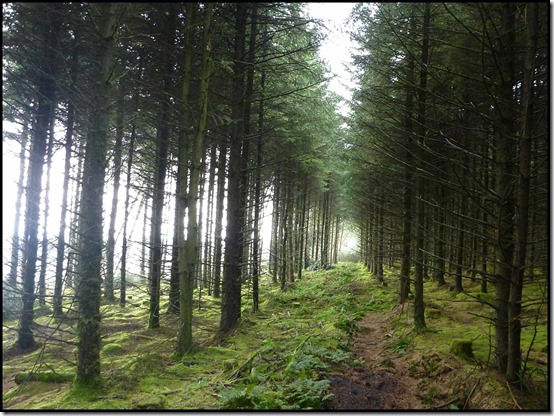 The skyline path was regained and followed all the way back to the road, where a final short climb led over a rise and down to the car, where all remaining ‘edibles’ (apart from supper) were stomached, and the flask was drained.

This final stroll of the day amounted to 5 km, with 110 metres ascent, and took a shade under 50 minutes. 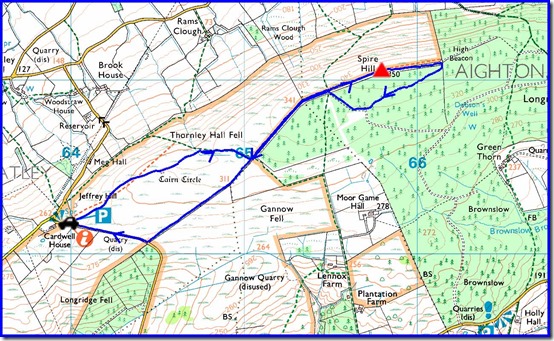 An excellent day out.

All familiar to me but not all done in one hit like that. Well done. Are you getting the Marilyn bug as well? Gayle seems to be incurably affected.

I use the list of Marilyns as a means of 'going somewhere different, although obviously I've been up some of them many times. I do a few new ones every year...

Several of my walking friends have over 1000 Marilyns to their names. I'm nowhere near that.

This little foursome worked well as I'm trying to build up a bit of stamina for the Toulouse Marathon without getting injured, though I could easily have come to grief on the tussocky descent from Boulsworth Hill. It was nice to be able to keep up with the joggers on the last hill.

I expect you are glad you are back home given today's rain!

I don't have a selfie stick! I simply have a hand which I use, at arms length, to operate the camera. I do believe you have all of the necessary equipment to achieve the same. (And, if you use the forward facing camera on the phone, you can even see what you're photographing, rather than needing to use trial and error.)

Welcome to Lancashire. There is much more to explore!

Thanks Gayle. You know I'm a bit dim!

Bowland - Despite living in Cheshire I do enjoy Lancashire and I spend quite a bit of time with East Lancs LDWA, but the closest they get to a proper hill is usually Billinge! I may have misled readers by omitting in the first sentence of this posting the fact that these were the ONLY four hills in Section 36 that I hadn't been up recently (or ever)!

On other matters, has Conrad been able to enrol you as his room mate for the last weekend in October? I do hope so.

Wow I've actually done all those. Freeholds being the most recent. I didn't do them in one day though. In fact not even in the same year.