This was another weekend for my ‘Pyrenean Friends’ and a few others deserving a treat, based at Collett’s lovely B&B in Leyburn in the Yorkshire Dales.

Sadly, some of last year’s participants were unable to come, but it was great to have Humphrey and Mary along – Humphrey’s efforts in producing my two ‘Pyrenees Adventure’ books being the inspiration for the weekend – and Mike and Marian, who are regularly so hospitable to us in Patterdale.

We are pictured above outside Eastfield Lodge on Sunday morning.

We had assembled there on Friday night. I’d cooked a fish pie and a couple of lasagne dishes that I thought would be more than enough. How embarrassing – I invited Henry Collett to join us, but the food ran out so he had to resort to his frozen reserves. Sorry Henry!

On Saturday, twelve out of our party of sixteen drove to Redmire for a 21 km stroll via Castle Bolton, Hazel Bank and Aysgarth, whilst Ali O had a day recovering from a stressful week, and Humphrey, Mary and Marian enjoyed a tour of some local racing stables.

The overcast day wasn't good for photography, so the pictures are very much ‘for the record’ with no attempt at ‘artistry’. At least it was calm and warm, excellent for walking. 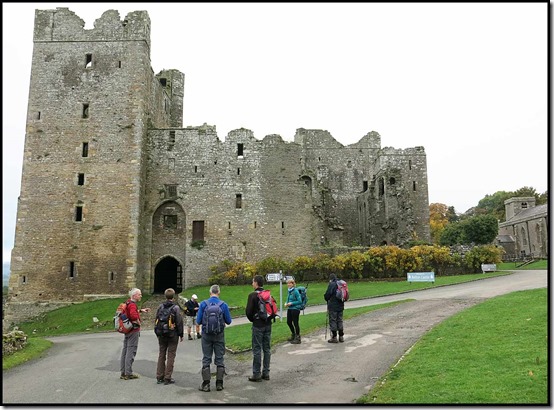 Bolton Castle, in Castle Bolton, dates from C14. Mary, Queen of Scots, spent six months here in 1568 before being transferred to Tutbury in Staffordshire.

We headed along the excellent path past Ellerlands Edge below Carperby Moor. 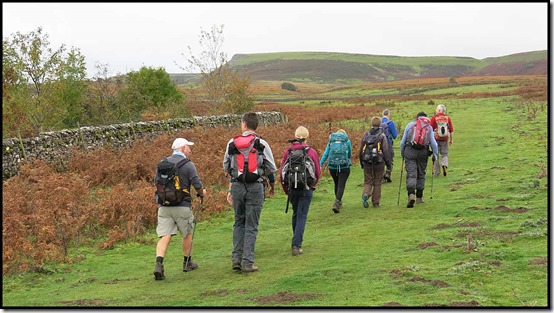 After passing a lead mining area, we strode on, towards Hazel Bank and a pretty waterfall. 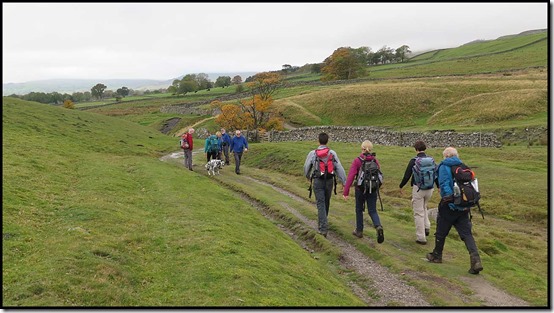 Beyond Hazel Bank we headed towards Aysgarth. Sue found a relic. 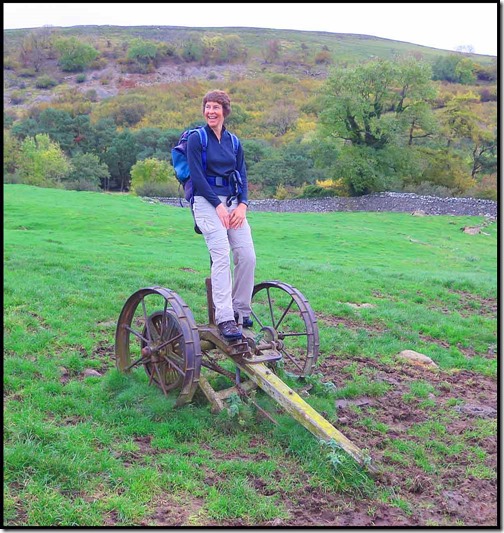 These Fordsons would soon be needed... 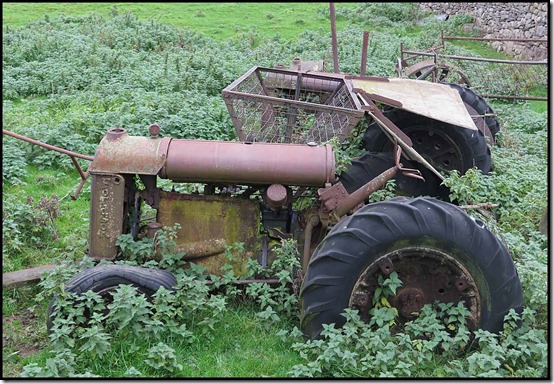 We crossed the River Ure and enjoyed lunch on a bank by the river.

Beyond Aysgarth, a good path led to the Falls. 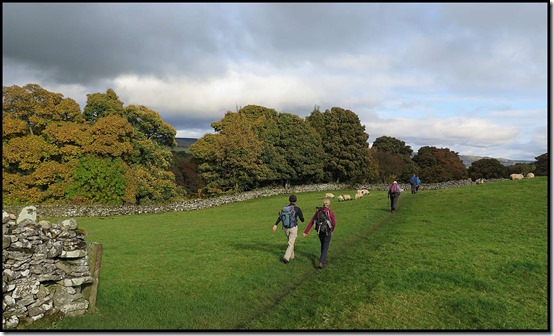 En route we found a campervan stuck in a grassy field. Here's where we needed the Fordsons. 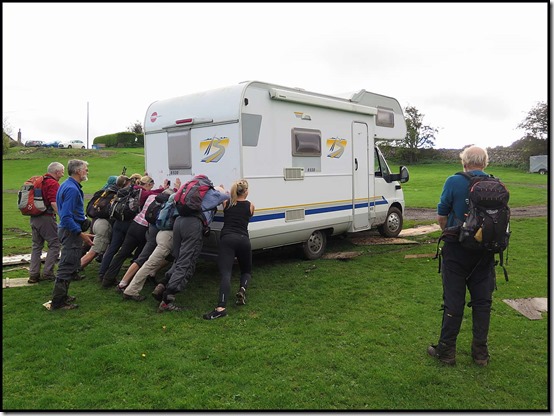 That was the closest we got, then the vehicle went backwards, almost reaching a fence.

Aysgarth Falls were not exactly ‘in spate’. Here are the Upper Falls, in need of a bit more frost and sunlight to brighten the spectacle. 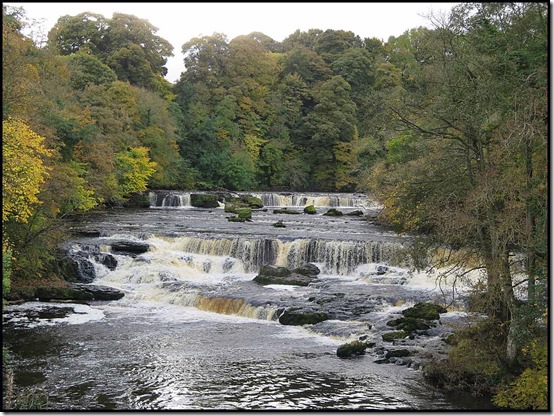 Beyond the Middle Falls ‘Three Wise Men and Gayle’ were found sitting on a bench discussing the essentials of walking for the elderly. “Never pass a bench.” said the chap on the left. “Or a toilet” added Graham. 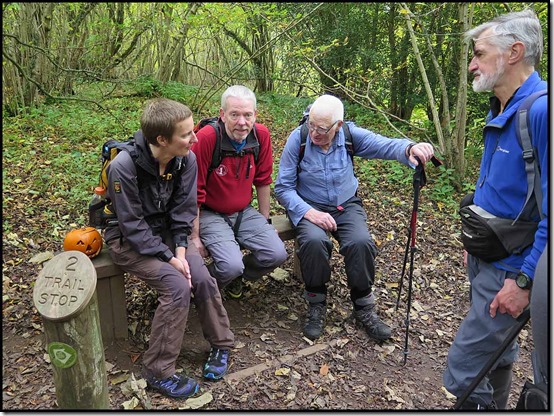 This chap looked on… “Are you sure you are on the right path, Graham?” 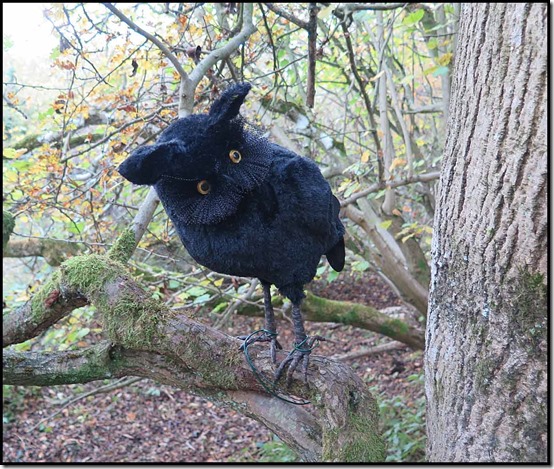 These two were so busy snarling at each other that they’d missed their lunch. 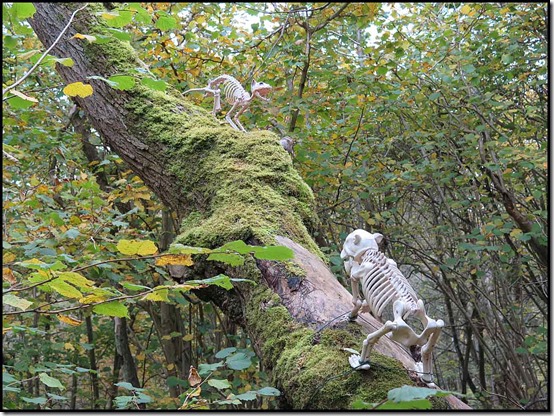 The Lower Falls – whilst Mick wandered above the abyss debating whether or not to take a bath, I attempted a picture of some rose hips. 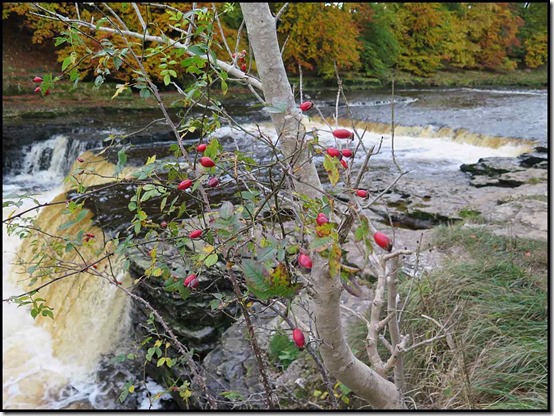 Almost back at Redmire, a crossing of Apedale Beck offered alternatives to hopping across the rocks, in that Graham attempted to swim across (“I gave it my best shot” he said later, rubbing his knee) and Alan and Sheila found a place deep enough to wade across. 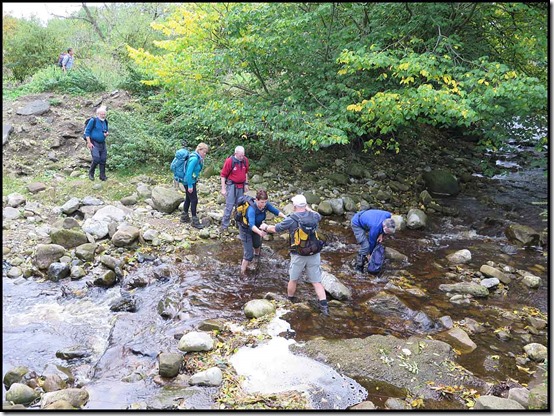 Others sought an alternative involving trespassing over a private bridge. Cheats.

Soon we were back at Redmire, risking the dangers of crossing the railway line before returning safely to the station car park. (We’d have used the train if the times had been more convenient.) 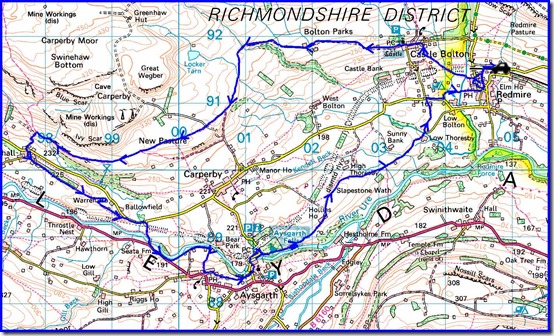 Then we adjourned for tea and cake (excellent, thanks Moira), some laptop based slideshows (‘Graffiti’ and ‘TGOC’), some photo books (very interesting, Humphrey) followed by a nice meal at Thirteen.

Then I think some tasks for the future were handed to intoxicated victims. If true, this will become apparent in due course!

Sunday morning - Ali and Sue escaped the group photo as they needed to head back to Newtonmore to prepare for an important ‘draw’ for places in the 2017 TGO Challenge. 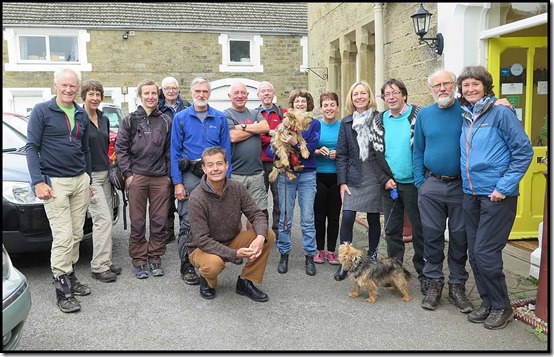 By the time various others had headed off due to commitments or injuries (Humphrey had bravely managed the trip despite recently breaking his leg), eight of us embarked on an anticlockwise circuit via Middleham.

We started off towards Wensley, passing a rather grey looking Wensley Church on another grey overcast day. But as we crossed the River Ure again, we could appreciate the warm, calm day, on which it was a delight to be able to slump into a warm heap for elevenses near the top of Middleham Low Moor.

Mick spotted a drone? Others puzzled over its location. 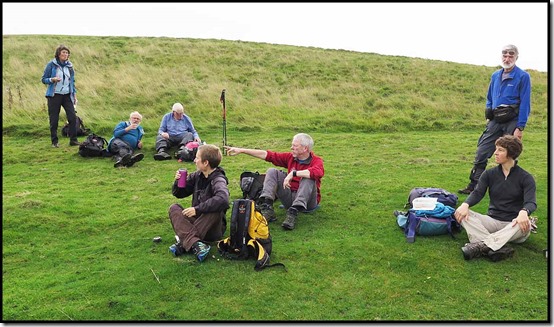 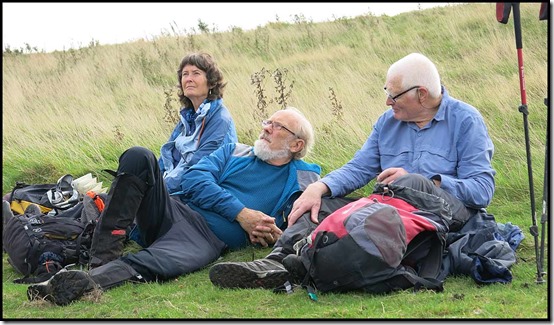 The golden eagle/drone/whatever moved on, leaving us with this pleasant view across the valley to Leyburn.

We were soon on the ‘gallops’ used by the racehorses for training. Several members of our own party had galloped past before I could capture the moment, eventually reaching a trig point at 236 metres before the grassy descent towards Middleham. 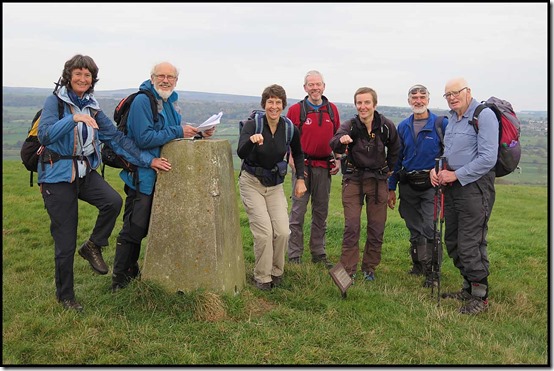 This Shaggy Ink Cap would have been tasty in its youth. Other mushrooms were picked. They smelt and felt lovely to eat, but after consultation with our mushroom guru (Heather T-S), we decided they would be great for our compost despite the minimal risk of eating them… 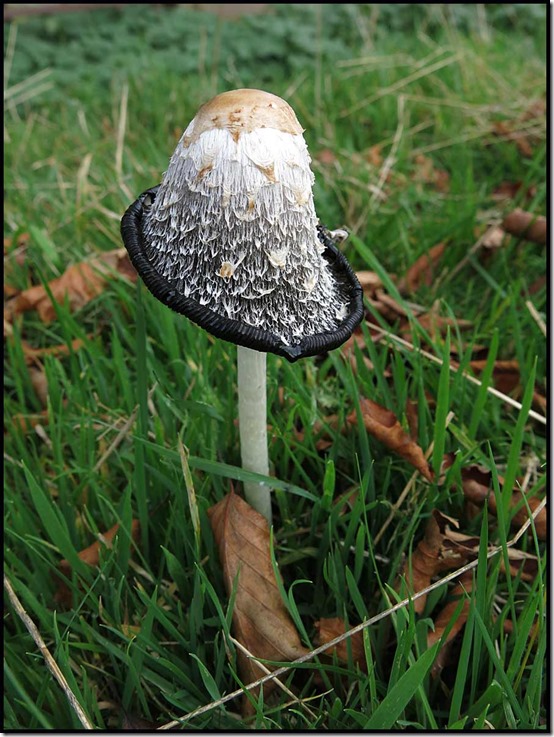 Middleham sports a castle dating from 1190, when it replaced an earlier structure. It fell into disuse and disrepair in the 17th century, but before that it was a most impressive and grand residence. 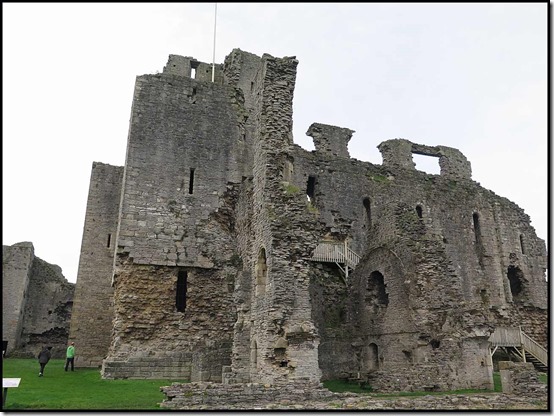 Middleham is a nice village in the centre of a number of horse racing yards, with an excellent tea room outside which it was most pleasant to enjoy lunch on the warm October day. Mick and Gayle had rushed off to iron some of Mick’s shirts, so they sadly missed this delight. 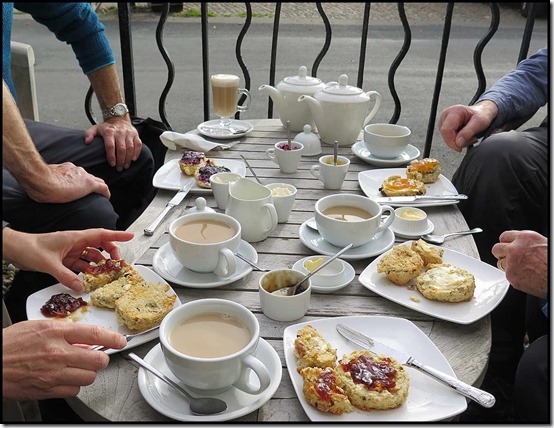 Field paths then led to our fourth and final crossing of the River Ure, over the castellated Middleham Bridge, and the return to Leyburn via pleasant field paths. 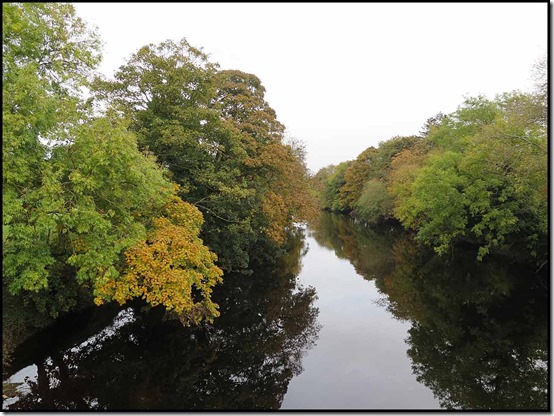 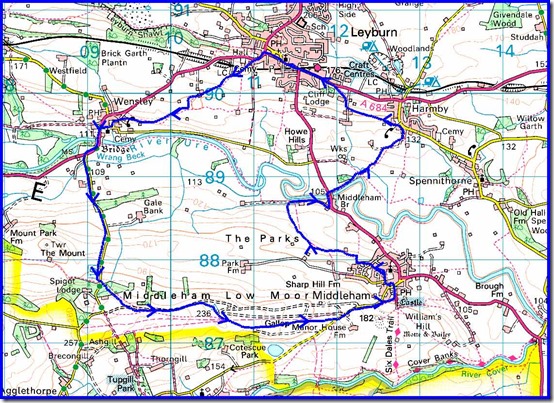 We were back at Eastfield Lodge by about 2.30. Conrad abandoned his poles and we all went home.

There’s a slideshow (58 images) here. The dreaded Google slideshow again – try clicking on the first image. There are captions, but Google may choose to conceal them from you.

That was a lovely weekend. Sue and I hope everyone enjoyed it as much as we did. Thanks again for coming.

It was an excellent weekend; thank you for inviting us.

Looking at the photo of scones and tea, I'm sorry that we missed that, although I'm also happy that we weren't any later home.

Loving the insertion of Ali and Sue into the first photo. If you squint enough (and were ignorant of their true heights) you could almost believe they were really present for the photo call!

Thanks Martin, we had a great time. Wonderful place to stay as well.
Levitating Ali and Sue, marvellous. Time went so fast i couldn't believe it was time to leave.

Brilliant weekend - thanks Martin and Sue.

I understand my poles are on their way bac to me.

Thanks All. Facebook seems to have been briefly illuminated by my poor attempt at Photoshop in the header picture. The problem was that there was nowhere to fit Ali and Sue at full size due to the boundaries of the image. I suppose I could have just placed their heads at the back, but I decided miniaturisation was the best option. I do hope they are not upset. If so they can easily seek revenge by manipulating some of the TGOC pics I am about to upload for them!

The image is actually in the spirit of the weekend - a very jolly occasion.

Many, many thanks to you for a lovely weekend, great company and fixing the dry calm weather for us all. You are welcome back to Patterdale any time!

Thanks Marian, it really was a great pleasure to have such excellent company for the weekend. Given the current weather, you may see me sooner than you think!

Mick has been trying to leave a comment, but is having technical issues (i.e. it keeps disappearing when he hits 'Publish'), so I'm now acting as his secretary. He says:

"Hi Martin! Thanks for a great weekend with superb company. As for me spotting something interesting, it wasn't a drone, it was in fact a rare raptor called a Conrad's Flask. You can ask Sue for further details."

I also have trouble posting comments unless I'm signed in to Google and using Chrome, which I have to open specially to make comments. But if I comment using my Android phone it sends two or three identical comments, leaving me and presumably any other recipients the hassle of deleting the extra ones. So I don't comment much when on a trip, especially on other blogs, for fear of being (even more!) annoying by sending multiple messages. Technology - wonderful, isn't it?