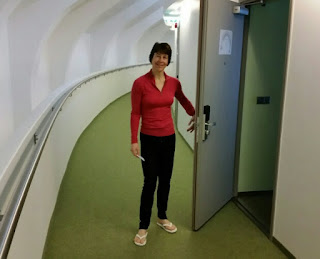 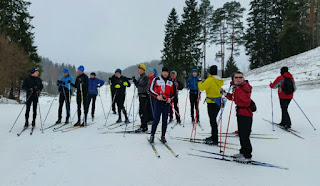 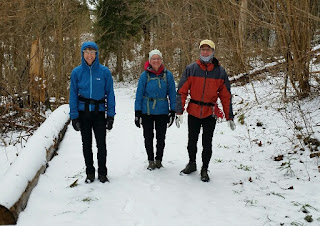 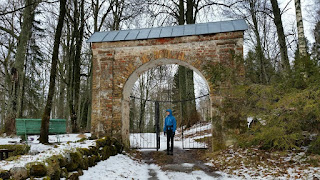 Today was spent in the village of Otepää.
We are staying in the Tehvandi Hotel, known to the locals as the Pentagon, which forms part of Tehvandi Sports Centre. The hotel is horseshoe shaped, with a grass roof.
The centre (pictures to follow in due course) was built in 1978 as a complex for preparing the winter sports team of the former Soviet Union. It continues to serve that function for the Estonian team and is a venue for World Cup skiing events, some of which have taken place here in recent days.
Currently it has a 6 km classic cross country ski trail on artificial snow, enhanced by a few centimetres of the real stuff that fell overnight. This morning we had a group tutorial from a chap called Marti, before skiing slowly around the easy 6 km trail. My GPS recorded about 10 km of skiing. The second picture shows some of our group milling about whilst waiting for Godot.
Returning to the hotel (a 100 metre walk) I slipped on some ice. Very careless - it hurt my already damaged shoulder. So this afternoon Sue and I skipped skiing - there are only so many times you can enjoy skiing the same 6 km of track - and went for a walk with Susan (who is crocked by virtue of a calf muscle strain) and Roy around the periphery of the ski trails. About 8.5 km for me, more for the others who after coffee and cake at a nice café headed off to explore a local fort.
The bottom two pictures were taken on this pleasant stroll, the bottom one being at the entrance to a large cemetery.
Posted by Phreerunner at 14:44

Sorry to hear about the shoulder Martin but you will soon get over it. Didn't recognise Sue in Red, she's always in blue. Ha.