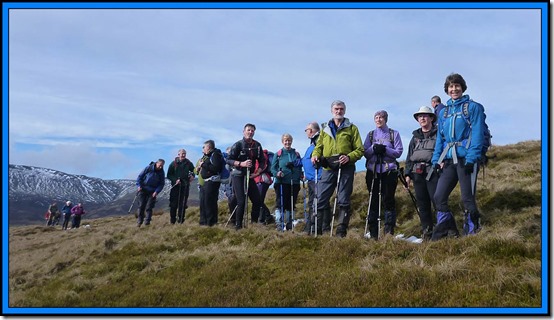 About 30 Challengers attended this annual reunion, of whom roughly 22 enrolled on Graham's Saturday walk. He had chosen an excellent route.

After leaving the Snake Inn at 10 am prompt, we were soon stretching our legs on the woodland path up to the Roman Road, which we quickly deserted in favour of the path above Oyster Clough.

From this excellent rising path, pictured below, there were good views towards the Ladybower area. 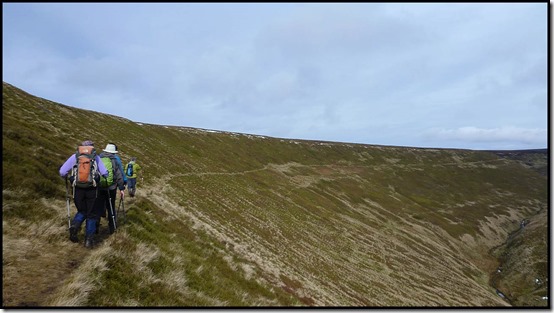 We passed a shooting cabin; very basic, not really usable as a bothy, but it would provide shelter in an emergency. Today it simply served as a marker whereby we turned south east towards Cowms Rocks.

Here are two Grahams and David, looking back to the rising path, with Seal Edge and the Kinder plateau in the background. 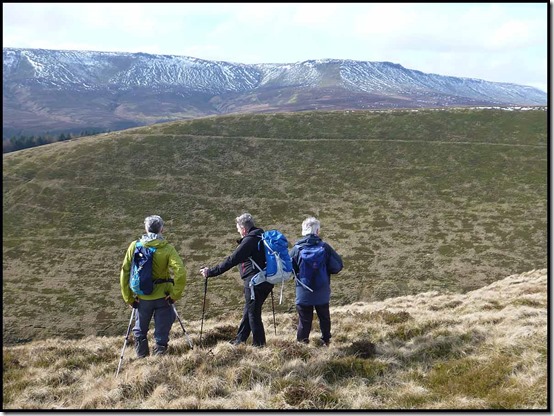 The group was still intact despite Graham's electric pace, from which he was eventually reined in for an elevenses break on Hey Ridge. 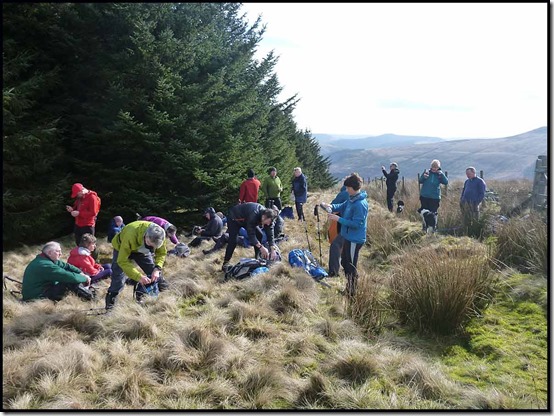 Then a lumpy descent led down through a break in the plantation created by an ancient wall, to the Alport Farms. 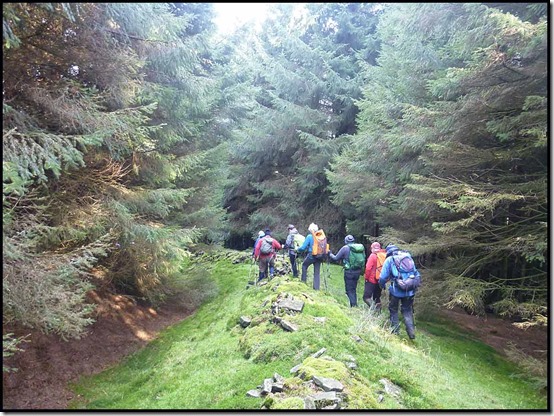 From the farms, Alport Castles stand tall to the east, with The Tower in the relative foreground and good views up the Alport Valley for added interest.

We used a bridge, not the ford pictured below! 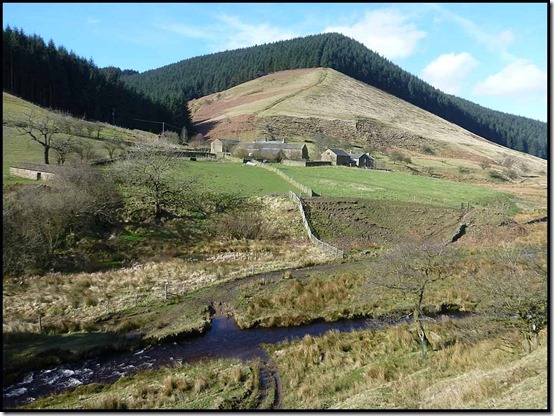 Soon we were on a subsidiary ridge with fine views. 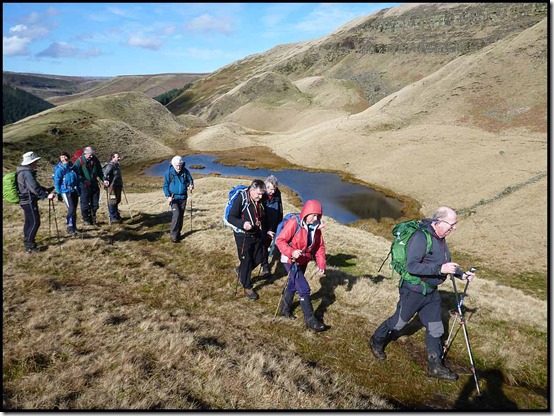 The rocky summit of The Tower looks higher than it actually is from this ridge.

A few people followed Graham up to The Tower, pictured below, but most lunched amongst the rocks far below. 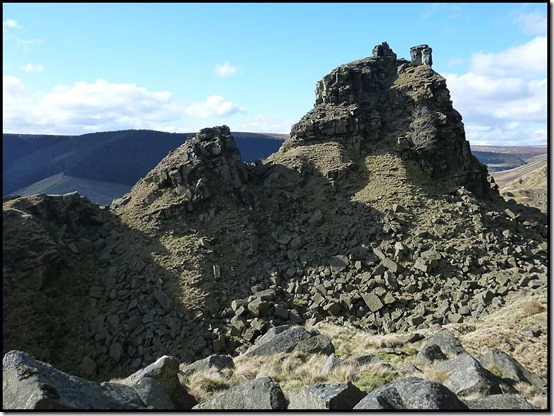 From here, there's a gently ascending ramp that emerges by the excellent path across Rowlee Pasture, from where there’s a good view back down the ramp to The Tower.

By the time I reached the Rowlee Pasture path there were only 8 in the group. Others had elected to go on ahead of the leader and had taken a short cut back to the Snake via the Alport valley.

Here we are on the flagged path across Rowlee Pasture. 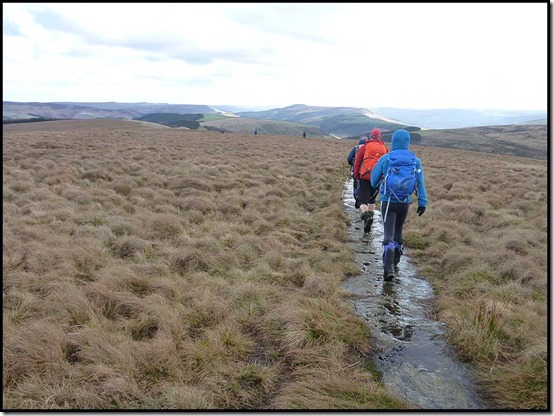 What a contrast to last year (except that Sue is dressed identically), when our walk followed the same section of path. 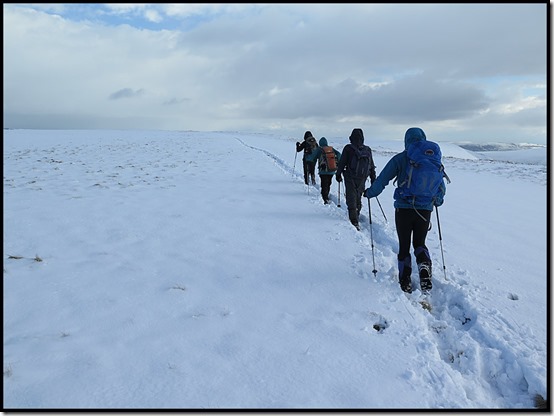 After losing two more of our number at Woodcock Coppice (from where there was an easy walk back to the Snake), a residual group of six headed across the A57 and up a good bridleway through the well named Woodlands Valley. 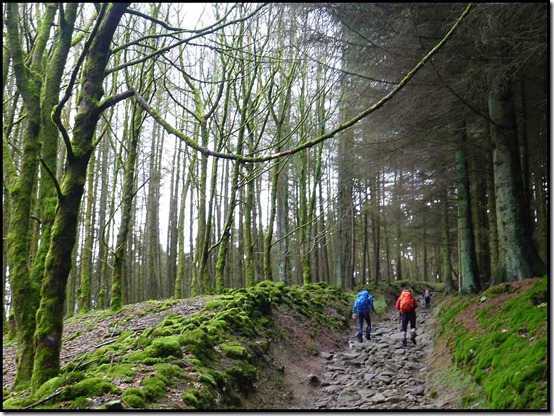 That left Graham, me, Sue, Brenda, Tim and Graham (I think), for the final stretch past Upper Ashop, where a group of 16 mountain bikers was encountered on an entertaining descent.

Shortly afterwards a helicopter landed nearby. We thought nothing of it – helicopters are often seen hereabouts, generally in relation to path reconstruction and seeding badly eroded areas.

In fading light, obstacles caused by Storm Doris were easily negotiated on our way to rejoin the Roman Road and head down to The Snake Inn, which is up for sale.

Here's our route, 21 km with about 850 metres ascent, taking a very leisurely 7 hours or so (Graham having had to moderate his pace to avoid getting literally miles ahead). 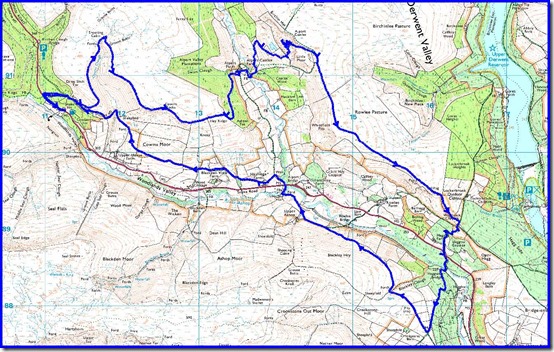 There’s a slideshow (35 images) here. Click the first image, then manually scroll through the pictures.

On return to the Inn, we discovered that Colin, one of our group who had gone on ahead by the route not marked on my map, had fallen and broken his ankle. Hence the helicopter. The minor epic had been handled in exemplary manner by various TGO Challengers and the local Mountain Rescue team. Colin was, and is, ensconced in a hospital in Sheffield. We hope the operation went well and that he’s back on his feet as soon as possible.

Colin wasn’t entered in the Challenge this year, so his accident doesn’t free up a space. However, I was at the back of the standby list at number 80 and during the course of the day I was told that there is now a place for me, so I assume that everyone who has not withdrawn and who wants to take part this year is being allowed to do so.

Just in case anybody is interested, my postings about TGOC reunions can be found here.

Finally, thanks go to Alan Hardy for organising this event, which must have been a bit more stressful than usual due to management changes at the Snake, whose staffs looked after us well, so thanks also to them. We hope that Alan’s poorly knee is well enough by May to do the Challenge, and that Sue O’s knee also gets better. In fact, a lot of people seem to be in a slightly crippled state, so good luck and ‘get well’ – Everyone!

That's a smashing route that Graham chose and such wonderful weather too.
I thought that the leader of the walk should walk at the pace of the slowest walker. That's what I was told anyway. Have ideas changed.

Yes, an excellent route. Graham can't walk slowly. By taking a diversion up The Tower he succeeded in getting behind everyone, but by the time he caught up, most people had left his (widely advertised) route in favour of going 'off piste'.
[I don't know about the leader walking at the speed of the slowest, but it's logical that the leader should wait for everyone to catch up and check that they are in sight, and I'm sure Graham was doing that. And if adults with maps chose to go off-piste, that's their choice. In fact that almost always happens at this particular event - 20+ people set off together and arrive back in small groups. it's just the way it works.]

Yes, everyone would be capable of doing their own thing. I was just having a short leg pull. Or maybe a fast leg pull on Graham.

That's a lovely route - you were so lucky with the weather too. I was surprised to read that the Snake has changed hands again.
Congratulations on getting a place on the Challenge, see you in May then.... although probably before!

Thanks JJ. We were lucky then, but the prospect for the Lakes this weekend is 'uncertain'.

Yes, the fee has been paid, train to Oban booked (£27), and route - Oban to Arbroath - submitted.

Hope to see you before then. Our coffee pot is on most mornings...