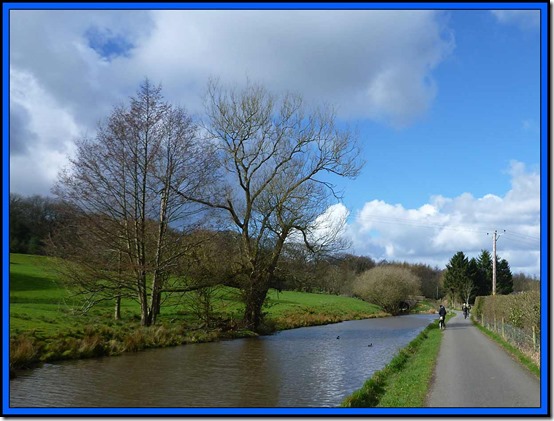 Parkrunners Paul and Andy joined me for a morning jaunt in a break from the current showery weather.

Paul’s roomy Espace took us to the end of the Middlewood Way in Marple for a 9.30 am start.

The Middlewood Way is a ten-mile (16 km) "linear park" between Macclesfield  and Rose Hill, Marple, that was opened on 30 May 1985 by Dr David Bellamy. It follows the route of the former Macclesfield, Bollington and Marple railway, which had operated between 1869 and 1970.

We enjoyed a 6 km warm up along the track bed, skilfully dodging dog walkers and joggers, as far as Poynton Coppice, where a couple of birdlike sculptures marked our departure down Shrigley Road. 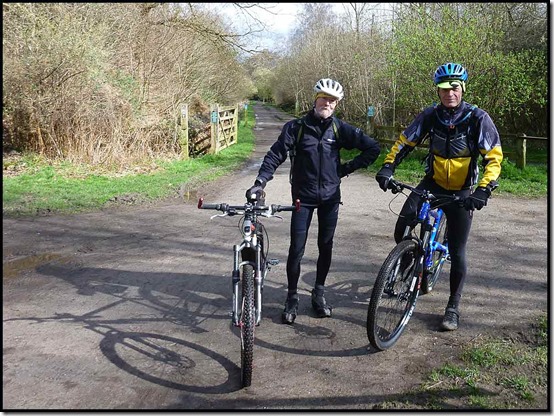 We met a chap known to Paul, who we encountered again at West Park Gate (he had taken a short cut), where we started the first proper climb of the day, into Lyme Park. I paused to record the pretty woodland – Andy was far ahead and Paul is just visible in this scene. 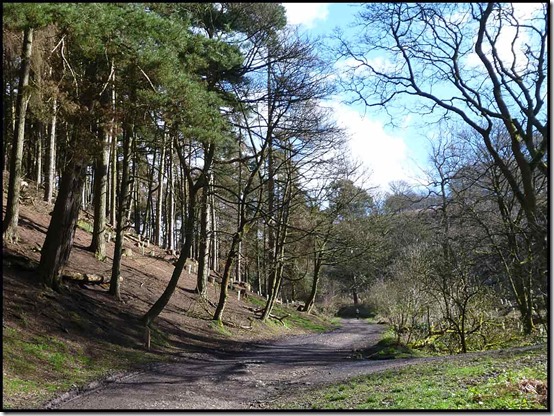 There’s a gate leading from Hase Bank Wood to the tarmac of the park’s roads and a test for mountain bikers, the ascent and descent of a little hill called Knott. My still sore shoulder discouraged me from going over Knott today, and Andy’s wimpishness ruled him out. Paul failed to ride up the hill due to a lack of traction in the mud, despite his gleaming new bike with its knobbly 27½ inch tyres.

However, he excelled himself by riding down the steep east side of the hill without (despite our encouragement) falling off. It’s steeper than it looks and braking on the slippery surface is totally ineffectual. 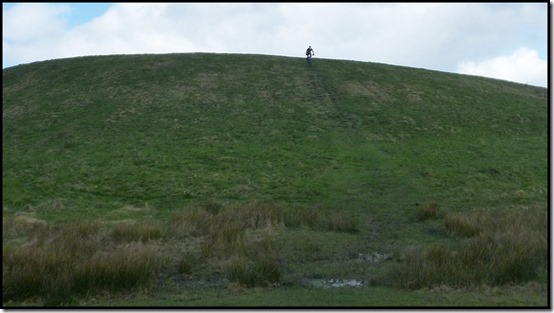 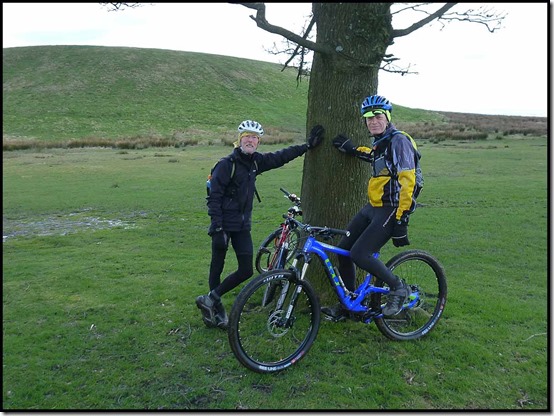 The tarmac saw us reach Lyme Hall and enjoy a cuppa at the picnic tables next to the National Trust office. Andy had thoughtfully brought enough cake to keep us going all morning. Then we continued up past the hall, the largest house in Cheshire, towards the gate at the East Lodge. 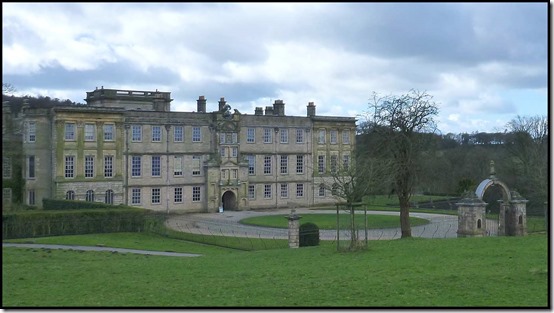 There are good views from up here, past The Cage – originally a hunting lodge and later put to various uses including that of a prison – and on to Greater Manchester. The parkrun route that we completed last August passes The Cage after a long ascent. 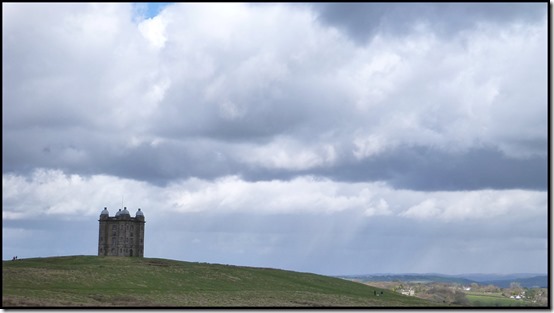 The red deer gave Andy a threatening growl, so Paul came to his rescue and shooed them away. 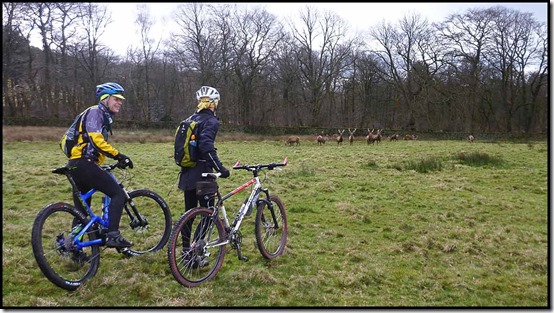 Beyond the boundary of the park there were some ‘interesting’ rocky, muddy, stony paths including this boardwalk diversion around a crumbling bridge. Here Paul realised again that the very wide handlebars on his new bike are something of an encumbrance. 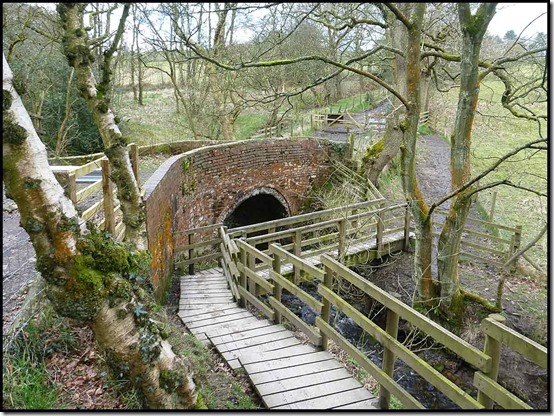 After the excitement of a long rocky descent to the A6 road (and a long wait for Andy to walk down the hill) we were happy to join the easy towpath along the Peak Forest Canal at bridge number 27. 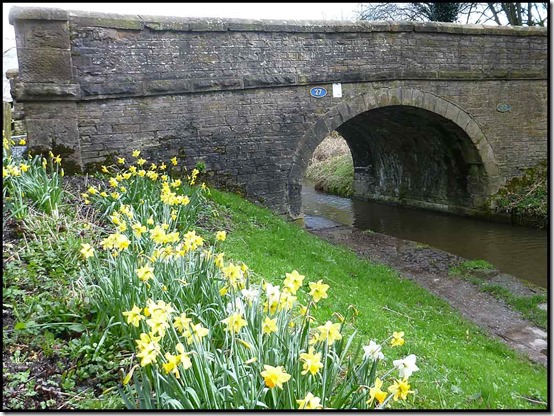 The canal offered a respite that we all enjoyed before resuming the rigours of this particular route. 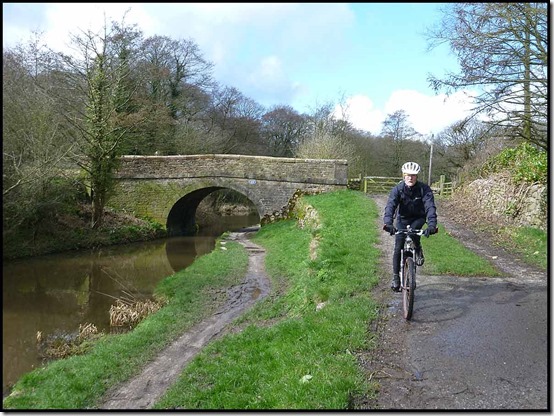 We could have returned to Marple via the easy towpath, or by a low level route from Strines via Roman Lakes. But we chose to descend to Strines and ride (walk, in Andy’s case) a steep circuit via the Fox Inn. The inn wasn’t open but its picnic benches provided a good venue for more tea and cake.

Back at Strines, where Andy might as well have left his bike earlier, we set off steeply again towards the golf course, above which we passed before taking the long and enjoyable descent down Linnet Clough to Bottom’s Bridge. Here are Paul and Andy at the bottom of the rocky descent (which is actually out of shot to the right), with just a short ride along roads to return us to the car park at Rose Hill. 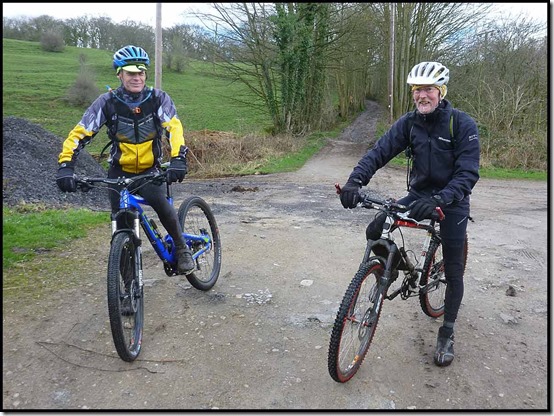 More coffee and cake from Jeanette, on return to base, rounded off a most enjoyable outing of about 26 km with 800 metres ascent, taking a leisurely 3 hours. 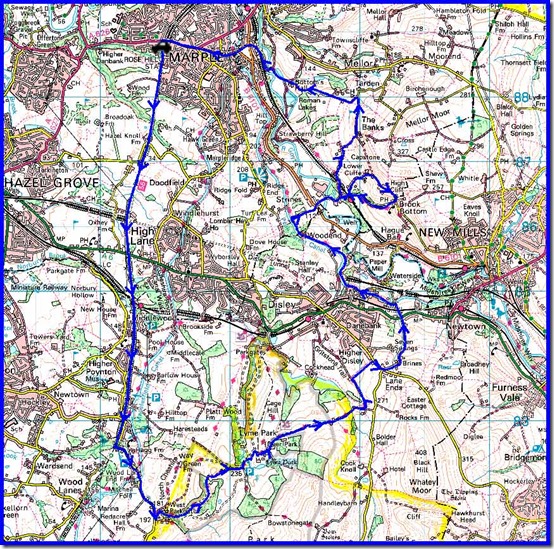 We must do more of these!

NB For the record, I was on my 1990 Shogun bike today – a bit bumpy over the rocks, but it was already filthy, and meant I only had one bike to clean when I got home…

That's a nice route, not for my road bikes though. You've fired my enthusiasm - time to get the bike out and go for a ride!

It was interesting that whilst I managed to stay on the bike over the rough off-road ground, I failed to do so when a woman deliberately drove into me outside Tesco on the way home. Luckily the only damage was to her wing mirrors. "You're not allowed to cycle in the middle of the road" she said, after coming alongside and side-swiping me!

I always did hate cycling along roads... I usually use the pavement.