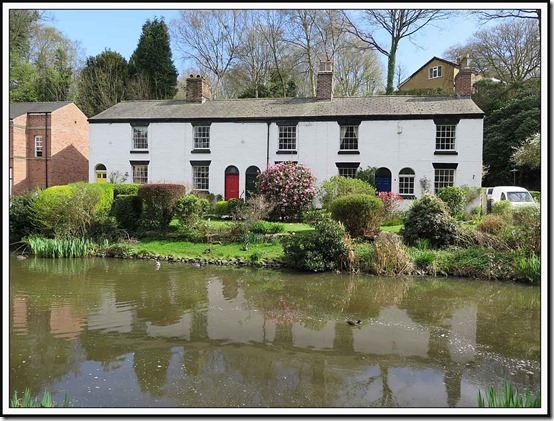 After the excitement of supporting the Manchester Marathon, Sue, Ken and I took a 15 minute drive to Lymm for a short stroll around its scenic delights, starting past the familiar Bulls Head and continuing to the old cottages beside the Lower Dam, pictured above. 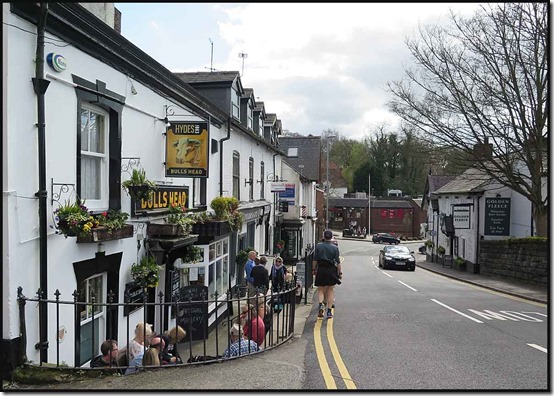 The higher reservoir, known as Lymm Dam, is much larger and is reached from the village by a series of steps up a mossy path. Cormorants, and many ducks and other birds live here. 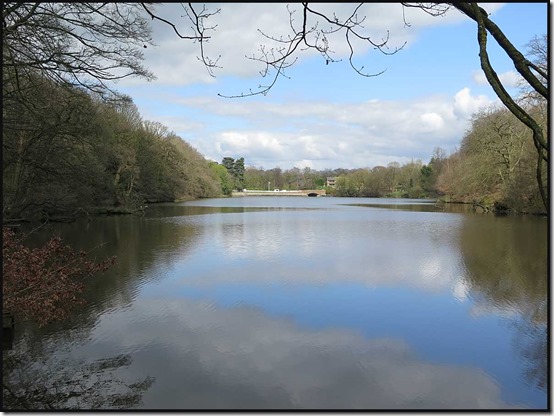 It’s a two to three kilometre walk around the lake. Delightful on this sunny Sunday afternoon, despite the crowds. 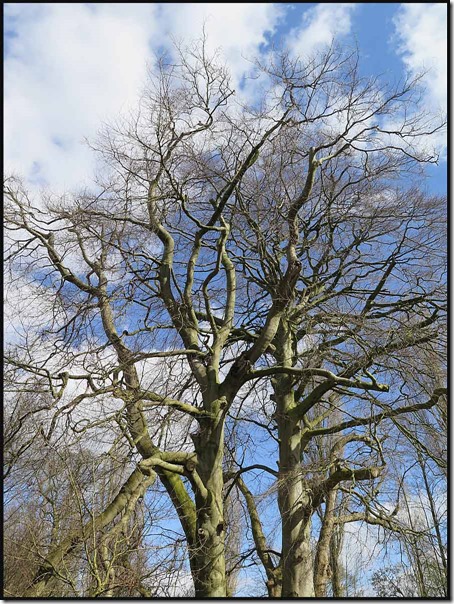 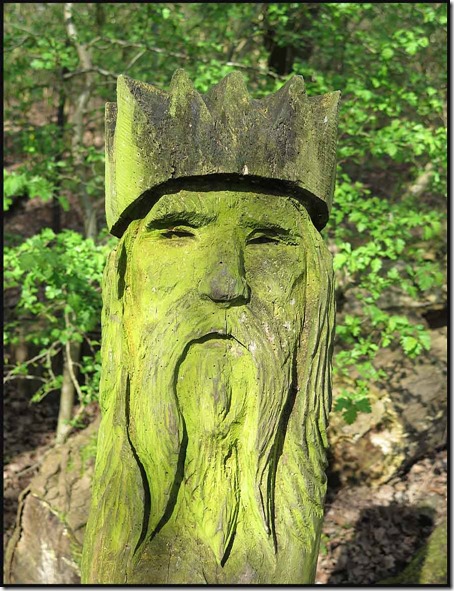 A short walk along the main road led to a left turn down a ginnel that Ken wanted to call a snicket, (lets just say it was an alleyway), took us to a lane that linked with a path to St Peter’s Church in Oughtrington. From this elevated position the walker gains fine views to central Manchester, and to Winter Hill and the South Pennines to the north. 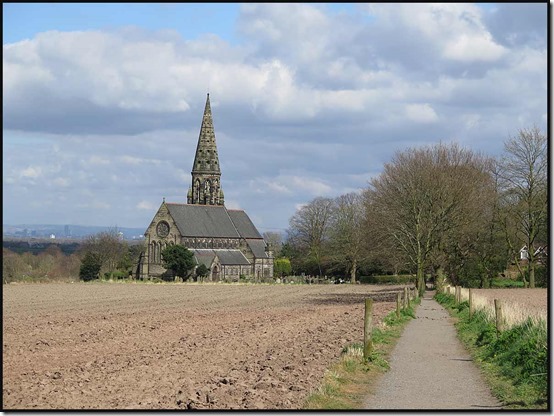 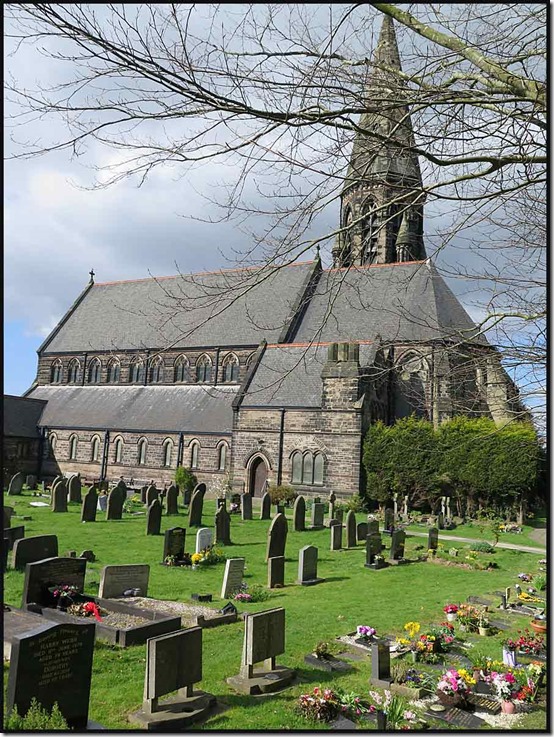 Pleasant field paths lead on in an easterly direction, now with good views towards the Peak District, eventually dropping to the Bridgewater Canal at Agden Bridge, from where the towpath provides a direct route back to Lymm. 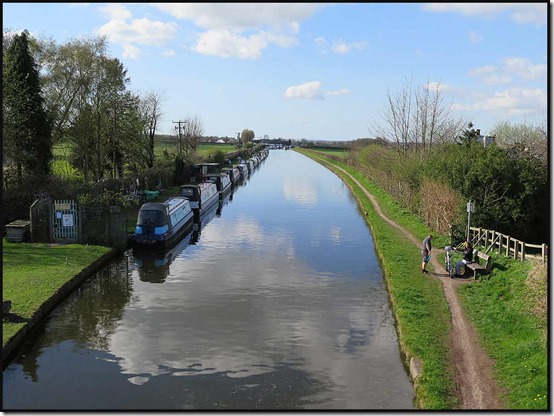 Butterbur and daffodils were still in bloom across the canal from the boatyards at Agden Wharf. It really was a lovely spring day. 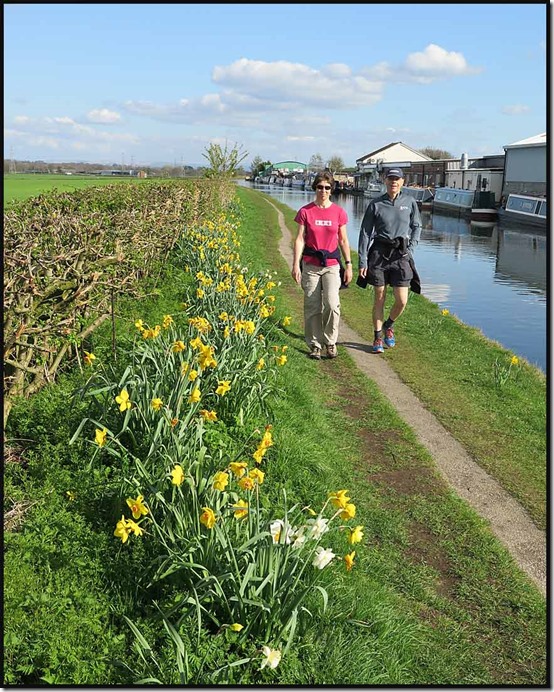 The recent dry weather had dried out the towpath nicely, so no mud was encountered as we strolled on through Oughtrington and back to Lymm. 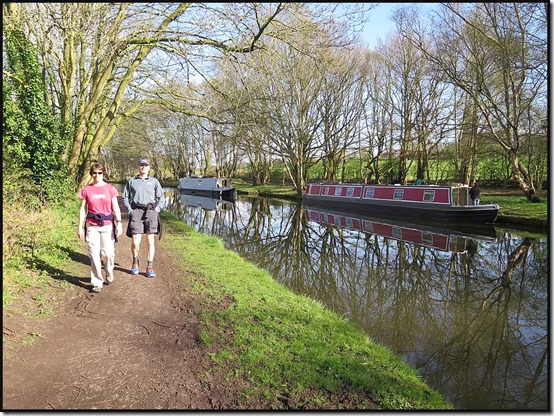 Here’s our route – just over 10 km; allow a good couple of hours. 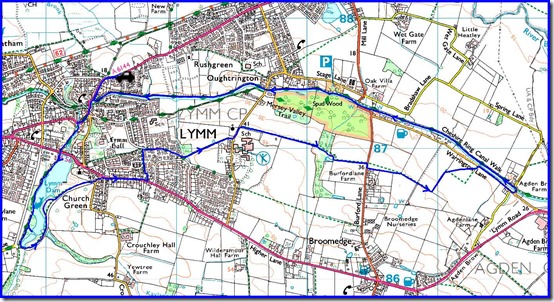 The following morning Ken left us to join Helen in Chesterfield and then travel to his dad’s in the South for the latter’s 93rd birthday celebrations. It was great to have them both to stay and we hope the rest of their trip has gone well.

Ginnel for me. I think it is probably a joint Yorkshire/Lancashire word. I particularly like this time of year when we get sunny days like that just before the leaves come on the trees. My forthcoming trip follows part of your walk through Lymm so quite a pleasant trailer for me.

Ginnel for me too. Its a very long time since i enjoyed Lymm, your post brought back good memories.

ginnel: a long narrow (roofed) passage between buildings; an alley

snicket: a narrow passage between houses, an alleyway

Here's another one, with thanks to Ali O in a spark of literacy, stimulated by the sight of her husband reading a dictionary when Sue O and I arrived in search of coffee (a perfect sample of which was duly provided)...

twitten: a narrow path or passage between two walls or hedges