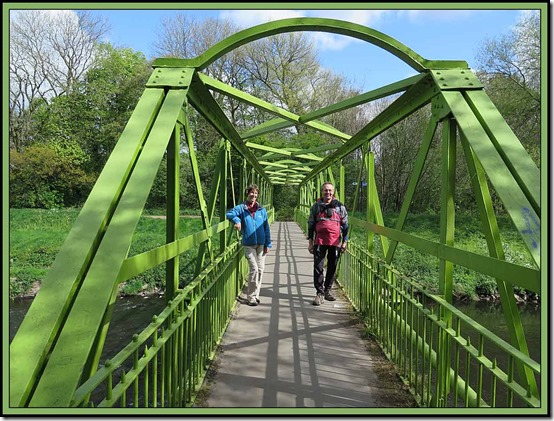 JJ was yet again to blame for this morning’s outing. He had booked tickets to Mallaig to start his TGO Challenge in a couple of weeks time and needed to visit Stockport station to collect them. There are many ways of reaching Stockport from Timperley, on foot being the most scenic.

It was a lovely morning, so Sue and I jumped at the chance of a stroll through Wythenshawe Park then the Mersey Valley to Stockport.

One of the river crossings, in Didsbury, is by Simon’s Bridge, recently repainted. The plaque records its origin in 1901, after Simon’s death. 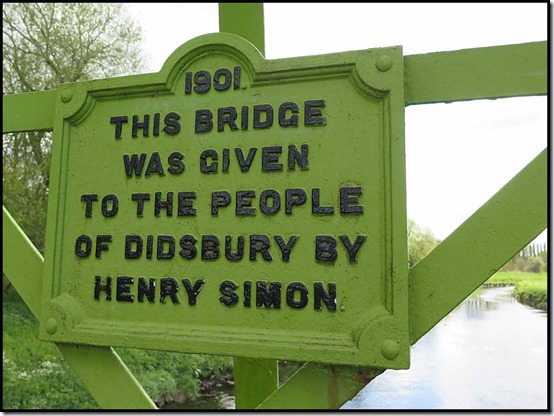 Henry Simon (1835–1899) was a German born engineer who revolutionised Great Britain's flour milling industry and in 1878 founded the engineering companies Henry Simon Ltd and Simon Carves. His second son, Ernest Simon went on to become the first baron of Wythenshawe in 1947. There’s more about this remarkable man here.

This stretch of river has lots of bends. Kingfishers can often be seen, but we didn’t spot any today. Greenfinches, jays and magpies mingled with the swallows, all busily following their own agendas. 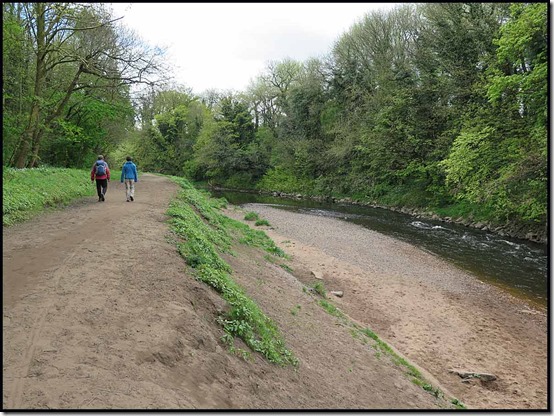 A little further on we crossed a stretch of road that forms the most northerly stretch of the old Manchester to Oxford route. In 1753 the Manchester and Wilmslow Turnpike Trust was created by Act of Parliament, with powers to build, maintain, and improve this stretch of the route, funded by the collection of tolls.

In 1755 the Trust built the first stone bridge over the River Mersey at this point. The river flows 70 miles (113 km) from Stockport to Liverpool Bay.

This part of the River Mersey is prone to flooding and the original bridge collapsed in 1756 and was rebuilt in 1758. The bridge was replaced in 1780 and again in 1861 with this current bridge. 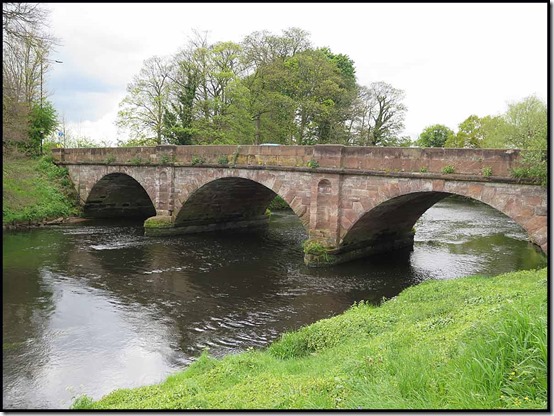 The River Mersey here historically formed the boundary between the counties of Lancashire and Cheshire and there is a boundary marker in the middle of the bridge.

The Trans Pennine Trail follows the Mersey Valley at this point. It’s a 215 mile cycle route between Southport and Hornsea, completed in 2004. There are some ornate ‘mileposts’ like the one below, many of which feature on these pages in previous postings. 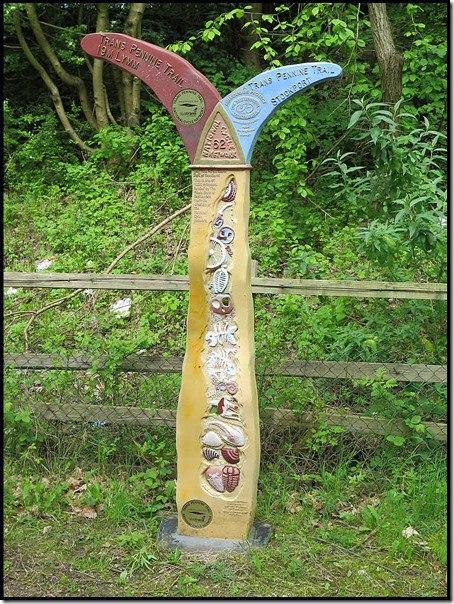 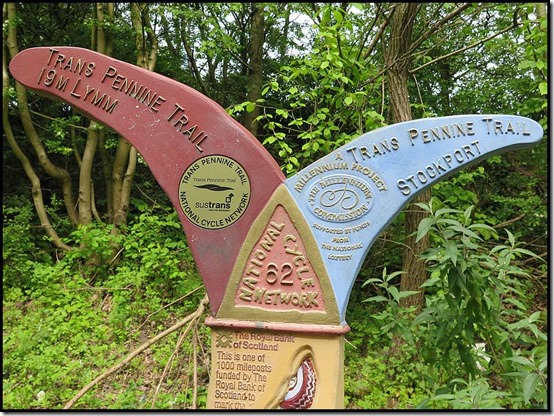 Stockport is eventually reached. The offices perched on the side of the buildings across the river at this point always amuse me. I imagine foremen or managers with a high regard for their status occupying these exclusive sites above the river! 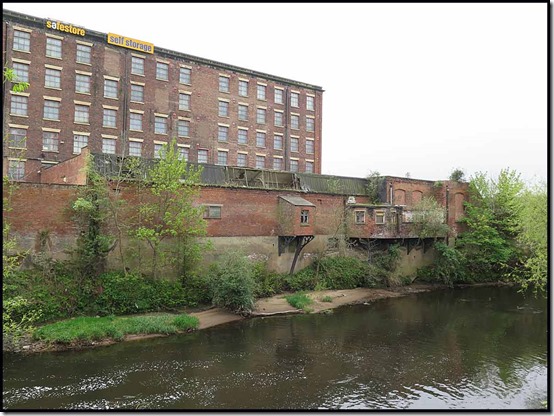 It’s a land of bridges and viaducts and even, nearby in Marple, aqueducts. 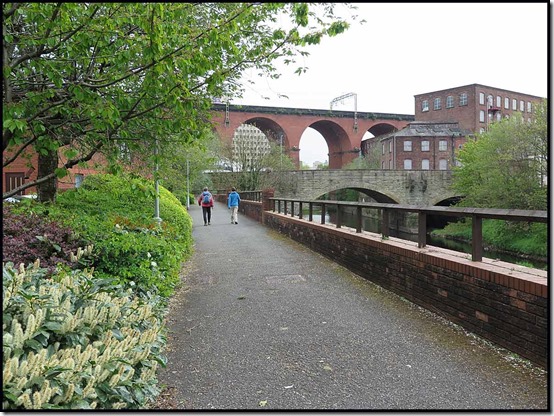 We were soon ensconced in Rosies Tea Room with coffees (tea for Sue) and toasted tea cakes after our ten mile walk. A busy place. 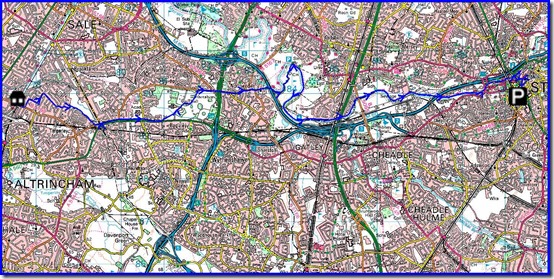 Sue and JJ went in search of train tickets whilst I picked up some Essential Supplies from Alpenstock, where Jose and Hugh informed me that they would shortly be closing as the lease expires and Jose wants to retire. Our favourite outdoor shop has been there for about 40 years. It’ll be the end of an era. There may be some bargains to be had as Jose tries to get the best prices she can for her remaining stock.

The train to Navigation Road saw us nearly all the way home, via a short stretch beside the canal, where this family was braving the cool breeze. 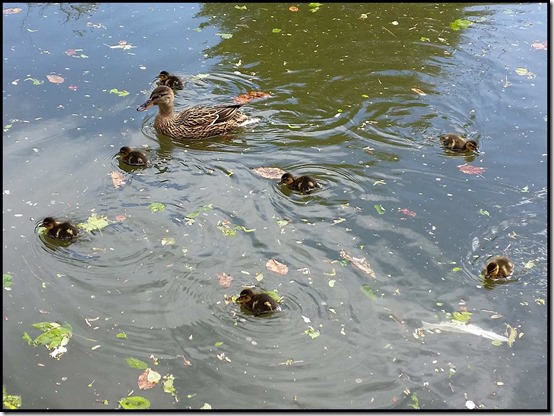 It was sunny enough to enjoy a cuppa in the garden. 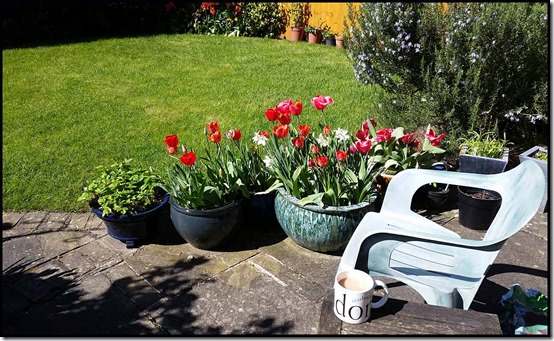