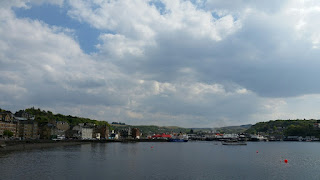 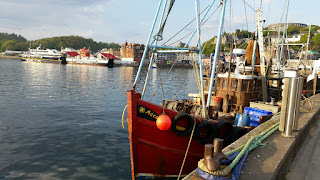 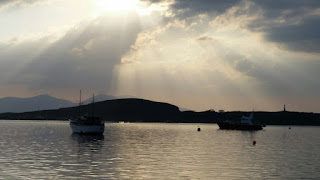 Barbara Sanders was the first Challenger I encountered - on Preston Station. There were more on the train to Glasgow, but I spent a pleasant journey with a chap called Stuart, visiting Glasgow for a short business meeting.

Lots of Challengers, as always, on the Mallaig/Oban train that splits at Crianlarich, and 'meet and greet' was provided at Oban by Mick and Gayle. After dropping off my bag at the Regent Hotel I wandered past black guillemots flirting on the seafront to Mick and Gayle's new campervan, Bertie. Graham B and I enjoyed afternoon tea and cake and a conducted tour of the impressive Hymer vehicle.

Then it was back to base before a visit by the four of us to an excellent fish and chip shop with indoor dining.

A visit to the ferry terminal then set me up for tomorrow.

All afternoon and evening it has been calm, sunny and warm on Oban's seafront. Lots of people have resorted to wearing shorts. I fear we will wistfully recall this lovely weather at times during the next fortnight...

I'm inserting a bit of Wiki information about some of the places I pass through on this, my eleventh TGO Challenge. Feel free to ignore them, but I'll start with a bit about Oban.

Oban (meaning The Little Bay) is the largest town between Helensburgh and Fort William. During the tourist season, the town can play host to up to 25,000 people. To the north, is the long low island of Lismore, and the mountains of Morvern and Ardgour.

The site where Oban now stands has been used by humans since at least mesolithic times, as evidenced by archaeological remains of cave dwellers found in the town. Just outside the town stands Dunollie Castle, on a site that overlooks the main entrance to the bay and has been fortified since the Bronze age. Prior to the 19th century, the town itself supported very few households, sustaining only minor fishing, trading, shipbuilding and quarrying industries, and a few hardy tourists.

The modern town of Oban grew up around the distillery, which was founded there in 1794. The town was raised to a burgh of barony in 1811 by royal charter.

Sir Walter Scott visited the area in 1814, the year in which he published his poem The Lord of the Isles. Interest in the poem brought many new visitors to the town.

The arrival of the railways in the 1880s brought further prosperity, revitalising local industry and giving new energy to tourism. Shortly thereafter, McCaig's Tower, a folly and prominent local landmark, was constructed, as was the ill-fated Oban Hydro.

During World War II, Oban was used by Merchant and Royal Navy ships and was an important base in the Battle of the Atlantic. The Royal Navy had a signal station near Ganavan, and an anti-submarine indicator loop station, which detected any surface or submarine vessels between Oban, Mull and Lismore. There was a controlled minefield in the Sound of Kerrera, which was operated from a building near the caravan site at Gallanach. There was also a Royal Air Force flying boat base at Ganavan and on Kerrera, and an airfield at North Connel built by the Royal Air Force.

Oban was also important during the Cold War because the first Transatlantic Telephone Cable (TAT-1) came ashore at Gallanach Bay. This carried the Hot Line between the US and USSR presidents.

Since the 1950s, the principal industry has remained tourism, though the town is also an important ferry port, acting as the hub for ferries to many of the Hebrides. There was a fair amount of 'ferry activity' in evidence this afternoon.
Today's pictures were all taken on Oban's seafront. Note McCaig's Tower.
Posted by Phreerunner at 20:26

Suddenly feeling acute withdrawal having given up my waiting list place this year.

I spent some time looking in vain for live blogging from the trail. Then I remembered you zipped up in your tent in a forest somewhere typing on your mini machine. Searching Google on 'Martin' didn't help me, but thankfully my email in box worked.

So a relief to be here now and getting in the mood!

Thanks Paul I'm pleased that you found me. I'm not sure how many people post as they go along. Facebook (I hate it but it does have its uses) seems to be a preferred medium these days. I much prefer to 'blog' - it's my diary, with no advertising, and my mother can read it without distractions.