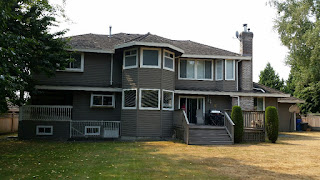 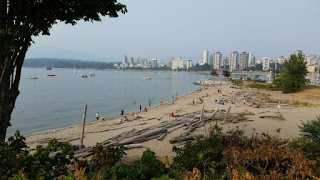 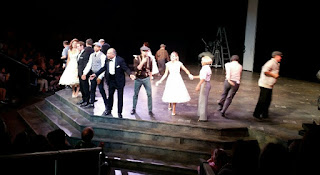 Bard on the Beach

A welcome lie-in was followed by a stressful visit to Enterprise Car Hire. Our car was hired for 54 days, but apparently the contract would have to be renewed after 30 days by way of a visit to an Enterprise depot - which at that point in our itinerary would mean a 400 mile round trip to Calgary. Shak's presence was useful as he regularly uses this branch of Enterprise. Eventually a second, manual contract was drawn up to come into force after 30 days.

The car is a black Toyota Camry - apparently a double upgrade. Rather larger than we'd have liked. Usual faffing with scratches etc, and as usual we missed some so will have to rely on photos if push comes to shove. Anyway, this vehicle is a fraction of the price of some quotes we got. Annual insurance bought in the UK to cover the excess has saved us over £500.

Eggs benedict at the Roadhouse Bakery were a most welcome brunch after spending that stressful hour at Enterprise.

Then it was back to the mansion (top picture) to try to work out the space (lack of) and access problems on this phone. Elimination of ES Explorer seems to have helped with the access I was being denied to various apps, and disabling Google+ and Dropbox, together with deletion of their files, seems to have created space for more photos. Deleting Anquet and Viewranger has also created space on my micro SD card, especially if I knew how to save photos directly to that card.

By mid afternoon we were ready to brave driving the Camry into Vancouver, where we parked at Kitsilano Beach and enjoyed ice creams and some beach volleyball.

Just around the corner, in Vanier Park, we lingered opposite a gay festival with bad music being held over the river. Passing boats, canoeists, boarders, cormorants, gulls and ducks kept us entertained. But not the music. Our view is pictured (middle). It would have been nice to see the mountains, but they are still hidden by smog.

A visit to 'Go Fish', an excellent chippie, provided a final interlude before today's dose of culture - Bard on the Beach - a competent performance of Much Ado About Nothing in a small temporary theatre, which neither Sue nor I could recall having seen before. It had been updated and adapted to be set in the 1950s. Today's final picture was taken at the curtain call.

Open up the Camera app.

At the bottom left there's the Gear icon - which looks like a cog-wheel. Tap on this.

Locate and tap on Storage Location. You might have to scroll down to find this.

Select the new storage location. This will show as either Memory Card or, SD Card

Now take a pic and check that its been stored to the new location.

Thanks HMP3. The camera app on this phone has the gear icon top left and that allows settings to be changed but gives no file location options.

Not such a problem now I've dealt with Google+ and Dropbox, so i have much more space, but probably no backup. I may try reigniting Dropbox.

HMP3 - I now realise it's the camera in the App Manager I should be looking at, but there's no gear icon at the bottom left....
Dropbox now working properly. I think it was the unwanted Google+ that was causing the main problem with space. I'll now have to reinstate all the other useful apps I removed to create space, if Google doesn't get there first!

Just to let you know I'm keeping up with your adventures. Good to hear Dropbox is serving you well. I use it quite a lot, especially for putting a link to photos in blog Comments where you can't normally post a photo.

Yes Conrad, I've only recently worked out how to use Dropbox. It seems a good tool.

Dropbox is a great tool which I use every day. One option would be to save or back up all your photos to Dropbox when you have a reliable wifi connection. But you do need internet to access your file. But now you know how to save to SD card, buy more SD cards as a second backup which doesn't require internet access.