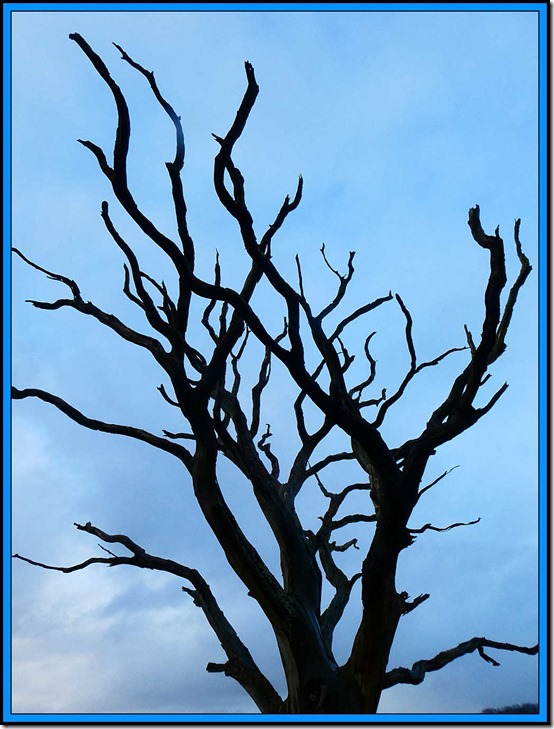 Whilst others were limbering up in preparation for two parkruns on New Year’s Day, Sue and I were enjoying a banquet and a late night at Lyn’s house in north Manchester.

We were pretty full by the end of the evening, after losing count of the number of courses served up by an assortment of participants. 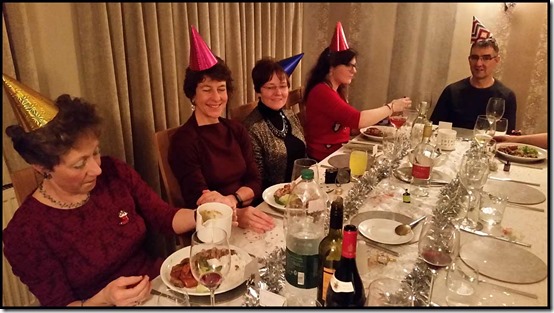 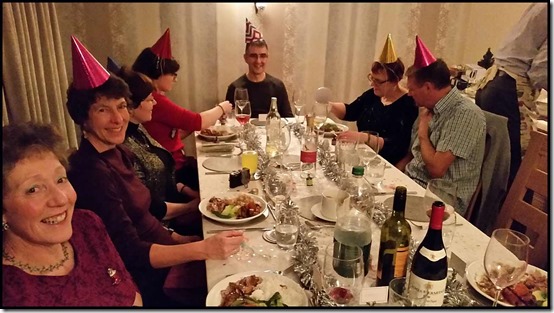 Delicious. A lovely evening. Thanks go to Lyn and Robert for hosting. 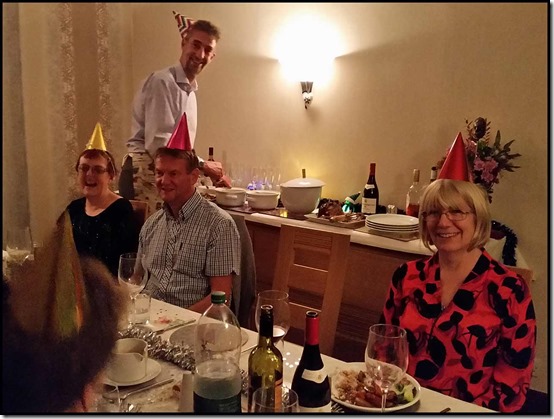 The unfinished ceviche made a fine substitute for marmalade on New Year’s morning, and was finally utilised by Sue and me as a starter later on. Nothing goes to waste in our kitchen.

Sue and I are struggling with heavy colds, so we weren’t inclined to rush off. But when we did, we headed gently up to Conrad’s house in Arnside. The idea was to wish him a happy new year, then enjoy a stroll in the Silverdale/Arnside area.

Conrad is recovering well from a replacement knee operation, albeit unable to join us on a walk. After a long chat, it was afternoon by the time we set off up Arnside Knott. 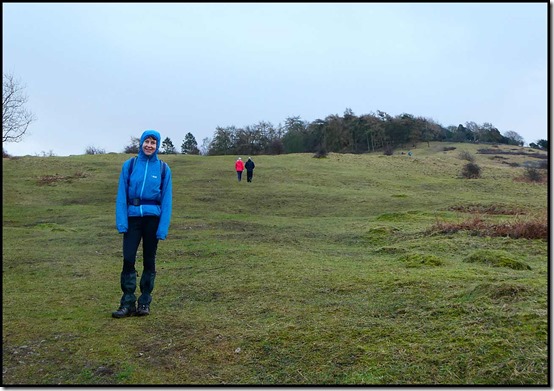 Occasional squalls didn’t dampen our enthusiasm, and a fair number of folk were encountered. The following view from Arnside Knott across the Kent Estuary shows the Lake District to be engulfed in cloud, so we were happy with our decision to head for a low southern hill.

Here’s a picture from the trig point. 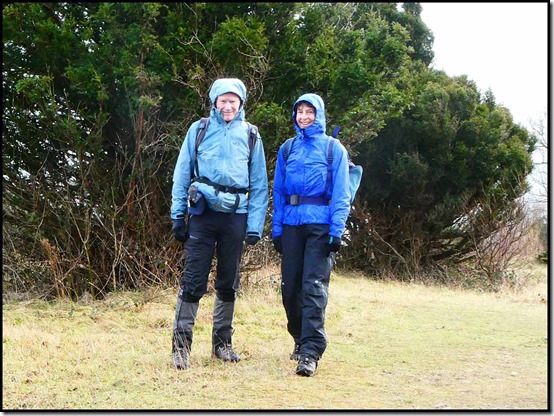 We headed along contouring paths down to Arnside Tower, which is visible to the left of Sue’s head. You can just see a new path that now sensibly skirts the yard of the nearby farm. 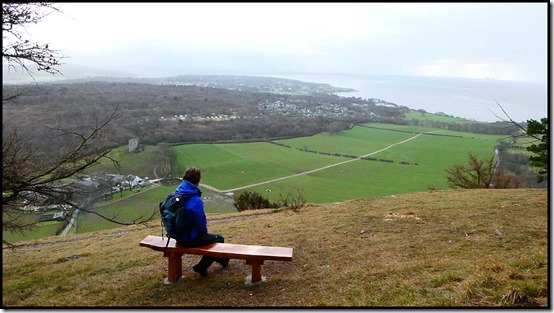 The signage in this area is pretty good, but this particular sign appears to have suffered the same fate as our old garden fence! 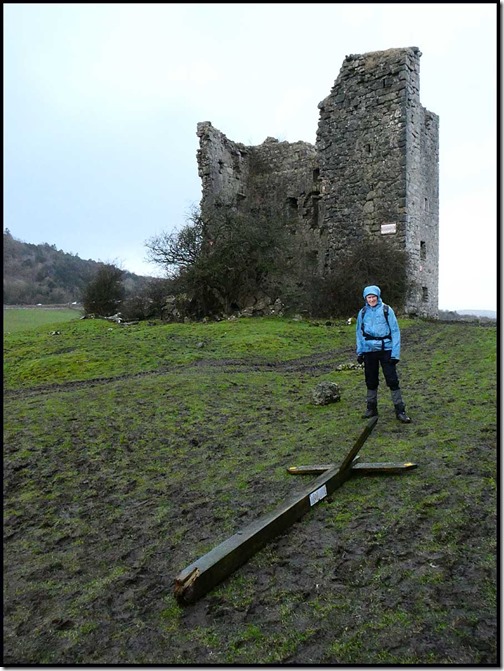 We continued over Middlebarrow, through Holgates mobile home/campsite to Elmslack, for lunch on a bench at Elmslack Well, upon which a litter bin has been judiciously placed!

A pleasant path then led around to Waterslack, where the railway was crossed and we soon joined a permissive path not marked on the map, past this distinctive tree, to the Hawes Water bridleway. 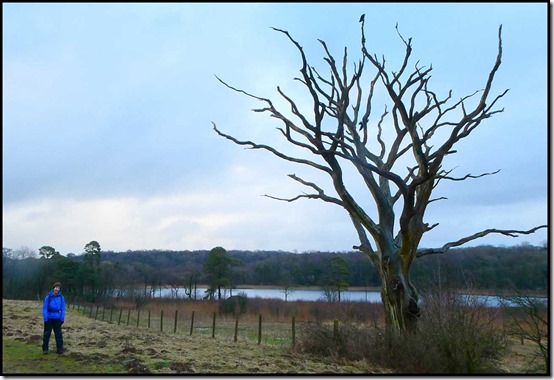 Last year’s visit on 2 January yielded a photo taken near here that now glows at us from January’s calendar. Today’s conditions were less sunny, and as we progressed along the footpaths towards Hazelslack they got progressively more muddy. This is ‘before the mud’. 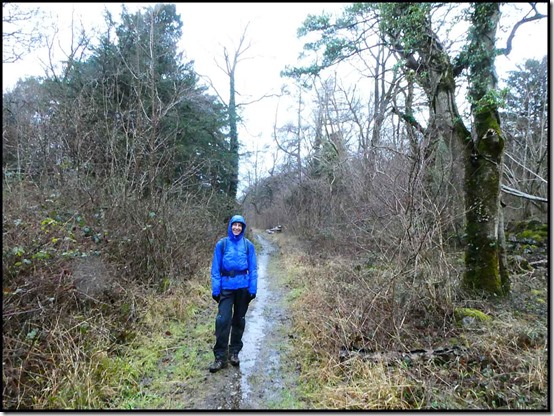 Hazelslack is a farm next to a ruin, much in the same vein as Arnside Tower. 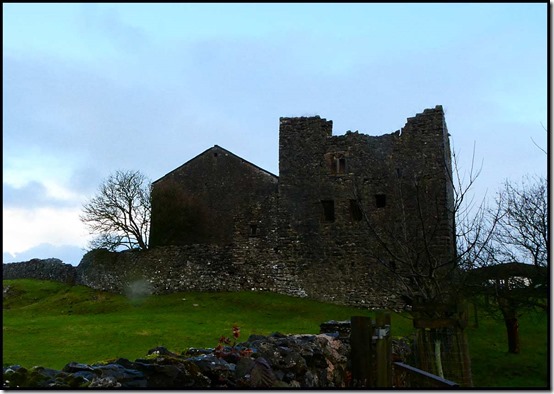 We joined the estuary path to the north of Carr Bank. This had been inundated by the tide when we arrived earlier, but now the water had receded, with views to Arnside beyond the grassy area that has sections of mud where the grass appears to have been mechanically removed. I wonder why? 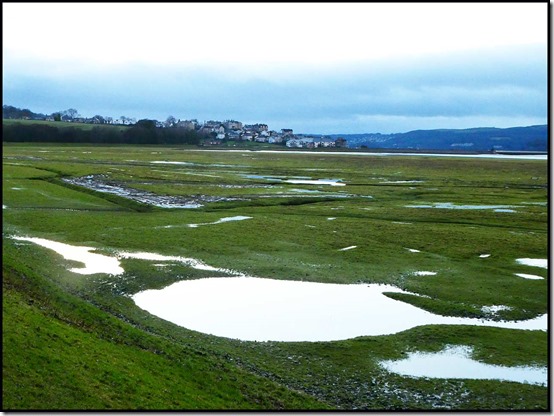 Having supplied coffee and cake earlier, Conrad (aka ‘Sir Hugh’) was now well disposed to offering tea and (excellent) biscuits before we tootled off home. By coincidence, he was busy exchanging emails with fellow bloggers, Gayle and Mick. He has a very homely spot, with a view to Ingleborough on less cloudy days (subject to an errant chimney pot for which he is still scouring eBay for a bazooka!). Here’s our route, a very pleasant circuit of 13 km, with 300 metres ascent, taking about three and a half hours at a gentle pace. There are lots of alternatives in this area that is happily stuffed full of picturesque rights of way. 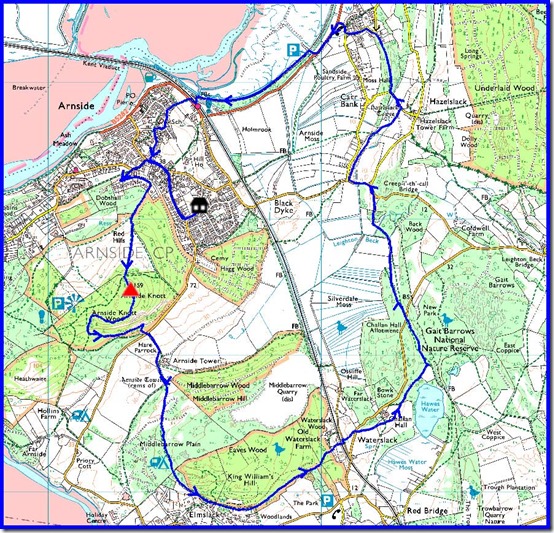 Hi Martin,
We were in Eaves Wood, orienteering with about 150 other people.
The turf is removed for bowling greens and cricket pitches, or so my Dad tells me, it's excellent short turf with only grass on it, most weeds are killed off by the periodic salt water inundations, like the one you saw - we had very high tides that week.
Happy New Year (very belatedly) I hope you are both soon over your colds.

Thanks Mark
When we passed the sign to the Pepper Pot we wondered whether you'd be up there!
That's interesting about the turf, but does it grow back, or is it re-seeded, or is it just left as a muddy estuary mess?
Antibiotics finished on Friday and we are back to a regime of light exercise, so we are on the road to recovery.
M