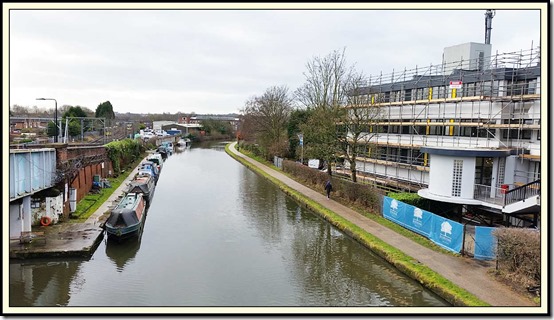 You haven’t missed anything. We haven’t been out very much at all, in an effort to recover from the chest infections that took their toll at the start of the year. Apart from one glorious spell whilst we were confined to the house, the weather hasn’t been that good either.

JJ has also been afflicted by an assortment of infections, but, feeling a bit better on Monday morning, he decided on a gentle stroll to Dunham Massey. Luckily, Sue and I were both available to join him at very short notice, and by 11.30 we were waiting above the canal on Timperley Bridge, with the view that heads this posting stretching towards Altrincham. In common with quite a few former industrial sites bordering the canal, Nelson House – on the right of the picture – is being converted from an office block to apartments.

It was a dull morning weather wise, but free of rain and a very welcome burst of fresh air, albeit the towpath beyond the increasingly derelict Bay Malton pub was extremely muddy. We wondered when the Bay Malton to Lymm section will be resurfaced?

We left the canal at Little Bollington and crossed the Bollin by the weir. The river is quite full at present, and the fields bordering the track to Dunham Massey are good for the waterfowl that visit at this time of year. 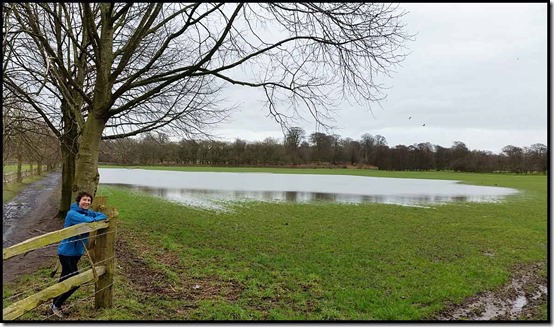 Sue and JJ were in a rush for coffee. 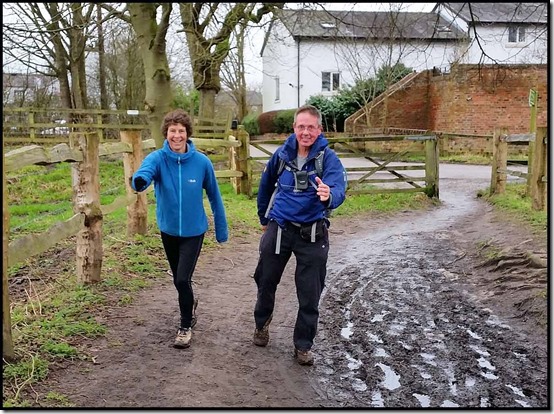 Whilst JJ ploughed through the ankle deep mud that spanned the track, Sue and I found a convenient fence! 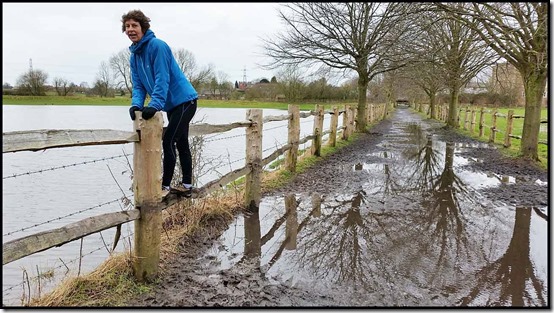 Then we strolled over the golf course to the noise and bustle of the A56 road and Altrincham’s improving town centre. JJ and Sue walked back to Timperley Bridge by a more direct route, whilst I sourced dinner and got the tram to catch up with them.

Here’s my route – 12 km with less than 100 metres ascent, in about 2.5 hours plus breaks. Thanks to JJ for stimulating this little outing. 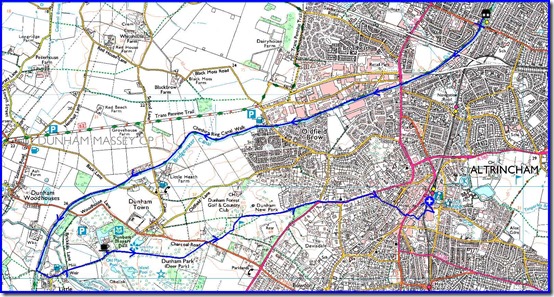 Our convalescence has involved a couple of very gentle parkruns at Wythenshawe. The one on 14 January, using the ‘Bow Tie’ course, was very muddy. Neither Sue nor I could keep up with the 30 minute pacer, and I was totally spent at the end despite being nearly ten minutes off my best pace.

A week later we were both a couple of minutes quicker, and not so tired afterwards, on another very muddy morning. ‘Muddy passage’ which was resurfaced and lost its ‘label’ for a while last year, lived fully up to its name, having deteriorated to an ankle deep slurry of mud and horse droppings.

I’ll take a picture next week if I remember.

The usual melee at the end of the run is shown, below a rare image of Michael, whose birthday is within a week of mine, so our ‘age-related’ results are always in the same category. Michael has normally finished and is on his way home by the time I trouble the time keepers, so it was a surprise to pass him at the end of the first lap. It turns out that we both have hamstring injuries, but currently his is worse than mine. I hope you can get back to full fitness and your 250th parkrun soon, Michael. 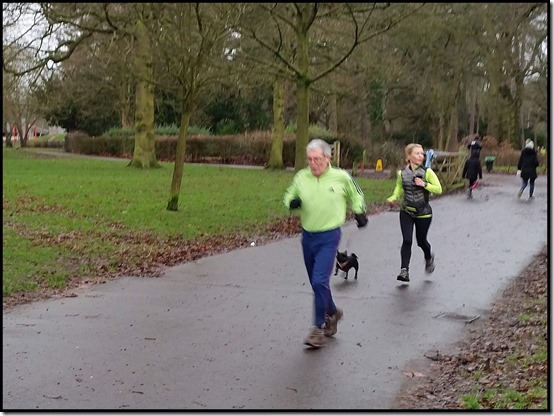 I’ve not been completely inactive whilst confined to the house, and the next series of postings results from a re-visit to a diary from 2007, shortly before the commencement of this blog. So I’ve digitised the entries and will reproduce them here for a trip to the Zillertal Alps where Sue and I completed a week long hutting trip from Mayrhofen. For anyone seeking an easy hutting trip in Austria, the route described in the diary that will follow this entry deserves serious consideration.

This posting may be a bit messy as I'm getting "The remote server returned an error: (500) Internal Server Error." when using Open Live Writer, so I've had to resort to the cumbersome 'Blogger' software. And it takes ages...

Now, a day later, Open Live Writer has returned to life so I’ve replaced yesterday’s posting – it’s the images that cause the problem, the text posts ok. Using Blogger, the images on the blog are very low resolution, but if you click on them you get a much clearer picture, whereas in OLW the images on the blog are better, but they only improve a little when you click on them. Ho hum. But migration to Wordpress, which may be a better platform, looks really tricky.