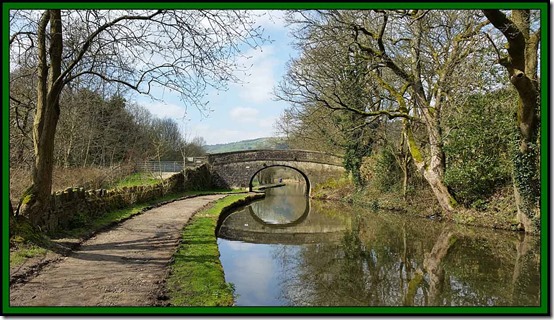 I’ve been taking part in the Calderdale Hike for many years. See here for more reports.

Having thought that the date clashed with the Manchester Marathon, I thought I wouldn’t be taking part this year, and having done that marathon I felt I needed a bit more recovery time before setting out on a 22 mile challenge walk.

So I didn’t start the Calderdale Hike. If I had done I might have captured the above image of the Rochdale Canal near Luddenden a little earlier in the day!

Instead, Sue and I cycled along to Wythenshawe Park, where I lined up with a few other masochists (below). Other parkrunners, eg Sue Strickland, should also have been on parade but didn’t turn up on the day. It was a very sociable occasion featuring deep mud and slithery grass. I wore trainers with smooth soles. A mistake, but 25.47 was an acceptable time for 5km on my first run since the marathon and it didn’t seem to make a sore knee any worse. 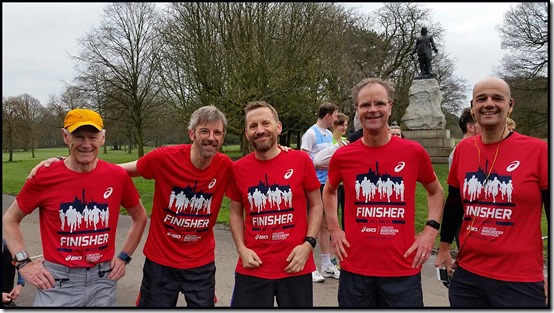 After lunch I headed off to Calderdale and parked in Luddenden for a short jaunt and an encounter with Calderdale Hikers.

The towpath at Luddenden is being re-laid. It’s good to see this canal infrastructure being maintained. 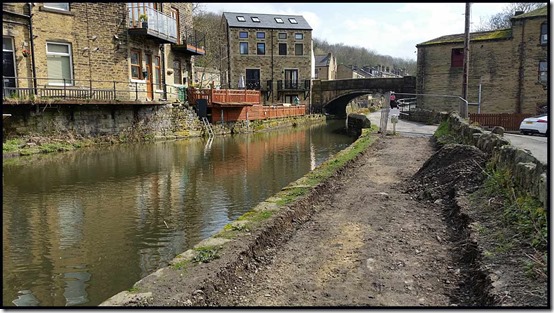 It’s daffodil time in Calderdale. Rarely did they leave my field of vision on this walk. 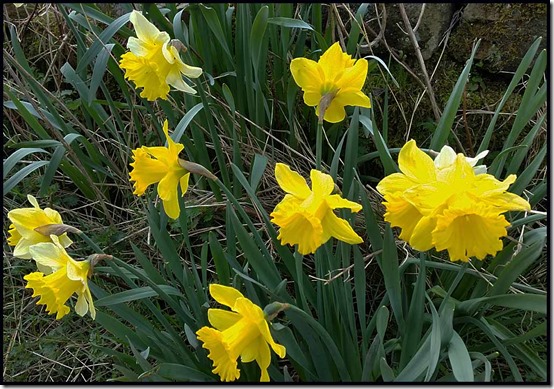 An interesting overflow system. The water from the full canal escapes down the cobbled incline to a stream, with walkers using the planks to the right. 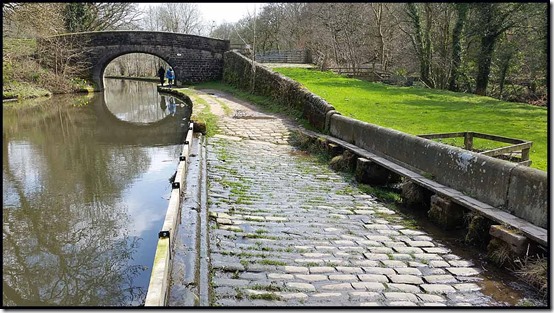 Here’s the lock at Brearley, where I forsook the canal and headed up towards Nab End. 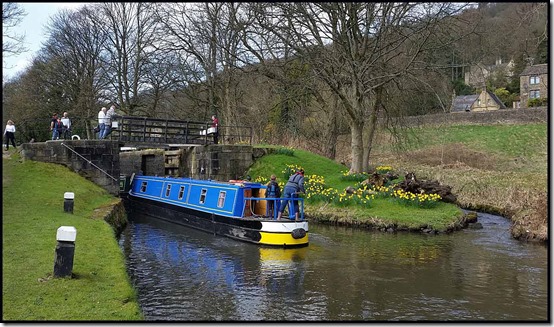 The ascent was directly into bright sunshine – what a delight to see and be warmed by that after the recent dull, cold weather. 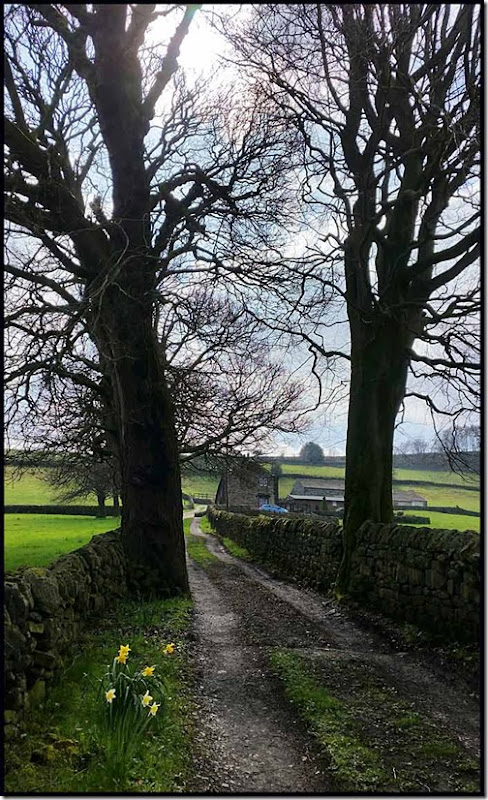 Looking back to Wheatley Royd Farm, all was well with the world. 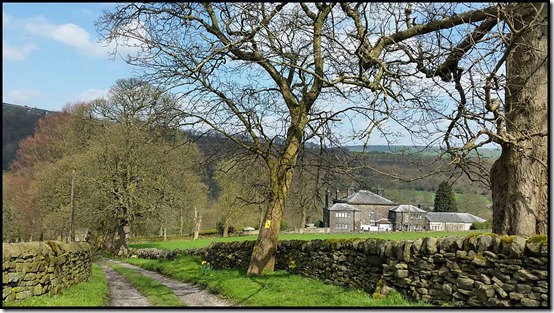 It was a long but leisurely haul up to Nab End, from where there are expansive views towards Hebden Bridge. 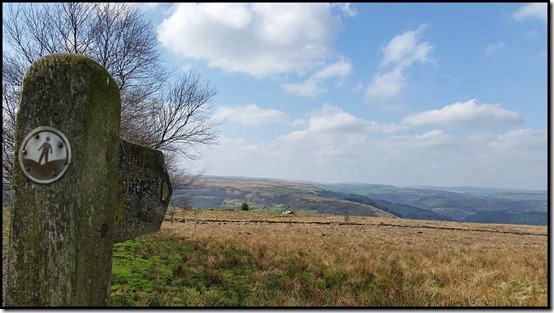 Signs proclaim that the quarry is open ‘Only to Pedestrians’, for health and safety reasons. I can only interpret that as a ban on climbing the quarry walls. 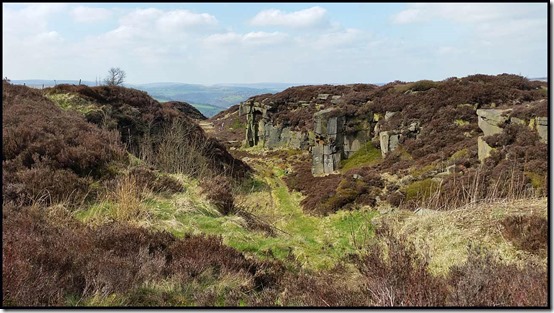 Nab End is often the site of a Calderdale Hike checkpoint, but the Hike routes (22 and 40 miles this time) are changed every three years, with the change this year being to celebrate the 40th running of the event, and Nab End not being used this time.

The road to the quarry is clearly rather old, with the stones having been worn down by many years of use before the days of the pneumatic tyre. 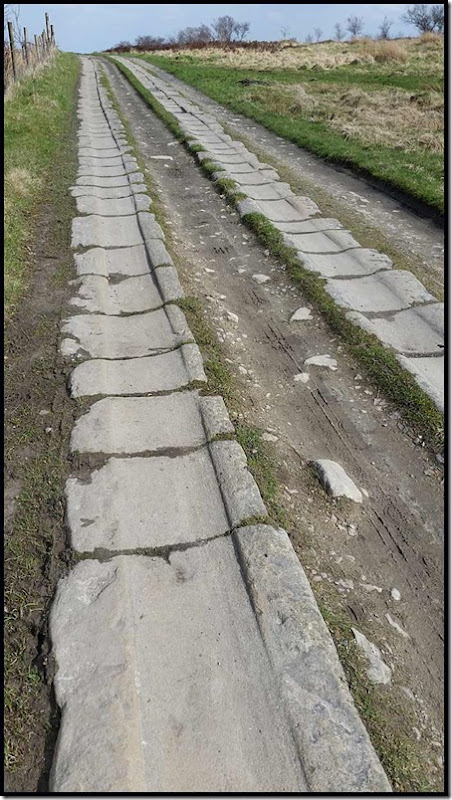 After Nab End my path descended gently to Sowerby, where St Peter’s church is just visible in the centre of the next image.

Some of the dry stone walling in this area is truly wonderful. 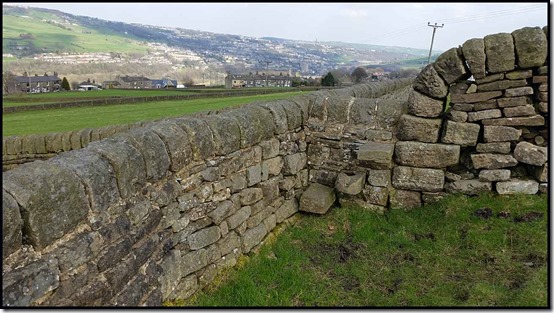 My cross-country route brought me out at Well Head Lane, from where it was an easy stroll into Sowerby, where St Peter’s church stands in a prominent position at a ‘Y’ junction. My plan was to visit the Calderdale Hike HQ at the cricket club. The usual team was on duty, all looking rather mustardy – the ladies in the kitchen were really bright yellow… 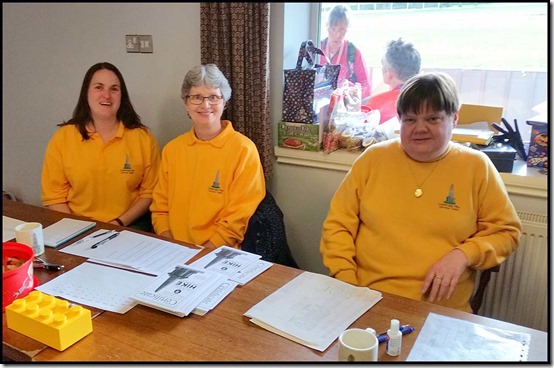 I took more pictures but accidentally deleted them when the phone told me it had run out of space. Anyway, in exchange for a donation equivalent to the entry fee, I received a nice cuppa but felt I had to decline the generous offer of a special 40th anniversary medal featuring Stoodley Pike, past which the hike often passes.

After chatting at length with some of the finishers enjoying a laze in the sunshine outside the cricket pavilion, I headed back down to the canal, with good views to Luddenden and beyond.

Crossing the River Calder, the debris lingering in high branches of the trees lining the river, was a reminder that the weather isn’t always this benign. 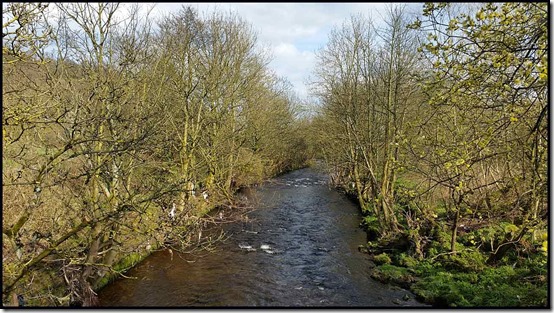 Between the river and the canal lies a resplendent meadow, empty of everything but grass, and signs that indicate that anyone venturing onto this pristine place does so at risk of dire consequences. 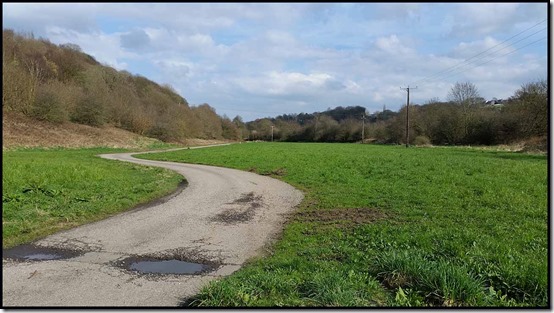 I’d been meeting various hikers. The 22 milers were ambling gently along, whereas the 40 milers were dressed to run, and were doing their best to do just that. The last checkpoint before the finish was situated at the easy to miss turn off the canal before the ascent back up to Sowerby. I chatted to the marshals. They told me they were usually at a chilly Nab End, whereas this year they can enjoy a warm spot by the canal. They would be there for some hours yet. 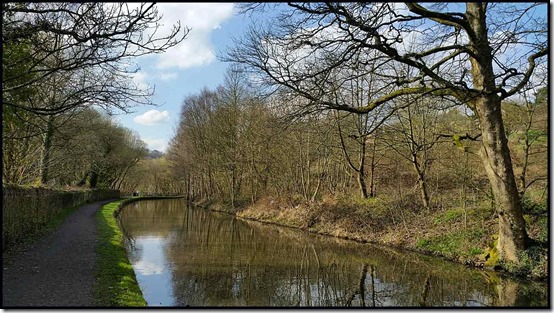 A mile post told me I was 2 miles from Sowerby Bridge, and in the other direction, 30 miles from Manchester. I’ll have to do that on a bike sometime. (Good training for a TransAlp bike ride!) 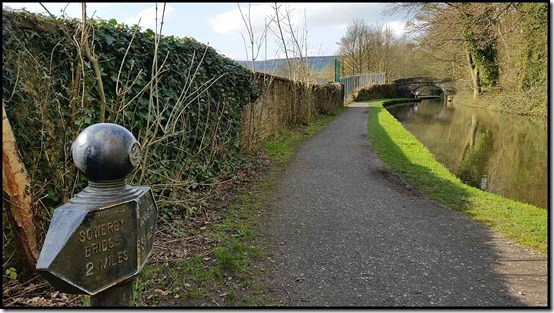 At Luddenden, a small sculpture (a ball of wool?) graces the towpath, together with an information board that explains that following its completion in 1804, the canal was the motorway of its day. Hereabouts it was lined by huge mill buildings that have long since been demolished. There’s an extensive industrial heritage that I haven’t time to go into here. 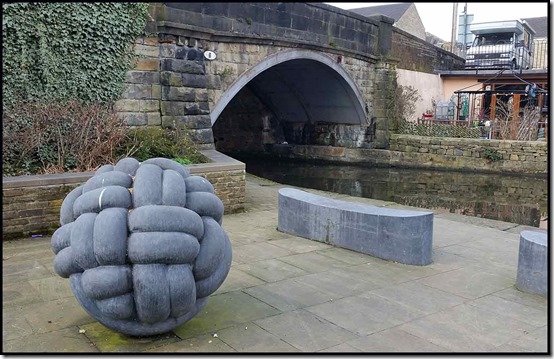 Here’s my route, a very pleasant 12.5 km, with 300 metres ascent, taking me three hours, and not worsening my sore knee. 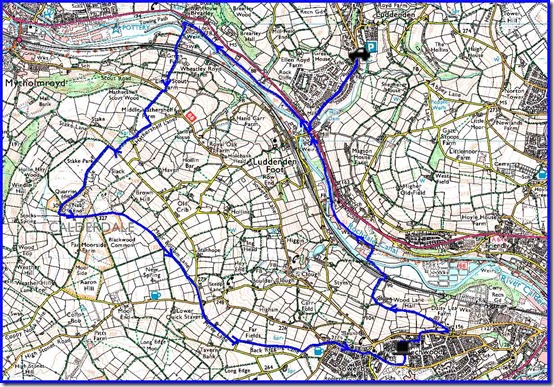 All today’s pictures were taken with my Samsung S5 phone.

A varied route- There is something calming about those canal shots - perhaps it's the leisurely pace at which those narrow boats progress - no hurry.