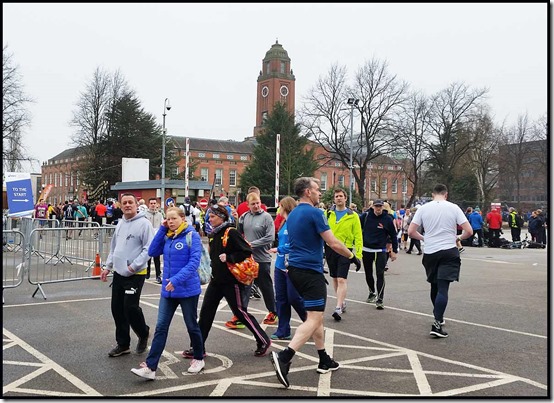 What a brilliant event this was. I left home at 8.15 and got the tram down to Old Trafford (pictured above), where there was an atmosphere of calm expectancy. I could have left it another 30 minutes, but the bin liner I’m clutching in the photo below kept me warm in the 6ºC weather. 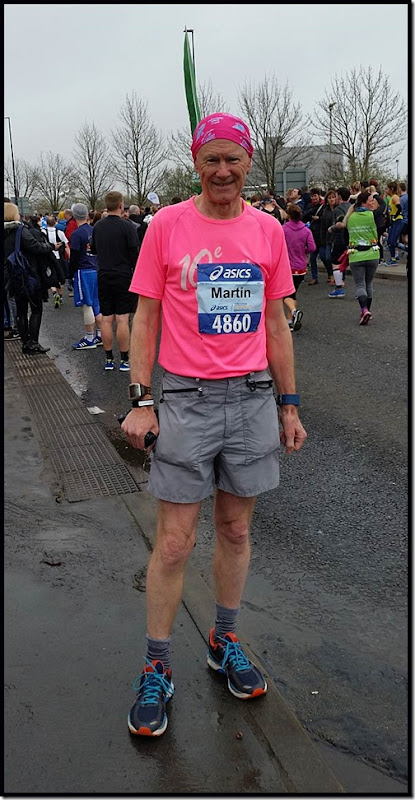 I started right at the back of the nearly 10,000 strong field, leaving space for those ahead. This worked well for me. I chatted to other fundraisers with rather more imagination than me regarding ‘dress sense’. 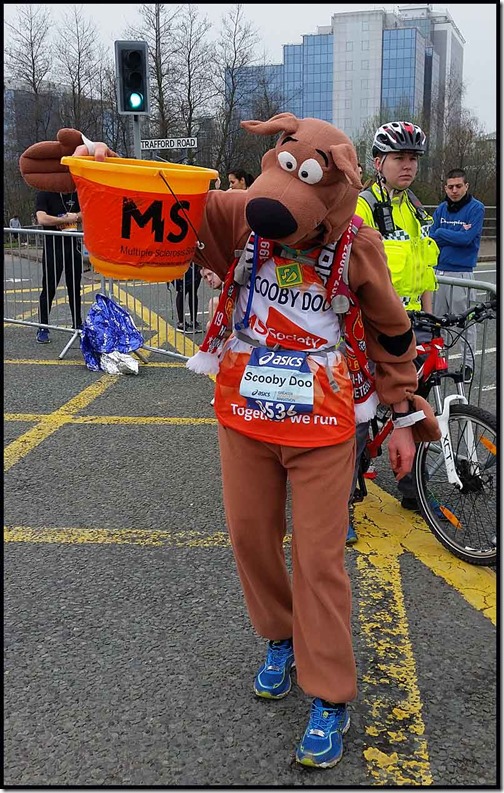 Starting at the back found me with like minded folk, well behind the five hour pacer. Sue Strickland, parkrunner and ‘Dragon!’, spotted me and I trotted along with her and other Dragons for the first few km, after which I slowly pulled away from them. It was good to have the company though, and it restrained me to my planned 6.30 per km pace. In my previous two marathons I’ve run as far as I could at 6 minute pace, but I found that pace slowed as the run progressed.

This time, encouraged by people like Ken and Norma in Altrincham, where I passed a large gaggle behind the 4.45 pacer, I managed to maintain the 6.30 pace for 30 km, despite a comfort break and a couple of banana breaks, courtesy of Sue and Helen in Timperley. I’m pictured at the second of these, at 23 km. 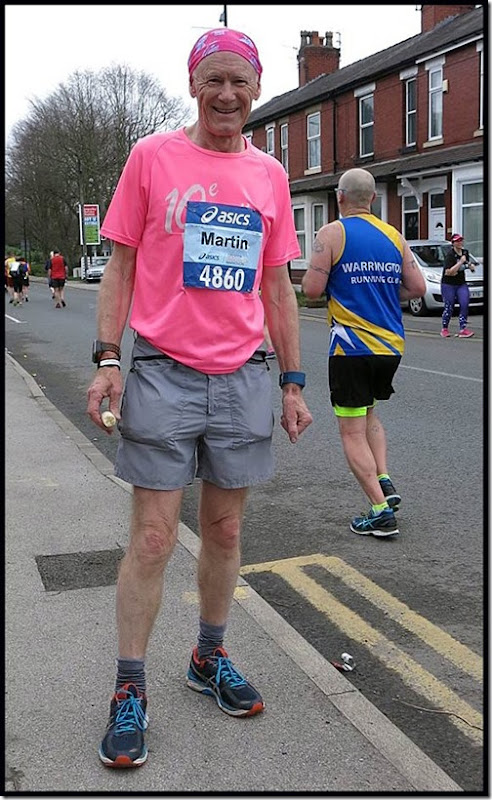 Not unexpectedly (after minimal training featuring just a couple of 5 km parkruns) things got harder after 30 km, and my pace slipped over a few km to 7 minute kilometres. There was a slower one at km 35 thanks to the need for another comfort break.

The support was fantastic, all around the course. My previous experience told me that if I stop running I’ll walk slowly and lose my rhythm, so when I felt I was close to ‘The Wall’ I just slowed my pace; others around me were walking nearly as fast, but after a while I found I could increase my pace again, especially when being encouraged by the locals. Quite a few folk were suffering from cramp, but I just had a sore knee, virtually from the start, which I was able to ignore.

Regular chocolate and jelly baby intake seemed to keep me going, and after the 41st km I felt able to push on for the last 1.4 km, and my pace of 4.39/km for the last 400 metres was faster even than my sprint to the finish in Toulouse in 2016, where I was forced on by a Frenchman. This time it was my turn to encourage others during my flight to the finish. It was good that Sue and Helen witnessed this on the U-tube live broadcast!

The finish was jollified by Wythenshawe parkrun’s ‘meet and greet’ team.

As you can see from the picture below kindly taken by Martha during a break from dancing, my knee hadn’t really started to swell at this point. 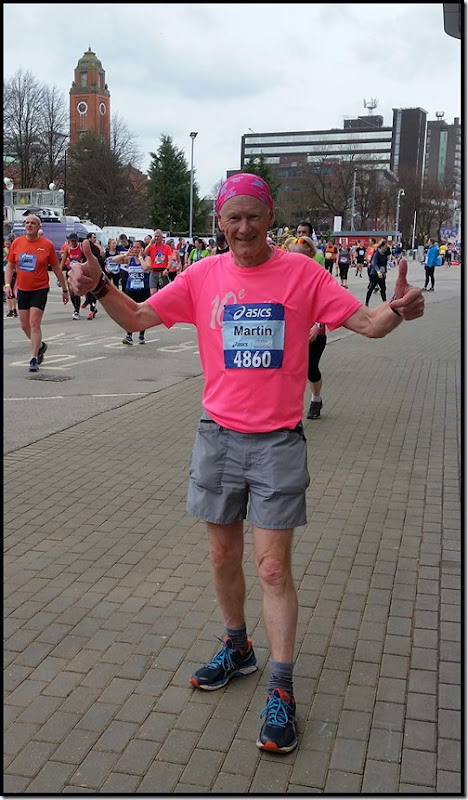 By then I’d already received a text message with my time, and the full results were soon available – see below, though there’s a glitch with the Mile 20 data. 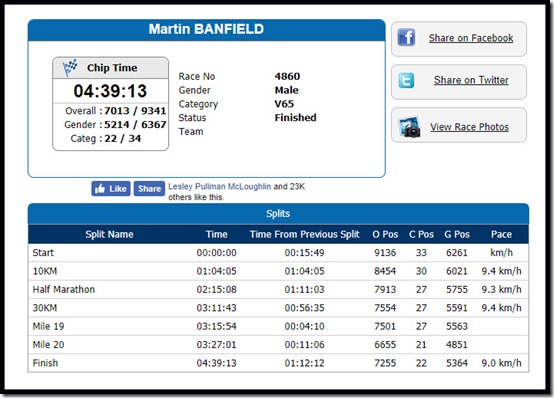 I bumped into a couple of parkrunners (below) who were queueing patiently for a massage, having cracked the four hour barrier. Well done lads, and well done to all the others we know who finished – especially Ken, nearly half an hour ahead of me, and dentist Mark and railway John, who finished 4th and 6th respectively in the 60-65 category, nearly an hour and a half ahead of me. 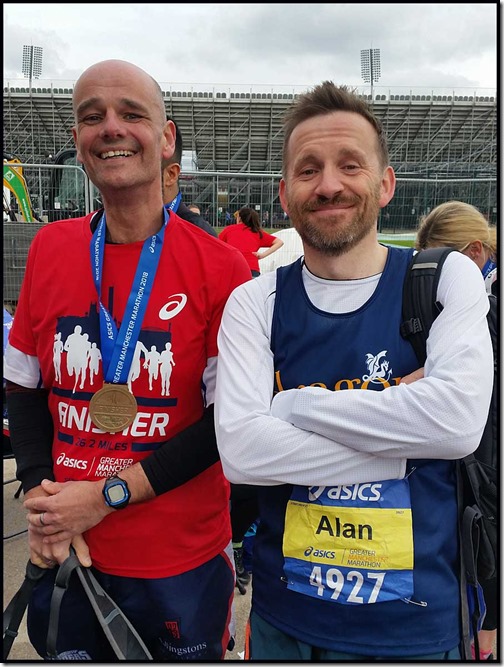 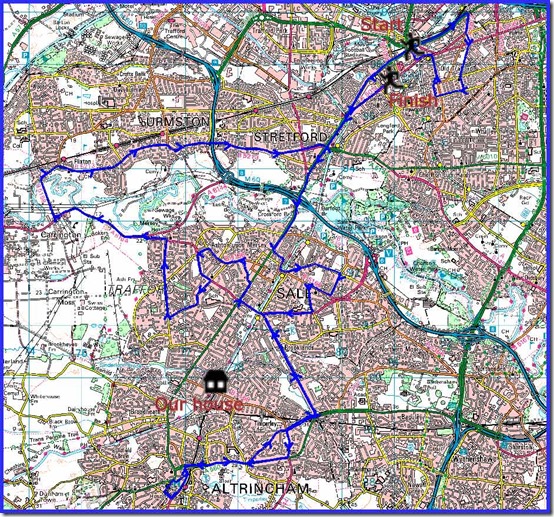 Just for the record: 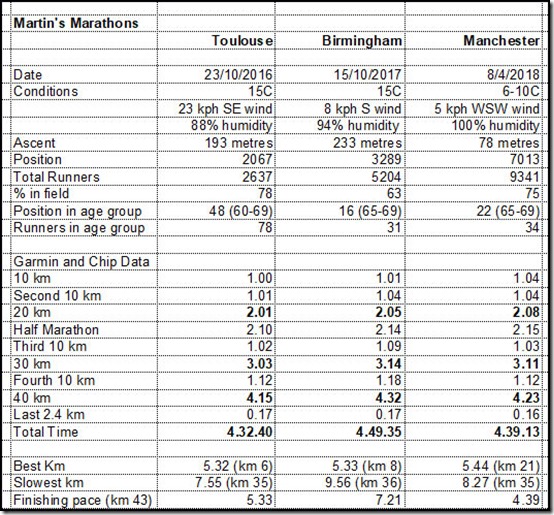 Starting slowly certainly worked well. I managed to run all the way for the first time, and from 30 km to the end – the hardest bit – this was my quickest time.

All in all a brilliant event in perfect conditions. That’s all for now, pending further edits, as I want those who have donated to be able to read this report. As I write, some £995 has been raised for Levana, so the £1,000 target will be reached. Many thanks to all who have donated, including Roger – for a bonus that I don’t really deserve. The JustGiving page remains open…