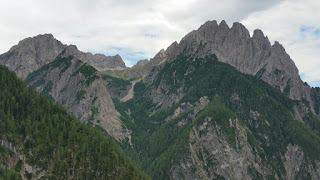 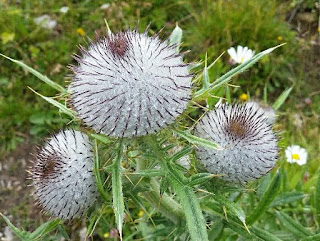 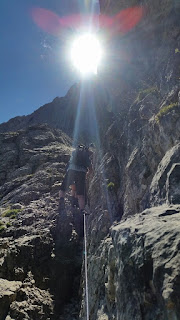 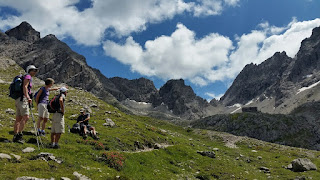 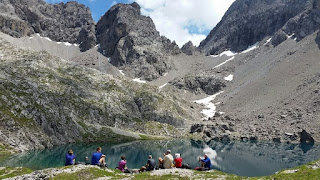 A group of 13 of us drove up to the Dolomiten Hütte, situated in a wonderful spot at 1620 metres up a toll road to the south of Lienz.

Sylvia was left to potter about whilst the rest of us headed steeply upwards at a brisk pace with frequent pauses. We were accompanied by Jo and Ben of the Collett's staff. Ben only started his job this week, straight from Uni. He's doing fine and can't believe how lucky he is to be working in this mountain environment when many of his friends are stuck in offices.

Some wires on the 'protected path' aided us up to a minor col with fine views on another day of good weather after rain in the night. We passed a salamander that appeared to be in the process of being eaten alive by ants.

Heading on up to the Karlsbader Hütte (2260 metres), John and Claire took an alternative route via a short via ferrata. The rest of us continued over steep ground to reach a driveable track leading to the hut.

Lunch was taken by Laserz See, a small lake with good reflections, then Graham, Sue and I strolled around the lake whilst the others adjourned to the hut for beverages.

A lovely path across a scree slope provided the start of an increasingly steep descent back through woodland to the superbly positioned Dolomiten Hütte, where refreshments were taken indoors due to the threat of a storm that dissolved into sunshine.

Some stunning mountain scenery there Martin.